An early start proved to be beneficial yesterday, as Bob and I had one of our most memorable days on the water together. We have been fishing very hard, putting in a lot of miles seeing incredible country, getting outside every day, but having limited fishing success. And no matter what anyone says the goal at the end of the day is to see a few good fish in the net. We were up nice and early and made a stop for coffee before continuing our hour or so drive to the river. The clouds were low lying and its was muggy and humid and dull. We started up the river and realized how low the water was and questioned our decision to fish that day. We are truly optimistic people and wanted to push on but had not seen a fish in over an hour and at one point Bob offered the idea of turning back. I told him I think we should push on and after some discussion we decided to continue for another hour. I was ahead of Bob and came to a caribbean blue pool about 15 feet deep. I immediately saw our first fish of the day swinging back and forth at the top of the pool happy as hell. I told Bob to come have a look so he waded out in the water and started to set up for this fish when all of the sudden the fish spooked and started to swim straight downstream at him. This fish was swimming fast for sure and we wrote him off as a spooked fish. I kept my eyes on the top of the pool and saw another eating aggressively and told Bob to set up for him. At this point he had his fly in the water stripping out more line to make another cast. Out of the corner of my eye I caught a glimpse of a massive shape swimming behind bob upstream towards his fly. I yelled at Bob, “Watch your fly!” He barely had time to strip in and lock off excess line with his trigger finger when a massive 8 pound brown gulped his dry fly in the middle of the deep pool! What an experience it was to hear that fish eat off the surface! It sounded like a toilet flushing it was so aggressive! 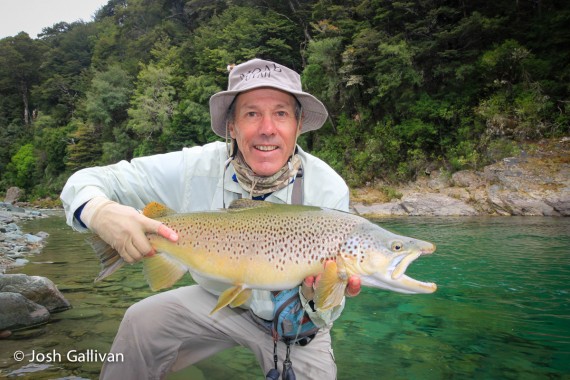 After a great fight we took a few pictures and released this fish and took a few deep breaths and hugged. After re rigging and walking ten steps upstream we saw another big fish feeding at the top of the pool and I told Bob to cast. His fly landed right on the fishes head and the fish almost did a back flip to eat it. He missed the fish and I suggested we slow down and fish slow and not get too excited (which is very hard for me to do) and keep a cool head even though 25 inch brown trout were eating dry fly”s all around us. At that moment I saw another fish at the top of the pool and took Bobs rod to make a cast as he was rigged with the right fly. This 6 pound Brown swam across a fast current to smash my dry fly!

This all happened in a matter of 30 mins and we were pleased with our decision to not turn back. We pushed on and hooked and lost a few fish and I continued to see feeding fish for the next hour. We couldn’t walk 20 steps in the river without seeing another big brown trout swinging on the surface destroying big bugs. The most memorable fish for me came towards the end of the day when I spotted a fish in 12 inches of very calm clear water. This fish was in a beautiful position and I moved in behind his lane and stripped line off my reel. After a few false casts I had the right distance and landed my fly a few feet above him and to his left. At first I thought the fish spooked due to my loud landing of the fly but instead he swam at my fly and literally lunged at it on the surface to eat it. It reminded me off all the best gamefish in the world, GT’s, Bonefish, Tarpon, Smallies, and I was happy to have Bob there to witness it all happen. After a good struggle this 9 pound Brown came to the net. 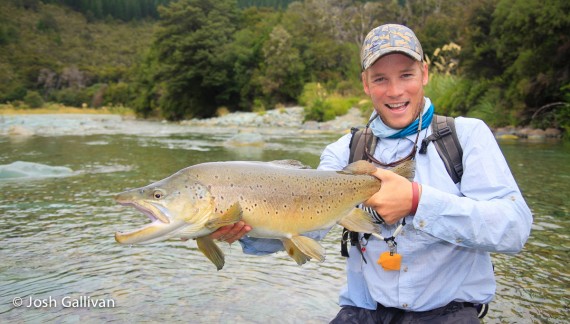 I thanked this fish and took great photos and some video while we released him. The visual aspect of trout fishing in NZ is incomparable. To watch a 26 inch 9 pound fish swim up to eat your fly from the surface is a beautiful thing. And the reason I come to New Zealand year after year. Our day ended with one more nice fish which Bob caught and released of course. This 6.5 pound fish was also in a foot of water. 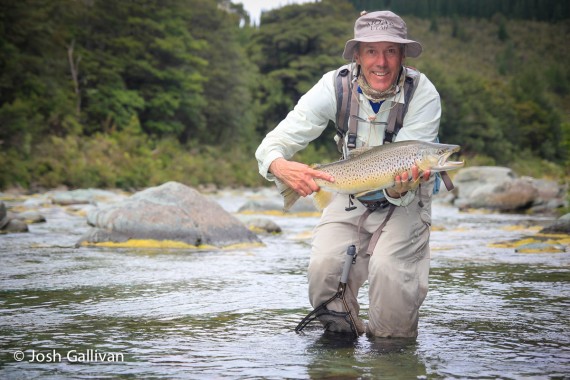 Our lesson learned that day : Stay optimistic! You never know until you wake up and get out of the house (tent) and put in some effort.