Today was not a friendly day on the Red Sea off of the coast of Sudan. We had a kick ass breakfast, with kick ass coffee, with my kick ass friends, in a kick ass corner of the world. But as it turns out, today would kick our asses and test our allegiance to the art of getting after it. 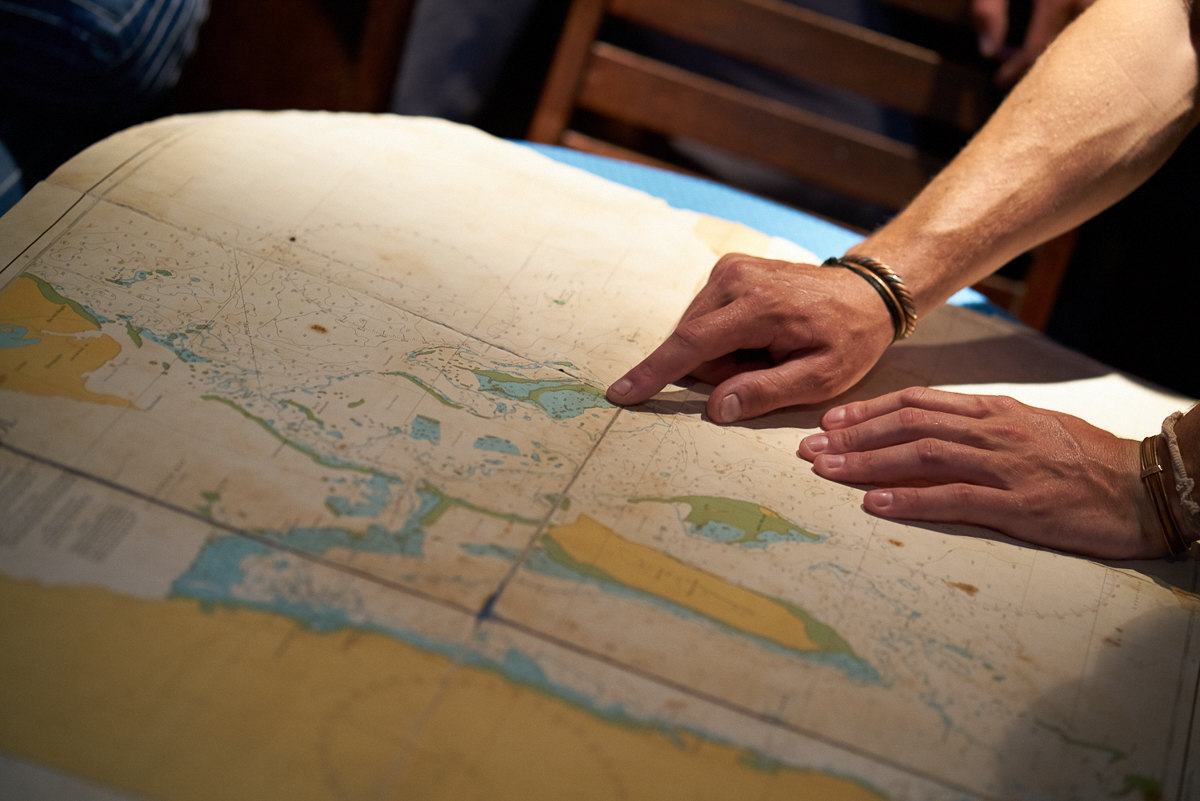 We made plans to set sail for a new area where we were told we would most likely get rap-ed by GT’s on the drop offs. We pulled anchor and attempted to head North for one foot island only to be thwarted by a ceased engine. Now keep in mind we are literally in the middle of now-here at this point and when things go wrong they can become big problems fast. Luckily our guides and boat crew had a meeting and decided that we would make a run for these tiny islands in the tenders and when the boat crew and captain fixed the mothership they would reunite with us after lunch. So we loaded our gear in the small boats and made sure to bring plenty of water (gallons upon gallons) and I made sure to bring my pro bar for the day (the best energy bar made). We were headed into the heart of darkness at this point and I didn’t know when we would see the mothership again but I knew we were going fishing so it didn’t matter. We pushed off from the other group and motored on. Finally a bit of a breeze now as this was by far the hottest day yet and there was nowhere to find shade. Twenty minutes later our engine started sounding funny and finally it took one breath and gave up. So there we were, in the middle of the Red Sea, floating above 900 meters of hot saltwater, not a breath of wind to be heard, and a glassy ocean all around us. Luckily the other boat spotted us bobbing and came over to sort out the problem. After a bit of a troubleshoot the boys got the engine working and finally we shoved off a second time with our little one foot island as our destination. 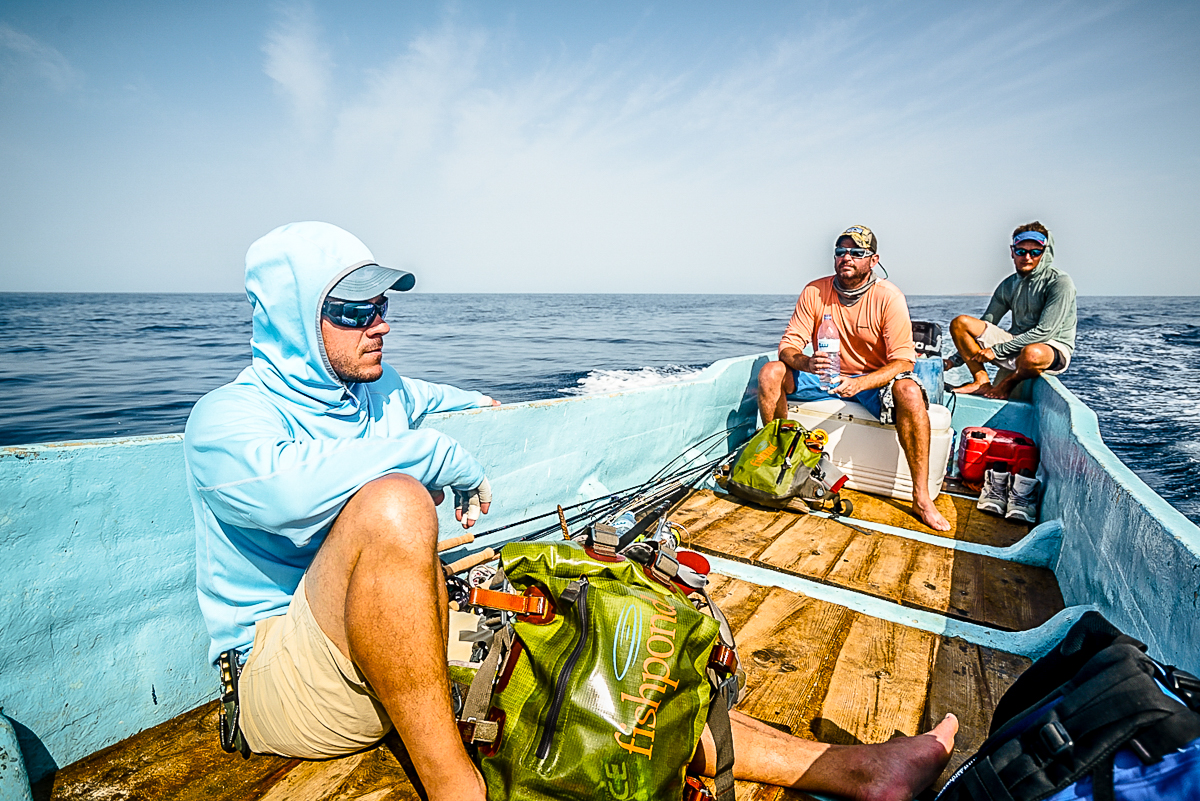 As we approached our deathly oasis I could make out a few objects strewn around the island. As we got closer I saw 7 million plastic bottles and a refrigerator. I thought that maybe someone had an incredible party there at one point but came to my senses and realized that local fisherman just use it as a trash dump. I swear no matter where you go in the world you see either a plastic bottle or a flip flop or both. Humans are so disgusting. 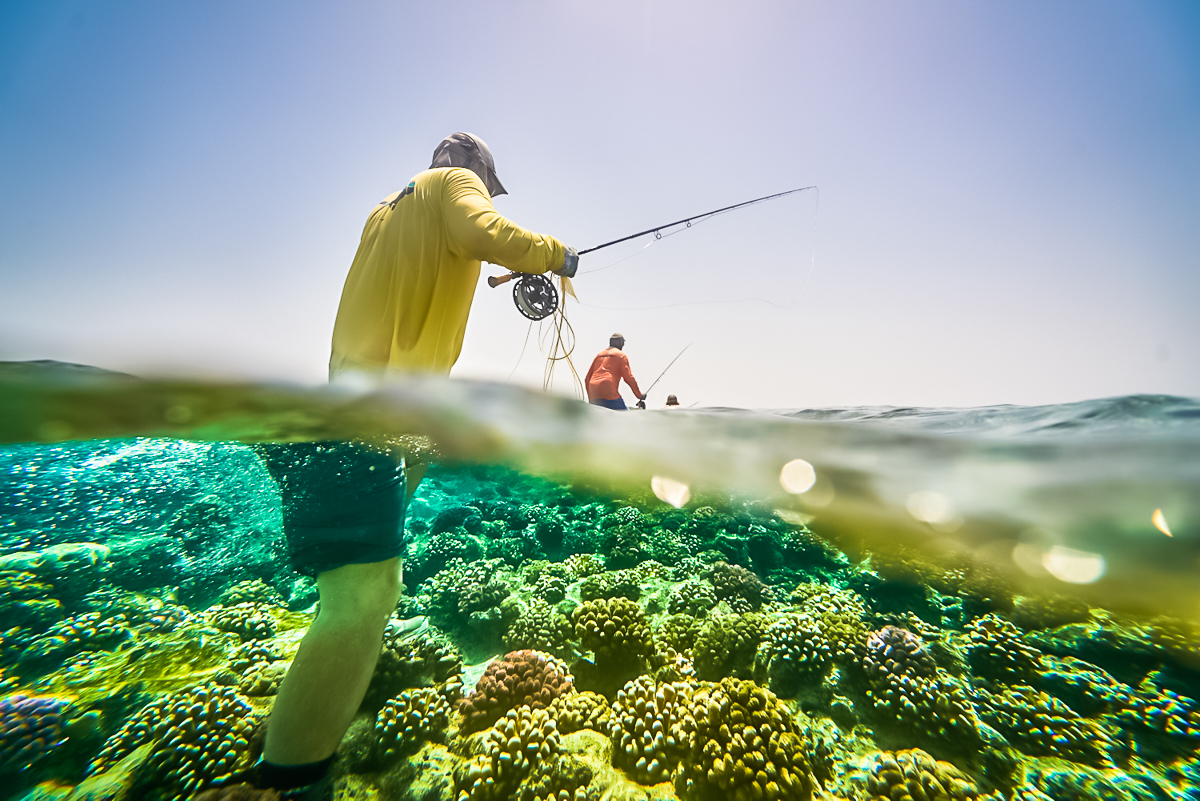 I was lucky to be fishing with Michigan Mike and Matty today. And we were all so lucky to be accompanied by our South African guide Stu Hartley. The point of today was to catch our first GT of the trip. Our little Island had no flats on it and was a true coral pinnacle in the middle of the Red Sea, with some sand. So we lined up and Stu breifed us on what to expect from the first 3 teases and said, “When I cast it, they will come.” So we said a little prayer, stripped out 25 feet of our 100 pound core fly lines, tightened down our drags all the way, took a deep breath and saluted eachother. Stu tossed the teaser over the edge and into the depths and began retrieving fast. As the teaser came in over the edge he pulled it and we landed our flies as the replacement. We started stripping like mad but nothing showed. We reorganized and stacked our line as Stu threw out a second tease. As soon as it landed madness ensued. I couldn’t believe my eyes and gulped as a school of ten GT’s were porpoising behind the hookless teaser with their backs out of the water. They were trying desperatley to catch up to it as Stu reeled it in fast and steady. I could see dorsal fins and protruding foreheads and angry eyes and big pushes of water as the GT’s approached. As Stu was yelling “Get ready!” I saw them enter onto the flat. I could make out their shapes now and started my one false cast. I landed my fly in the heard of angry bison and began stripping as if my life depended on it. Then I saw what looked like a VW bus turn sideways and eat my fly. I saw everything at that moment. I saw his gills flare as he inhaled my fly and a gallon of water. I saw his black color on his back, I subconciously saw Mike and Matt both hook into a monster GT right next to me. It was like we were in the fox holes together, It was like we were storming the beaches together. I was tied into this GT for an instant and as he sized me up I was doing the same to him and he was basically at my rod tip. I pointed my rod directly at him almost as if to say, “Let’s do this” and strip set again to drive the hook home. While I strip set a second time I felt a tremendous snap as I literally watched the fish swim away while my fly line fell through my rod tip. I had a weak spot in my fly line. My heart sank into a million dark holes as I choked on my tears. I looked to my left and Mike and Matt were still doing battle with their Geets so I immediatley snapped out of it and started cheering them on and offering encouragment. Seconds later Mike’s fish went on a big run and Mike just couldn’t stop him. He was doing everything right keeping his rod tim down low and to the side, fighting this fish with every ounce of energy he had left. Mike’s 12 weight was doubled over and bent to the cork when the fish finally made it back over the reef and shredded mike’s fly line. We were both out of the game now and all three of us were cheering on Matt who was hooked into a much more manageble sized GT. He did a superb job keeping the fish from the edge of the reef and started walking back to the island. Moments later Stu was able to tail this beautiful Giant Trevally. 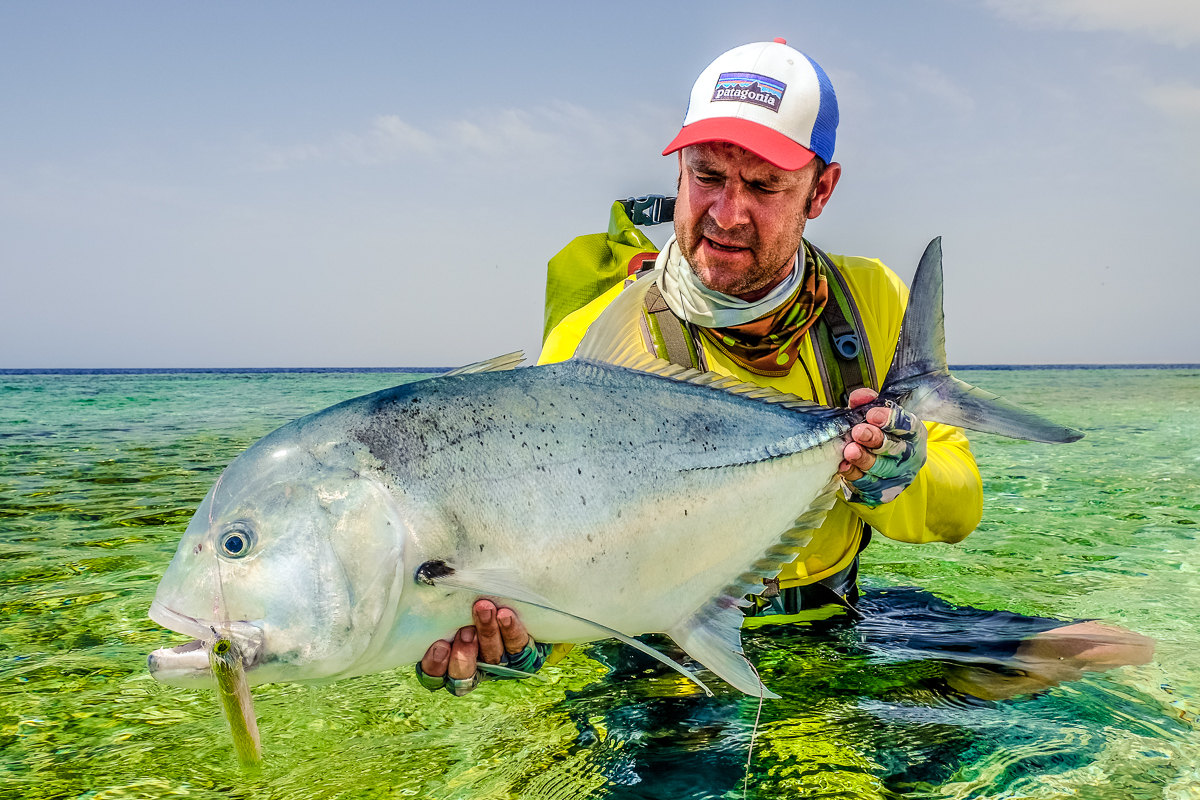 Congrats to my good friend Matt Rice for winning the battle with this amazing GT!

We sat it out for a while. I replayed it in my mind over and over again. I desperatley wanted to turn back time more than ever. That will never be possible though, which is lifes greatest lesson. 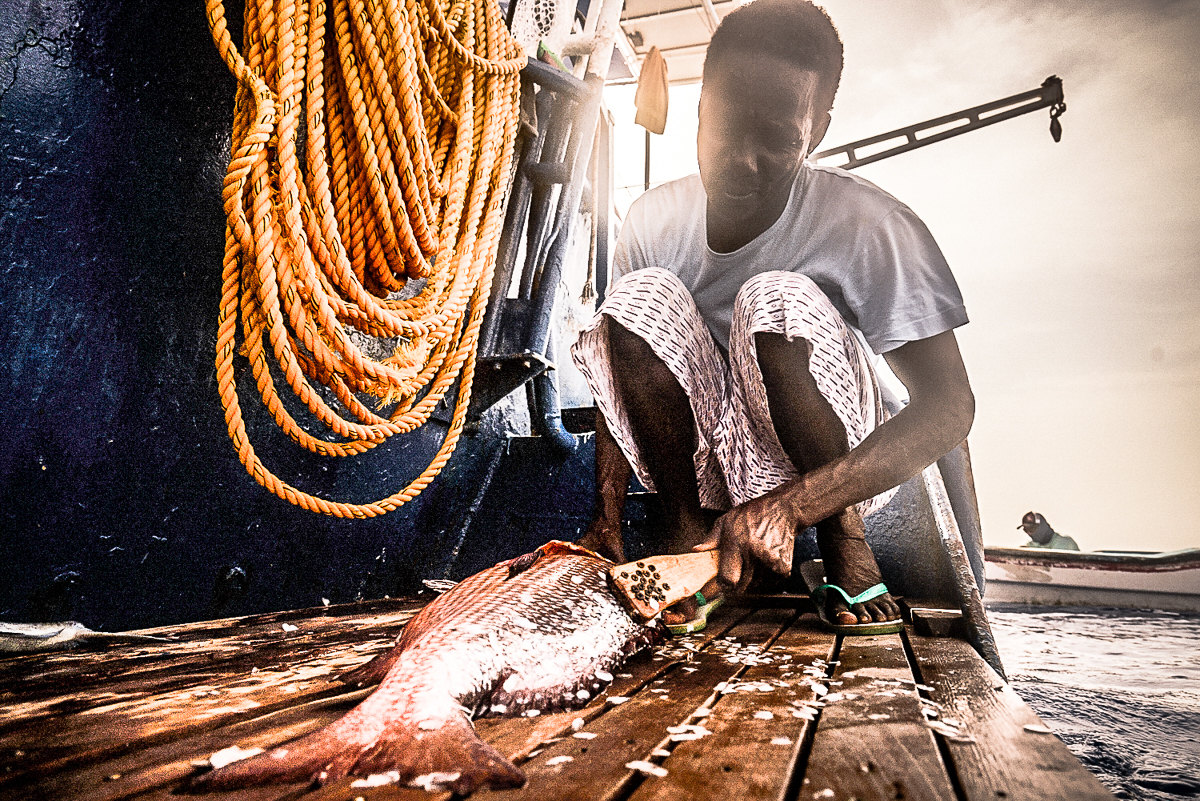 That night we had an incredible time telling stories and reliving the day. Our boat crew put on an incredible feed for us that night which included a freshly caught snapper, local rice and goat cheeses and local flat breads. Matt and I did manage to have a late night fishing session and jigged these monster batfish up on bread flies… 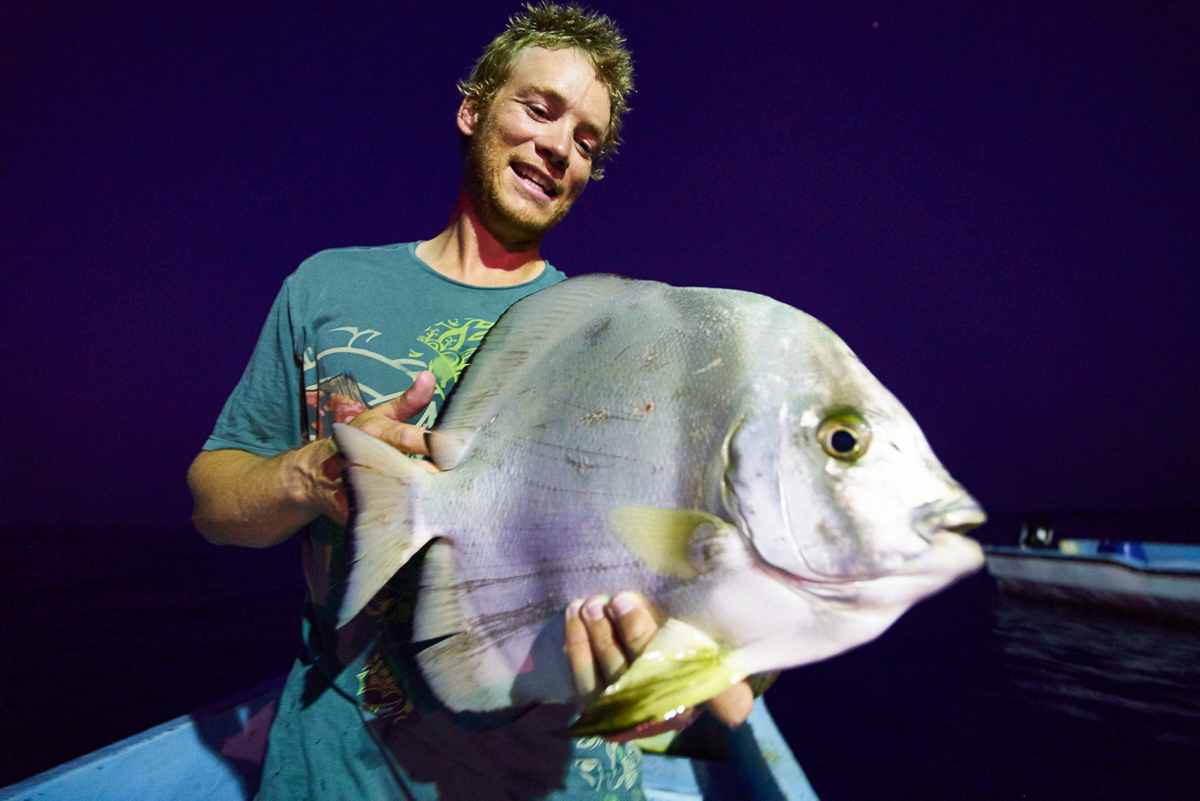 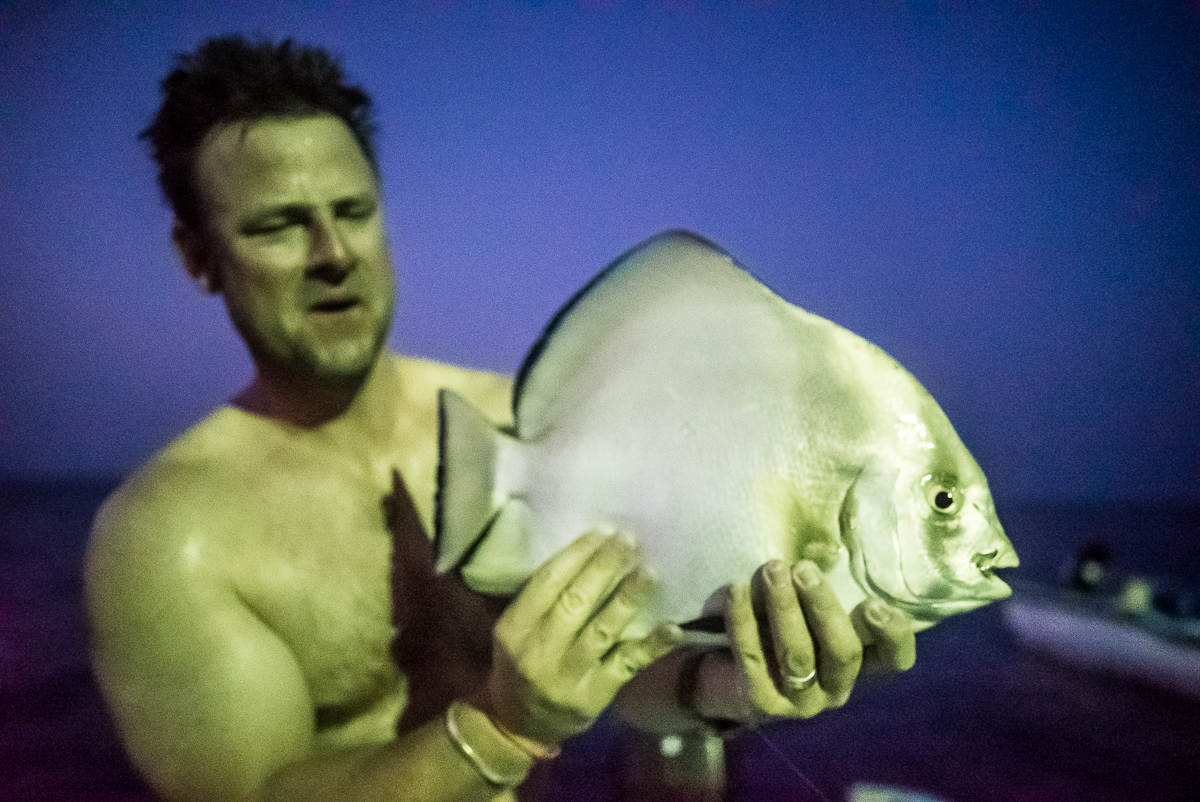 What an epic day! Thanks to Tourette fishing for showing us the time of our lives in Sudan!