I had the chance to fish to some of the most elusive and weary carp of my life recently in Phoenix Arizona with my friend Ryan Russell, owner of Arizona fly fishing adventures. What’s great about Ryan and this story in general is that I had never met Ryan before. Furthermore, a quick search on Facebook told me we had mutual friends and with a look even further I learned that Ryan is a true carp guru, dedicating his fly fishing passion to the thousands and thousands of miles of inner city spillways and carp ponds that Phoenix has to offer. Urban fly fishing at its best.

I decided to write him with hopes that we could connect and hopefully go fishing together. Ryan wrote me back immediately with a complete itinerary of our two days together. It was shaping up to be an incredible journey to the middle of the Arizona desert and who knew, after all isn’t life and fly fishing what you make it? 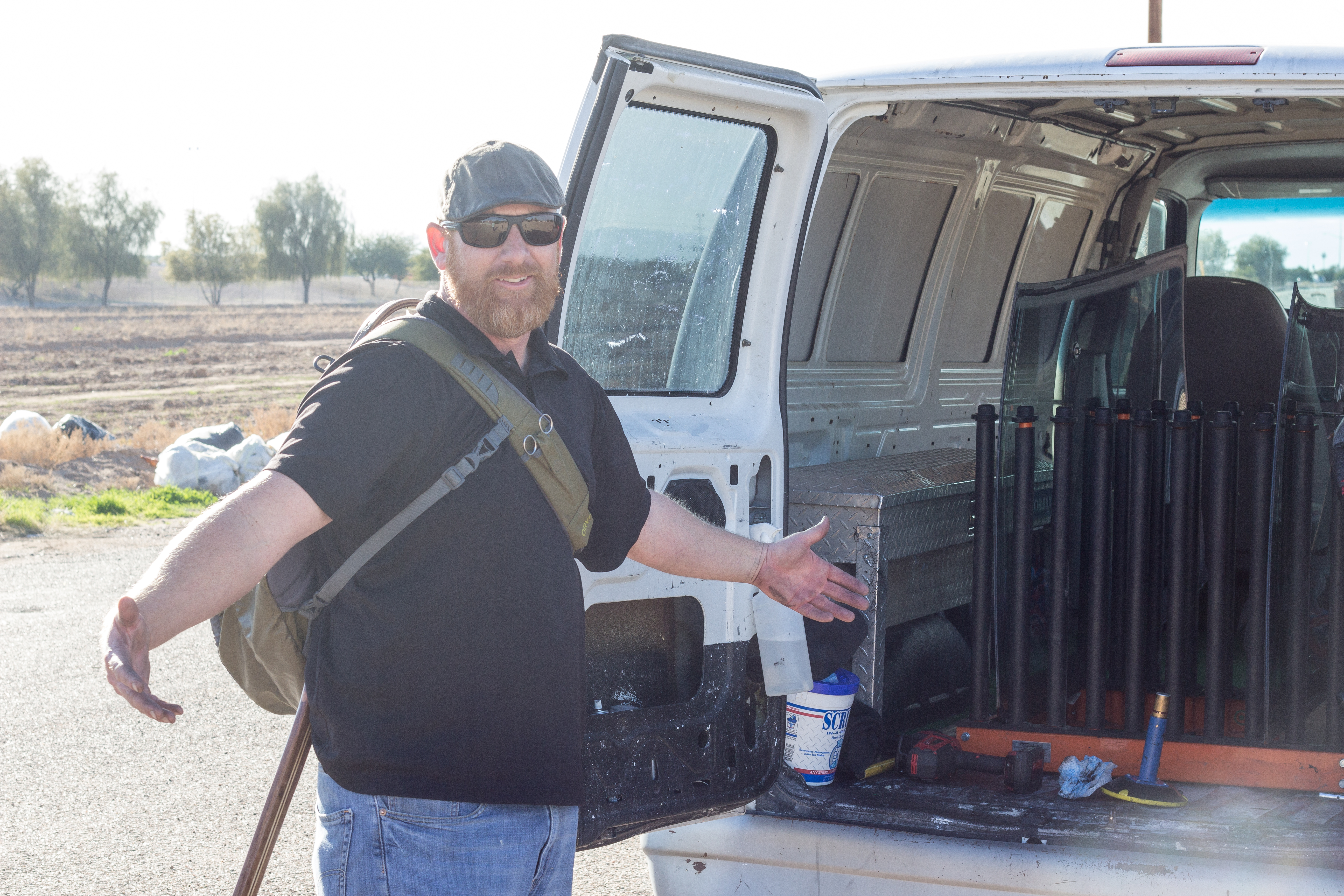 Ryan and I found common ground immediately when he picked me up. Fly fishers don’t have time for the small talk stuff so we cut to the chase and I was learning a great deal about his life, and his family and his passion for guiding and fishing and carp. Ryan had a few tough years where he found comfort in fly fishing. He decided to start guiding but use his love for the sport and love for teaching in a different way. Ryan has a full-time job and business installing windshields and doing auto body work, so he sees fly fishing as a way to connect with people and hopefully guide someone into turning their life around. Ryan prefers to guide for only donations as he notices the therapeutic effects of the sport greatly outweigh the monetary benefits. 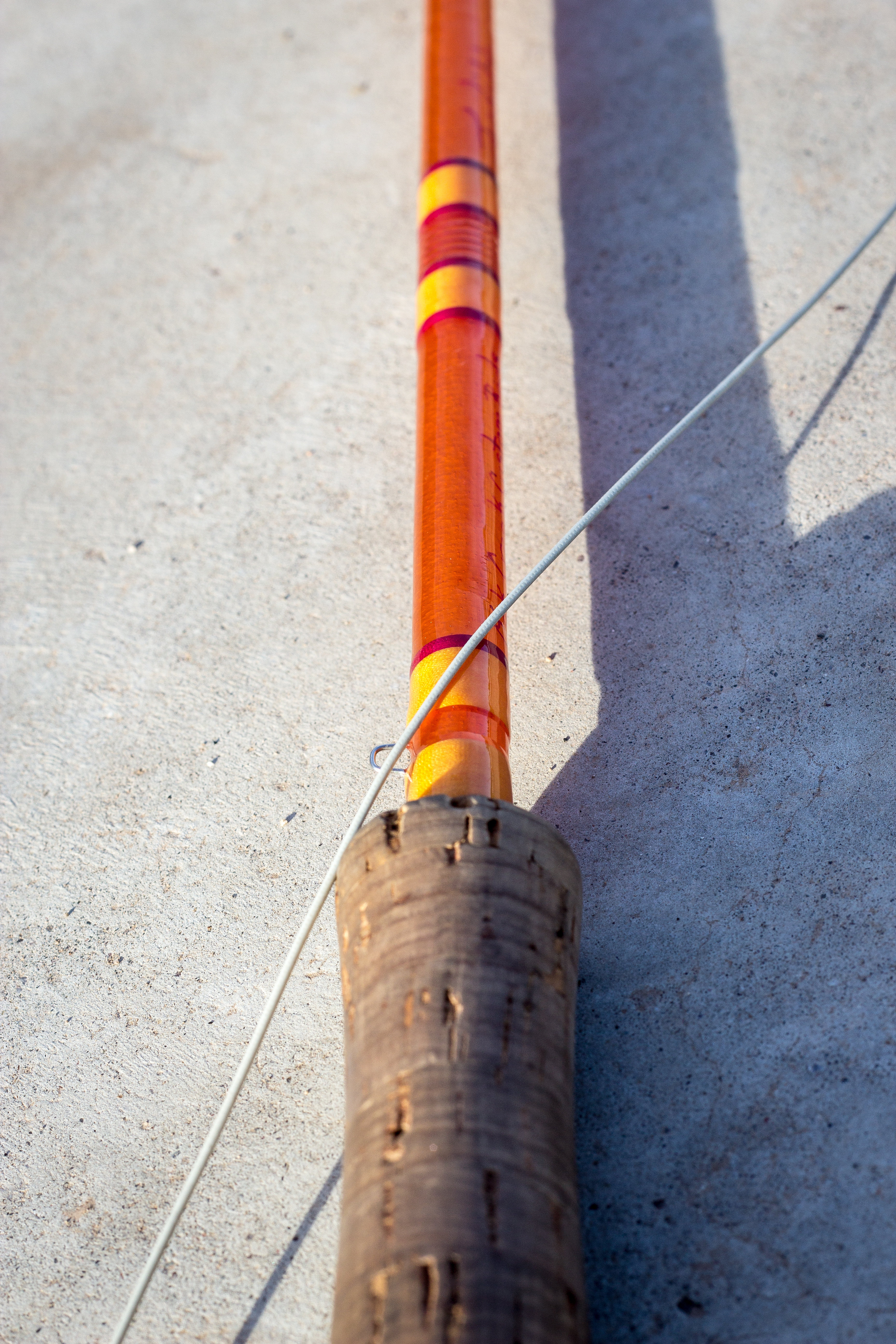 Glass is not dead, in fact it’s all Ryan will fish with as it has the most supple feel and discreet presentation.

Ryan and I drove through the city for 45 mins before we came up on a dirt parking lot at the end of a long road in a residential area. We then walked through somebody’s yard and found a bike path that led us to a spill way with flood gates and lots of cement and you get the picture, we were going urban fly fishing.

I immediately saw a monster grass carp just hovering in the still water while bikers and dogs just meandered by. It made my stomach turn as I din’t have a fly rigged up yet. You think I would learn my lesson by now. Its good form to have your self rigged up and organized before you get to the water. Ryan and I walked “downstream” for a few minutes and realized the water was too low and the storm drains are set up as a sort of loch system so we went back upstream and started seeing lots of fish. It was an urban assault of sorts. I started seeing small mouth bass, big “Goldfish” that I later learned were koi, grass carp, common carp and mirror carp, not to mention the numerous bikers and joggers that happened to smash into my backcast from time to time. It was a spectacular event and I even wrapped my fly around some barb wire behind me and broke it off. I was trying to do my Belgian cast the one that Tony Entwisle taught me in New Zealand but kept clipping the power lines and fences. It was hilarious, and meanwhile there were so many fish cruising it truly was like bone fishing. I spotted a big brute coming at me, hovering next to a tire and a garbage bag, this fish was a true bad ass making his home in the tired storm drains of the city. I casted and laid my fly line out softly. I was fishing a chartreuse leech so that I could see it in the water and I crab walked the fly right in front of this fish’s face and he followed it slowly for a good 5 feet. I thought for sure I was going to see his gills flare and an inhale but he spooked and took off. These fish were tough but the visual aspect of it was more than enough fun. 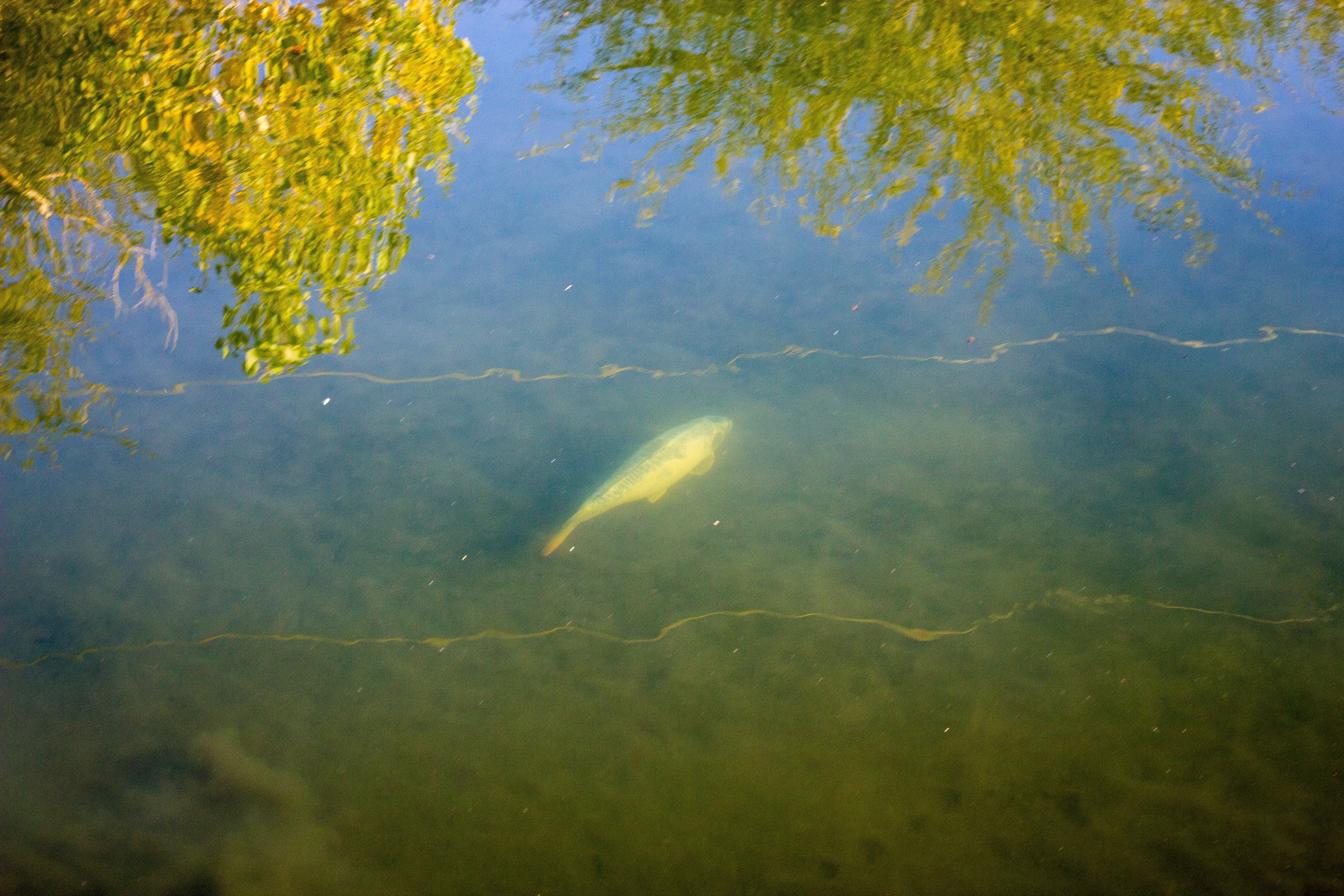 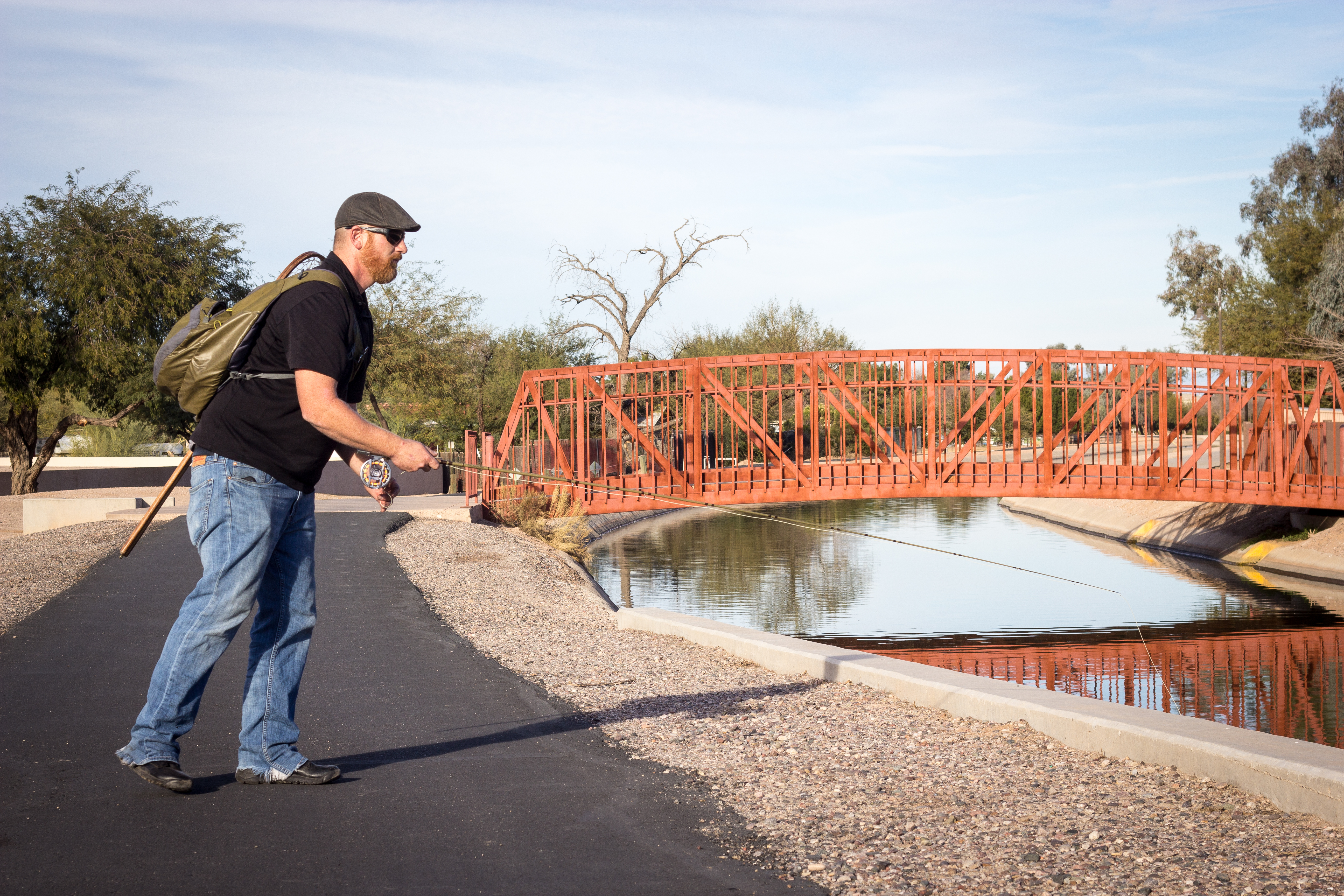 Ryan was working up ahead and we were loosing our light. I had about 20 shots at carp and we were almost to our bridge where we would eventually turn around. I knew I had to make it happen here and when the next grassie came at me I made sure to play my angle correctly to ensure my fly was in front of its face for the maximum amount of time. I stripped the fly a bit faster and came tight. I started hooting and hollering and Ryan came running to take a picture. Meanwhile all the Phoenix yoga mom’s were looking at me cross eyed as they didn’t know people fished in those cement ditches. I can only assume they thought I was taking it home for dinner as they walked by. After a few head shakes and a little run this grass carp was in the net! 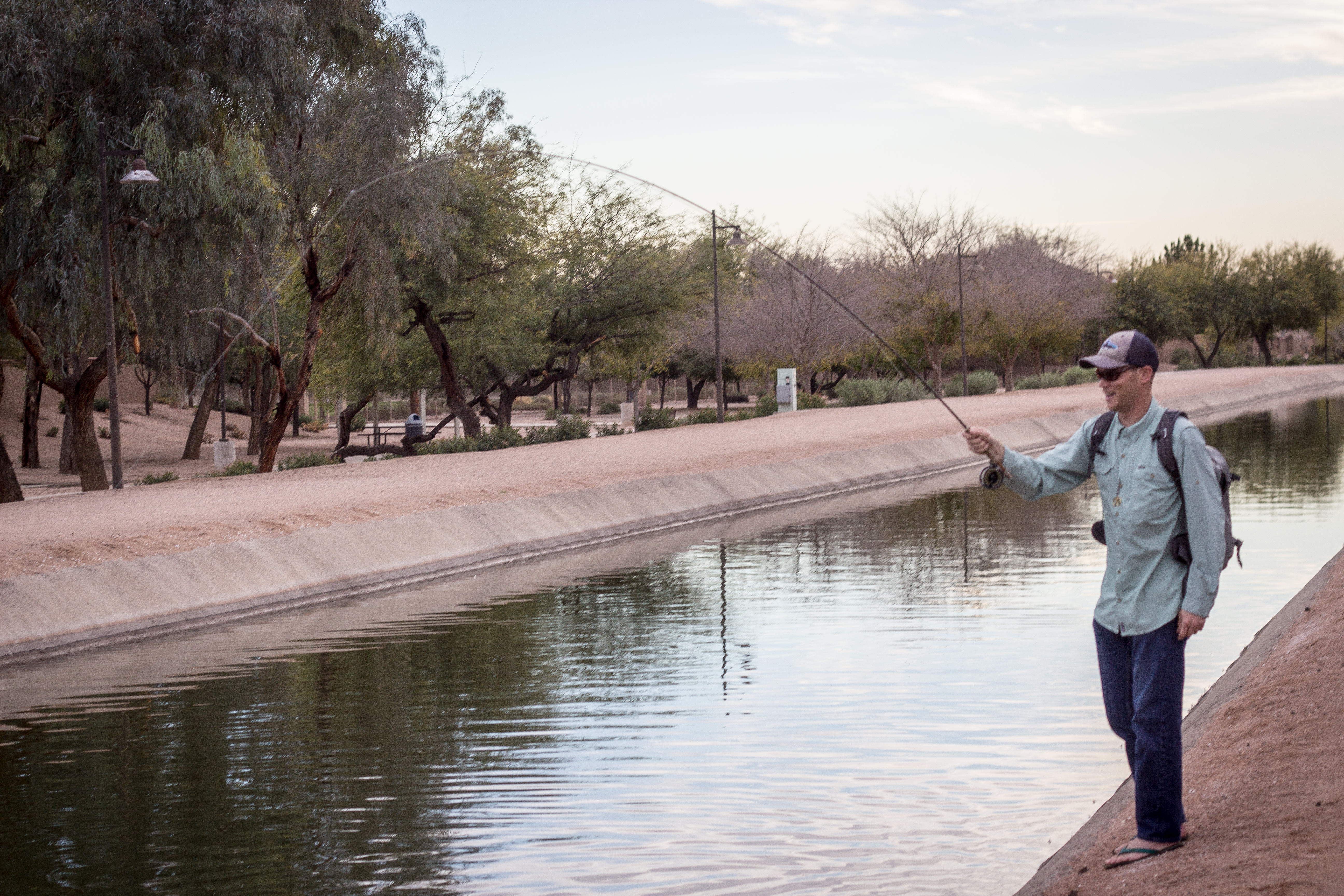 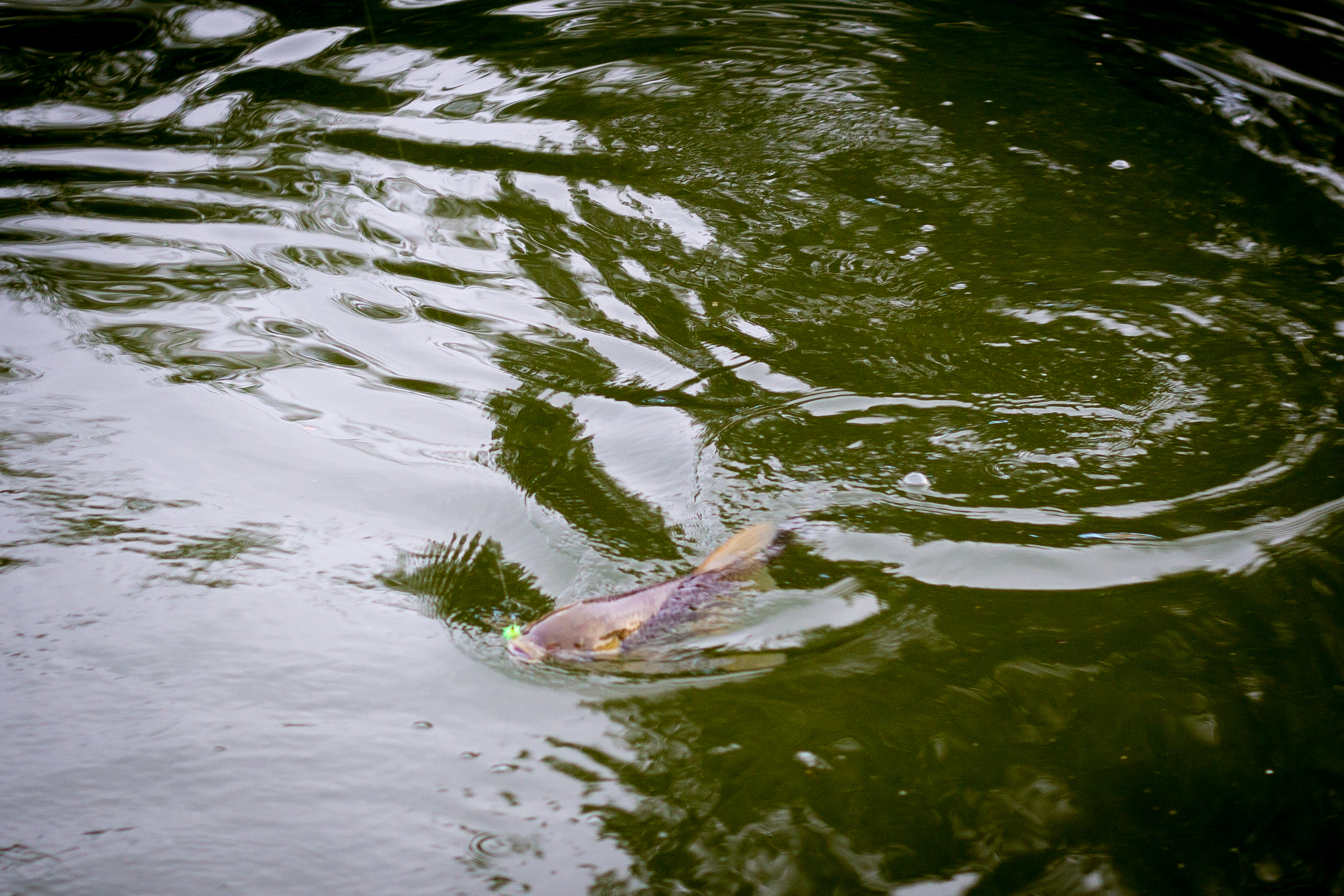 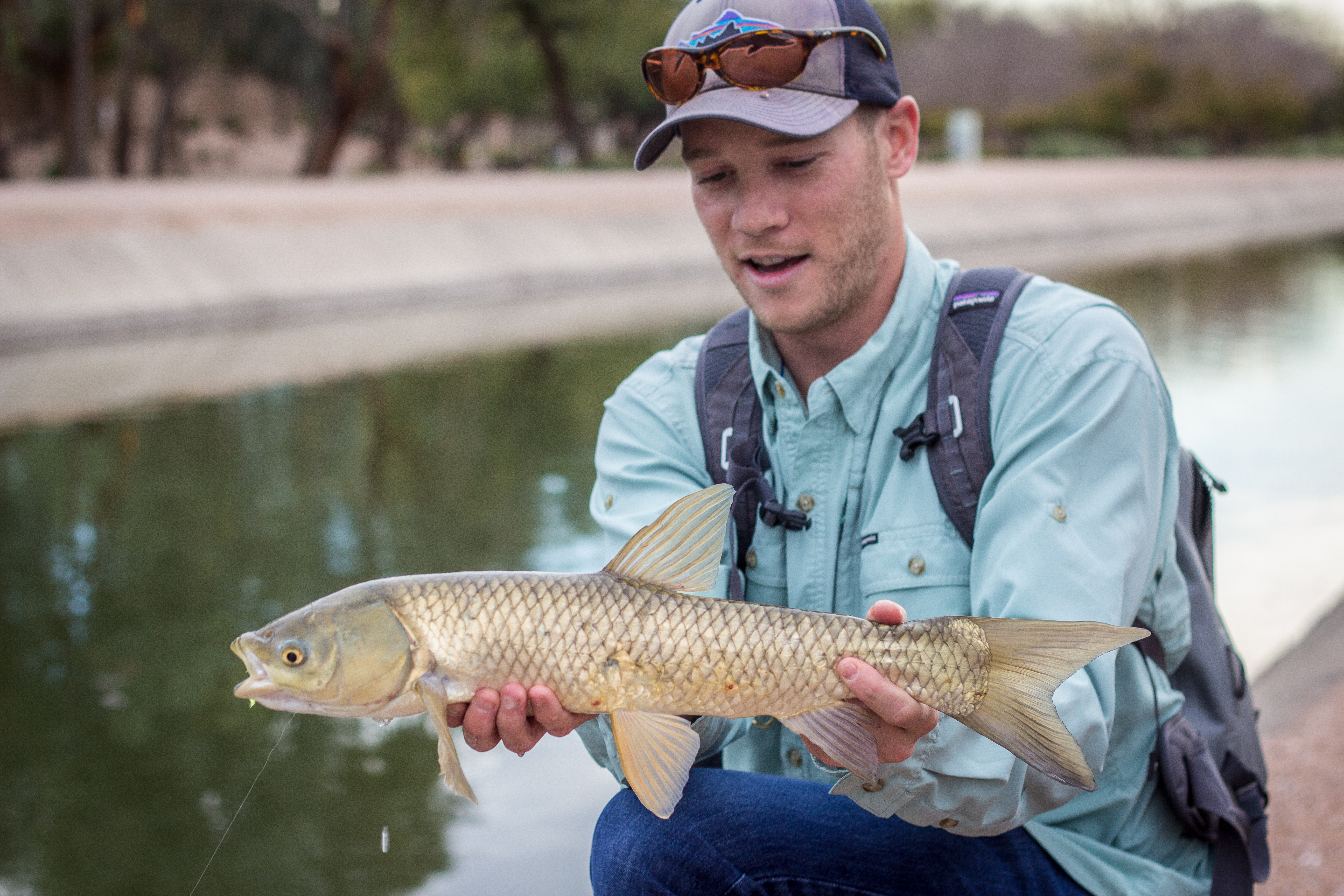 Our day had come to an end. Ryan had a local watering hole in mind so we went out and had a few drinks. I had to be back to have a big dinner with friends so Ryan dropped me off at my hotel and we made plans to fish again the following day. 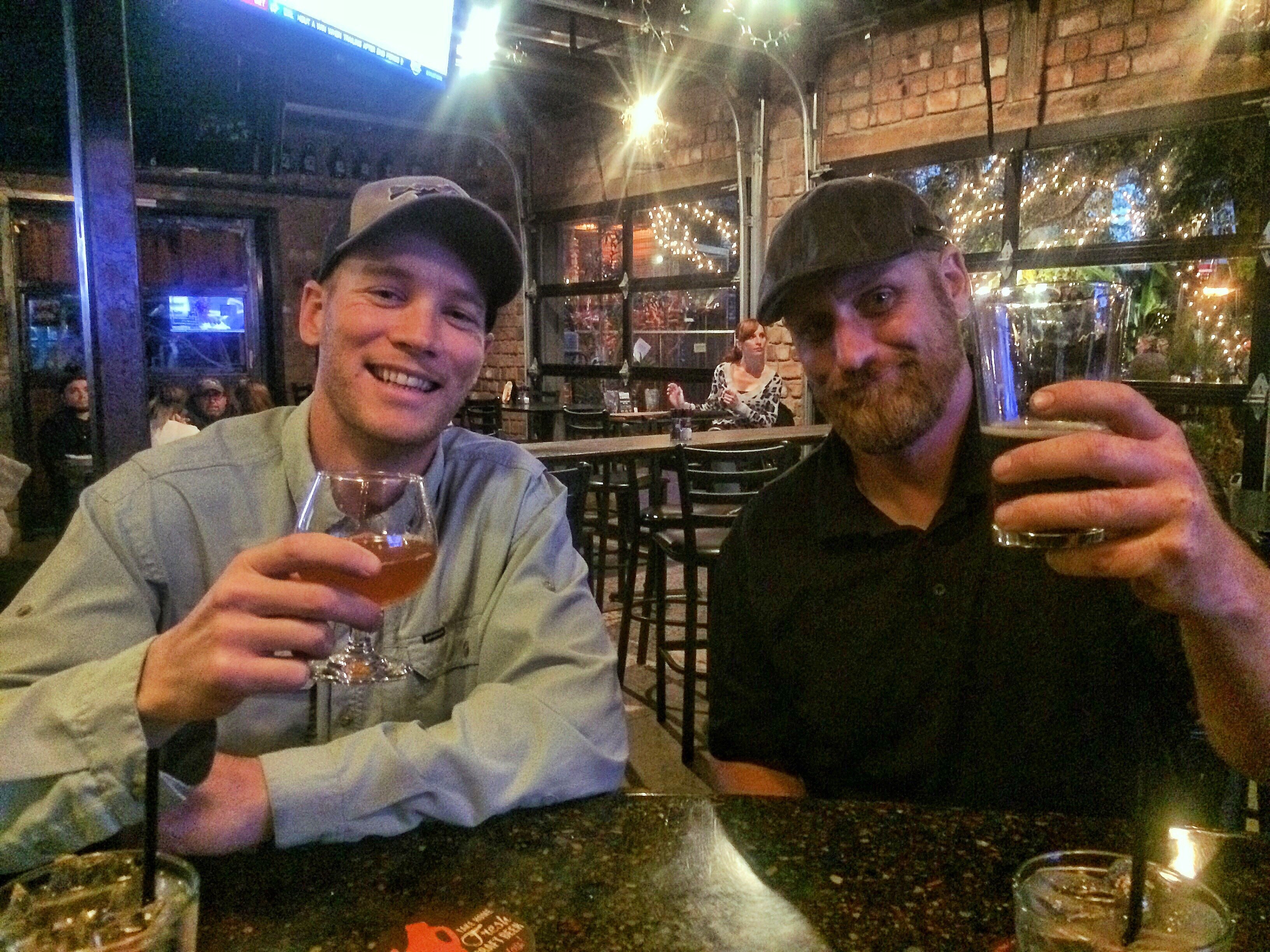 The following day we only had a couple hours to kill so Ryan picked me up and we went to one of his favorite ponds tucked away in a little neighborhood. It was the most Un assuming fishery ever. It was a beautiful evening and the sun was setting over the motherland (the desert) and there were pit bulls barking at us from the back yards as we walked by chasing tails. I came across a gate that I could climb up on top of sort of like a casting platform. The visibility was so good from up there I could see fish coming from my left and right. I thought I was making perfect casts but the fish were not interested. As we slowly walked around the pond we saw a lady sitting on her deck. After talking to her we learned these were her pet fish that she throws cat food to at sunset. Unfortunately we didn’t have any pet food or pellet flies so we decided to have one more look at a nearby pond and call it a day.

Im starting to wonder what is in my own backyard that I have overlooked time and time again. I tend to fish a lot of the same waters because I know they are consistent and I enjoy them. I like certain bends in the river that I have caught quality fish at. I remember certain stretches of river where my guests have caught incredible fish at. I know what is out there that I have yet to explore. And as I write this up here at 30,000 feet on my way to the Louisiana marsh to chase redfish for a week, I remember a conversation I had with Ryan over a beer. Money aside, its cool to use what resources you have in front of you. Fly fishing is what you make it. While I am a proponent of traveling to the far corners of the earth to fly fish, I admire the people who are at home on their favorite bend on their favorite river casting and casting while the troubles of the world close in on them. There are still those that choose to fight it and smile in its defiance. After all, he/she who fishes the most has the most fun, and he/she who has the most fun wins.