My first Sheepshead on the fly

It was hard to beat yesterday all together. Yesterday was one of the most exciting fishing days I have ever had. It was so good in fact that today you couldn’t help but feel as if the fishing was going to suck. Jim and I approached our first big mud around 9 am. We were anxious when we neared it as I know what can stir up muds of that size. We weren’t seeing anything though, which made me even more anxious. Right about at the same time Jim and I noticed we had screwed up. We were approaching the mud from the wrong side so we were working into the mud, and the redfish would be at the top. All of the sudden we started spooking fish left and right. The current and tide that day was so slow it was hard to determine where the top of the mud started and where it ended. We soon realized our mistake and didn’t have a chance at a fish for the next two hours.

We thought we were cursed for the day so we cracked a beer and had lunch. Lunch today was from Penny’s and was sort of a Po’ boy turkey sandwich. We were pulled over in a beautiful cove where we were hiding from the wind. The flat was stretched out before us and I was barefoot. All of the sudden, while I was taking a bite of my sandwich, a group of reds swam right out in front of us on the white sand flat and I was able to put my sandwich down and make a cast. The leader of the pack turned on my fly immediately and ate. I set the hook and started hollering. I jumped out of the boat barefoot and played this fish on the sand. For a minute I thought I was on the beach in the Bahamas the water was so warm and the sand was massaging my feet. Luckily this red fish was on the smaller side and I was able to land it on my own while Jim took pictures from the boat. 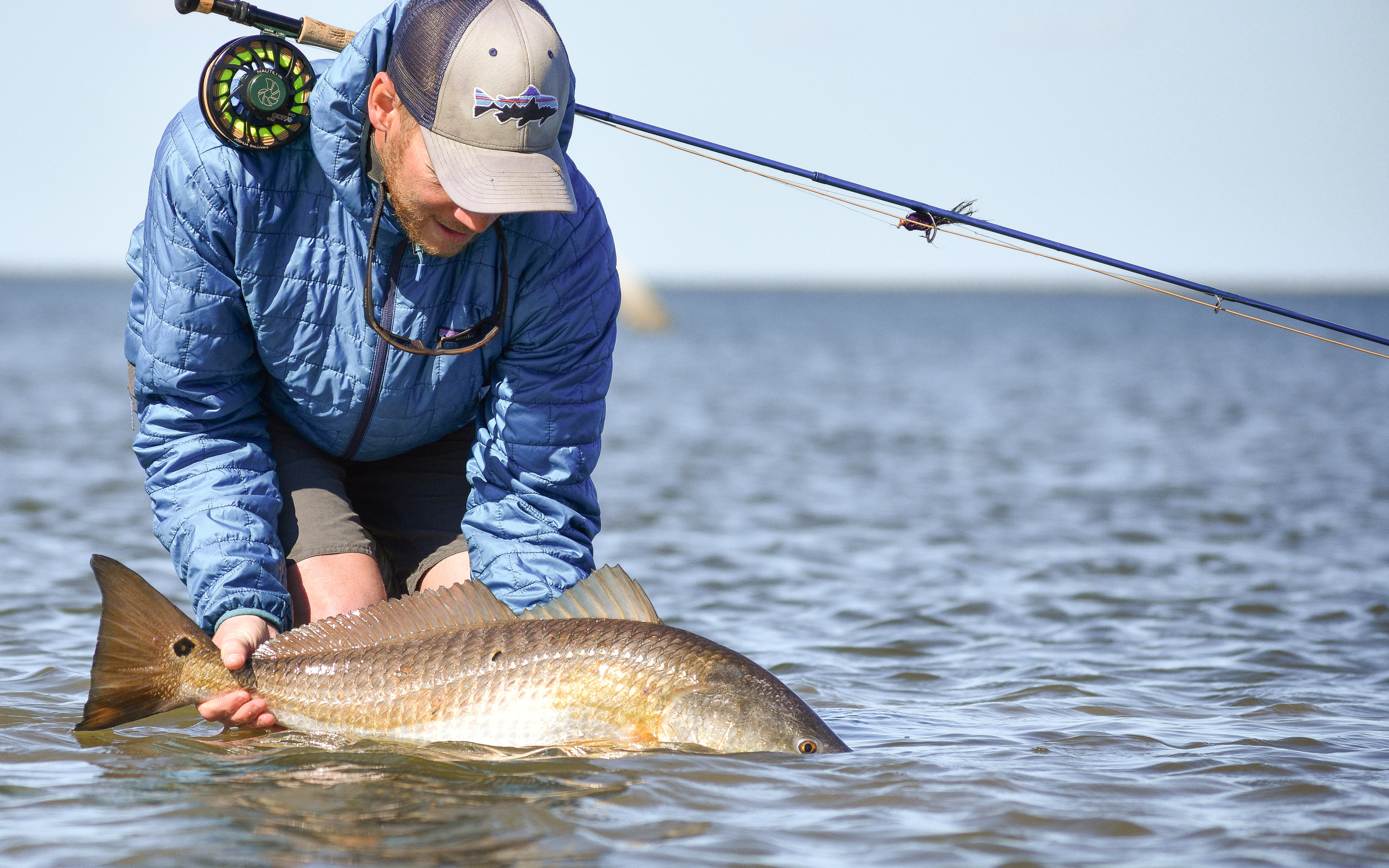 One of the coolest eats ever as we were hovering in the white sand and this fish just showed up in front of us. I was able to jump out and fight this fish barefoot.

That moment reminded me of a story last year when Tony Entwisle and I had the most amazing flats fishing in New Zealand. We stumbled across these kingfish that would come on the flat within casting distance of the road. And as the story goes, you never know what will happen in fishing.

Jim and I had used up all of our good luck it seemed. After lunch we didn’t see a fish for a few hours until we came up on another beautiful flat tucked away into the marsh. Now we had seen sheepshead quite a bit during the last few days but never really targeted them since there were so many red fish around. I saw one feeding though, and it reminded me of a permit the way they feed and they are quite tricky to present the fly to. I tried anyway and casted my redfish fly at it and it didn’t move for it and eventually spooked. Jim offered the idea to actually try to target a few? So we cut the fly off and I tied one of my trusty olive Merkin crabs on and literally moments later there was another sheepie. It was hovering towards the bottom in only two feet of water and I could see it plain as day. I casted beautifully though and waited for it to sink and gave it a bump. Remembering back to my trip to Sudan last year fishing for trigger fish I knew I had to be subtle when fishing for a fish with big jaws and teeth. So I stripped but not too quickly, and let the fish sort of inhale the fly before I gave a more firm hook set. It worked and before I knew it this sheepie was taking line like a boss. I fought back and landed this beautiful sheepie, my first ever on fly! 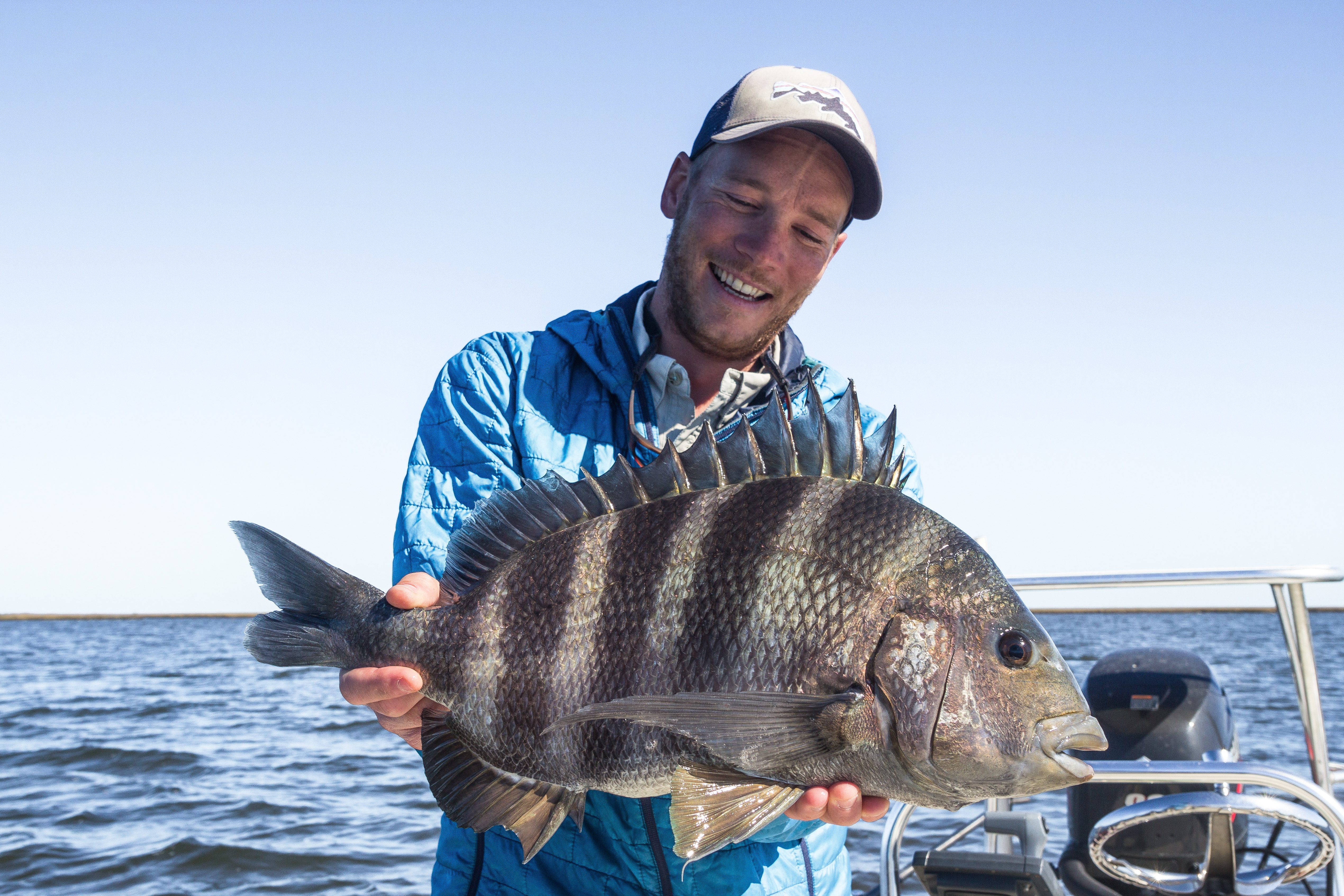 These sheepshead are a very tricky flats species that require precise casting, delicate presentation, and an intimate knowledge of marshcraft

Thanks again to Captain Jim Dietz of Mountains to Marshes for hosting me during such an epic week together. I’m excited to announce he has invited me back for the Sheepie fly fishing tournament March 4-5 as his guest angler. I can’t wait to get back to the Marsh! 16 other teams will be renting a house boat and staying on the marsh for two nights. It’s sure to be a rowdy time indeed!

Stay tuned as Jim and I got a last minute invite from a good friend of mine to join her in the Florida Keys! More stories to come!