It all started on my friend Patrick Joy’s lawn in Northern California earlier this year when we were decompressing from his wedding standing around in the sun drinking coffee and smoking cigarettes but sadly, going our separate ways. We were all so happy about the long night and longer weekend and didn’t want the fun to stop. Someone mentioned the idea of all traveling the world together (haha). Someone else offered the idea of just hopping in the van and driving to South America (yah right). Someone finished their cigarette, kicked the dirt and said, “Should we at least try to make it to Panama?” I thought about my fascination with central America and decided that if the group made it to Panama in that van, I would have to join. So there we were three months later in Panama City and I was fresh off of the airplane. I had just spent four days in Chicago partying with good friends, followed by a fun two day layover in Atlanta Bass fishing. The group I was to be meeting up with had navigated Southern California in an old dodge van, then south into Baja, took the fairy over to mainland Mexico, navigated most of central America with the craziest stories and finally picked me up in Panama City. They were hardened from long days navigating foreign lands, they were fluent in Spanish, their skin was tanned and happy. To them, it was the best of times, and it was the worst of times.

So there we were, driving back into the city from Tocumen airport when the Policia had us pull over at a checkpoint. Our van looked like it was a cartel rig used for shuttling drugs, guns, money or all of the above. The boys had left their passports in the hotel as they were only driving 15 minutes to come pick me up and that my friends, is a big mistake in Panama. Apparently, if you’re a gringo you need to travel with your passport on you at all times. So when they pulled us over I was the only one with my credentials on me so in broken Spanish/English we had to negotiate a deal with 3 cops armed with big fucking machine guns. Thankfully my man Dese aka “surewould” knows hot to broker a deal and used his Spanish perfectly and within 15 minutes he was joking with the cops and they were laughing back and forth saying “claro” and  “dale” etc. and I was just sitting there saying I’m from Wyoming and I’m a fisherman “con mosca,” (with fly) hoping that they would show pity on a lonely fly fisherman. For the first time in all of my travels I thought for sure I was going to have to pay a hefty sum to get my passport back as the cop that had my passport had now left the area with it and was showing if off to his amigos and boy I thought to myself, welcome to Panama. 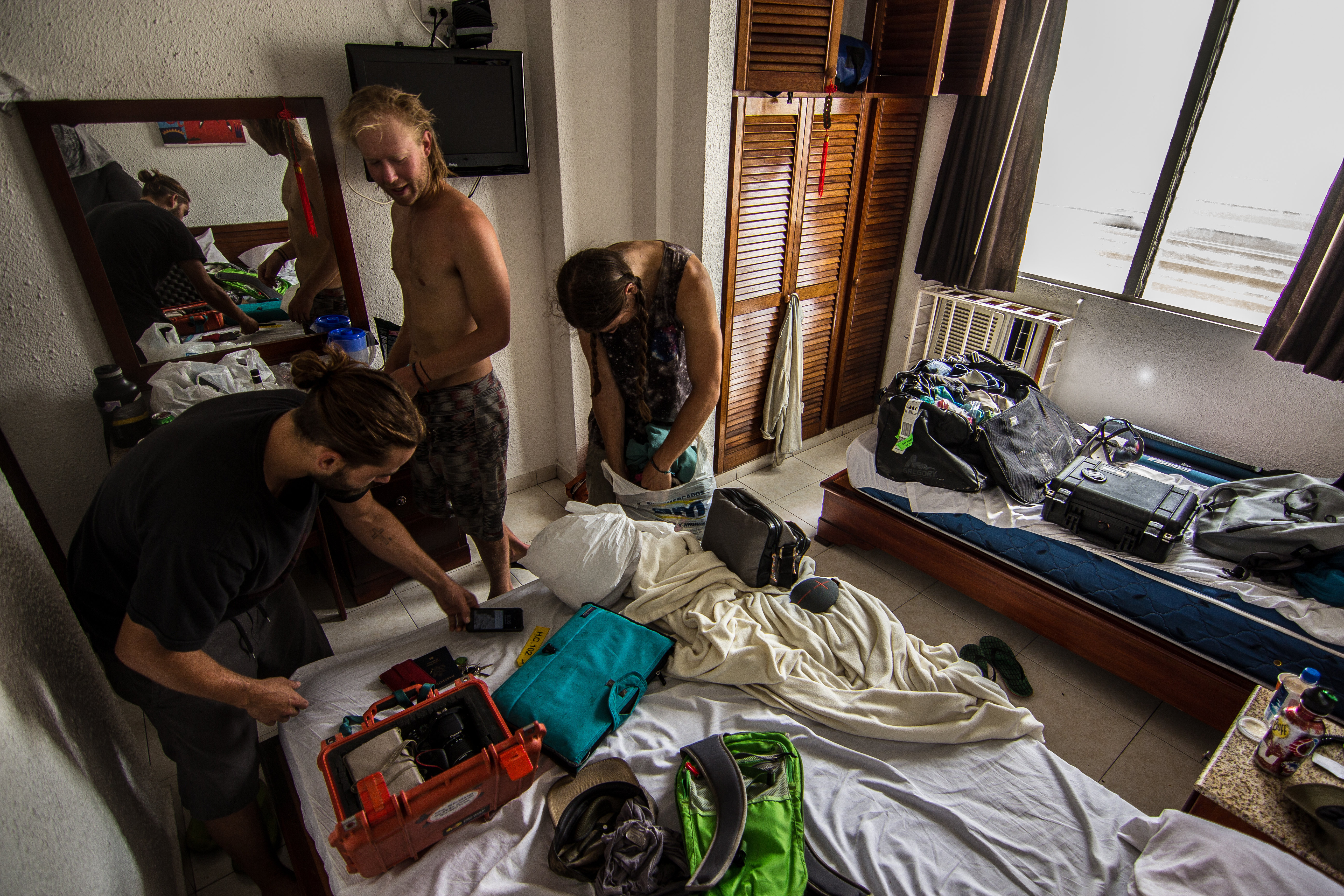 Packing up gear in a tiny hotel room in Panama City 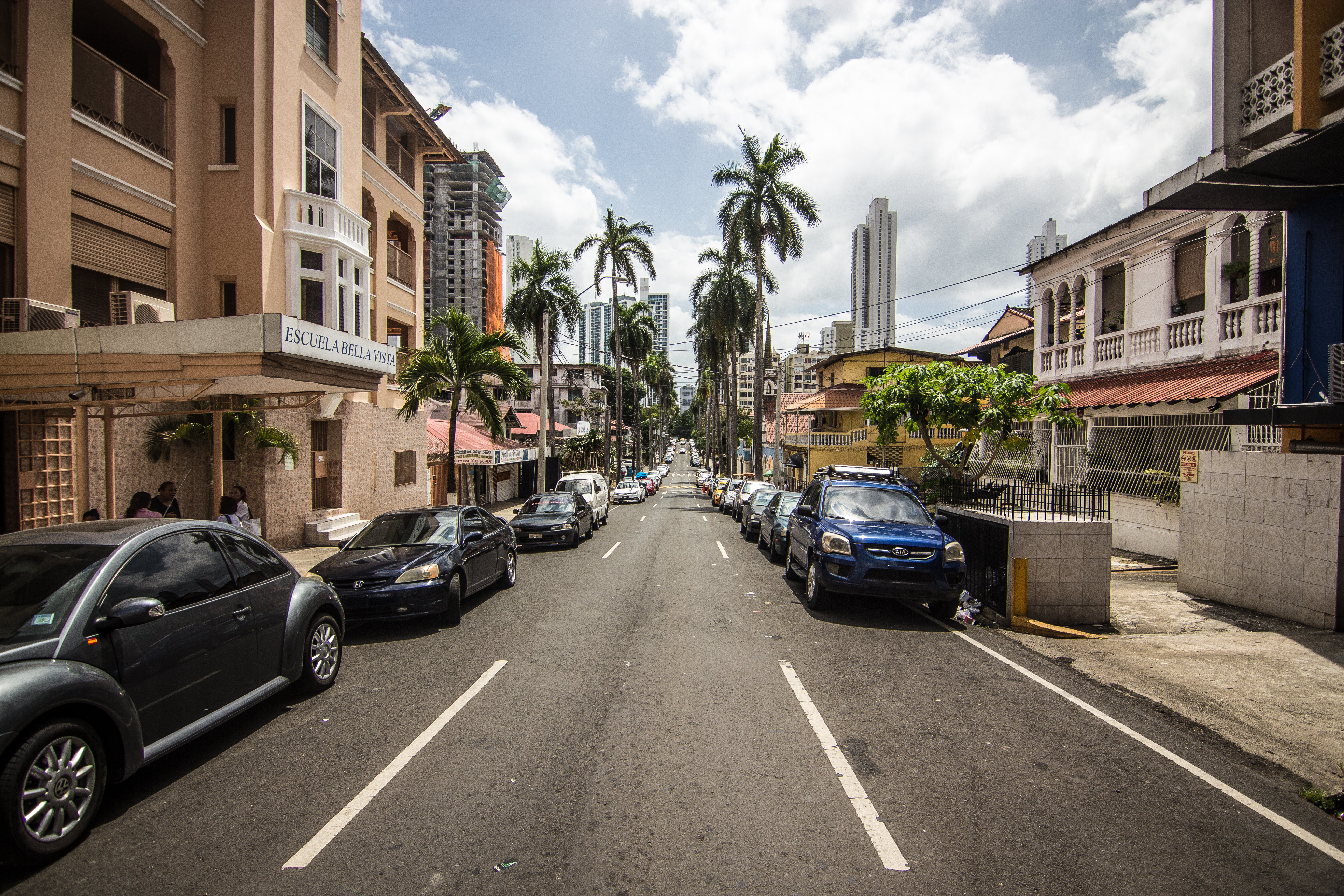 Panama City scene moments before we packed up the rig and headed out of town.

I woke early the next morning and ran down to a cafe and used my terrible Spanish to order 4 coffees and some delicious looking breakfast pastries for the boys. We slowly welcomed the world and packed up and headed for the nearest grocery store which was hard to find in Panama City with a big van and trailer in tow.

This trip was pretty last minute and I relied on a few fishing buddies to give me some information on fly fishing in Panama. My good friend and mentor Jeff Currier came through and mentioned places off shore and also some river mouths where he had seen Tarpon. My friend Mikey Wier fished in Panama years ago and mentioned more of the same. The more I listened the more I realized fishing in Panama for the adventuring angler is a blank canvas, and that you could get into some incredible action by just throwing caution to the wind and going for it. Lucky for me I had just jumped into the best situation possible and joined up with the most epic crew which I will introduce to you now. Desi Sherwood is a very likable guy with so many talents. He is an avid river runner and fly fishing guide in the far reaches of his home state of Alaska. Desi is a great addition to any group and he truly cares about the overall good of the group before himself. Not to mention Desi is an incredible skier and loves his life lived outside. Jeff “el hefe” Krizman is an old college buddy from way back. The most laid back, thoughtful, and caring dude around. Jeff is an avid fly fisherman and river runner as well and has done a bit of guiding on the Colorado river for trout. Jordan “Bear” Bolton is a wild haired firefighter from Colorado. The only person I didn’t know before this trip started, we soon became good friends when confronted with the harsh reality of travel in a foreign land. 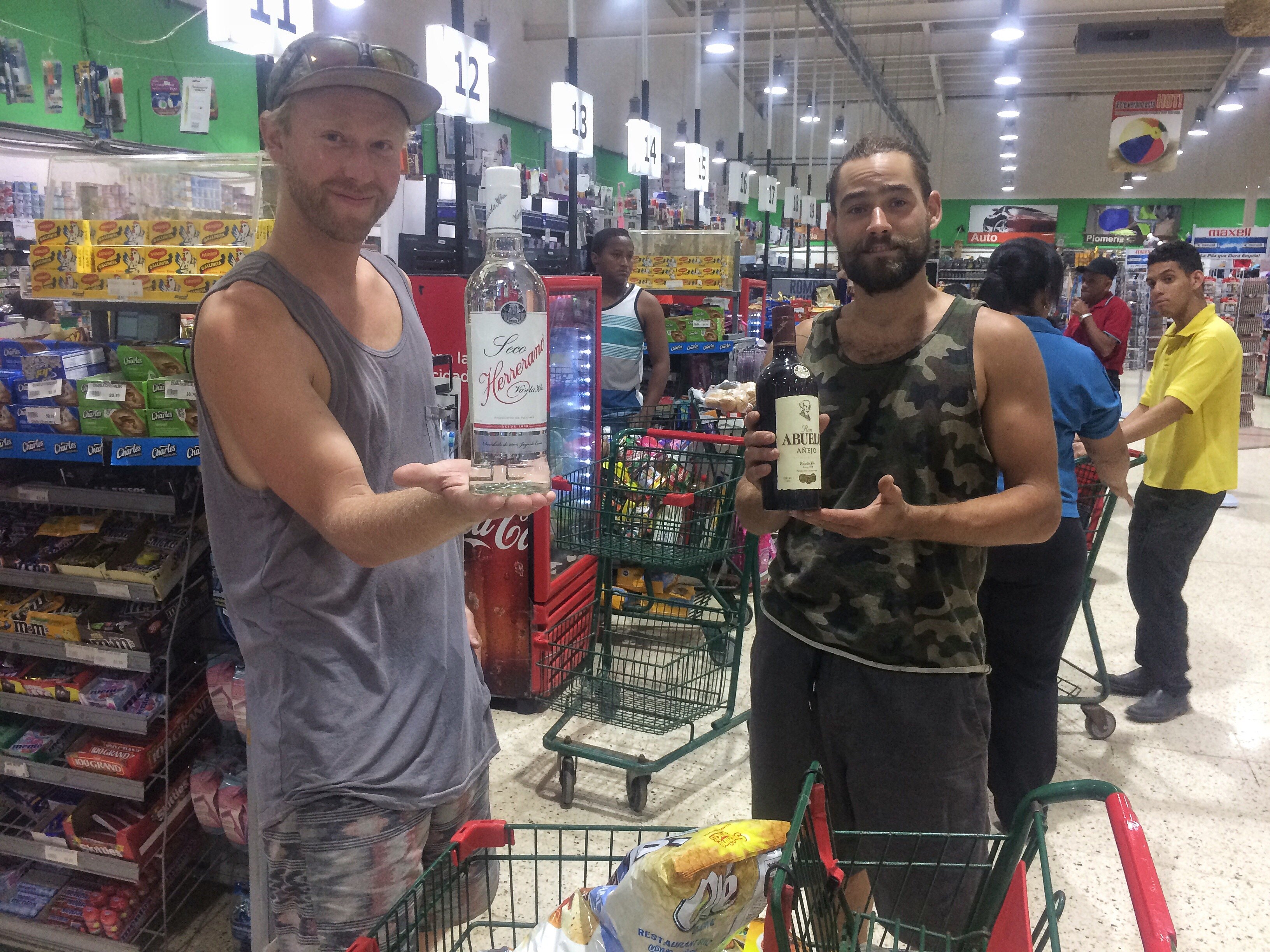 The hustle and bustle while driving out of the city and over the Panama Canal is something I will remember for the rest of my life. The chickens on the side of the road, the over loaded buses, and the rich countryside. The motorcyclists who could have given a shit about the rules of the road, the merciless honking of horns. It was the heat, and no air conditioning in the van, It was that vivid smell of burning trash in Central America. It was also the fact that we were going fishing and getting away from it all. That sense of adventure is a feeling that I have grown to love and try to keep close by. 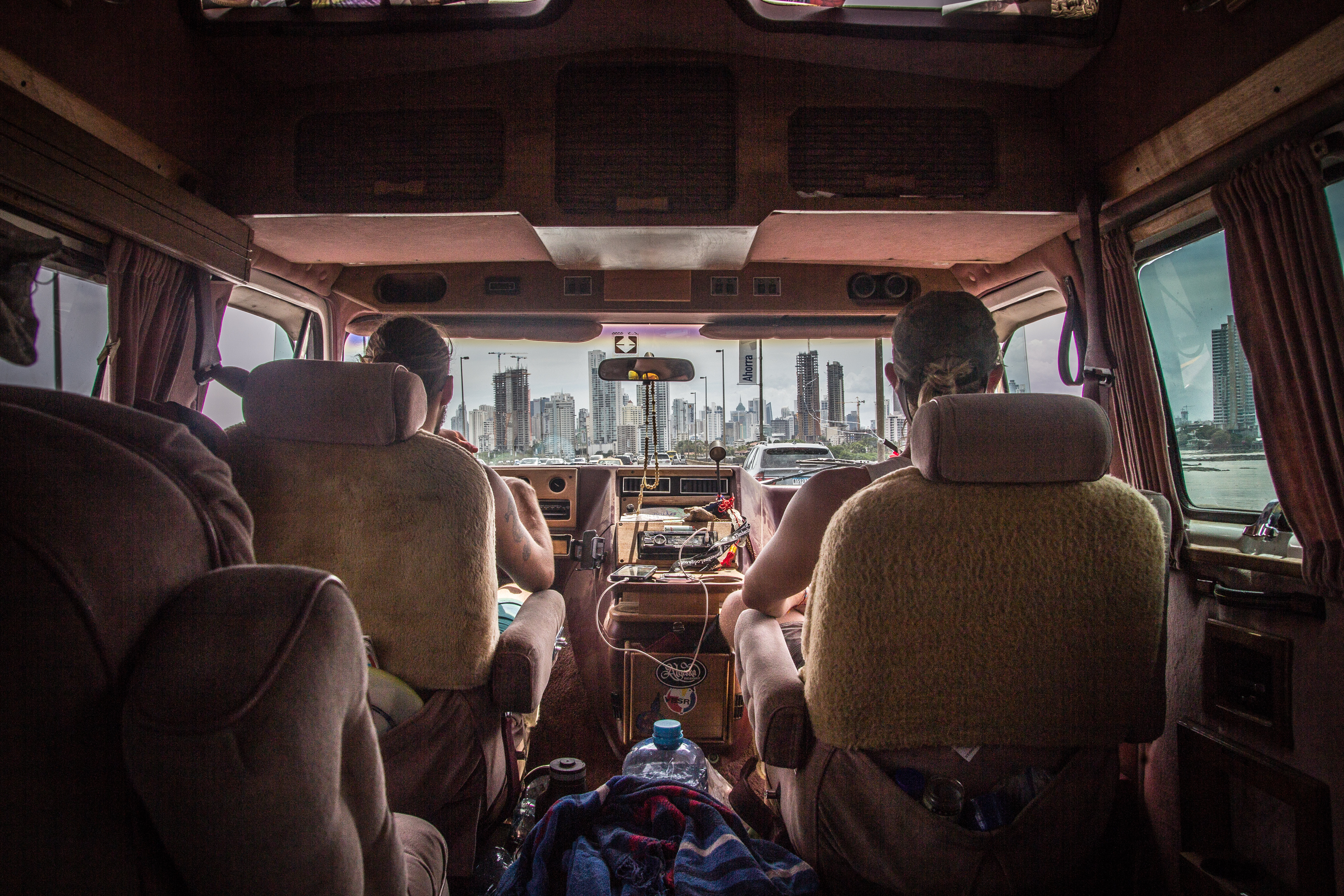 Navigating the city was madness with an old dodge van and trailer. Most people honked and waved and asked, “Can I come?” 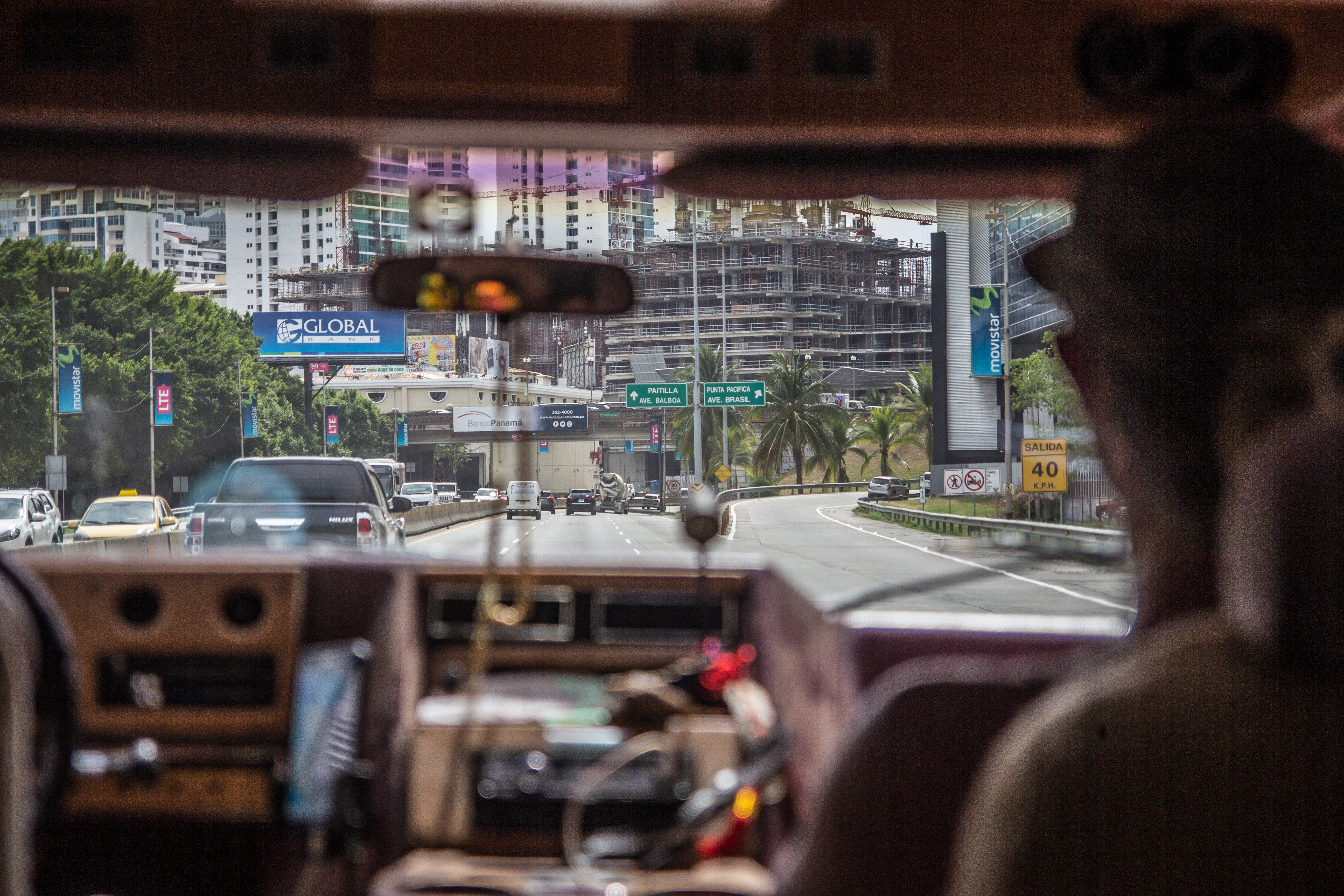 Before we knew it we were navigating the countryside listening to reggaeton downright living the dream. We had formed a loose plan and decided to make a run for a town that was located right on a lake that I heard had Peacock Bass in it. I knew nothing of the town, I had no idea if there was access to the lake, I had no idea if there was a place to camp or if the people were nice. I only knew there were bass in this lake and ding blast it we were going to make it there. We crossed over a bridge where a beautiful little creek was gurgling by when we saw a family parked in the middle of it obviously gathering their water for the month or week or whatever it was. Life isn’t all easy here and I’m constantly reminded of this while traveling and always remember how easy my life is. They didn’t really know what we were up to but after a good conversation he told us two very important things; there are big bass in the lake, but you won’t get there with the van because the hills getting there are too steep. 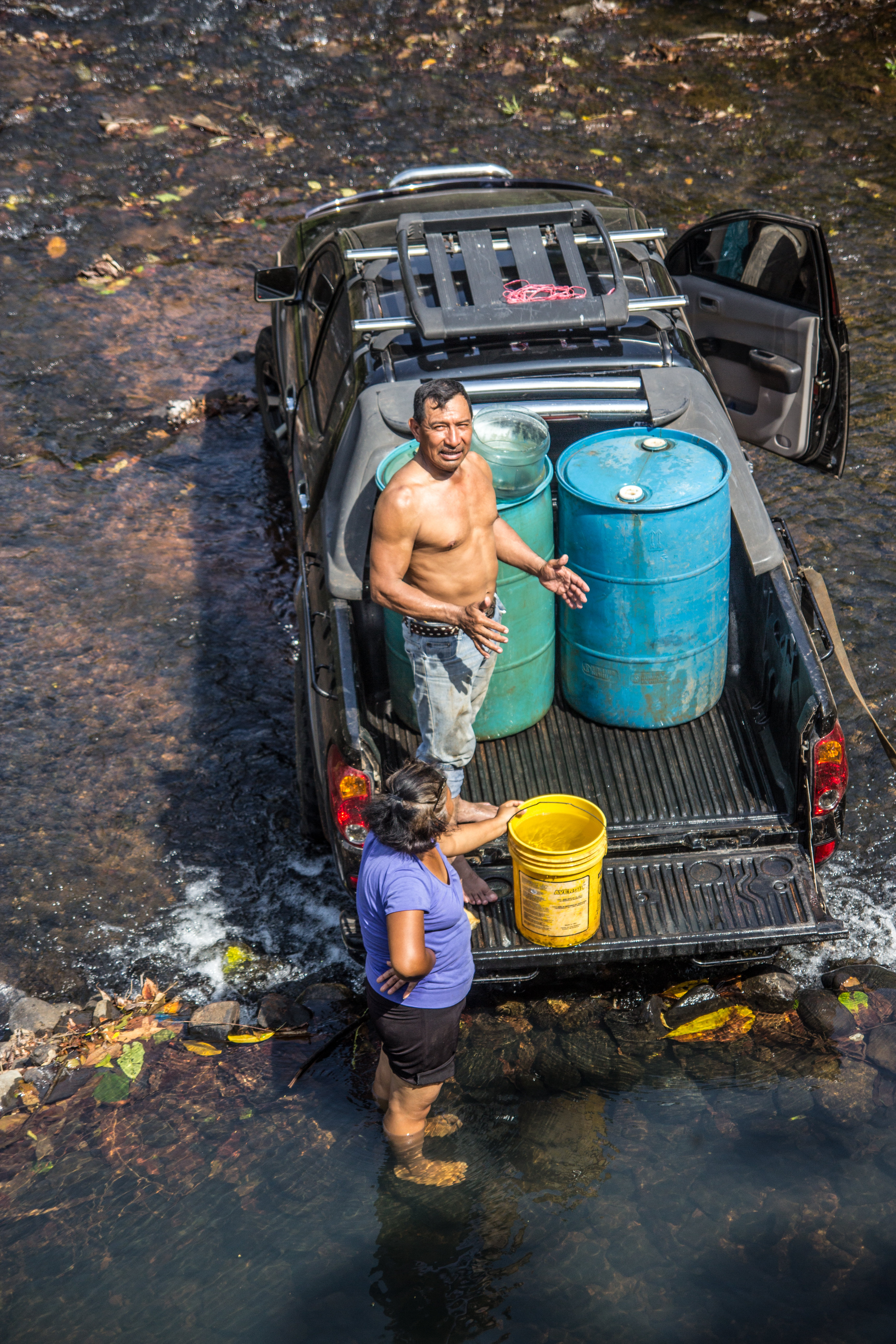 “There are very big bass in the lake, but you won’t get there with that van.”

We obviously didn’t listen to the second piece of advice and were too focused on the first because we came up on the first hill and had a look. We parked at the bottom and ran to the top and thought we could make it for sure. Desi jumped in and said, “This is a group decision, if anyone thinks this is a bad idea speak up now.” Of course we all kept quiet as those big bass were on our minds now. Desi didn’t make it 20 feet when the tires started spinning. I felt hopeless as the van started sliding backwards with the trailer as well and it happened so fast Desi couldn’t control it and jackknifed the whole rig terribly. 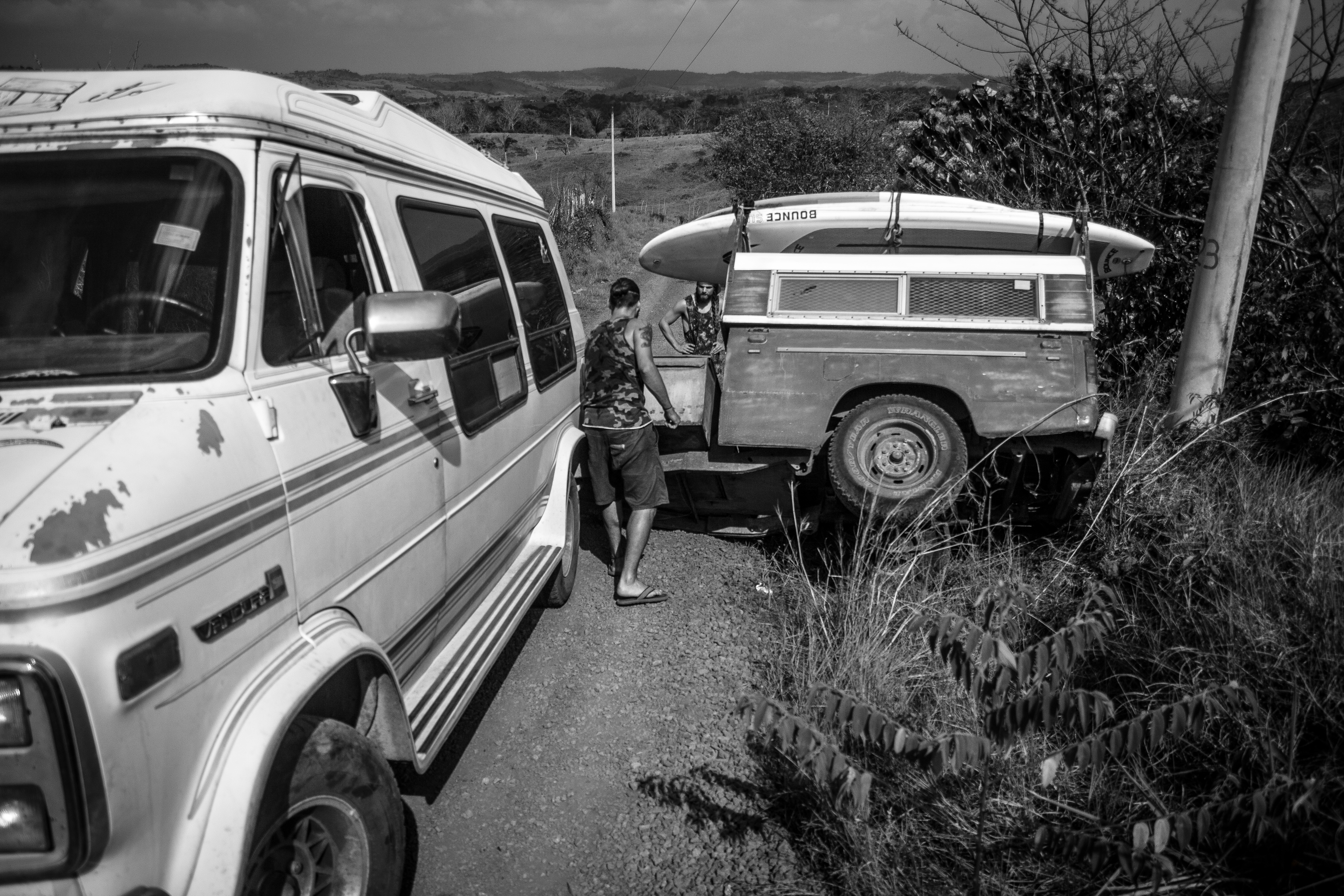 When the dust settled we took the advice of those adventurers before us and didn’t move a thing until we stopped, smoked a cigarette and talked about the possible solutions. We were in the middle of nowhere and this kind of thing could be a trip ender, not to mention there were massive peacock bass in a lake only 5 miles away. The universe was looking out for us though, because 5 minutes later a couple guys came up the hill in a heavy duty truck. At first they looked at us cross eyed until we told them we were fisherman going to the lake. They were able to drive around us and actually towed us up to the top of the hill on the first try. We were so thankful and shaking hands and undoing the rope when they stopped us and sort of said,”What are you doing? There’s three more hills bigger than this one?” Thankfully they showed pity on us tourists and towed us up the next hills as well. After saying thank you and shaking hands and offering them some cool rocks we had found, we were on pavement and heading to the lake. 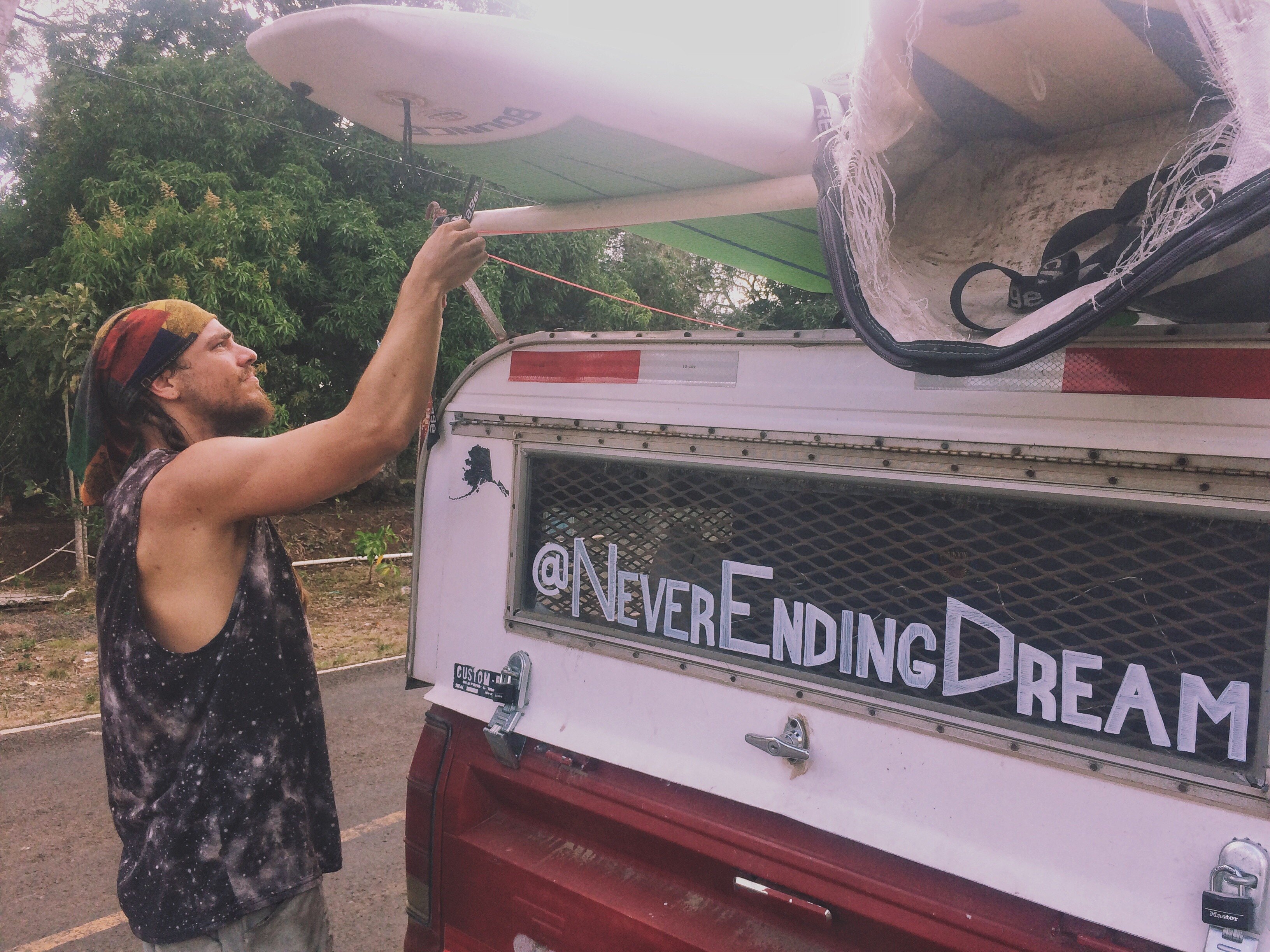 And so the dream continues.