I had the most epic day of fly fishing in my life yesterday with Dave Smith and Scott Smith, two of our top guides at Grand Teton Fly Fishing. Scott is head guide and owner of the company, while Dave is a long time fish head, and probably the best fly tyer in the valley. Scott invested in a new boat built specifically for the lakes in our region. It was shipped the other day and yesterday we took her on the maiden voyage. Since Yellowstone Lake iced off earlier than expected this year due to high winds, we decided to head up there and give it a go. It was great to head north out of town and to see the snowpack progression. There’s a lot of water in the mountains this year and just yesterday they bumped the flows from the dam another 4,000 CFS. It’s going to be an interesting year which will shift our focus to the incredible lake fishing in the region. Lakes often have less crowds, and bigger fish generally, and there can be some incredible sight fishing opportunities. If all goes to plan I hope to be guiding lakes for the next month! 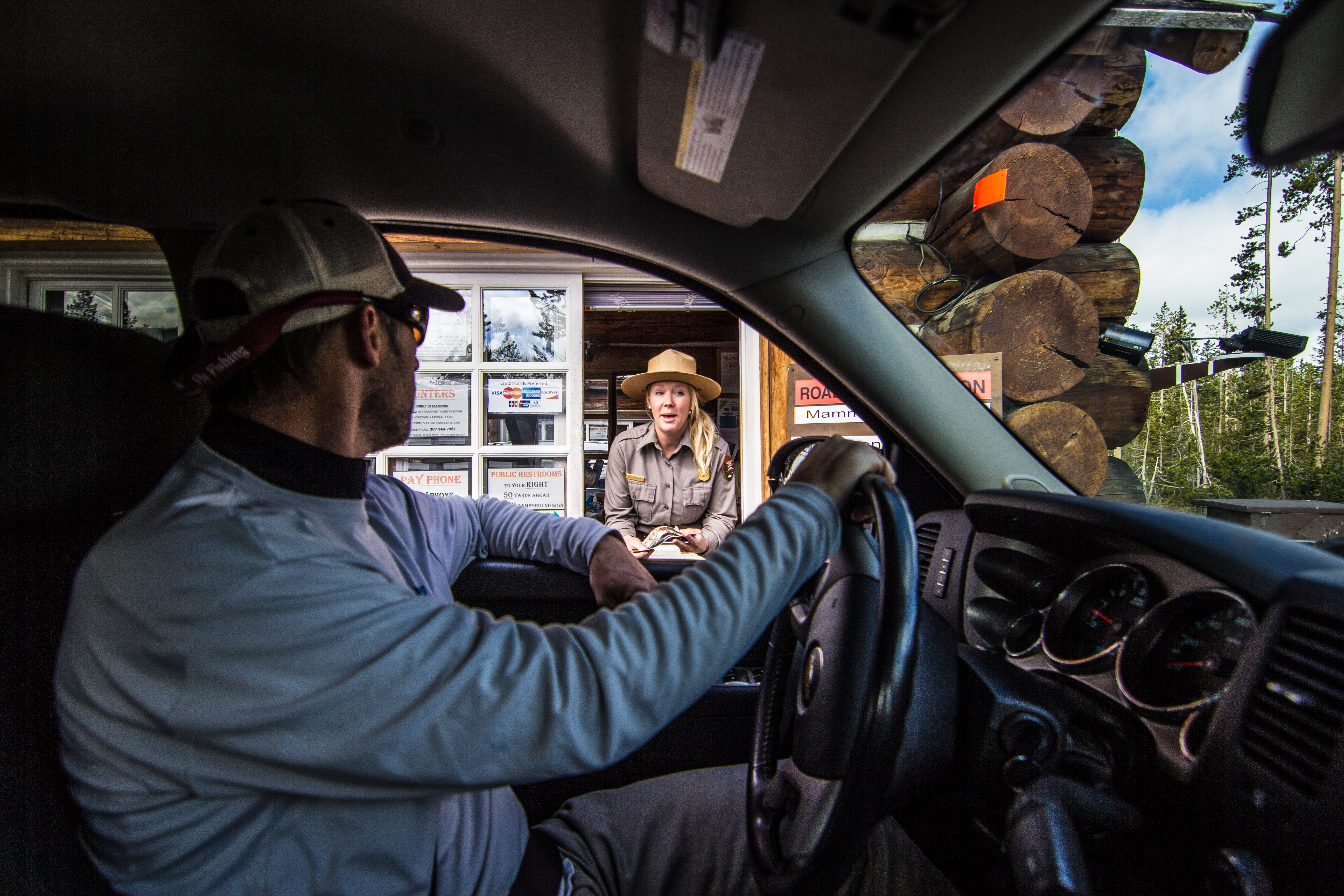 An experience we often take for granted. What an amazing thing it is to be able to recreate in our public lands. THIS LAND IS YOURS! 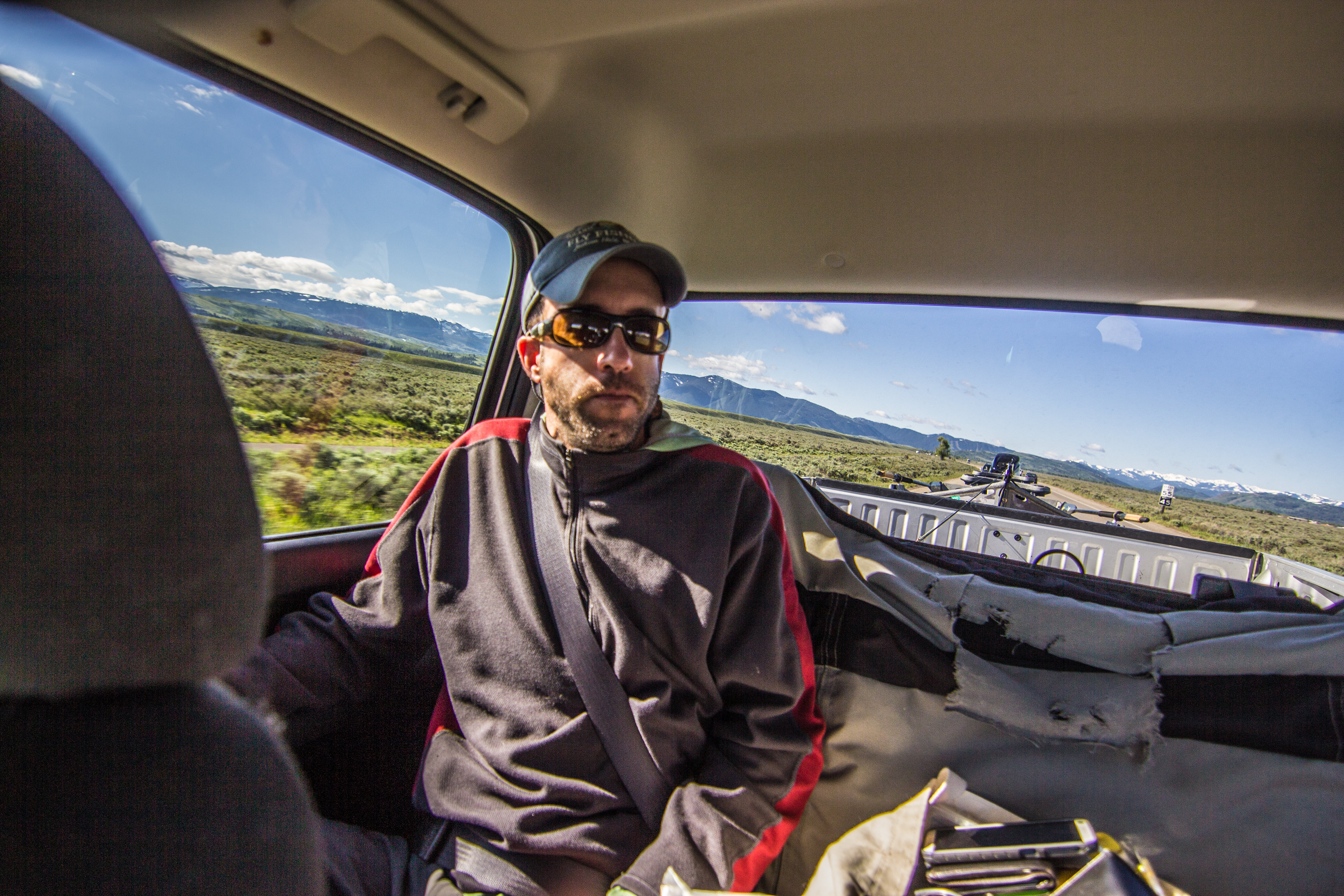 “Glasses Dave” One of the most talented fishing guides and fly tyers, I swear sometimes I think he has gills.

On our way up to Yellowstone National Park we breezed through the fields of wildflowers and traversed through a few high peaks. We passed Jackson lake and the upper snake river. We passed lewis falls and its confluence with the snake. We drove through some of the most beautiful meandering meadows everything bright green and lush. We even encountered a griz. When we finally put the boat in the water we made a run for a spot that Scott knew quite well. It was only my first few casts when I caught a beautiful 16 inch Yellowstone cutthroat. The next four hours were a blur. I couldn’t believe how beautiful the surroundings were around us while we crept through the white sand flats where big cutthroat were swimming steadily, ready to eat anything we threw in front of them. The best rig though, was a 150 grain sinking line on a 6 weight, with smaller mohair leeches in tan, olive, and blood colors. 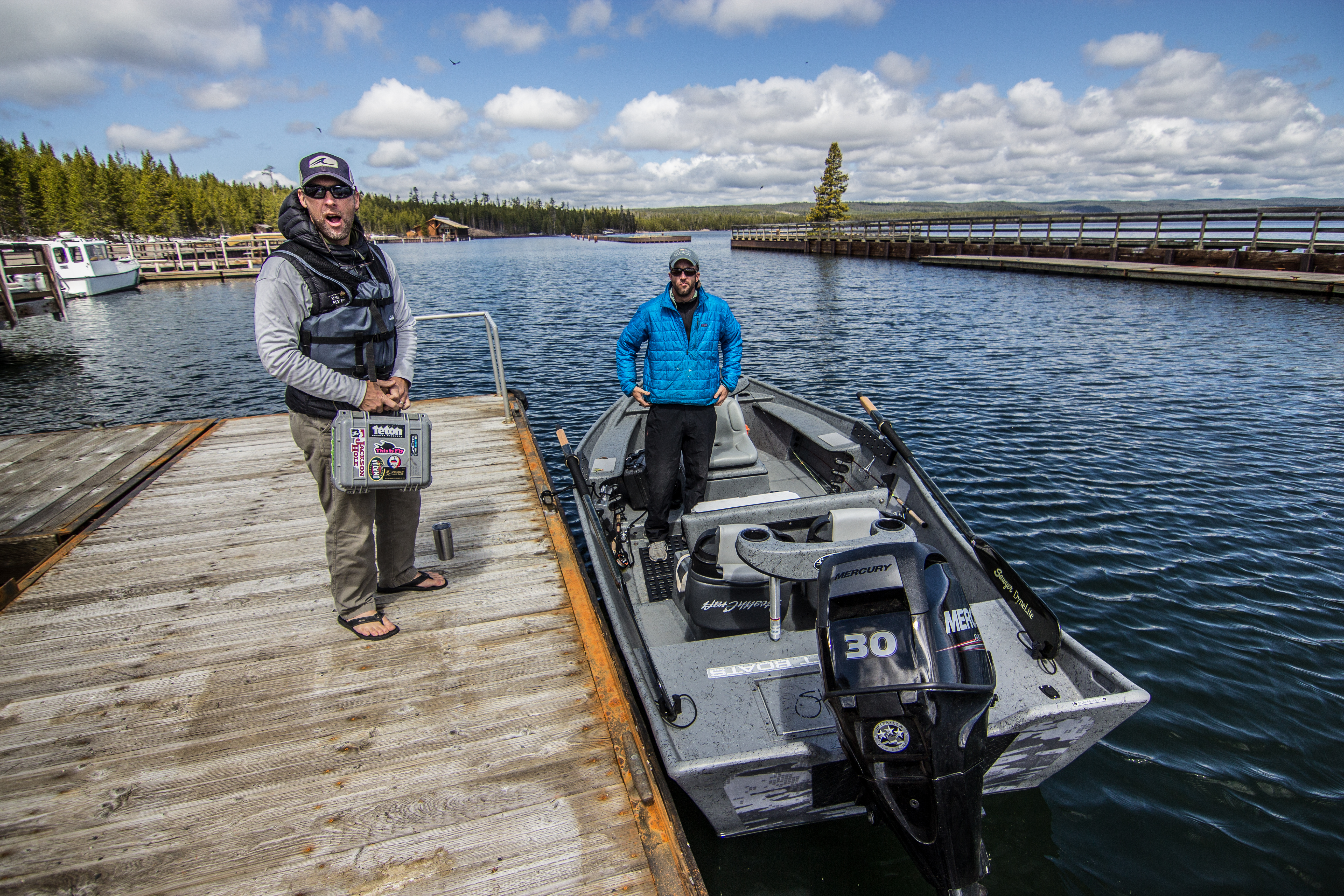 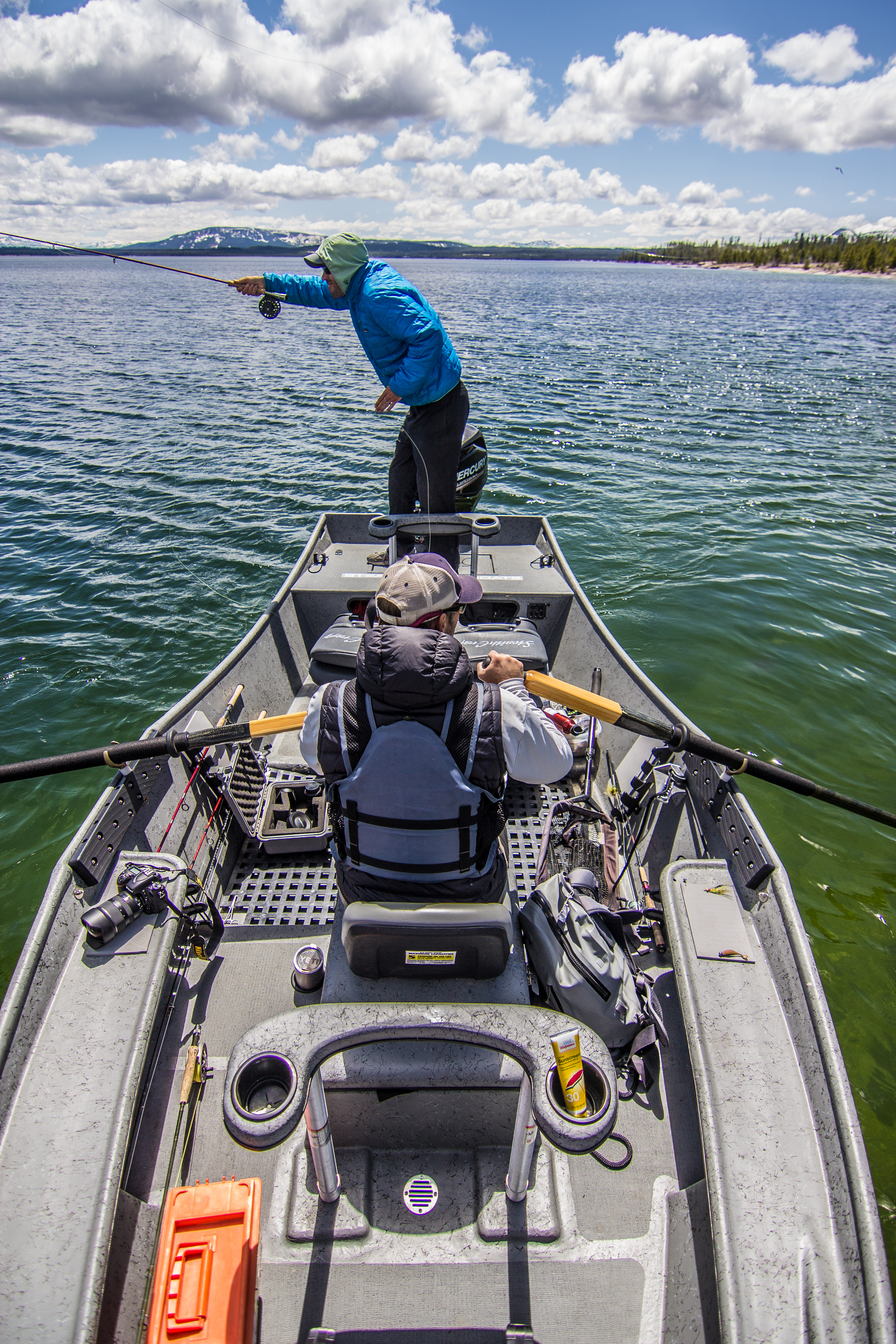 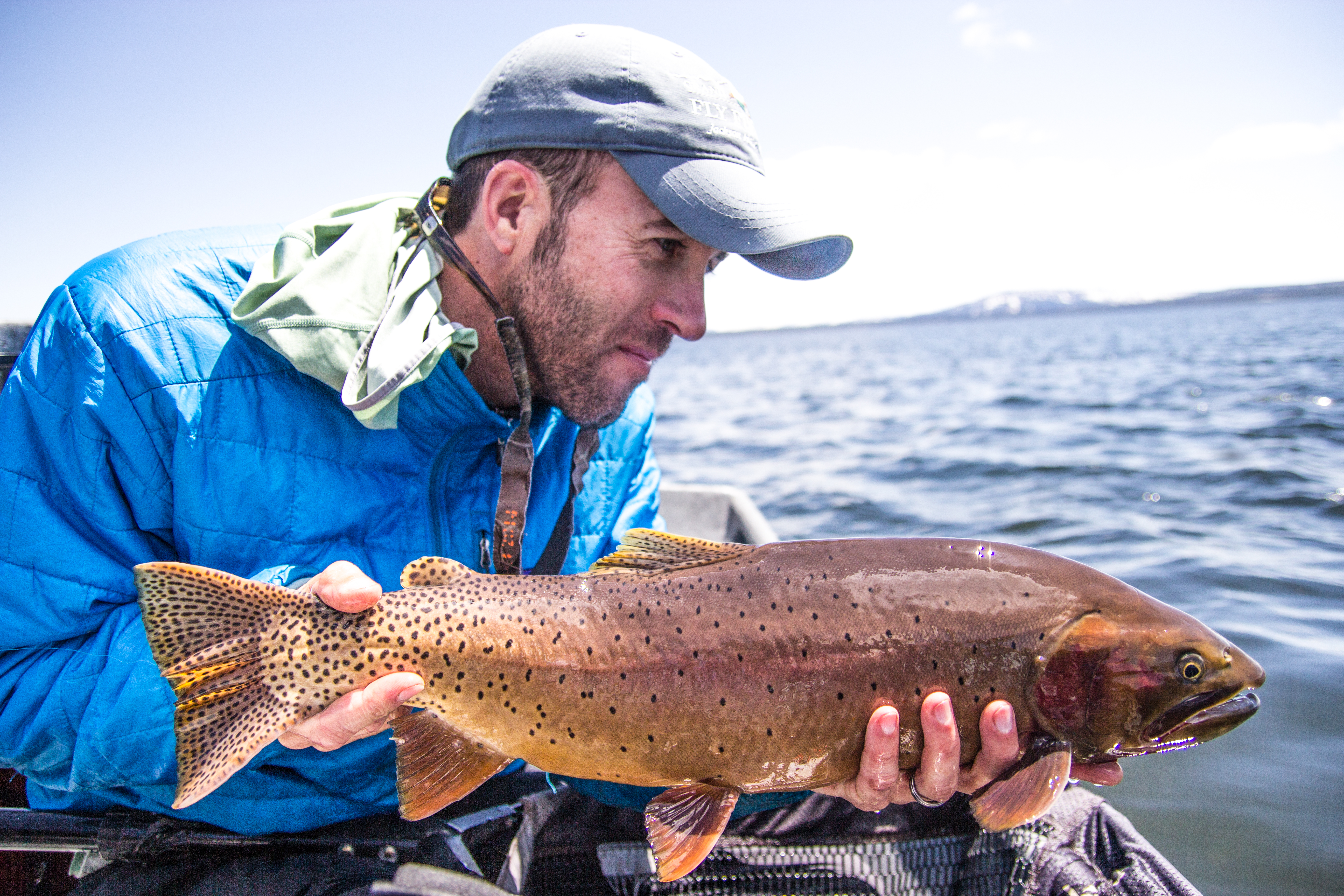 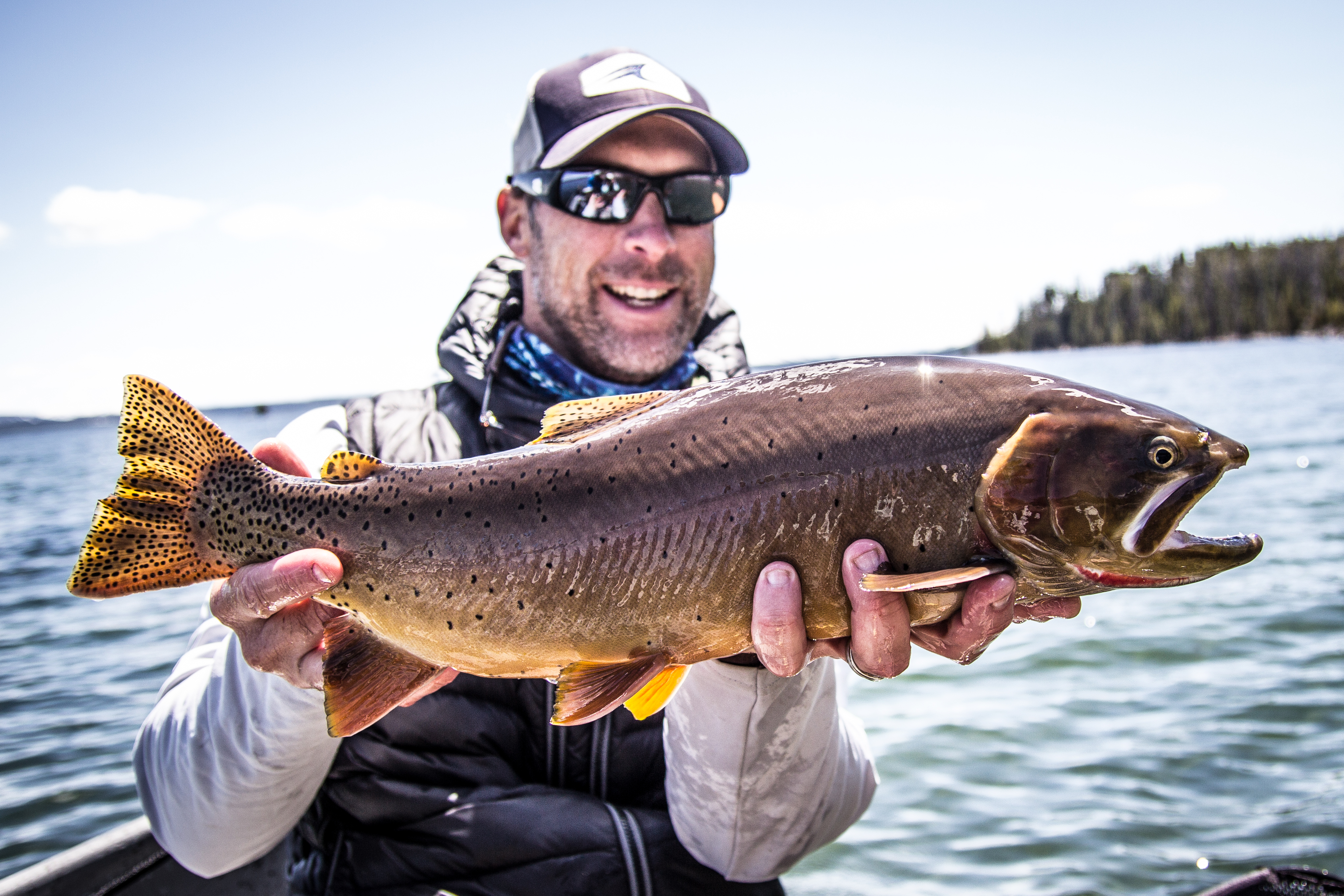 It took Scotty boy a while to catch up to Dave and I as we were both putting on a fly fishing clinic that day! 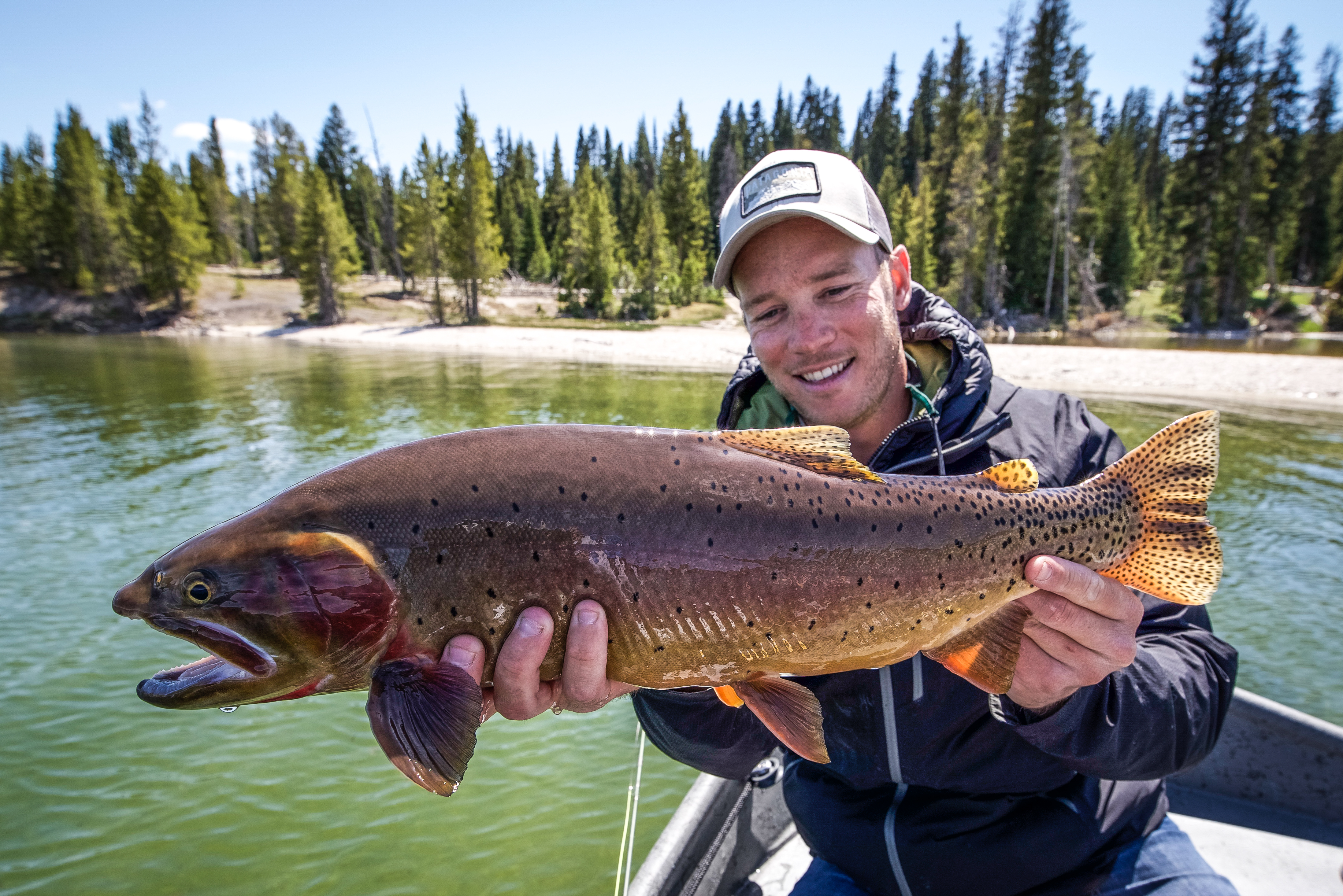 I caught this fish on a beautiful weed line where we saw lots of fish stacked up. Sight fishing produced the most fish of the day, a technique most trout guides don’t implement 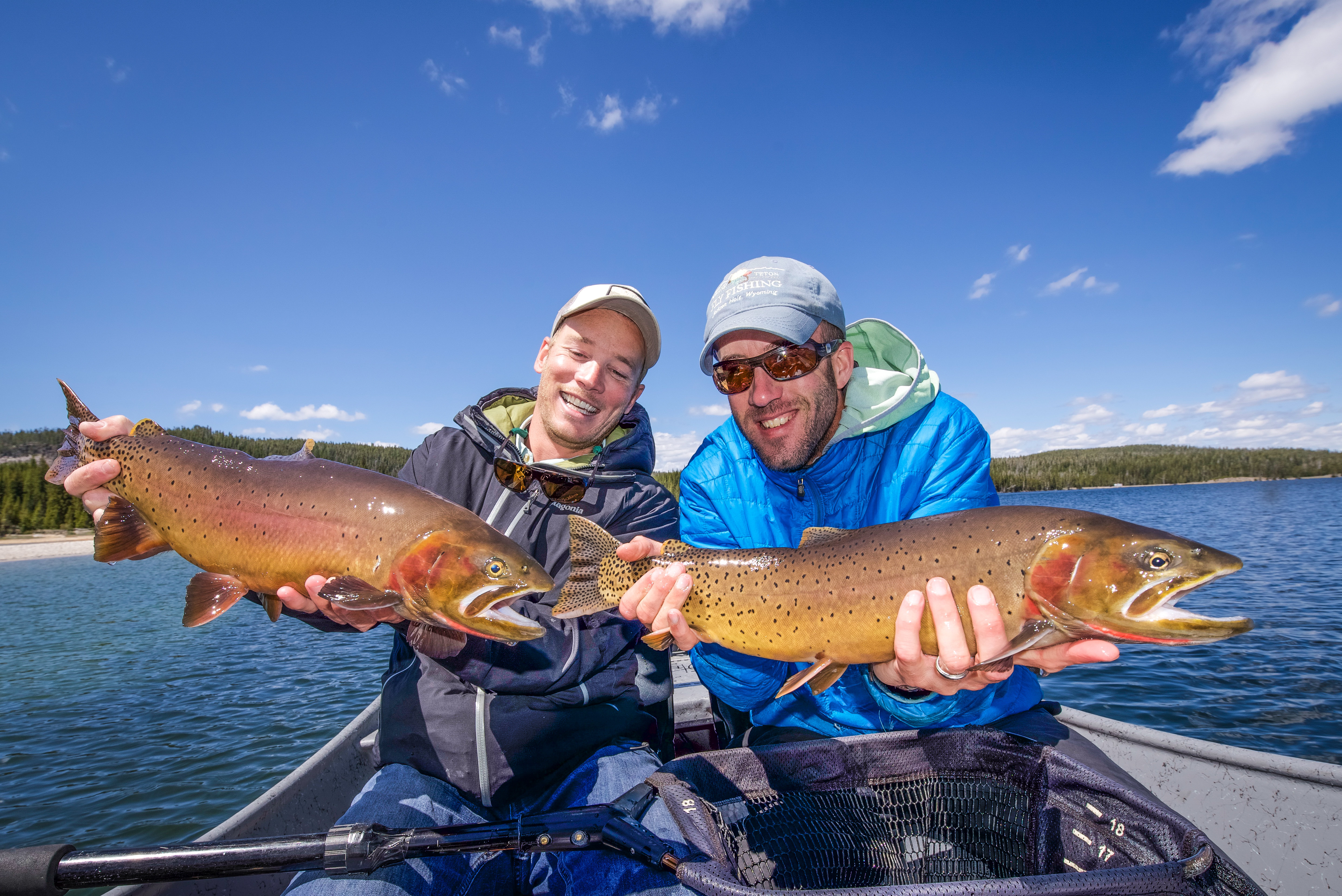 Yellowstone lake doubles! As fisherman we try our best to handle these fish with delicacy. Notice how we always keep the net under the fish for a picture and always try our best to keep the fish out of the water for the shortest time period possible. 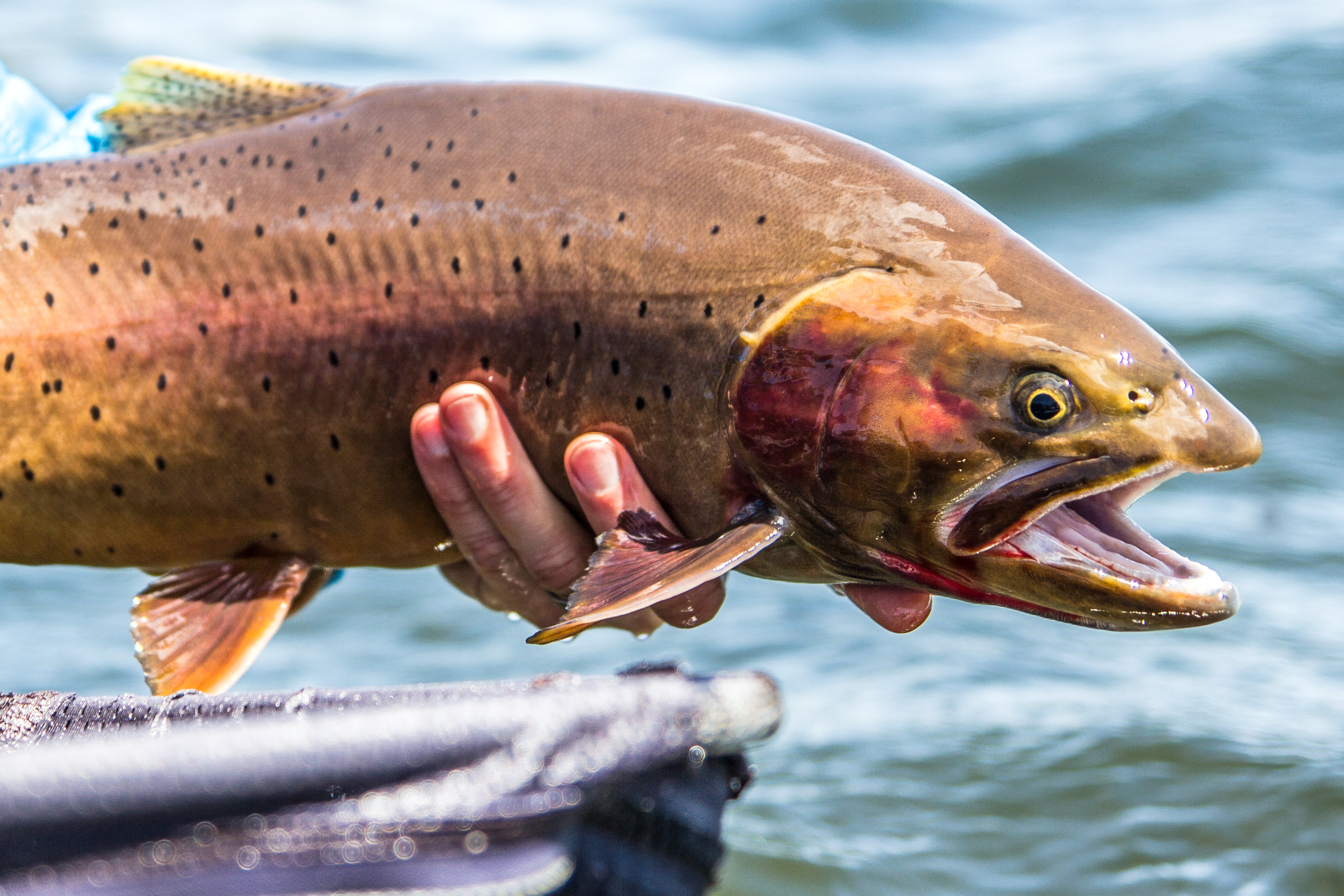 On the easy 2 hour ride home we reflected on our day and our beautiful natural resources. We were mostly quiet as we drove through the four foot snow banks and the burn from last year. Nearing the continental divide and driving past a frozen lewis lake, noticing the massive cornices on top of Sheridan peak we thought we could also be skiing today. While heading South and taking note of all the birds along the way we also though quietly to ourselves the severity of the President recently pulling out of the Paris agreement. As much as it is important to fight for your public lands, it is almost more important to enjoy them. Because as Henry David Thoreau has said, “In wilderness is the preservation of the world.” And like Terry Tempest Williams has said, “If you know wilderness in the way that you know love, you would be unwilling to let it go.” 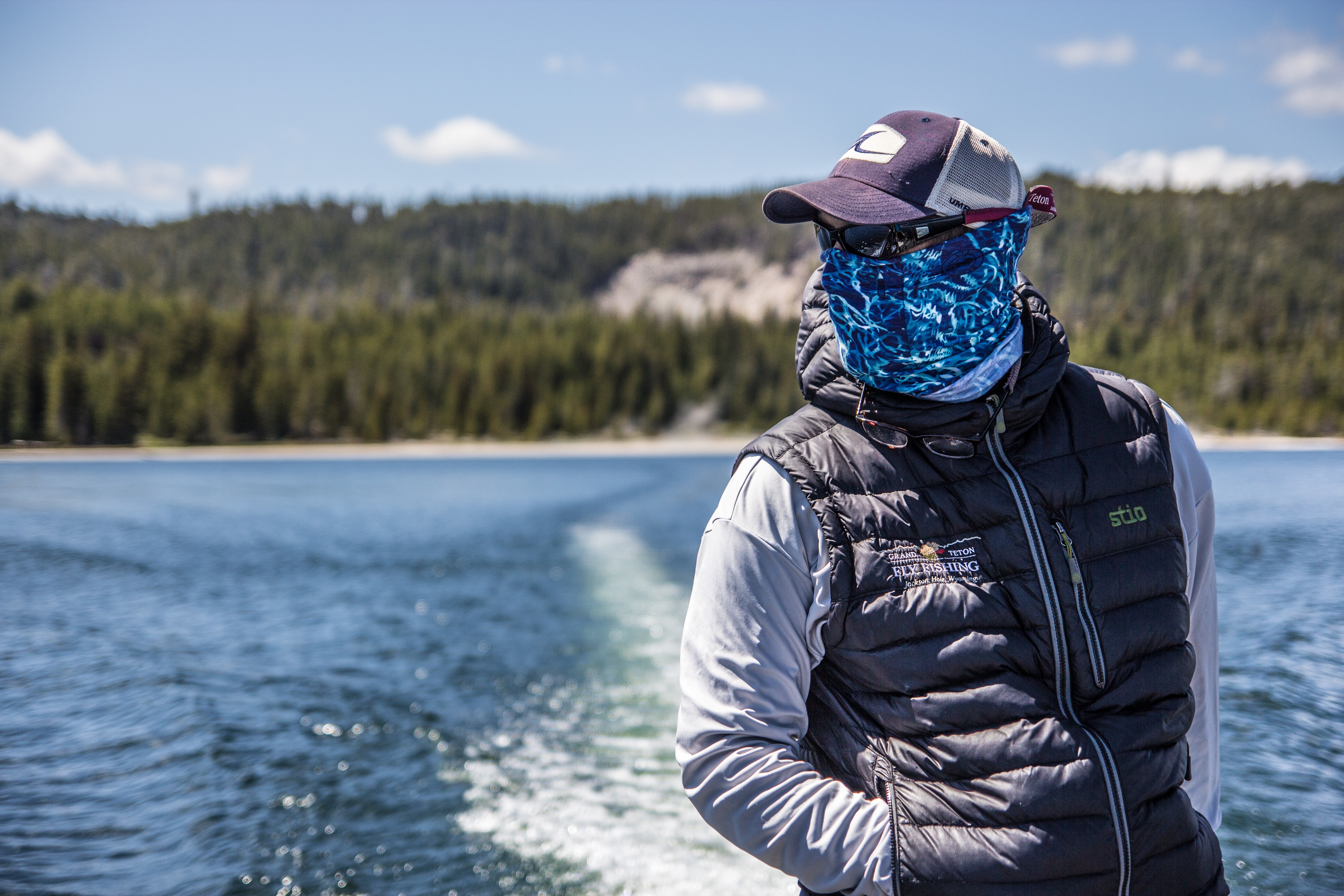 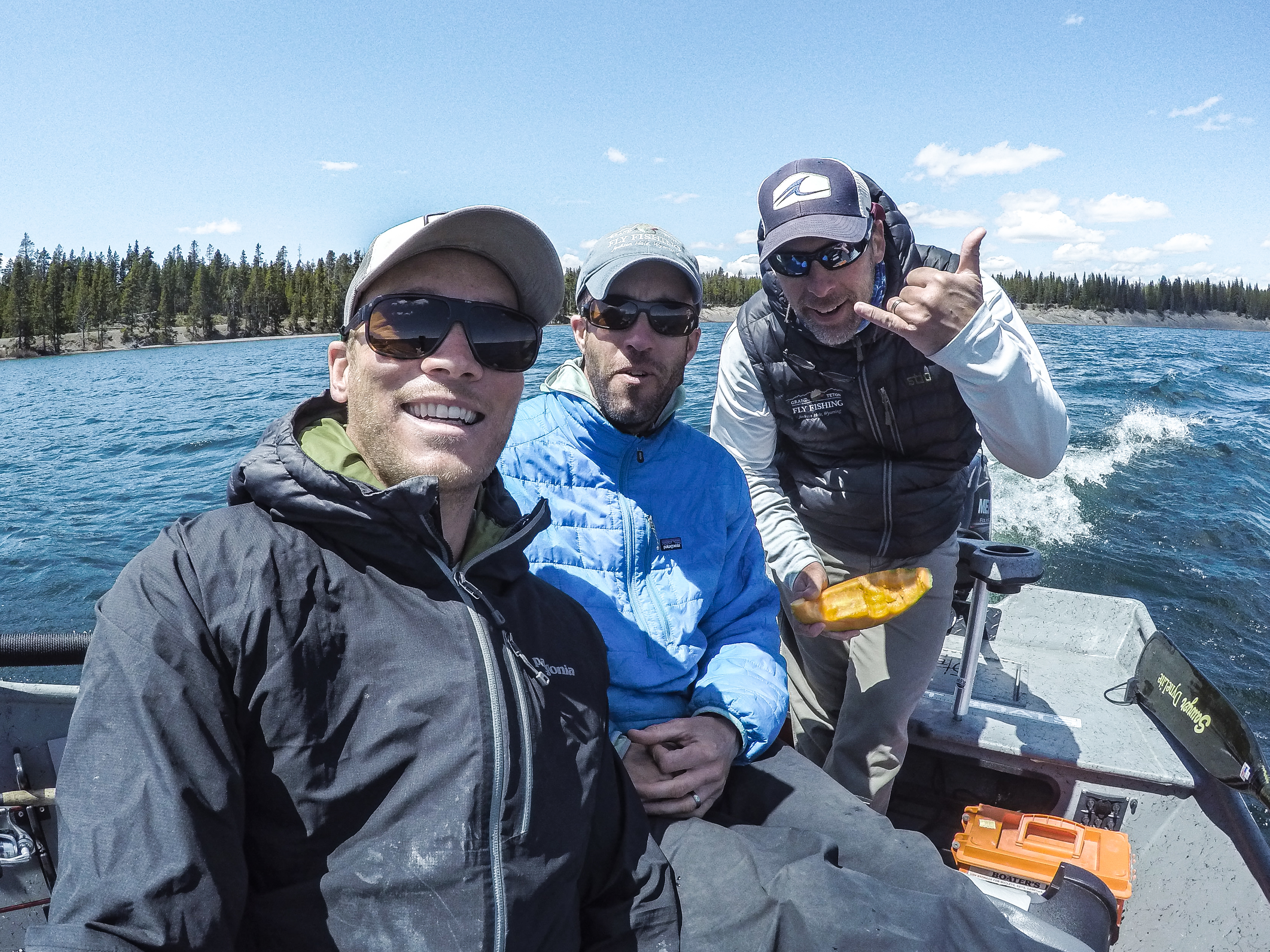 Come fish the lakes with us! I can only hope to show you an incredible day like this so that just maybe you may be able to reflect and interpret the land in your own way. Because only then will you be able to protect it!