The running of the bulls in the redneck riviera

Immediately following our trip to the Bahamas, I flew to Pensacola Florida to join Jess and Scott Smith for a couple days chasing redfish on the redneck riviera. I had never been to this area before so of course it was exciting to fish new water during the very exciting running of the bulls. We met our guide Rick in the morning and talked through the plans for the day. He pulled out his box of flies that were custom tied for this occasion. So we rigged up quickly and pushed off and gently motored out for what was to be one of the most epic days of fly fishing. 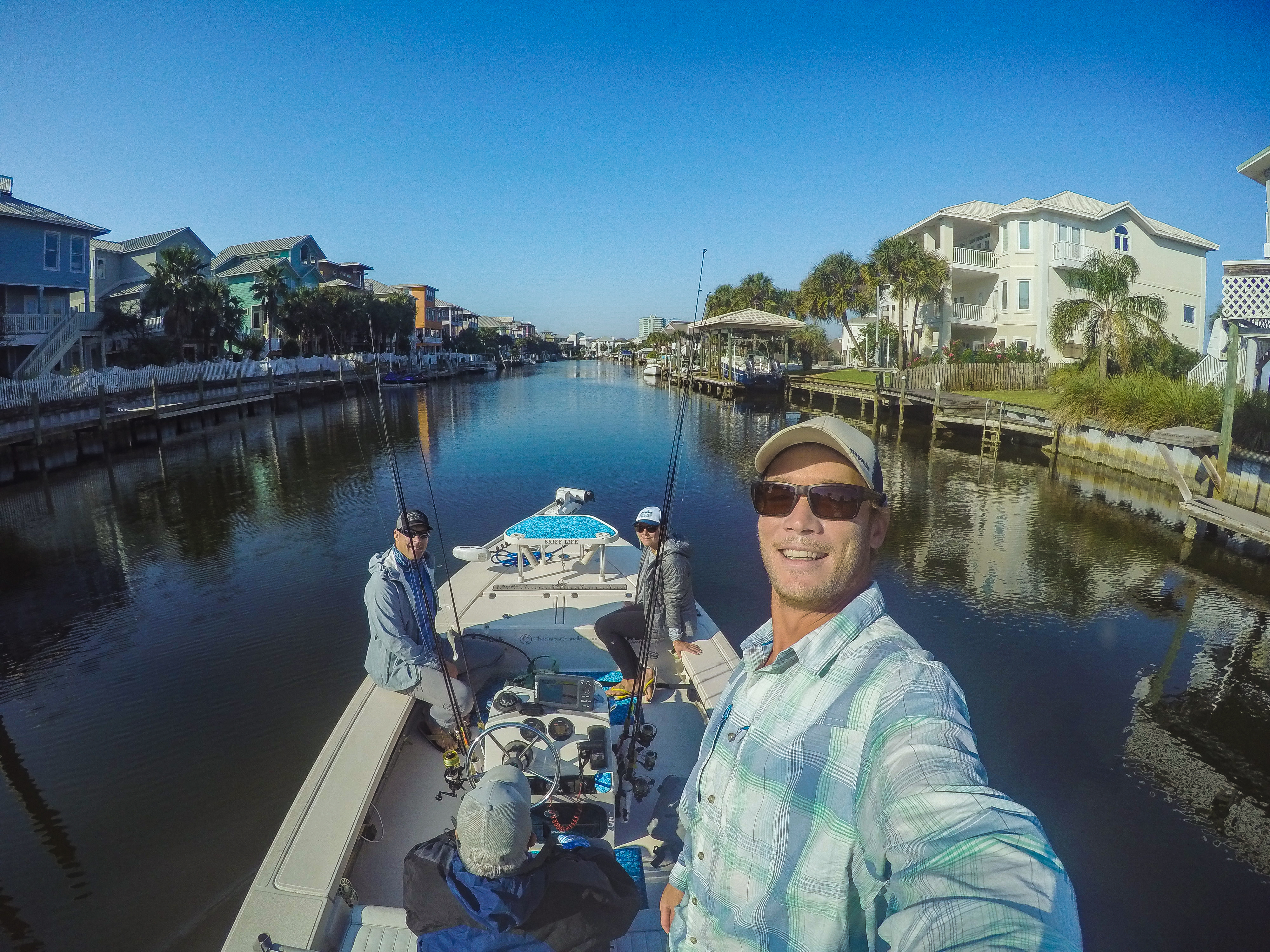 Literally the day before I was chasing bonefish on the flats in the Bahamas so during the motor I had lots of great stories to tell. This morning was perfect visibility and no wind so the sight fishing possibilities were endless. About 20 minutes after we cut the motor I saw my first redfish. We were on a beautiful white sand beach where you could make out the shapes of huge redfish cruising the edge. I couldn’t believe it. I jumped up on the bow and stripped out 50 feet of line on my 9 weight. I had a six foot piece of straight 40 lb for my leader and an oversized chartreuse closer minnow for a fly. Eventually we were close enough to the pair of redfish so I casted. I let my fly sink for a minute and started stripping. The two fish turned and were right in line with my fly so I started stripping faster and watched as one of the fish opened wide and ate the fly. I set the hook hard and we all started shouting in excitement while I played this monster redfish. 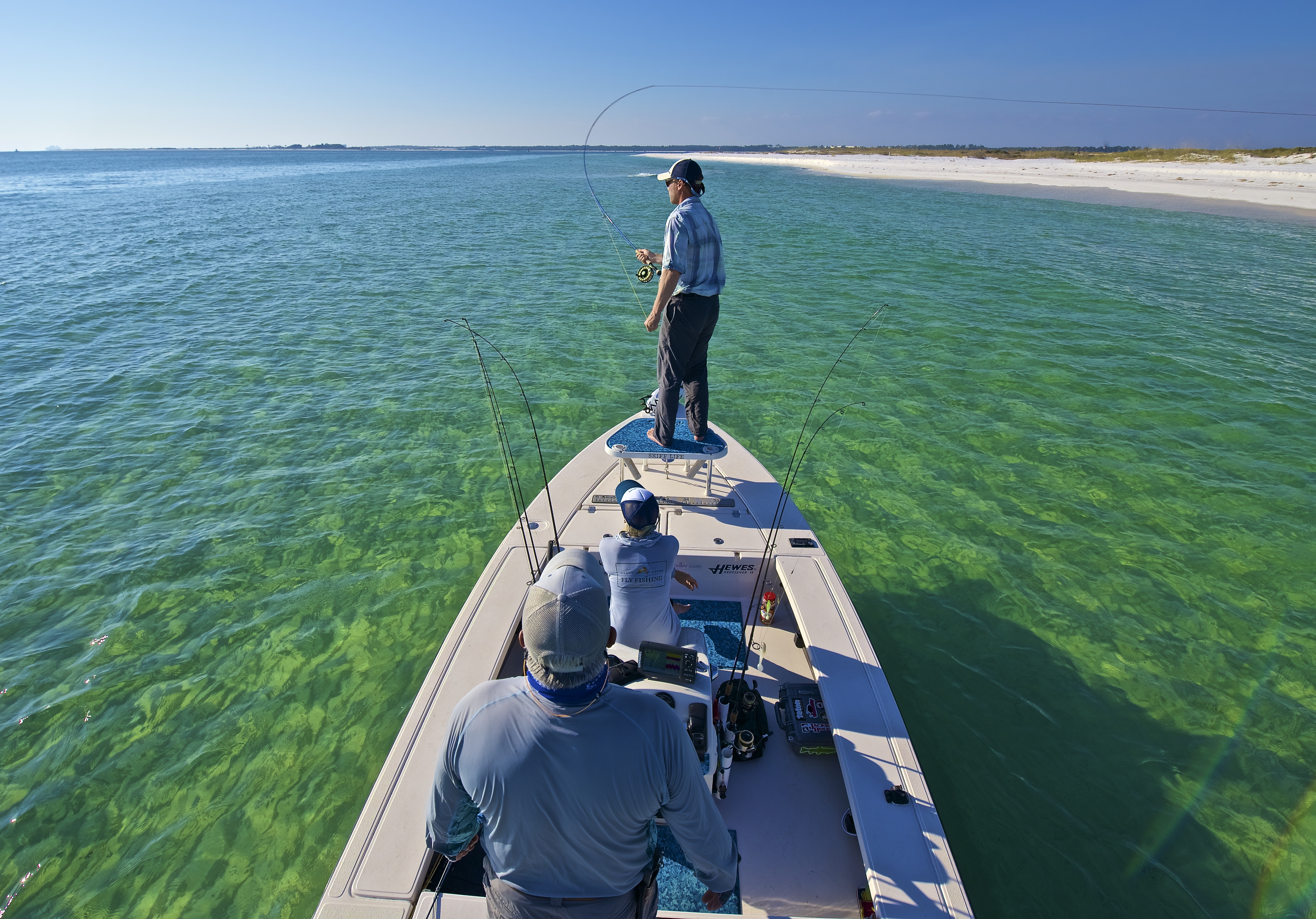 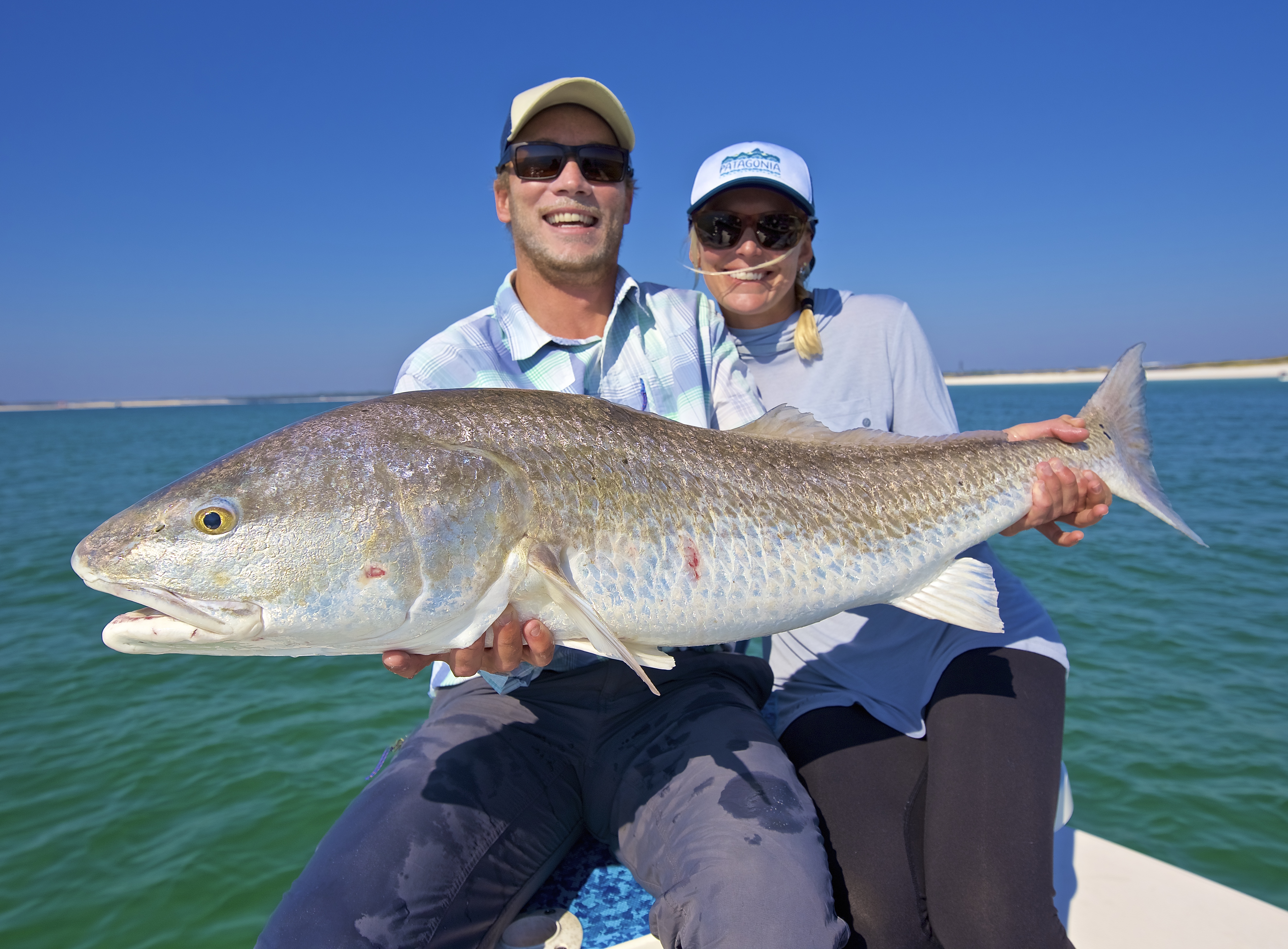 Later into the afternoon we got into some amazing action with bluefish and ladyfish schools busting sardines all around us. All we had to do was follow the birds around which led us to all the action. It certainly wasn’t my turn so I sat back, opened a beer, and watched as Jess and Scott beat up on school after school of these amazing fish. It was quite a sight watching how aggressive these fish can be! 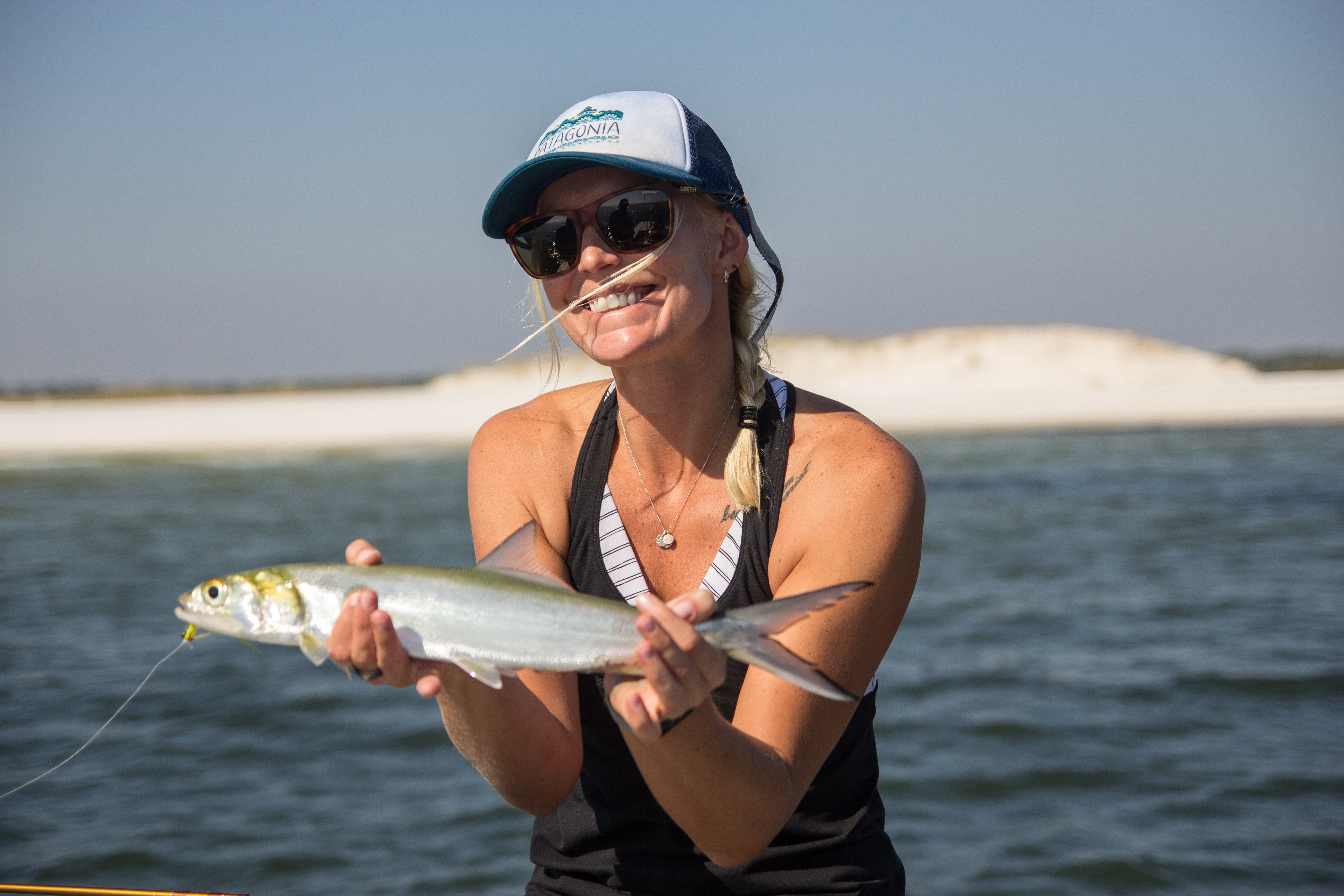 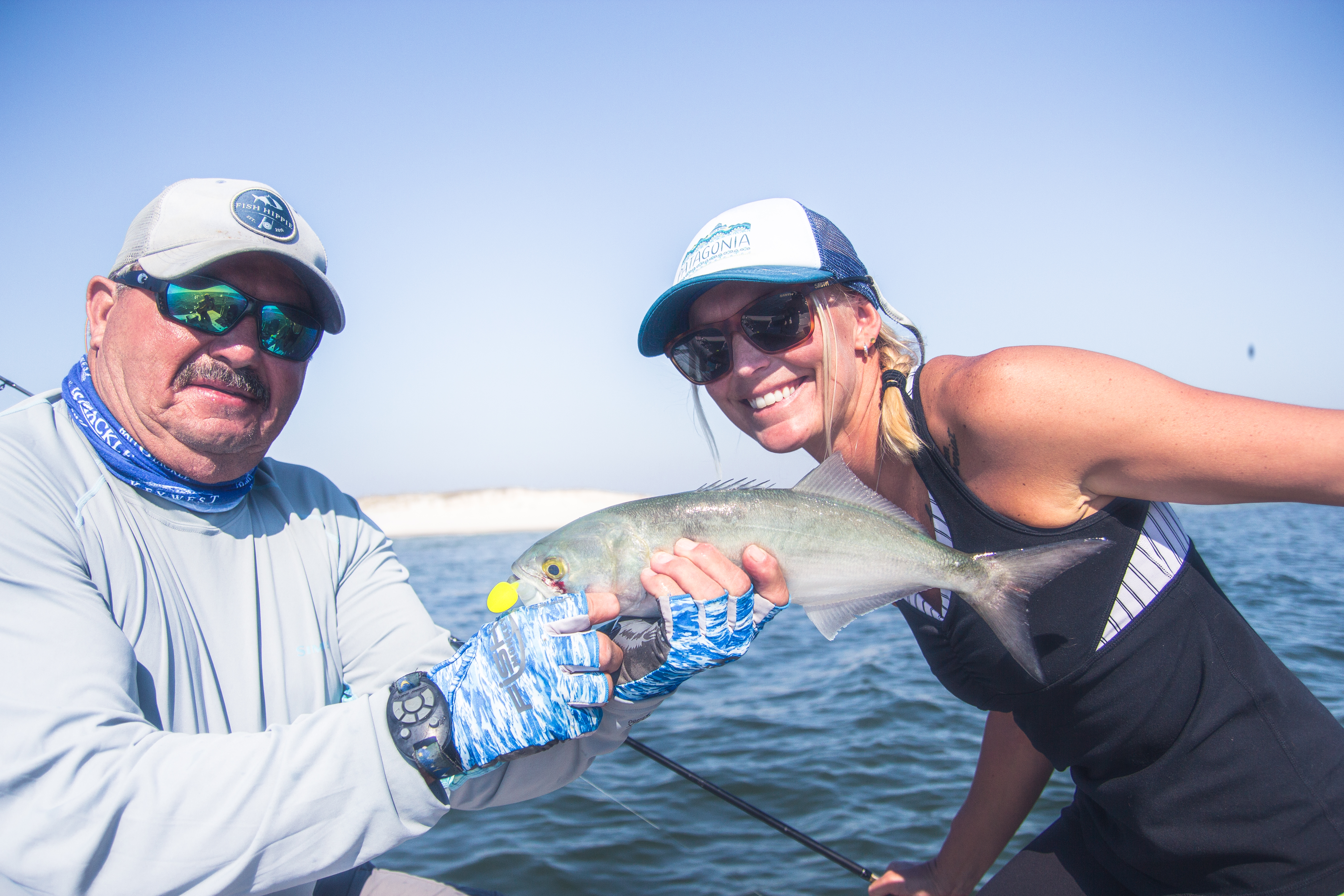 I have had epic redfish fishing before, but this was so unique. You might remember last year in New Orleans when Jim and I had an incredible time with big redfish but that was dirtier water. This water in Florida was some of the clearest water imaginable. There’s nothing quite like a thirty pound redfish charging your fly down in crystal clear water. That night we went to a pirate themed beach bar and had oysters and sundown drinks and celebrated our epic day with Rick. The next day was our beloved friend Weldon Jones’s wedding so we partied all night and slept in the next morning. We eventually left Florida and made our way to a striped bass lake up North. I had heard a lot about this lake from Brian and Scott so was expecting big things!

Jess, Scott and I met our friends Brian Shinall and Joe Smith for an insanely early morning ride through Atlanta traffic on the interstate with a flats skiff in tow. It was like 5:30 in the morning as we drove with our coffee and high hopes for an epic day on the water. The weather was right the wind was low and the boats were all packed and rods rigged. These boys had fished the lake just days before and had one of the best days of striper fishing of their lives. 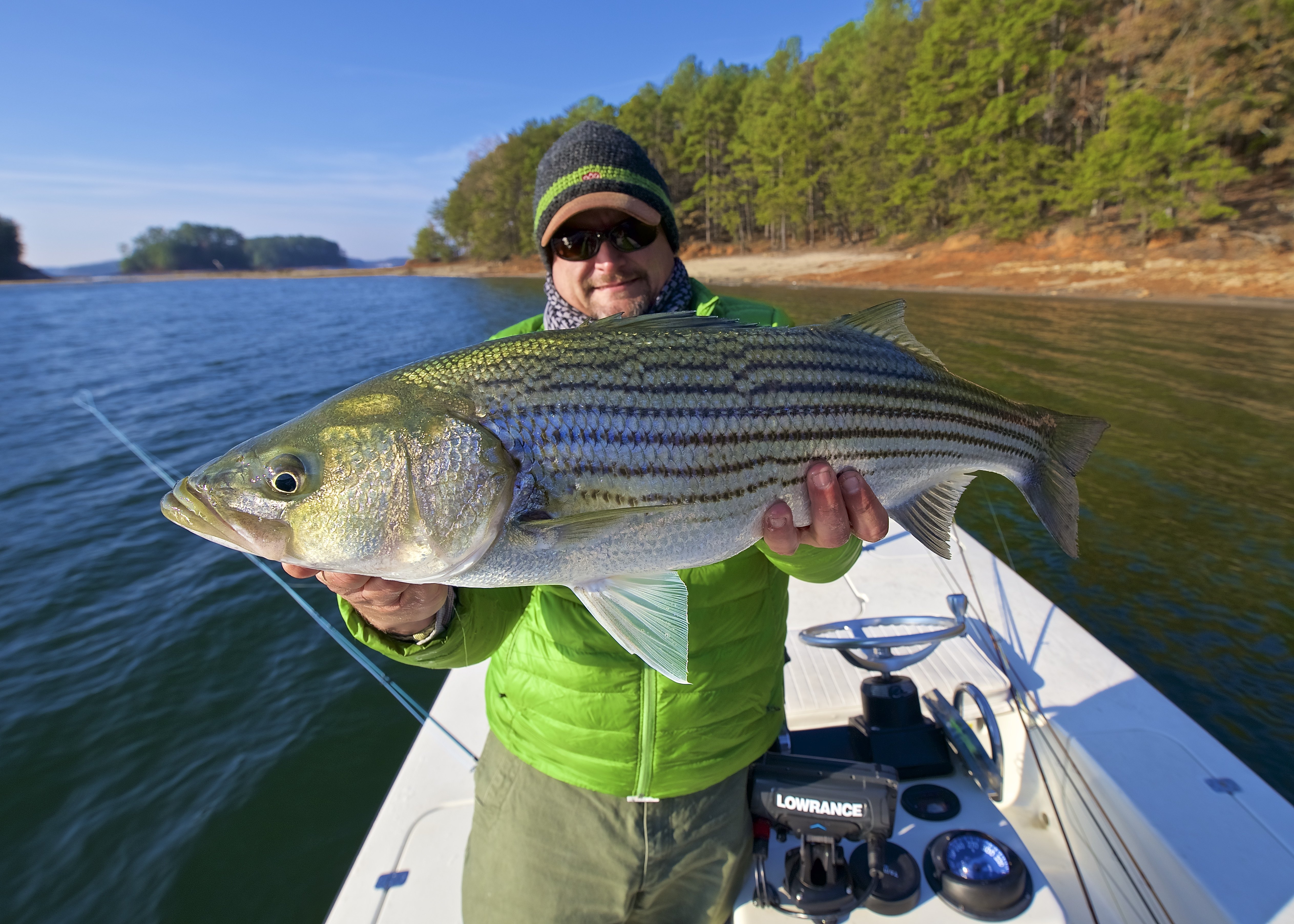 Brian Shinall with a massive striper from the same lake just days before. The weather was the exact same so this was going to be an incredible day….so we thought.

We launched the boats and motor around and looked for birds and bait and anything else fishy. The first two hours were slow but we held out hope for something big to happen. I mean, those guys had the best fishing of their lives just days before so how could today be any different? That mentality carried us on into lunch so we decided to check out a little dive bar and turn our luck around a little. We docked the boats and had a few beers and burgers until we jumped back in the boats and frantically motored around looking for bait or any activity at all for that matter. 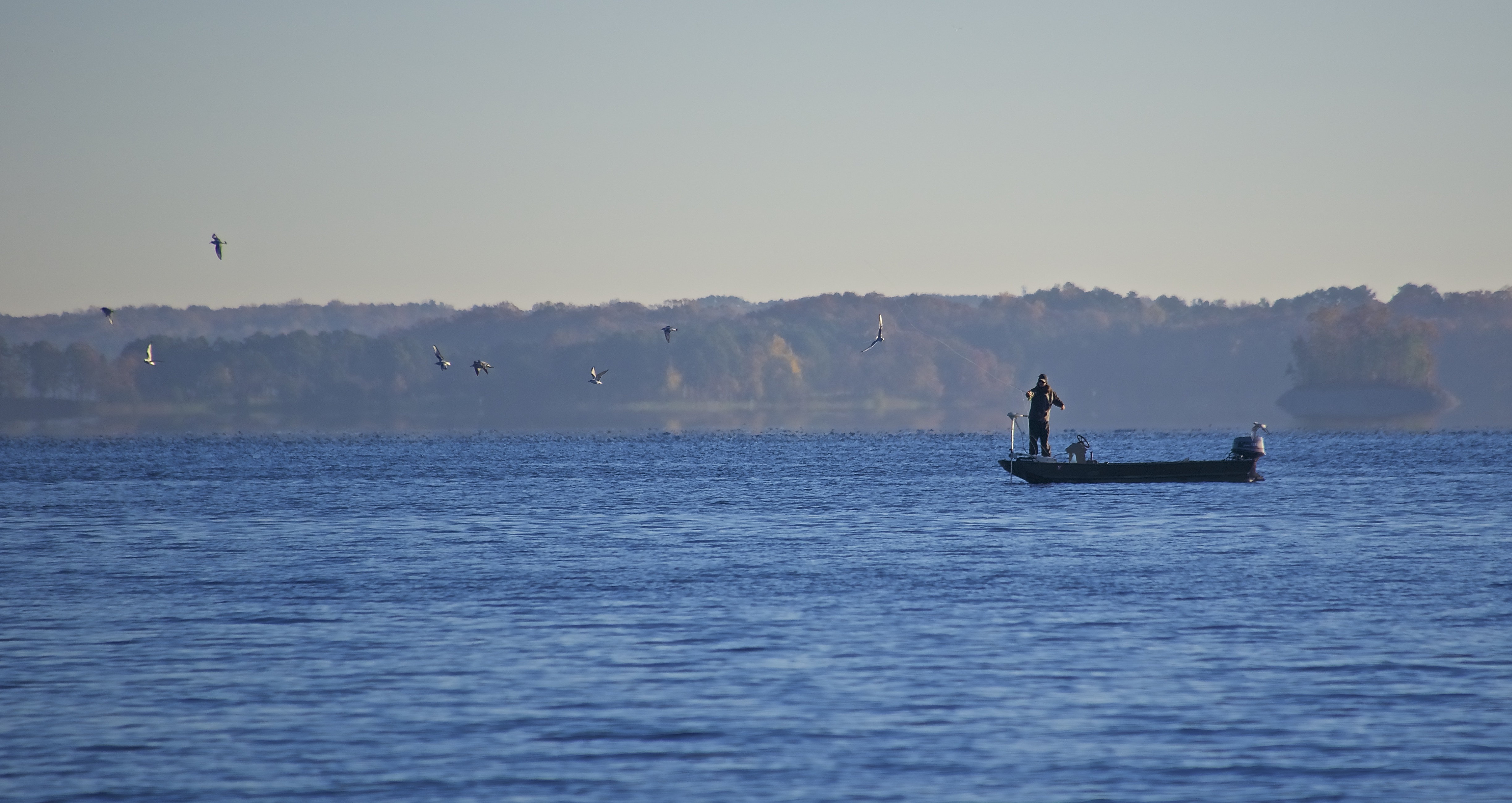 Eventually we realized what was going to happen. We got skunked. We burned through all of our gas and admitted defeat. That was a tough day of fishing. There was only one thing to do now and that was to go to a killer restaurant and drop a ton of money and eat and drink for the rest of the night. Thanks to Scott Smith and Grand Teton Fly Fishing for showing us a great time in the South!