In between lewis lake trips and the madness of the firehole, I was able to escape for a day recently and join a few good friends for our annual Henrys fork marathon. I first fished in the marathon in my early days working for Jeff Currier about nine years ago. Jeff and I had the same days off in the shop and one of those days we usually fished together. Jeff came up with the idea for a marathon which coincided with the opening of the ranch on the henrys fork. The idea is to walk from the trout hunter all the way to Osborne bridge in a day, and fish the whole thing. It’s daunting because we usually stay up late the night before and party down. After all, summer is here and we’re all going to be busy soon so why the hell not.

To make the event even more incredible, my good buddy Jack Kos was in from New Zealand. I met Jack while fishing with my good friend Tony Entwisle in New Zealand years ago. Jack is as fishy as any of us if not more so. He is currently completing his Phd in history and studying the introduction of brown trout to New Zealand. The day I spent with him last year was incredible, and opened up my eyes to the possibilities in New Zealand. As we left Jackson we picked up my good friend Scott Smith. We drove west over Teton pass and made a quick stop at World cast anglers to pick up our Idaho licenses for the year. We were met by a big group of guides lazily drinking beer after a long day on the river. Jack was stoked to be at the foothills of one of the most iconic pieces of water in the world. We shot the breeze for 20 minutes before carrying on to Ashton Idaho. 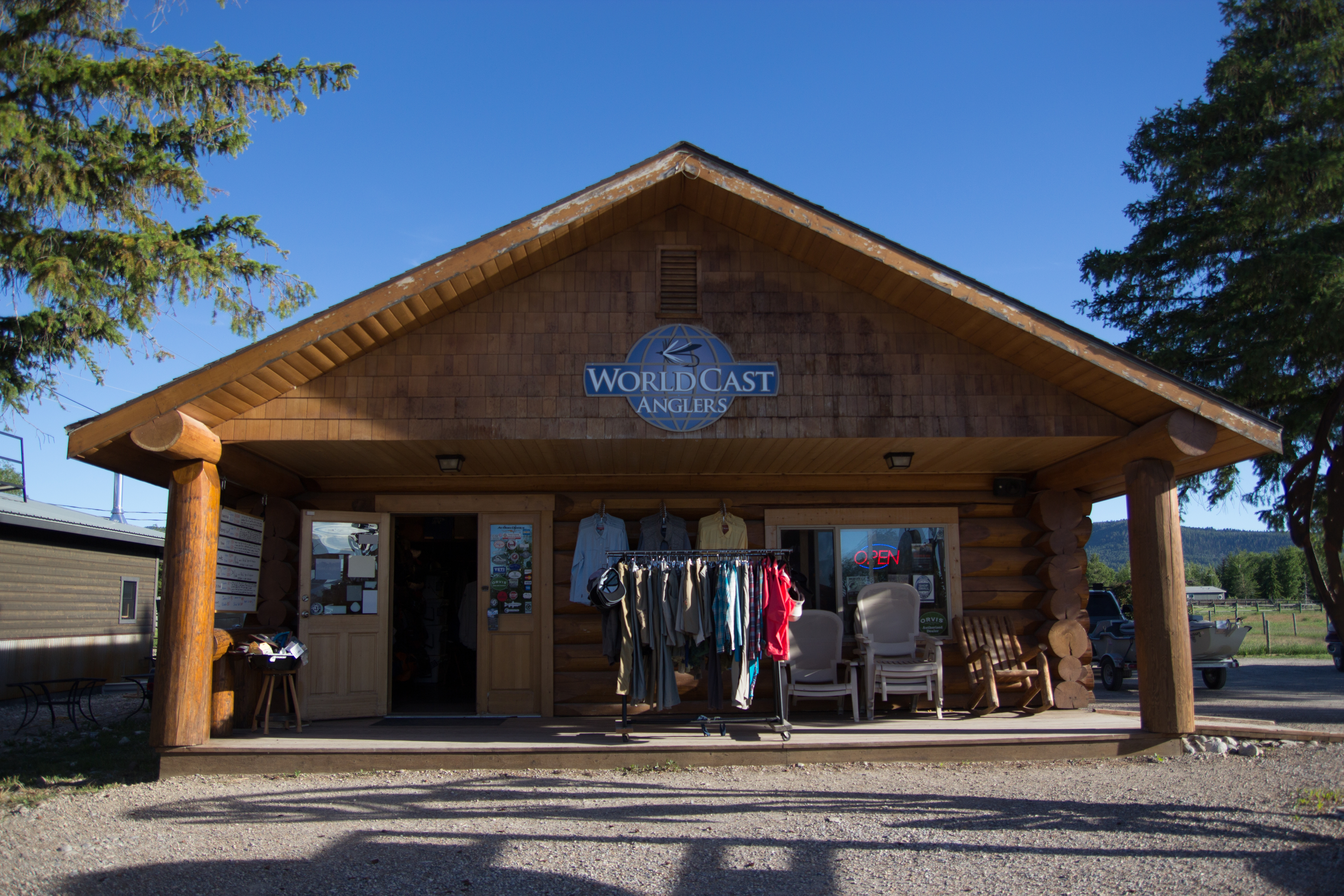 We pulled into the gravel pits around eight o’clock to find Jeff and Granny leisurely sipping a brew in their camp chairs. Most of the old timers had already gone to bed but we lit a nice fire and had a few hot dogs and cracked a few beers. I couldn’t believe how beautiful it was when the bugs started dancing on the water all around us while a few hard core fisherman waded out.  We were also joined by our photographer friend Nick Kelley. Nick was on assignment for YETI doing what he loves. Nick is an excellent photographer wielding his camera in one hand and a fly rod in the other although sometimes he doesn’t know which to put down. We had an epic night under the stars and eventually fell asleep next to the crackling fire. 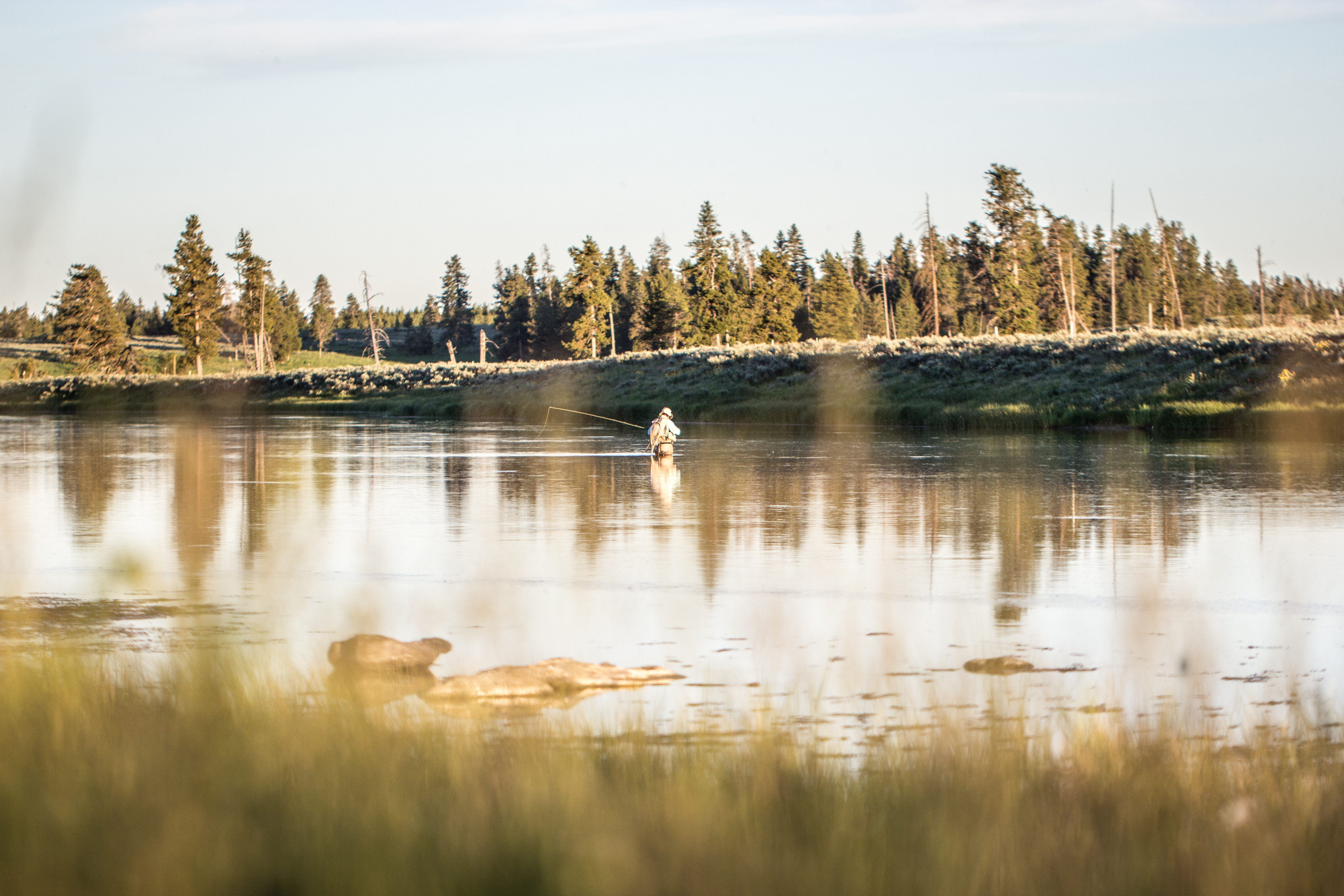 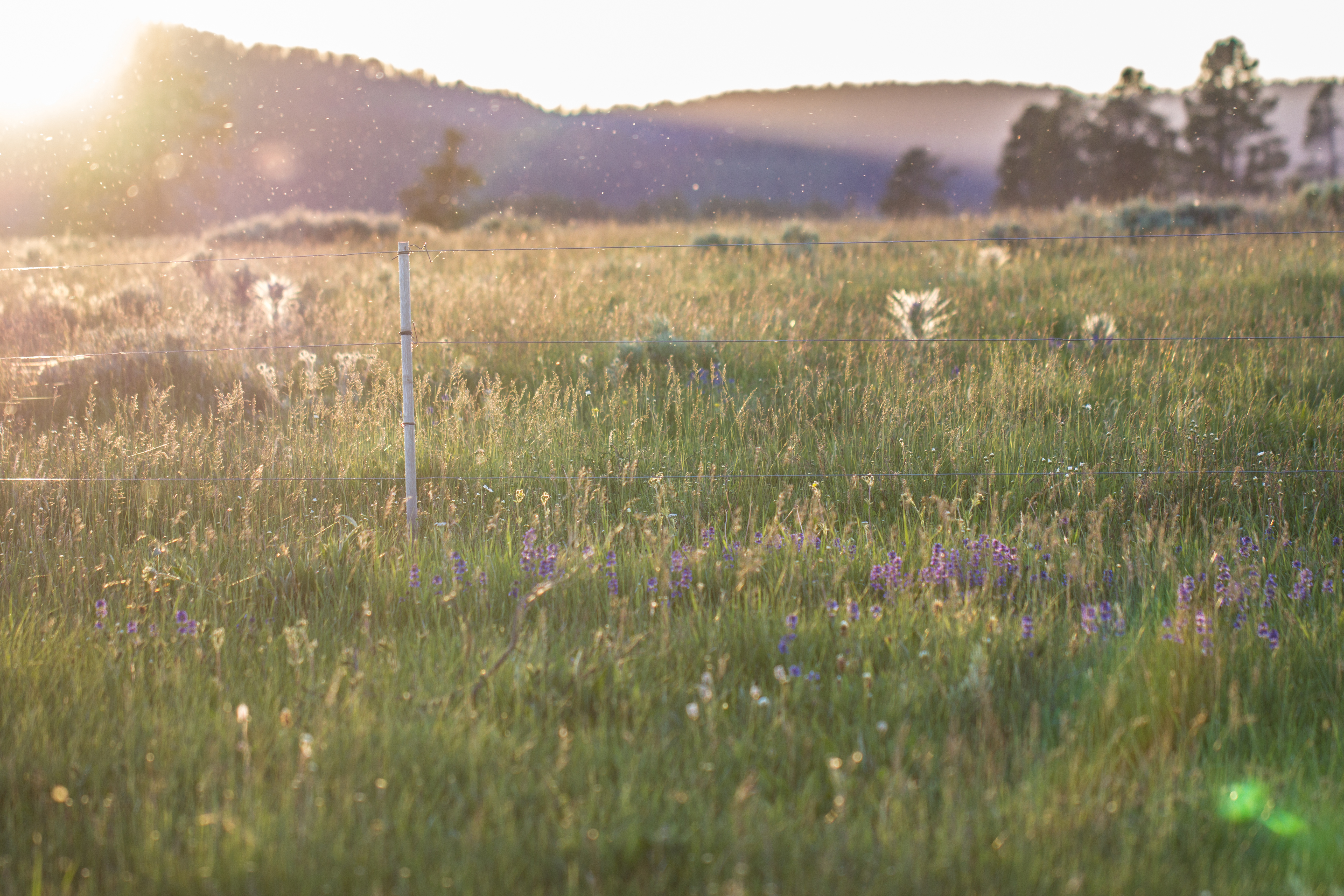 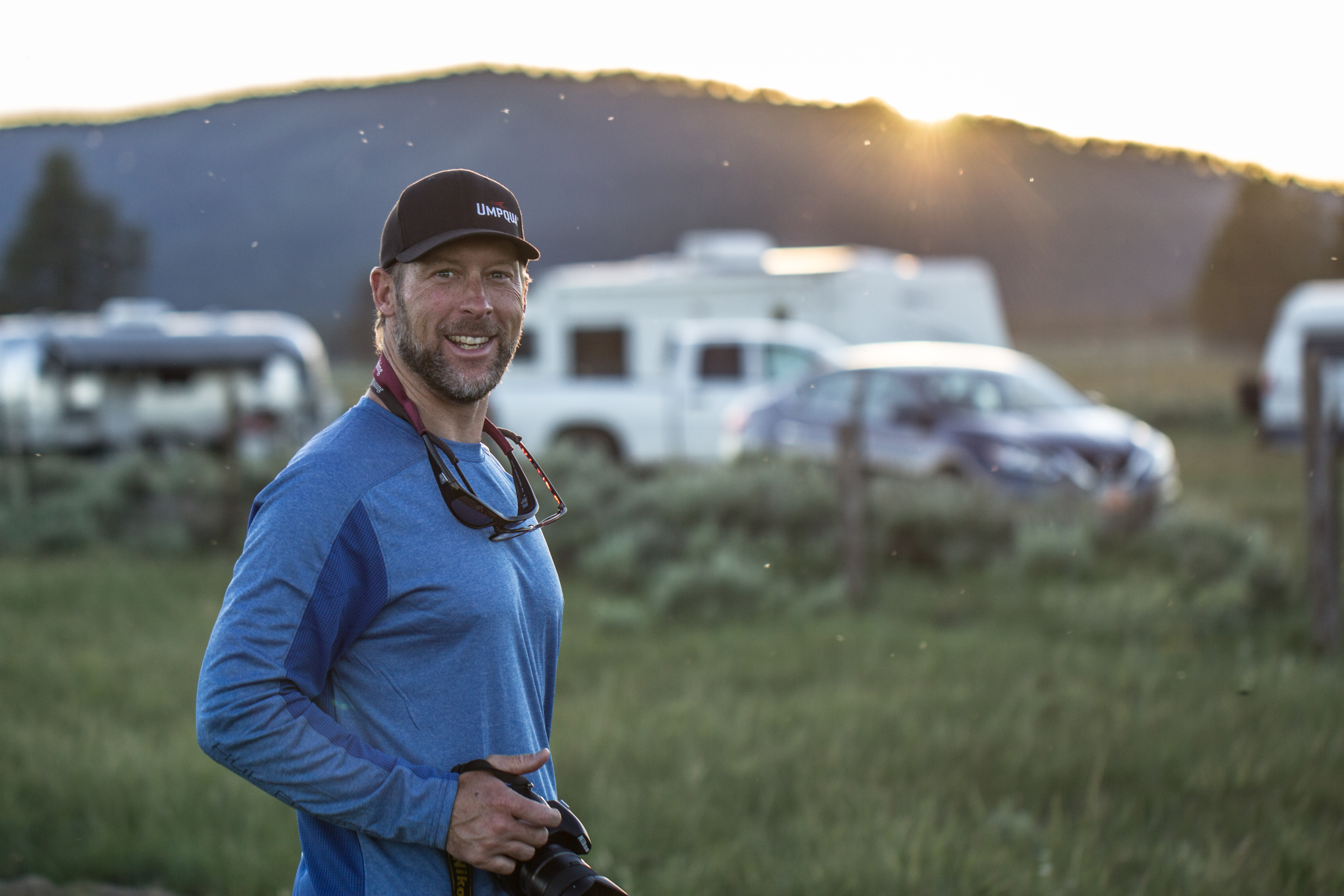 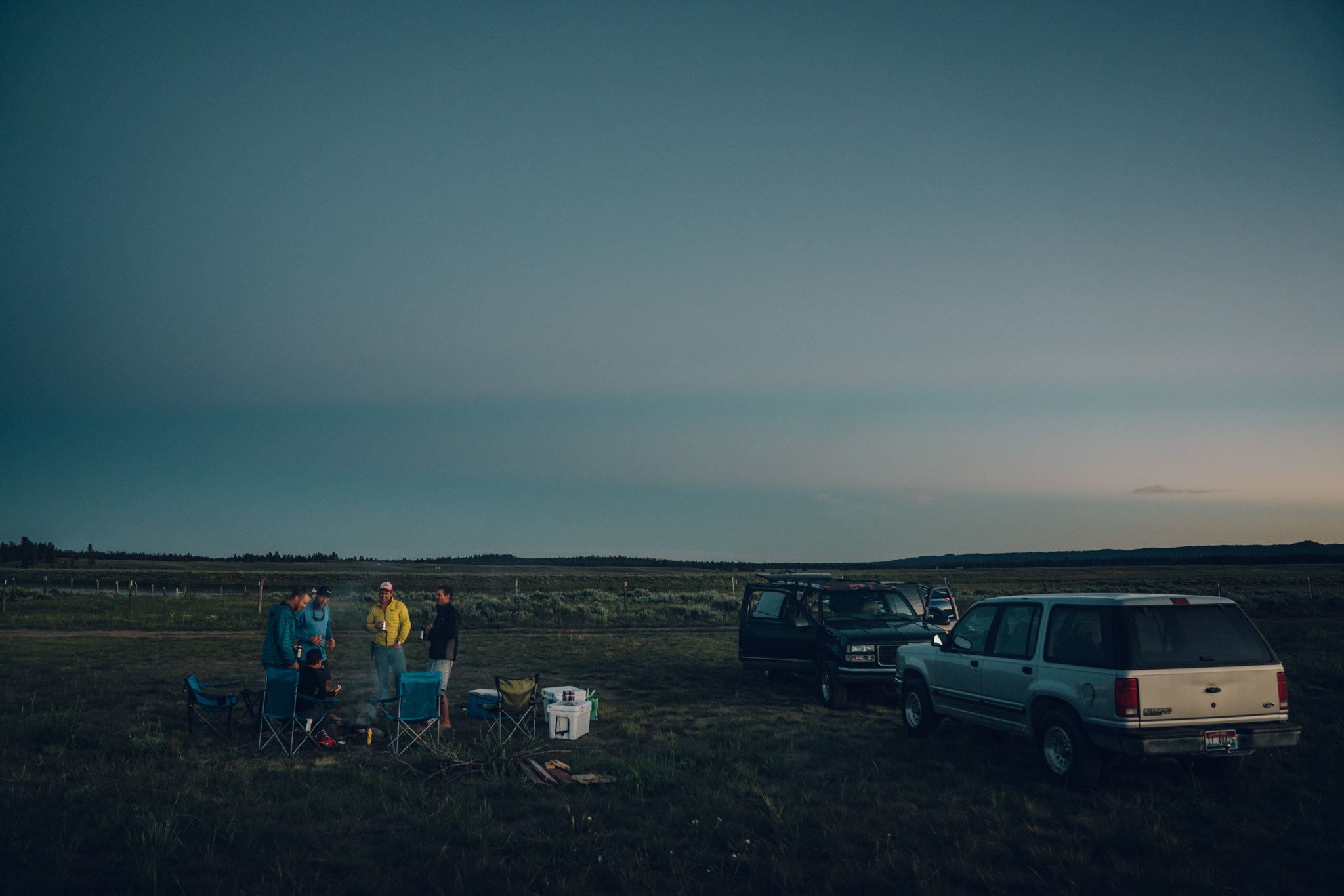 The thing about the longest day of the year is that it’s also the shortest night of the year. I was in a fog when the 5 am alarm sounded. We were soaked from the dew though so woke up and threw our things in the car and headed to the parking lot to lay out our things and make coffee. As the coffee was passed around, friends started showing up to join us for the marathon. As no one seemed to be in a hurry I decided it was only right to crack my first beer of the day. Everyone else thought it was a good idea too and moments later we all had beers in hand while we started the ceremonial walk to the ranch. 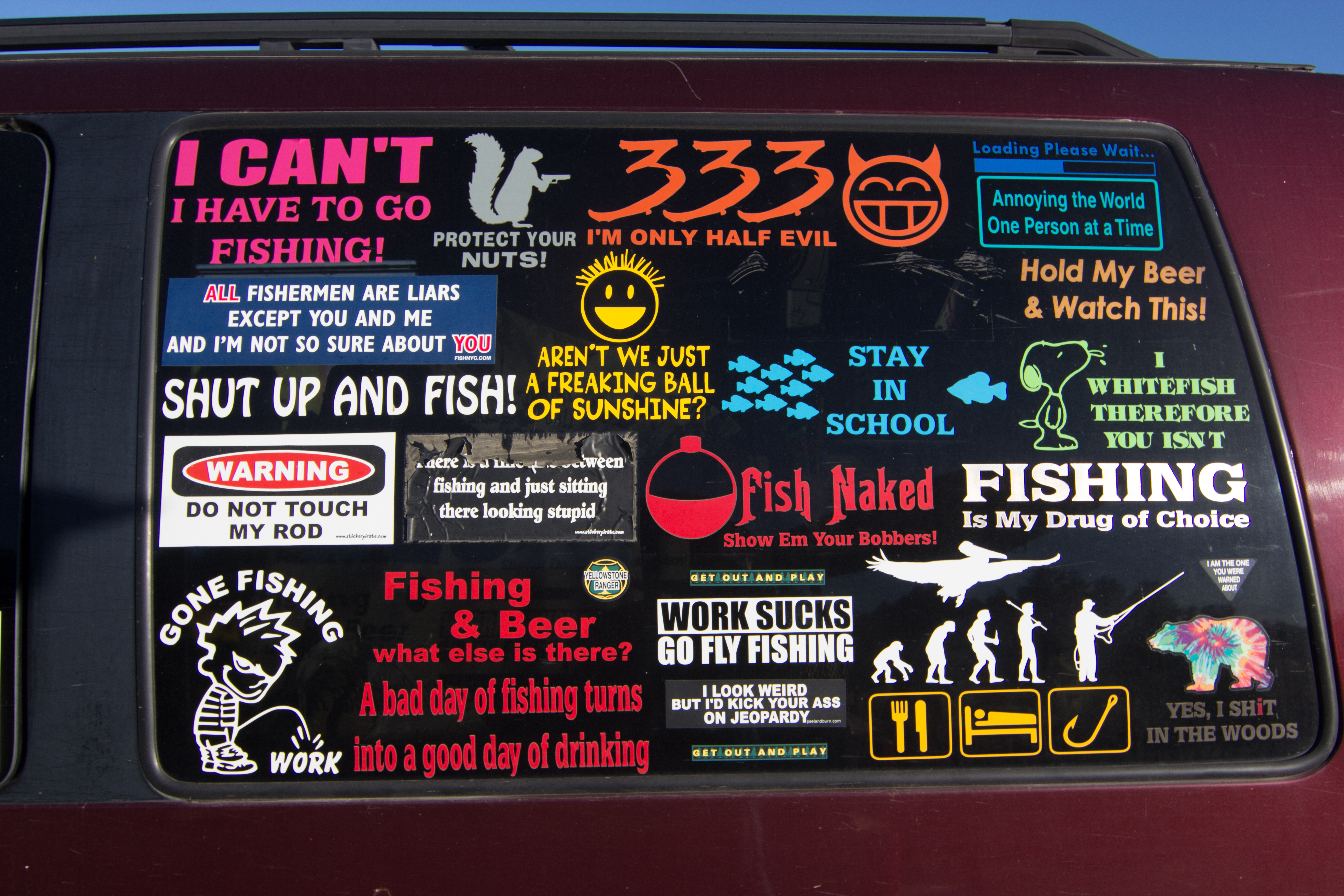 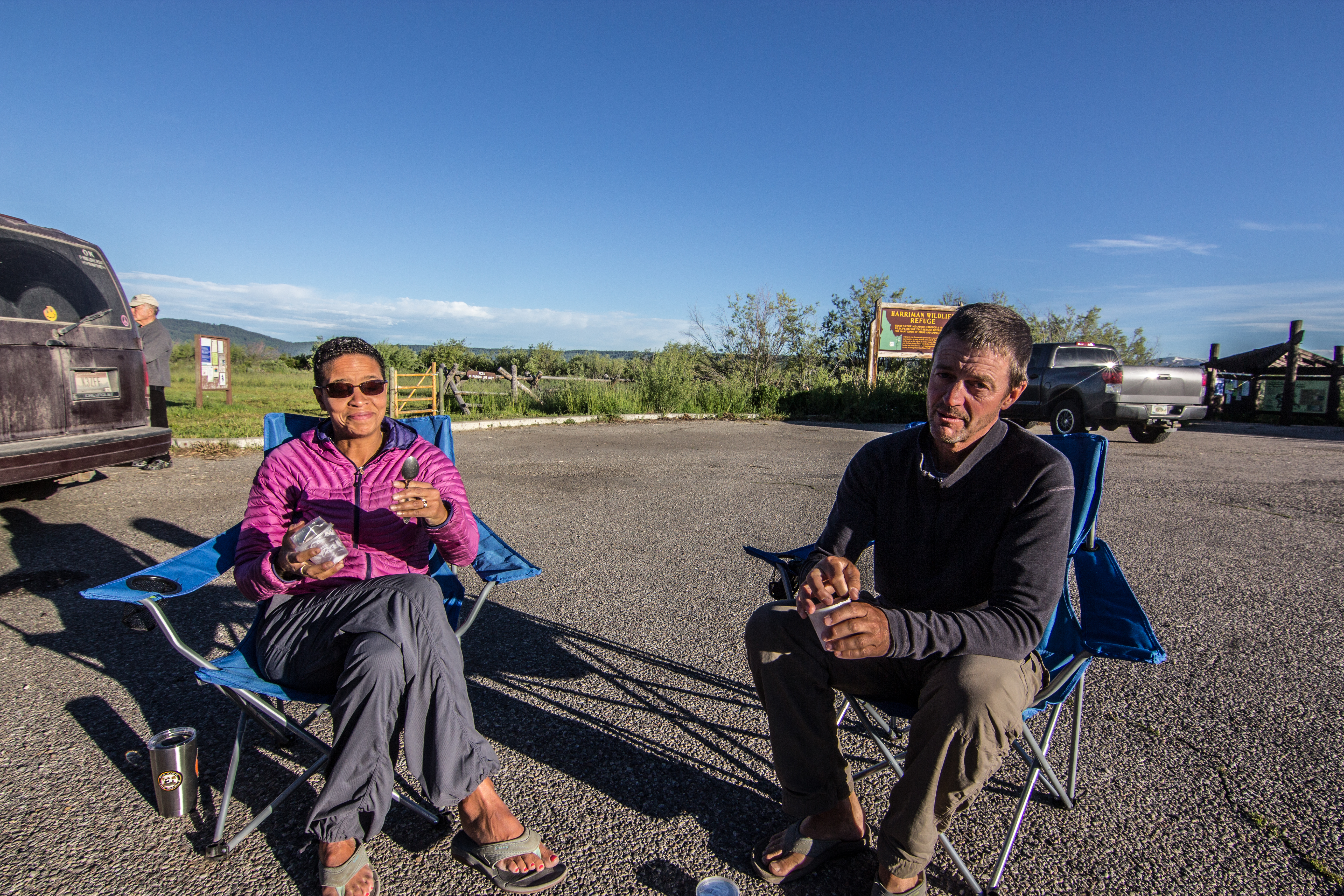 What I thought was going to be another slow early season day on the fork turned out to be an incredible day all around. At first, everyone enjoyed hanging together and drinking beer until Jack caught the first fish. Then all of the sudden there were big fish rising all around. The group split up pretty quickly after that, and I didn’t see them for another two hours. I decided I was going to get after it on my own so I crossed the river and got up on a high ridge. I had a great view from up there and was able to see everyone I knew casting at fish. I eventually spotted a fish close to me and walked to the bank and got rigged up. I fished a long leader with a small parachute hares ear. I made a couple great casts on the fish but he didn’t eat. In fact he gave me the middle fin and started moving up the bank but continued feeding almost as if to say yah right you idiot. 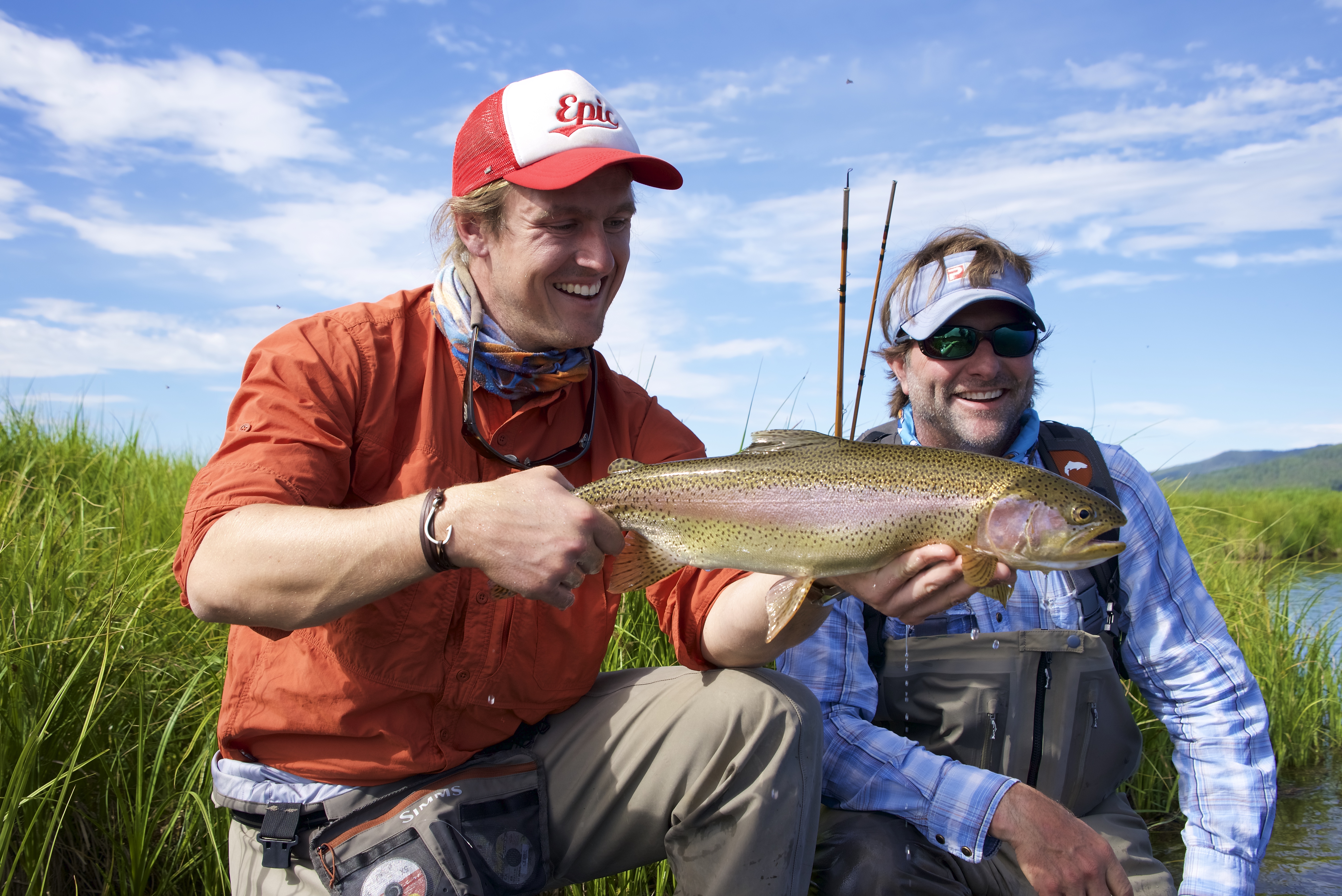 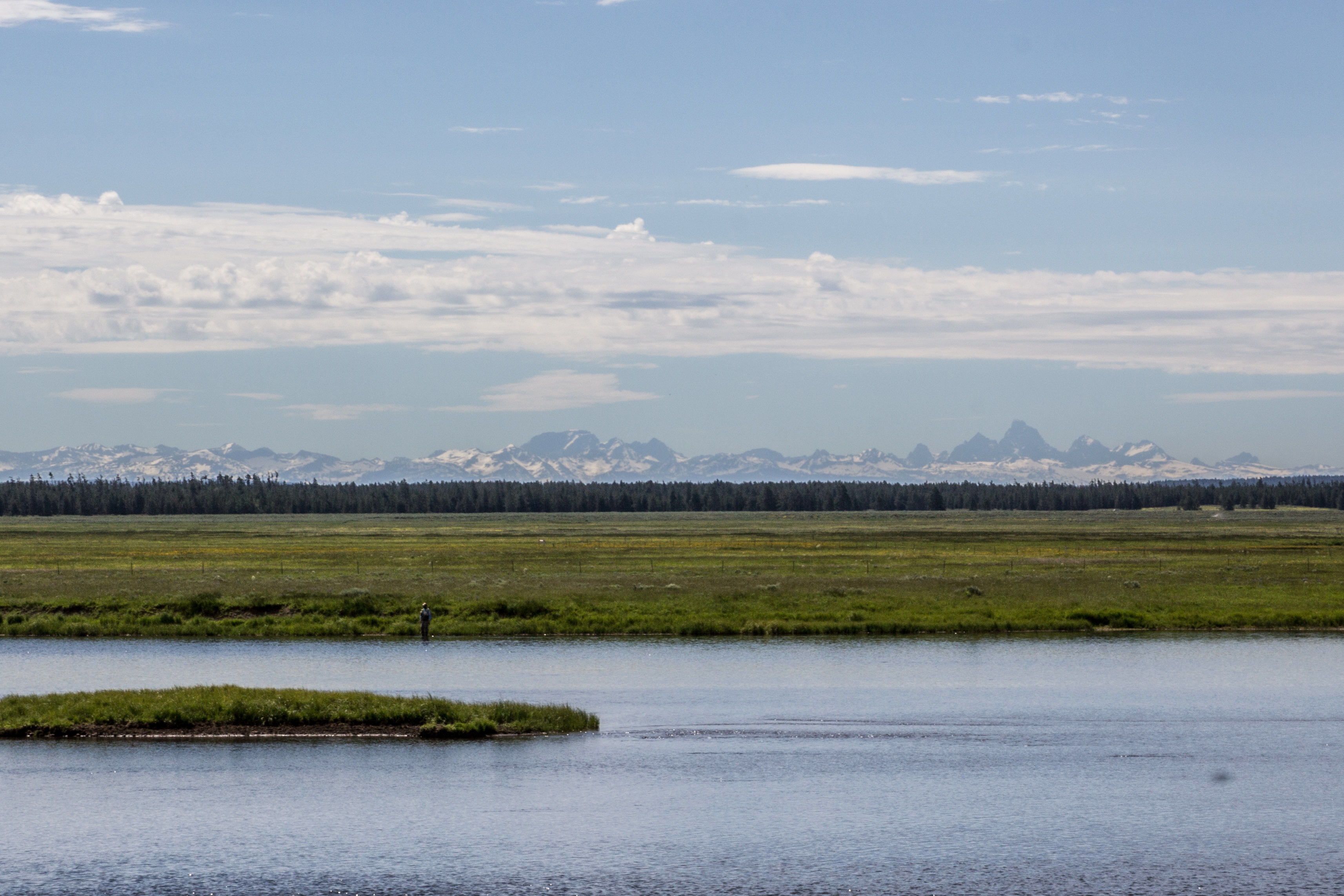 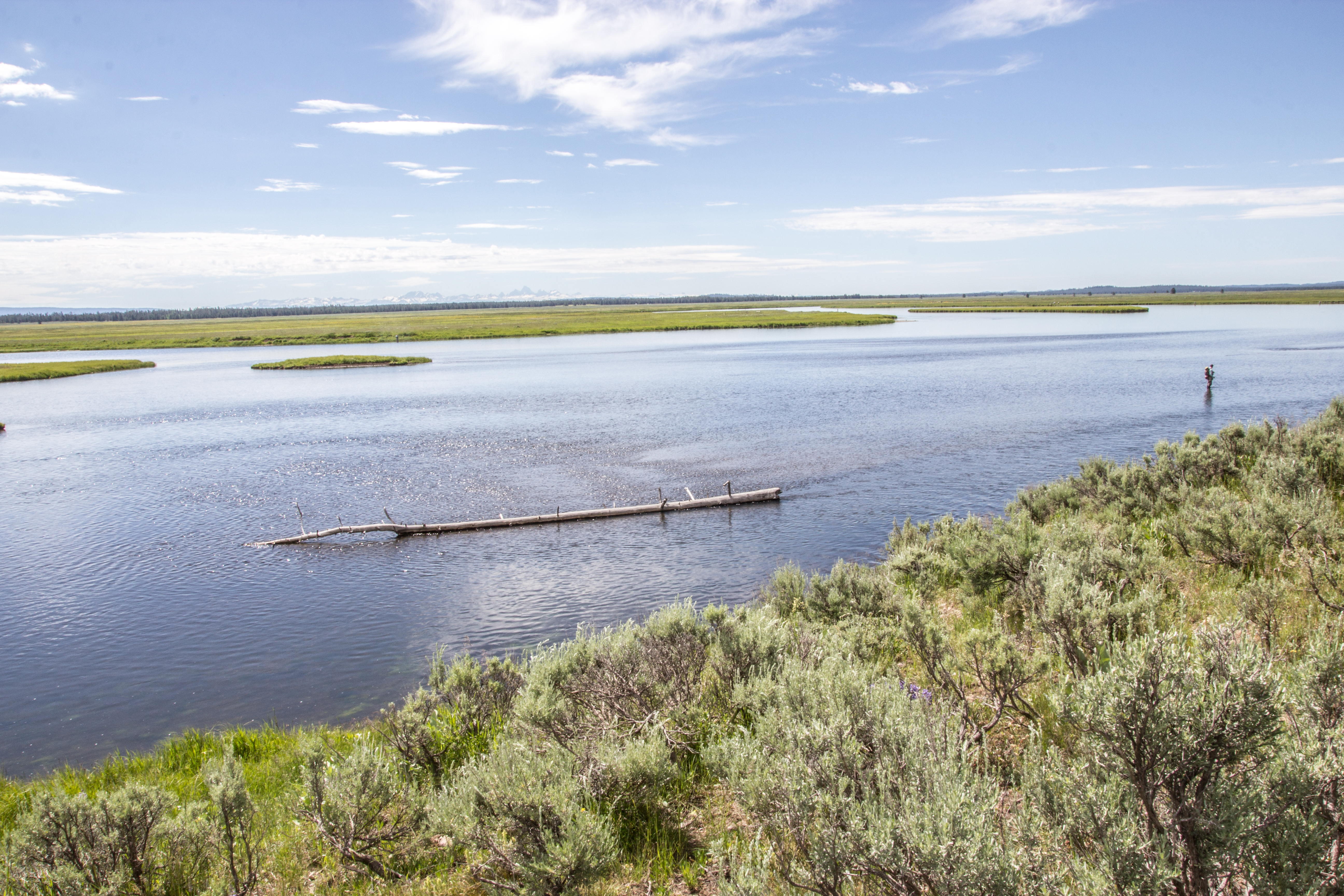 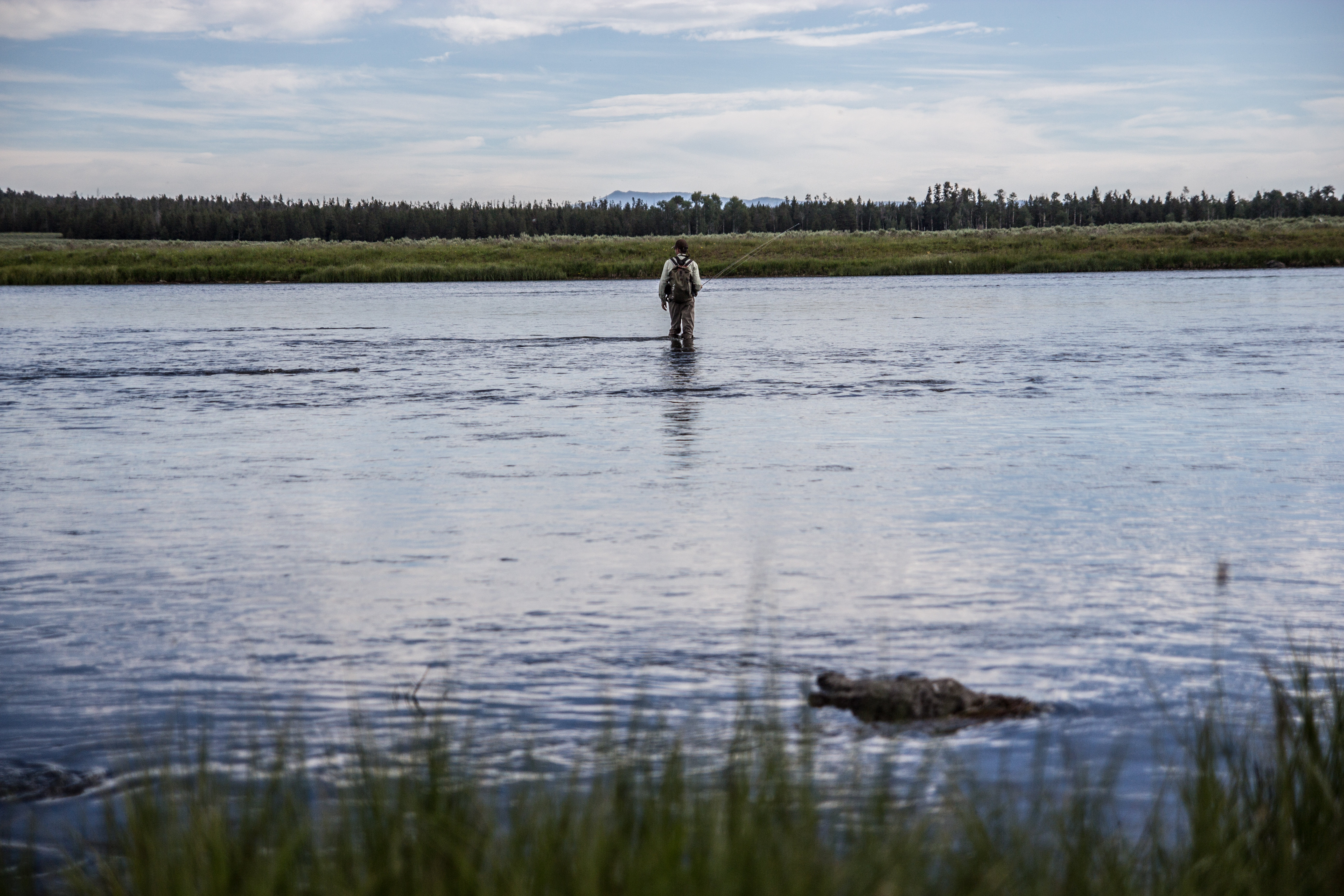 I met up with the group again and we sat and rolled cigarettes and drank a beer and eventually someone had the idea to just sit in the water. I joined and eventually we were all drinking beers and just sitting in the water. To tell you the truth the afternoon was very tough. The fishing was off due to the hot sun and bright skies. Luckily we had 10 more hours of fishing before dark so some of us took a nap while others tried fishing. Most of us made a run for the bridge to complete the marathon. 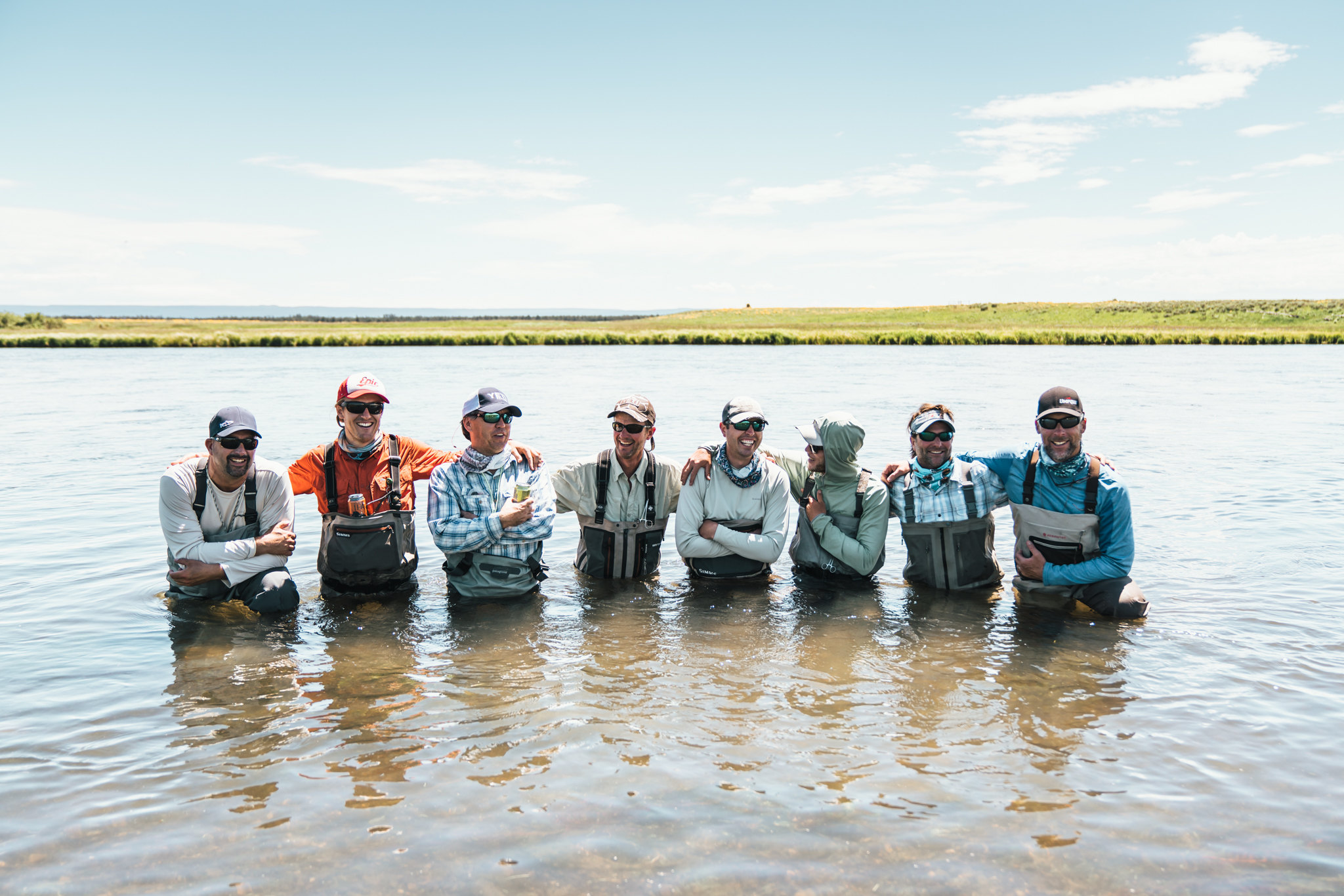 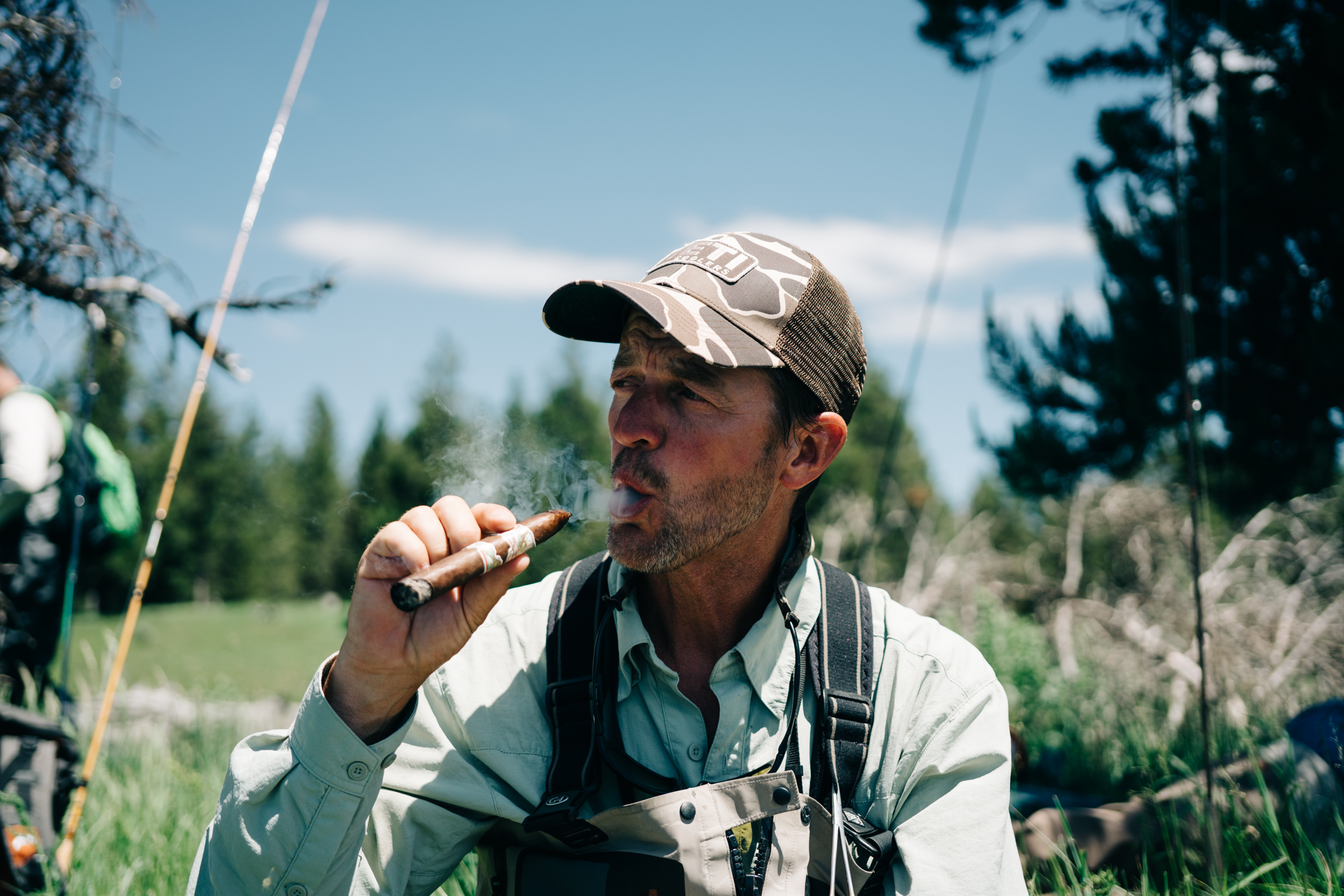 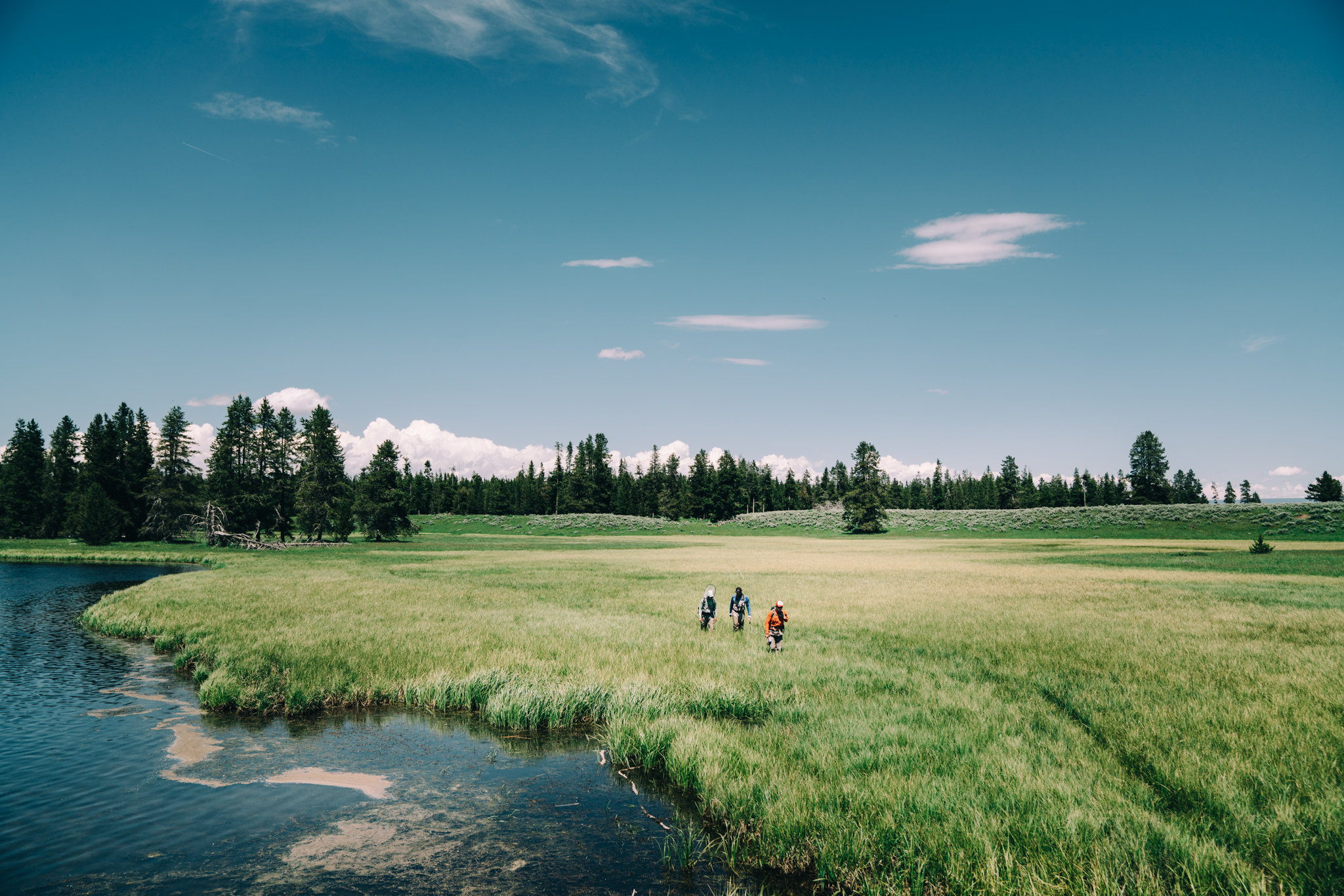 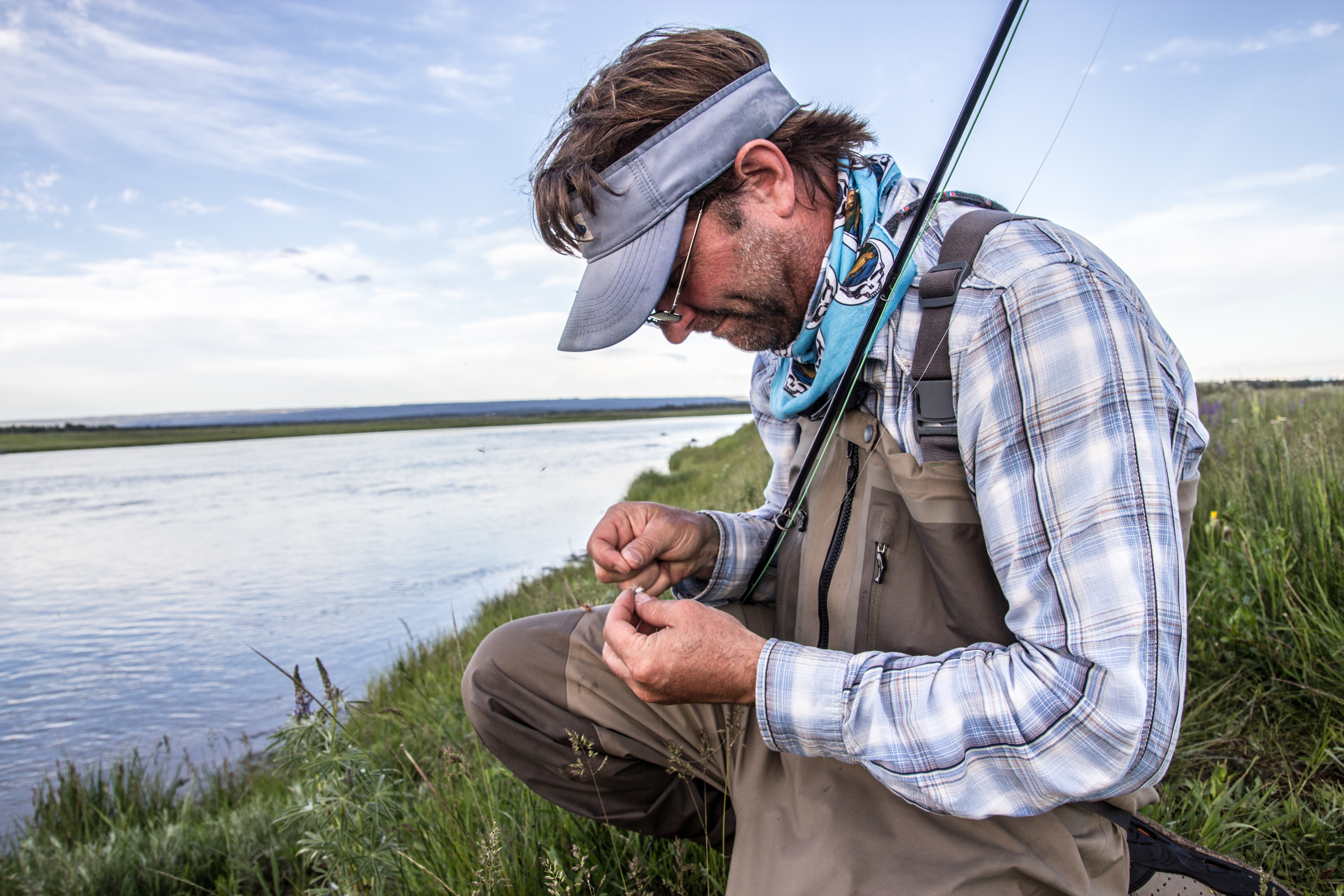 The later afternoon brought the most epic thunderstorm I have seen in a while. We split into groups and decided to walk and fish our way back to the parking lot, only 7 miles away. After the storm passed, the fishing was slow. It took until almost sunset for the fish to wake up. 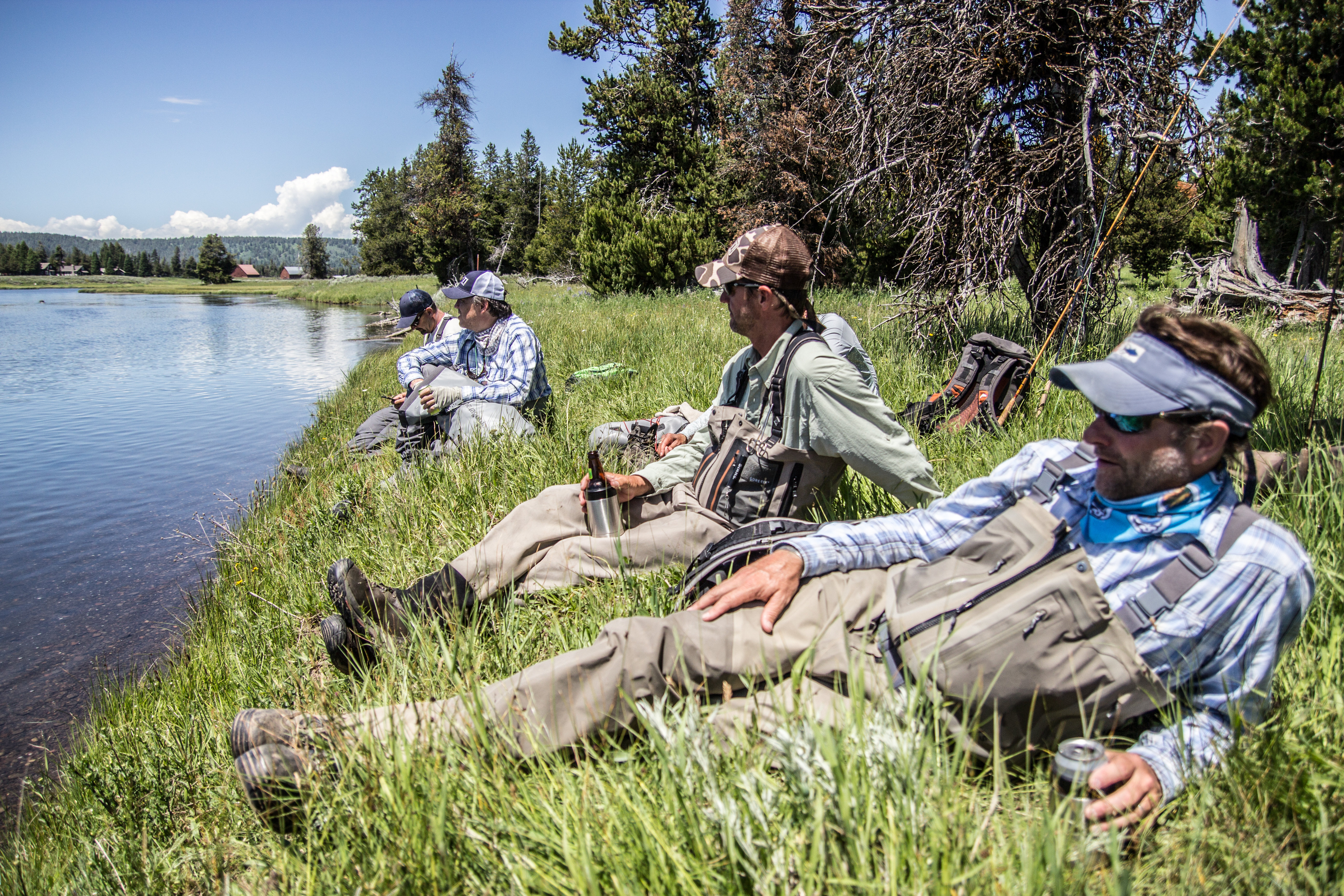 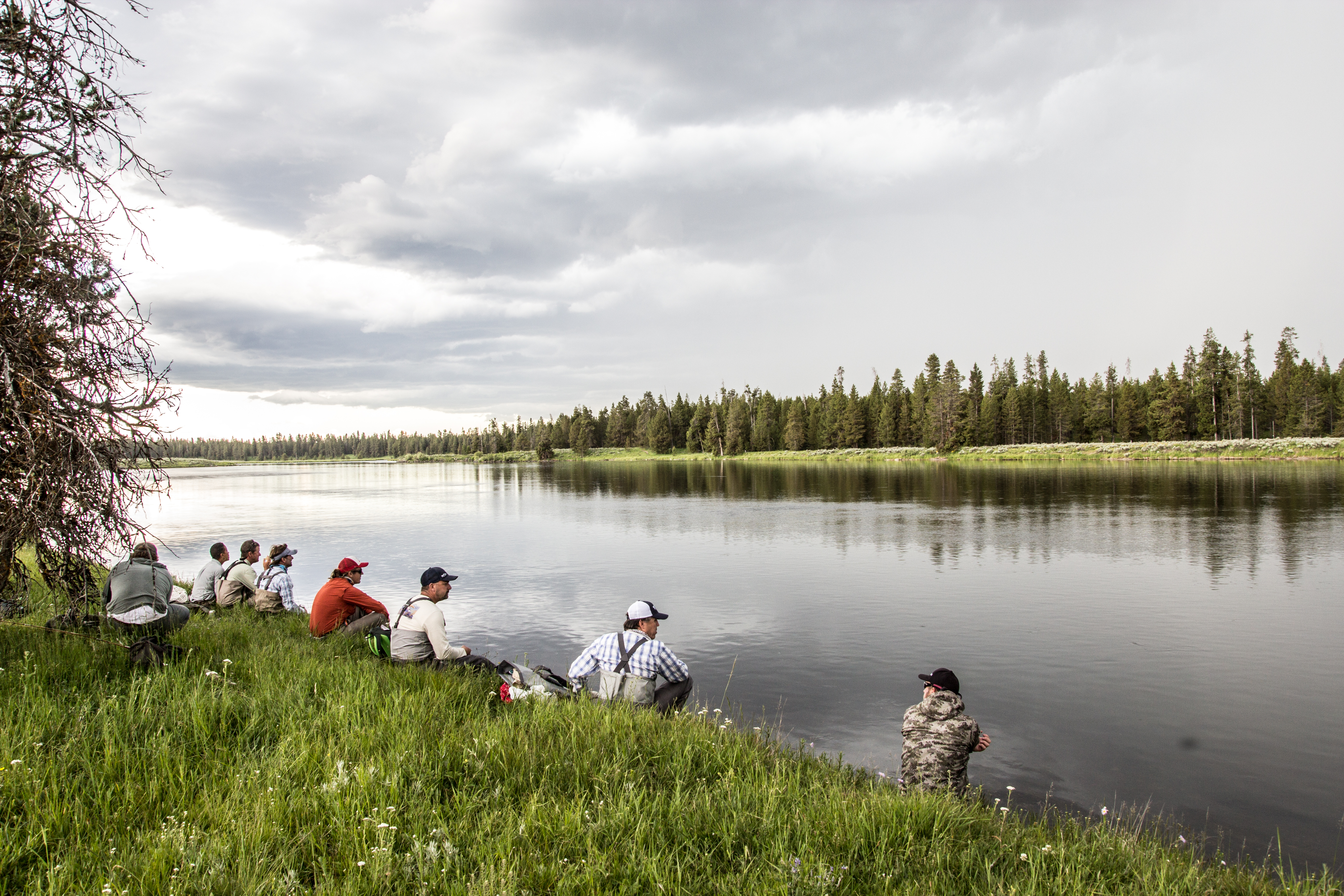 As the day started to wind down and we neared the parking lot, I got lucky. We were seeing the odd fish and not much happening until I spotted a toad on the bank just up stream from me. I didn’t want to waste time so immediately walked down to him and made a few casts. Scott and Tim were watching as I laid out a good cast for distance, then picked up and laid out a perfect cast for presentation. The fish ate the fly within three drifts! This was a stunning 19 inch rainbow that ate a spent caddis dry fly. 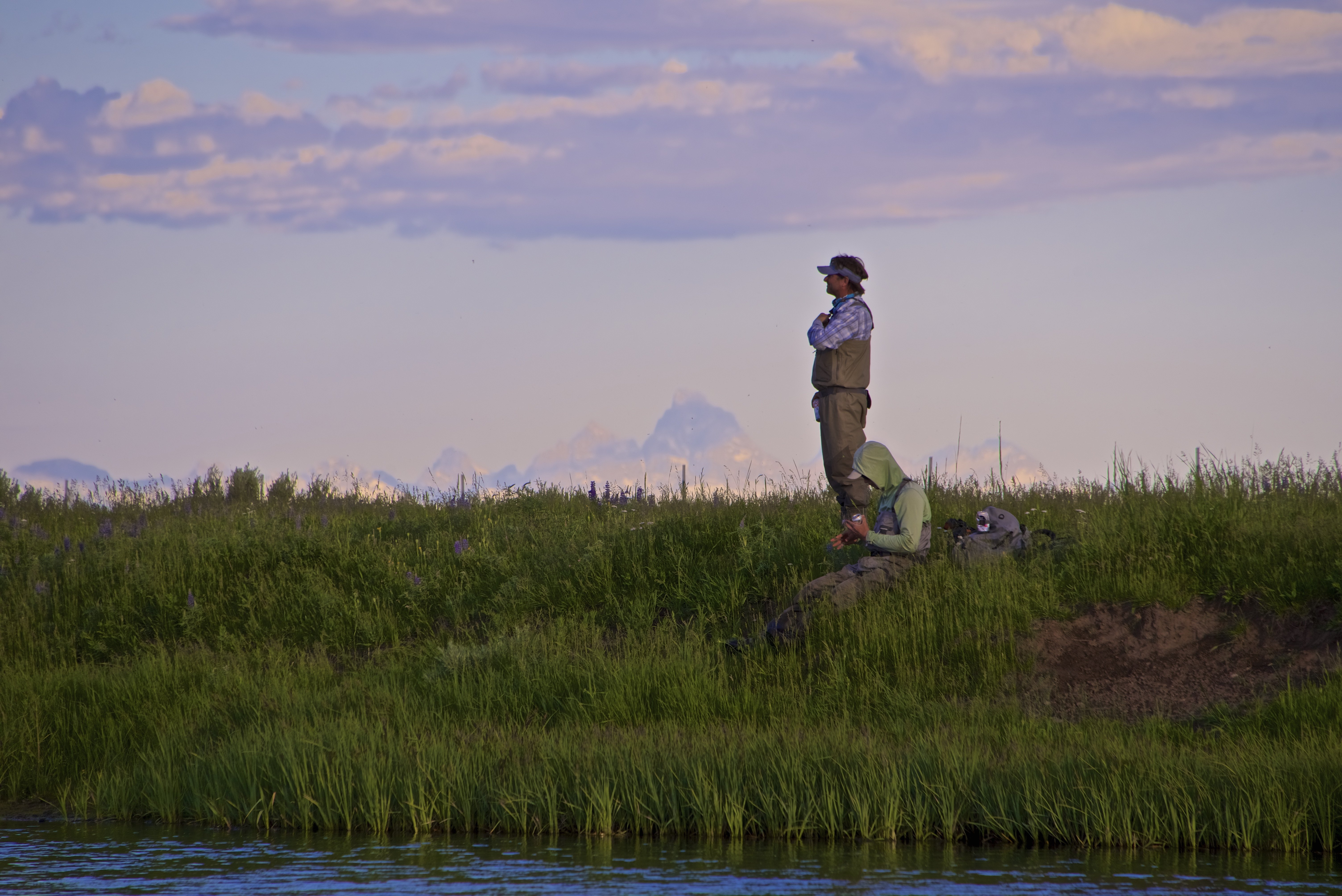 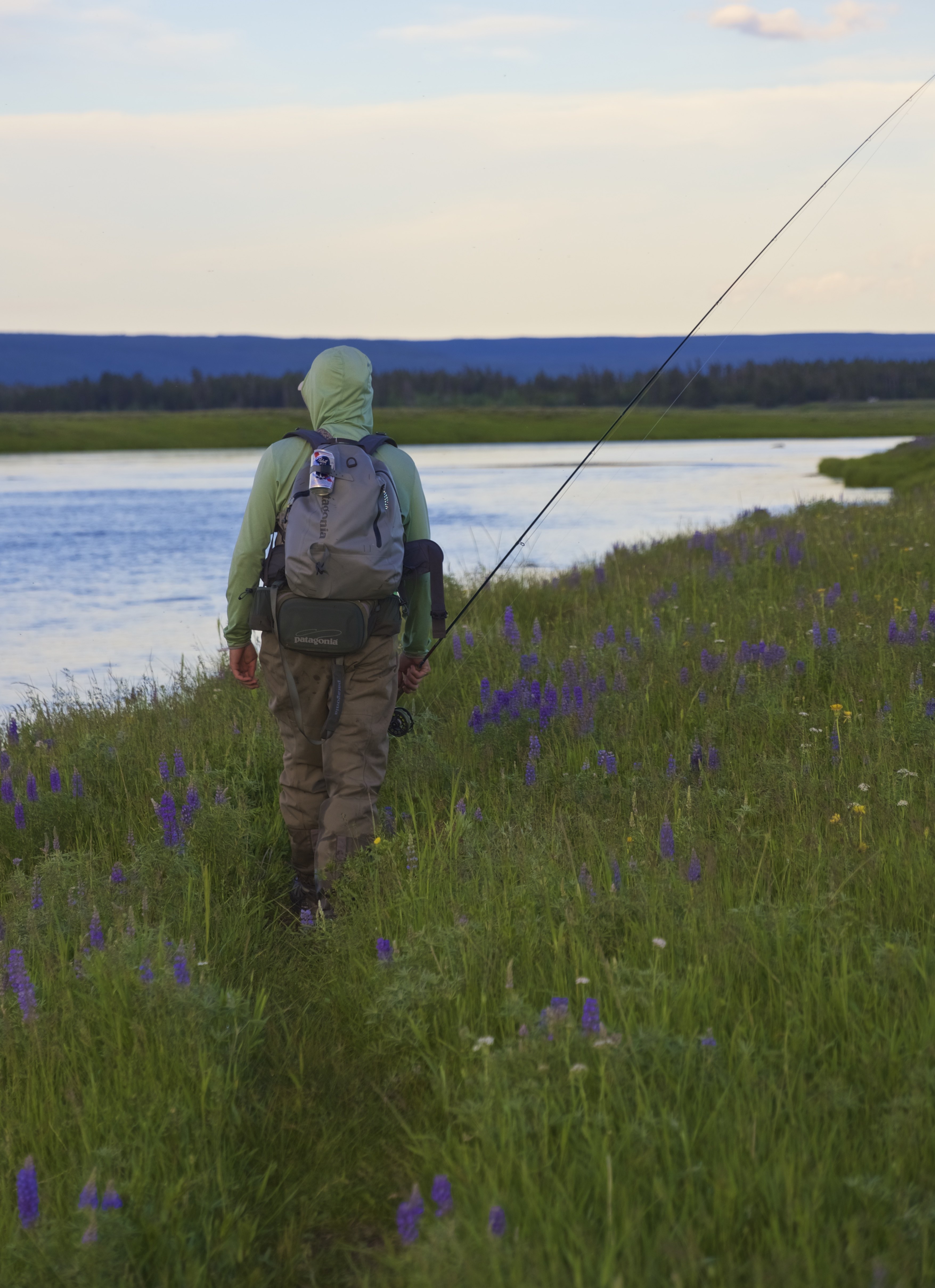 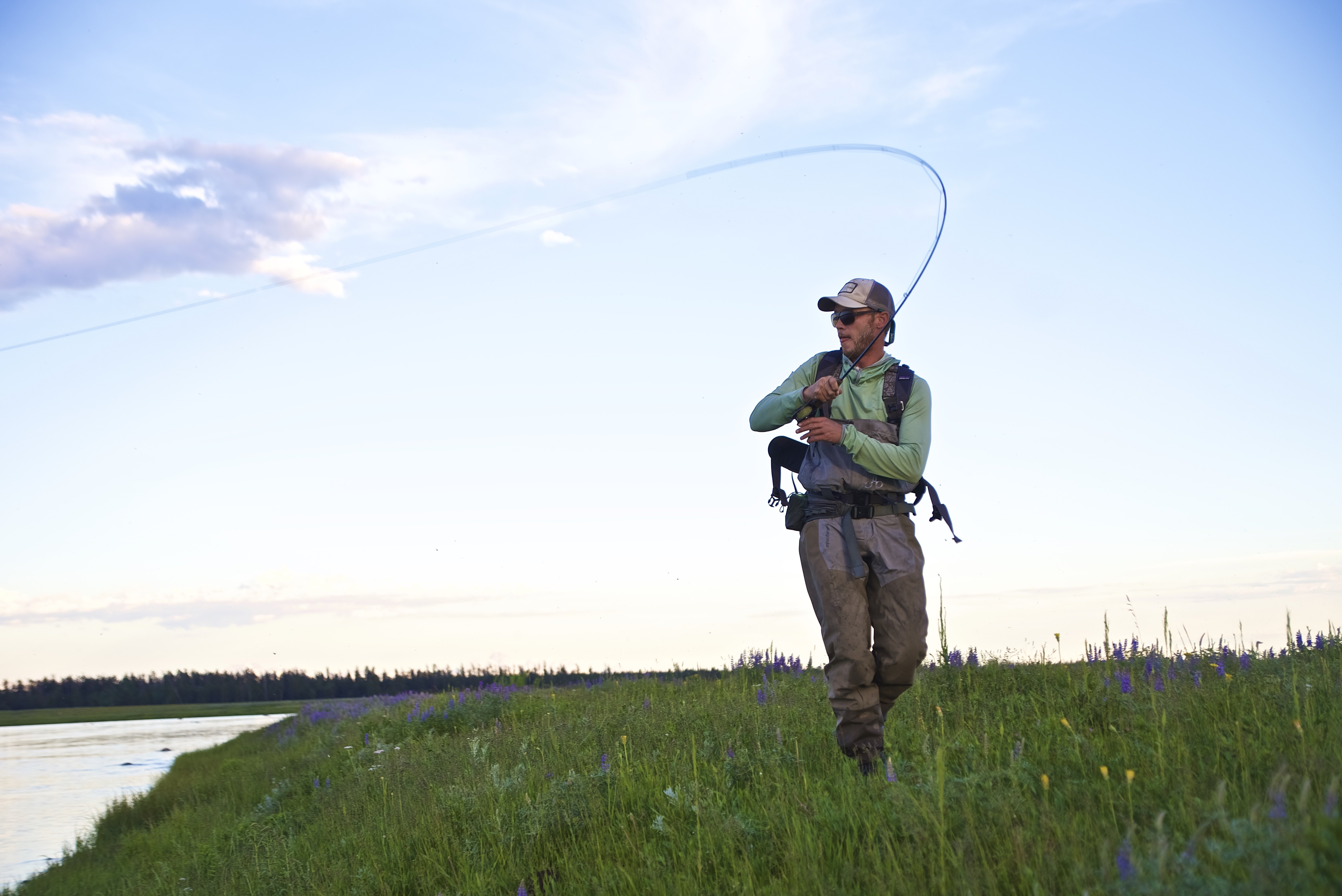 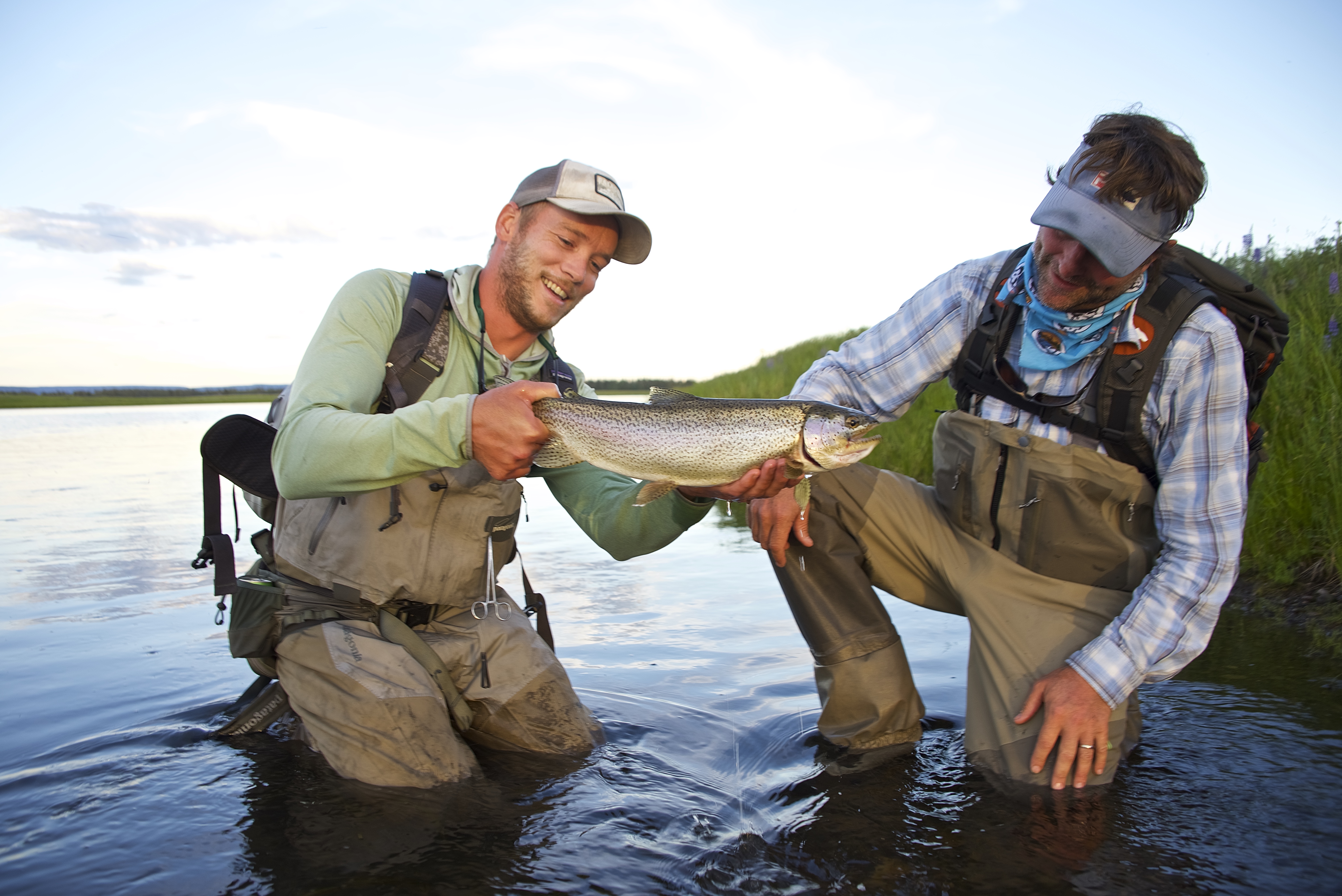 As the night closed in around us we walked back to the parking lot as the most beautiful sunset was taking place. It went on forever as did the walk. Someone made the mistake of bringing up the juicy burgers at the trout hunter. So we sat and had a burger with the rest of the gang before our long car ride home. I walked in the door at 1 in the morning and was up at 5:45 for a big day guiding Lewis Lake. I don’t think life could be any better! 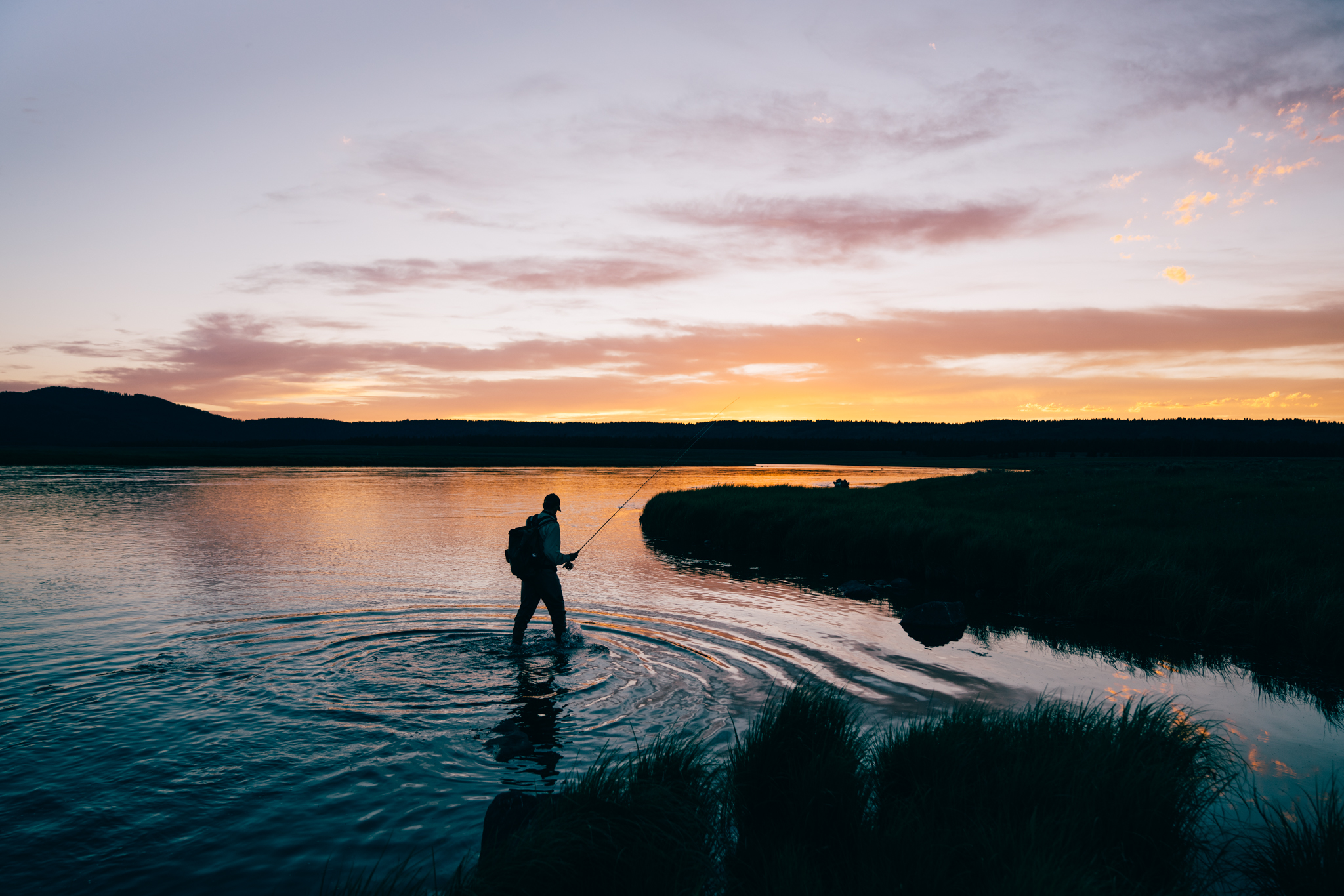