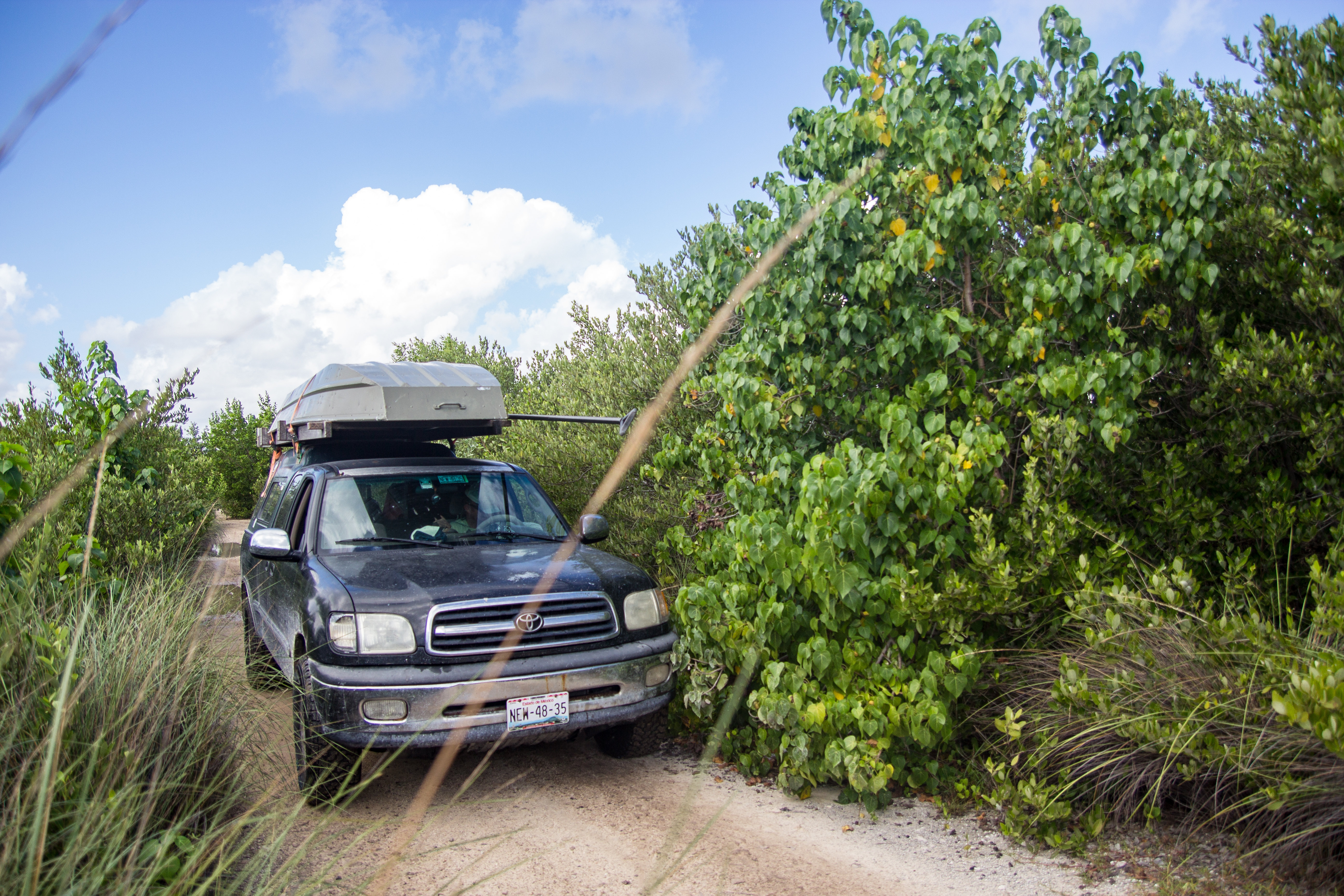 Jess and I hired Nick Denbow for a day on the flats. He took us through the maze of back roads weaving through mangrove forests. At one point Nick pointed to a puddle in the middle of the dirt road. “During a heavy rain, the brackish water in the mangroves starts to rise and floods the road. I’ve caught tarpon right here in this puddle.” I tried to picture huge tarpon swimming up and down these flooded dirt roads but couldn’t quite wrap my head around it. 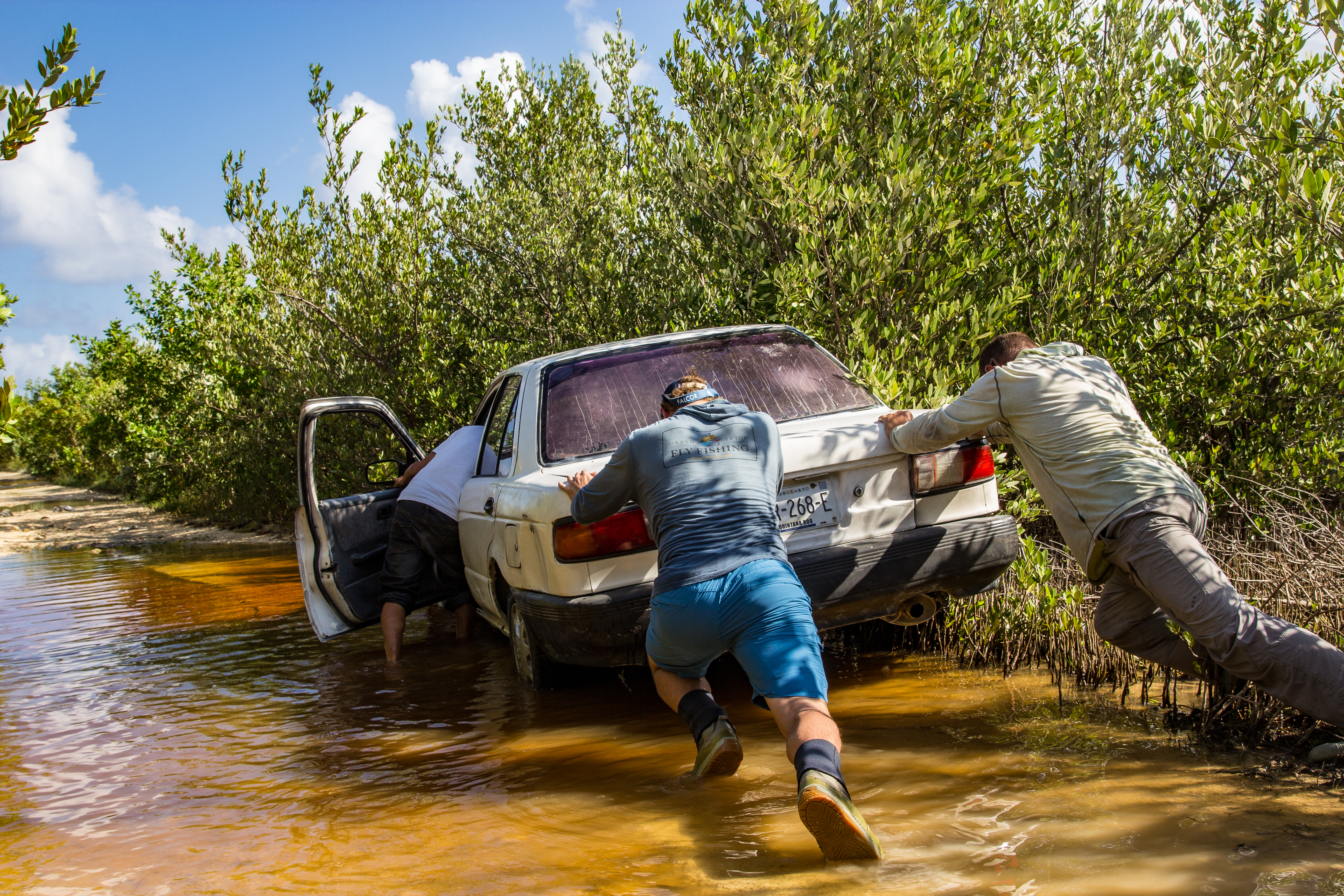 We came across these guys that had tried to drive their car through a two foot deep puddle. After an hour we were able to pull their dead car back to the main highway. 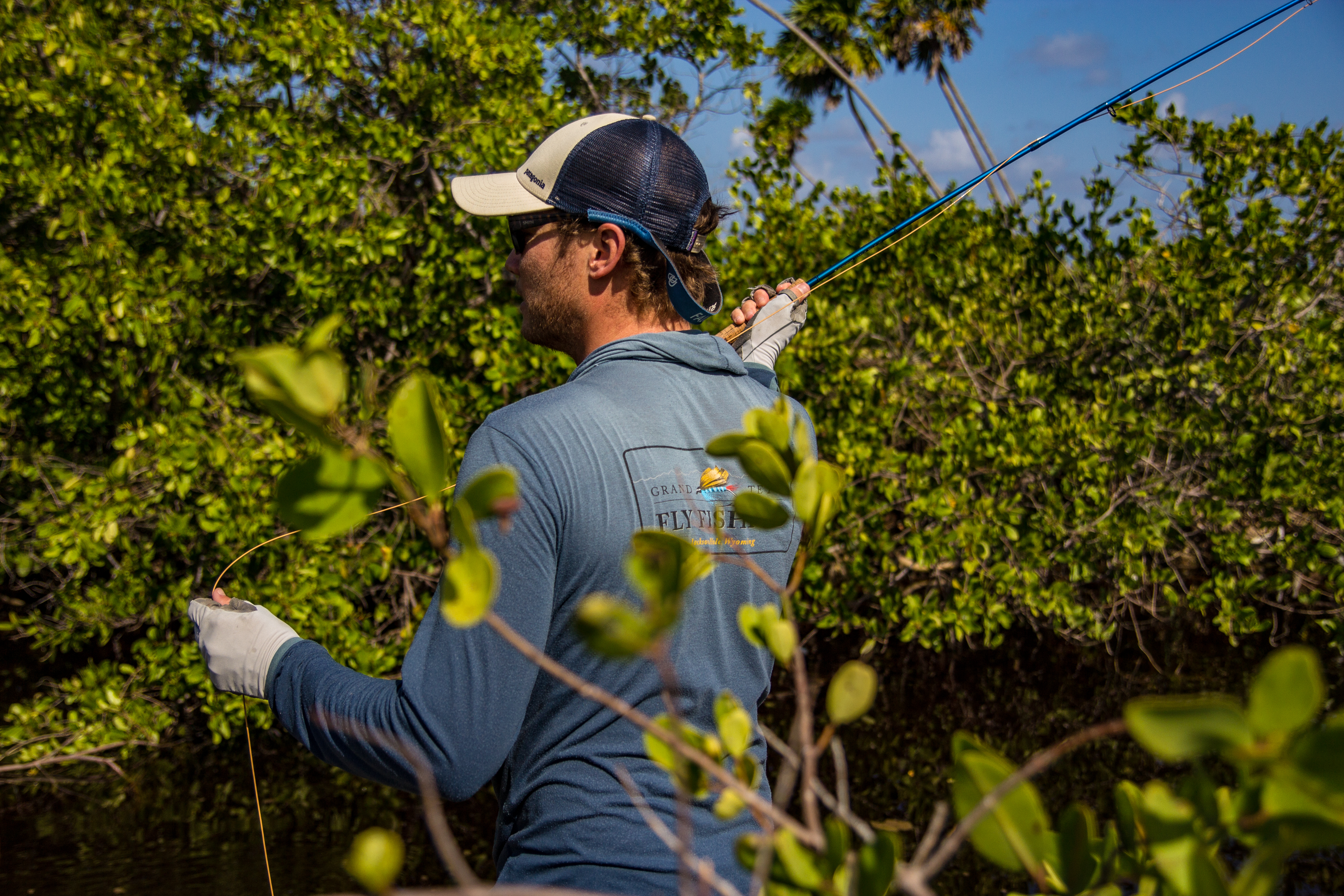 At one point during the day Nick took us to a tiny little creek that dumped into the ocean. It was full of baby snook and tarpon. They were so small in fact, I couldn’t keep them on! We turned around once Nick told us of the 12 foot crocodile living nearby. 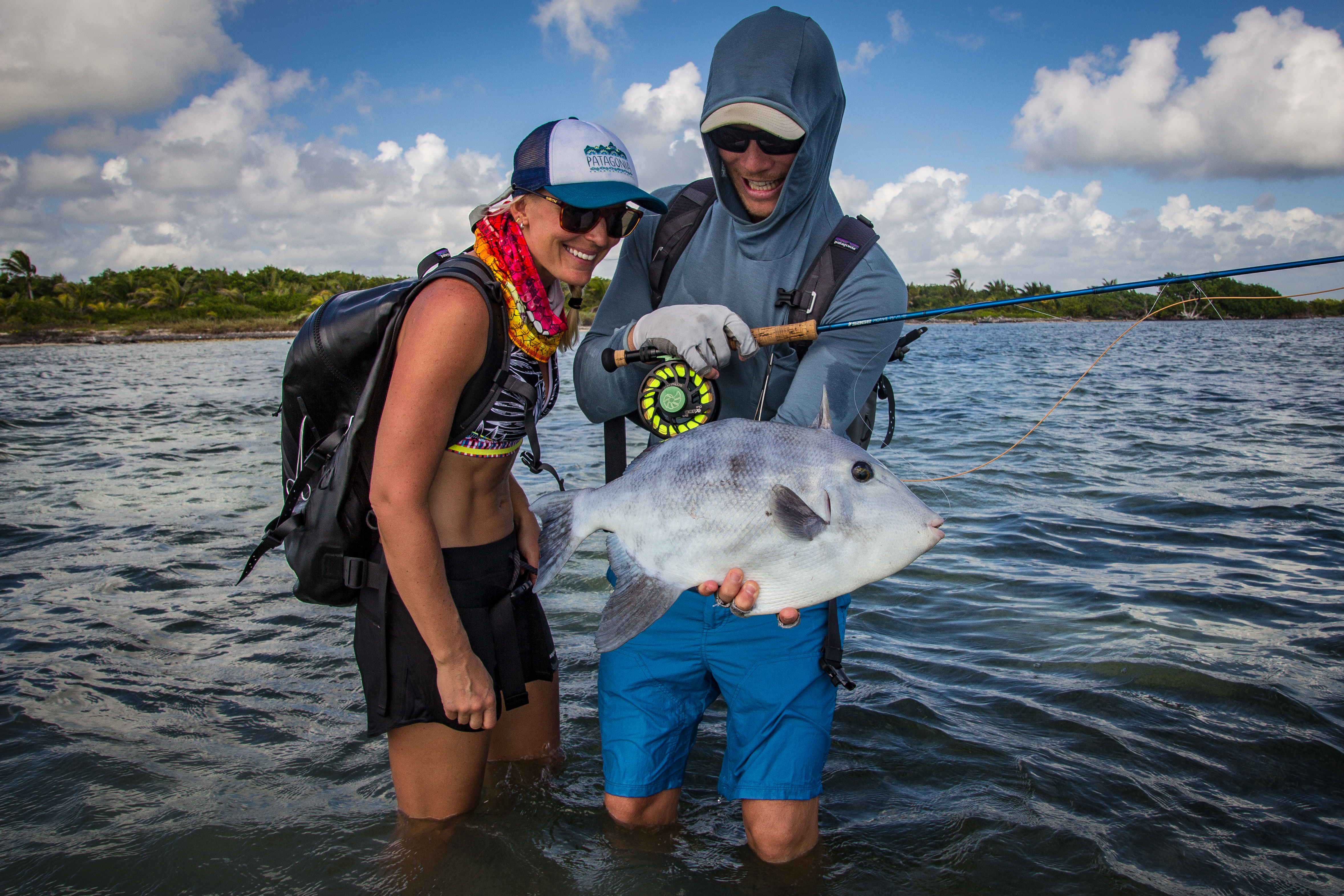 We waded an incredible flat for a good four hours. It was full of life. We saw baby permit, snook, bonefish, and of course lots of these big playful triggerfish. If you have never practiced on triggerfish, I would suggest you try them out! This fish has an incredible temperament and is a blast to cast to and feed. This fish will teach you the meaning of flats craft and precise casting! 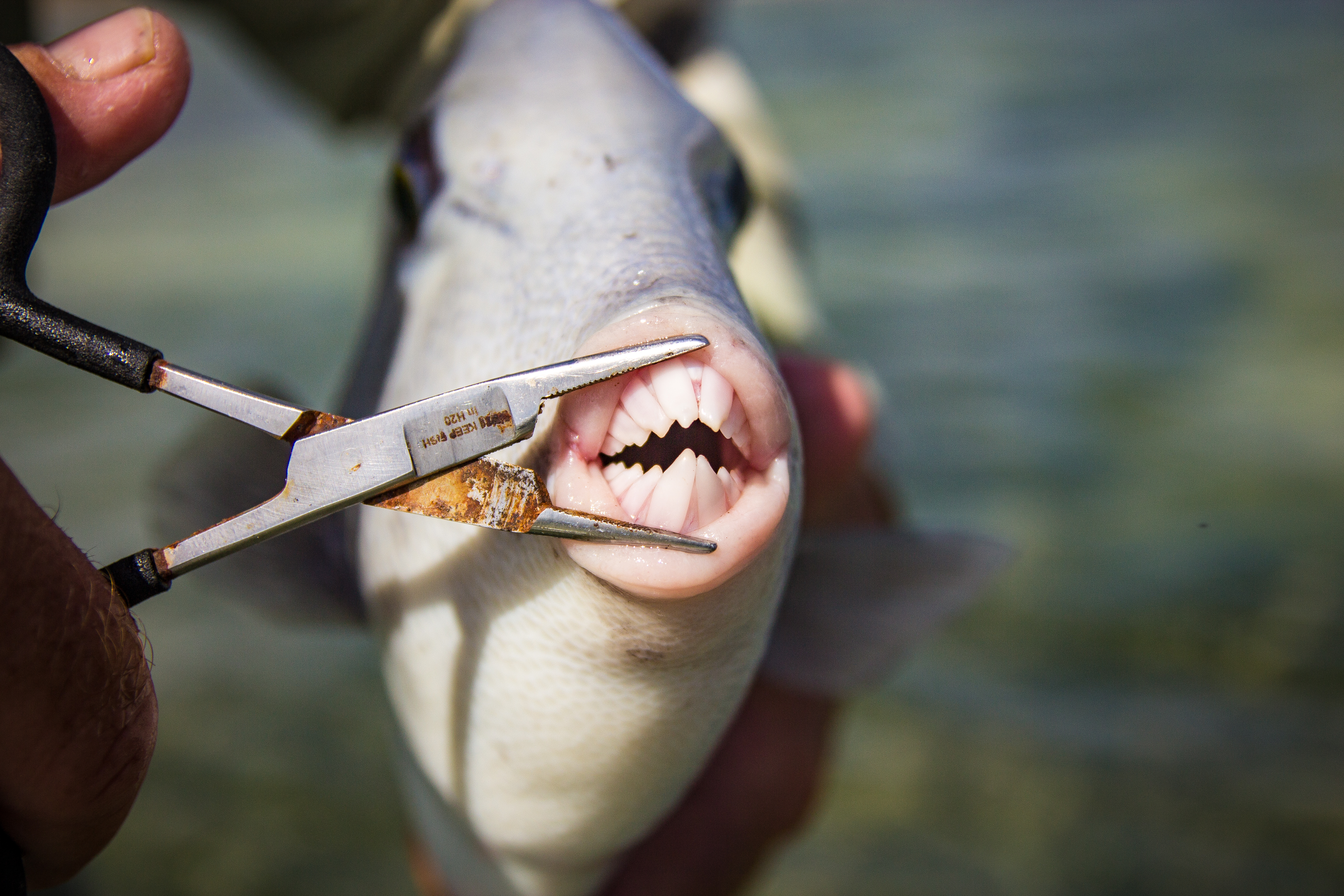 What an incredible creature! While wading the flats, your often scanning back and forth looking for the less obvious movement or wake or nervous water. Most of the time the fish doesn’t show himself easy. The trigger fish is a completely different creature. They put their tail way up in the air and out of the water almost as if to wave at all other predators on the flat. Getting them to eat and keeping them on is a completely different story though. You may land 1 out of 5 triggerfish you hook due to these sharp teeth. 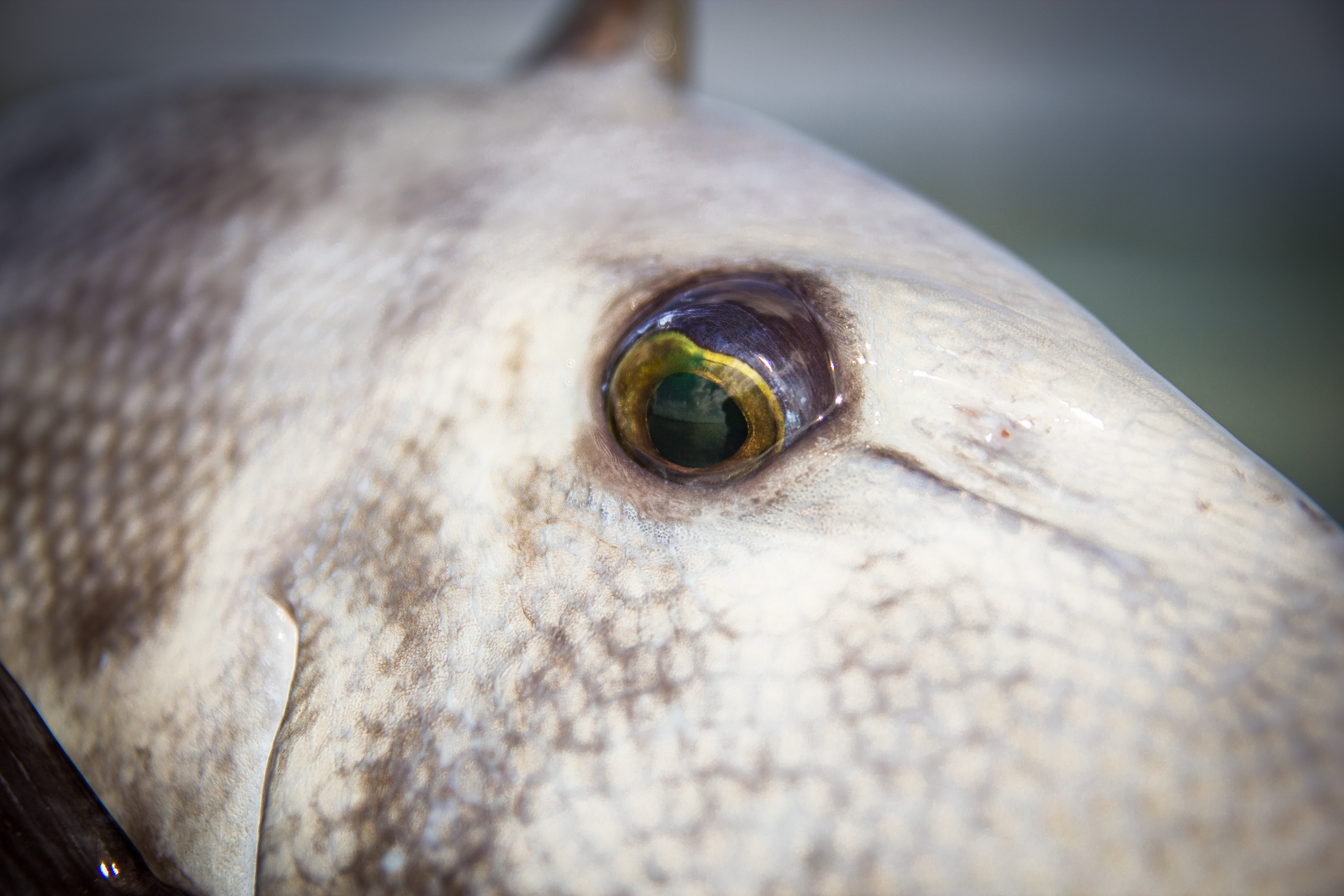 This big beautiful eye is capable of seeing any sort of crab or shrimp with in a 10 foot radius. It’s amazing what a little strip at the right moment can do. Often times these fish will let you cast and cast and even a fly change or two before they spook. 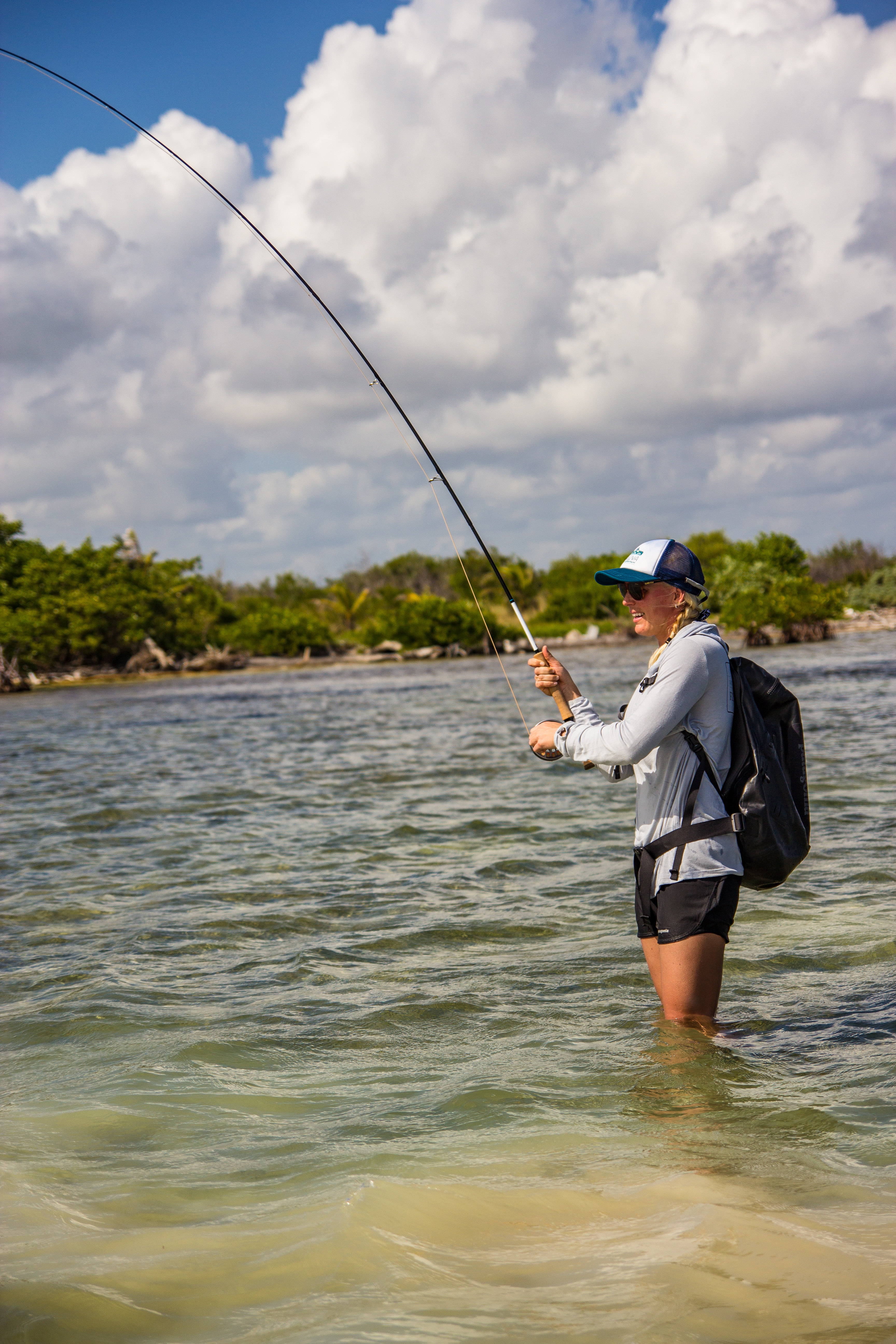 Jess spotted and casted and re casted to a trigger fish, and it was one of the most incredible things to witness. She is at the best stage of the fly fishing progression. She doesn’t give a damn what she catches as long as it puts up a good fight! 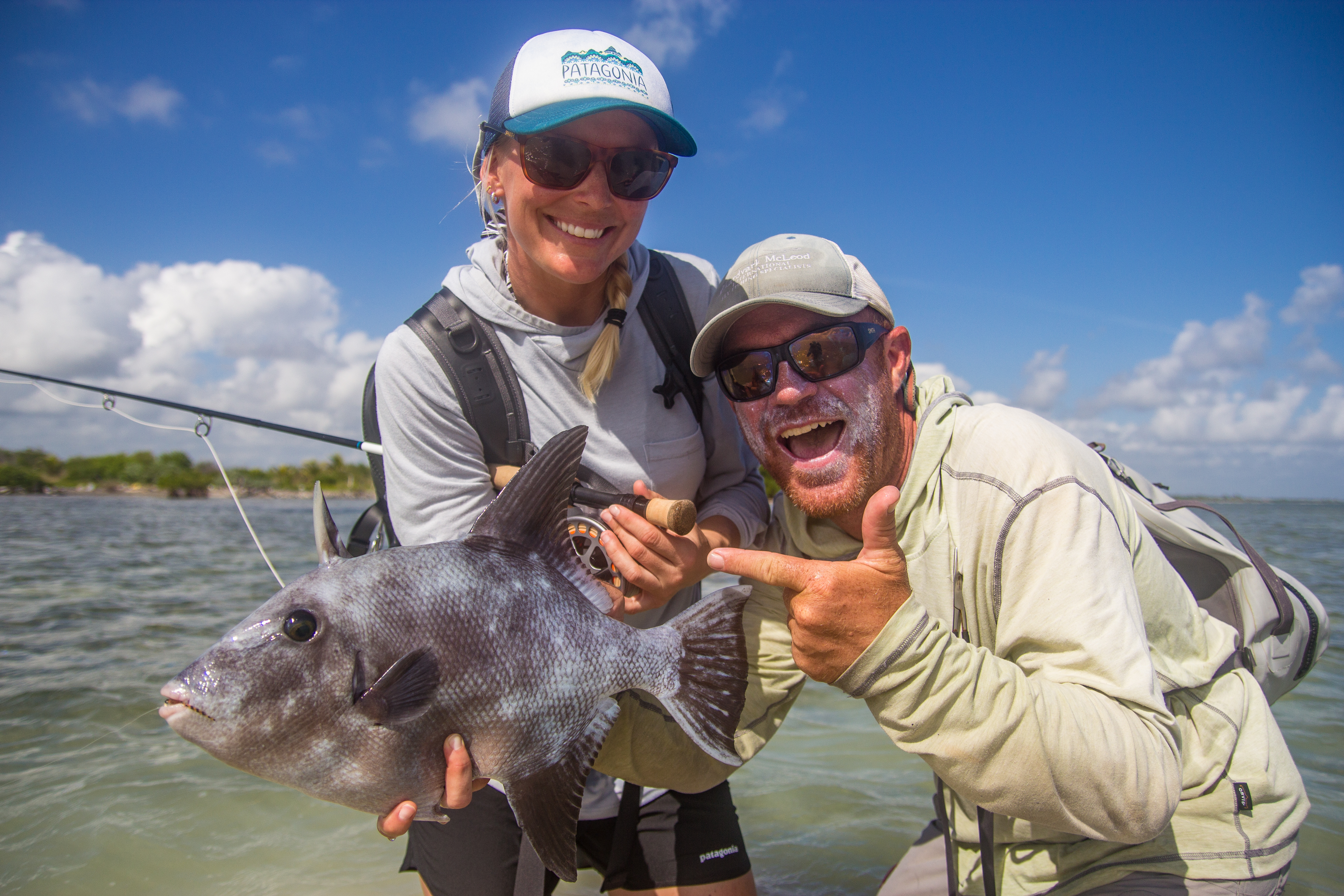 After a while Jess broke free of Nick and I’s tutelage completely. She was spotting her own triggers and casting and fishing beautifully. It was a fantastic day. 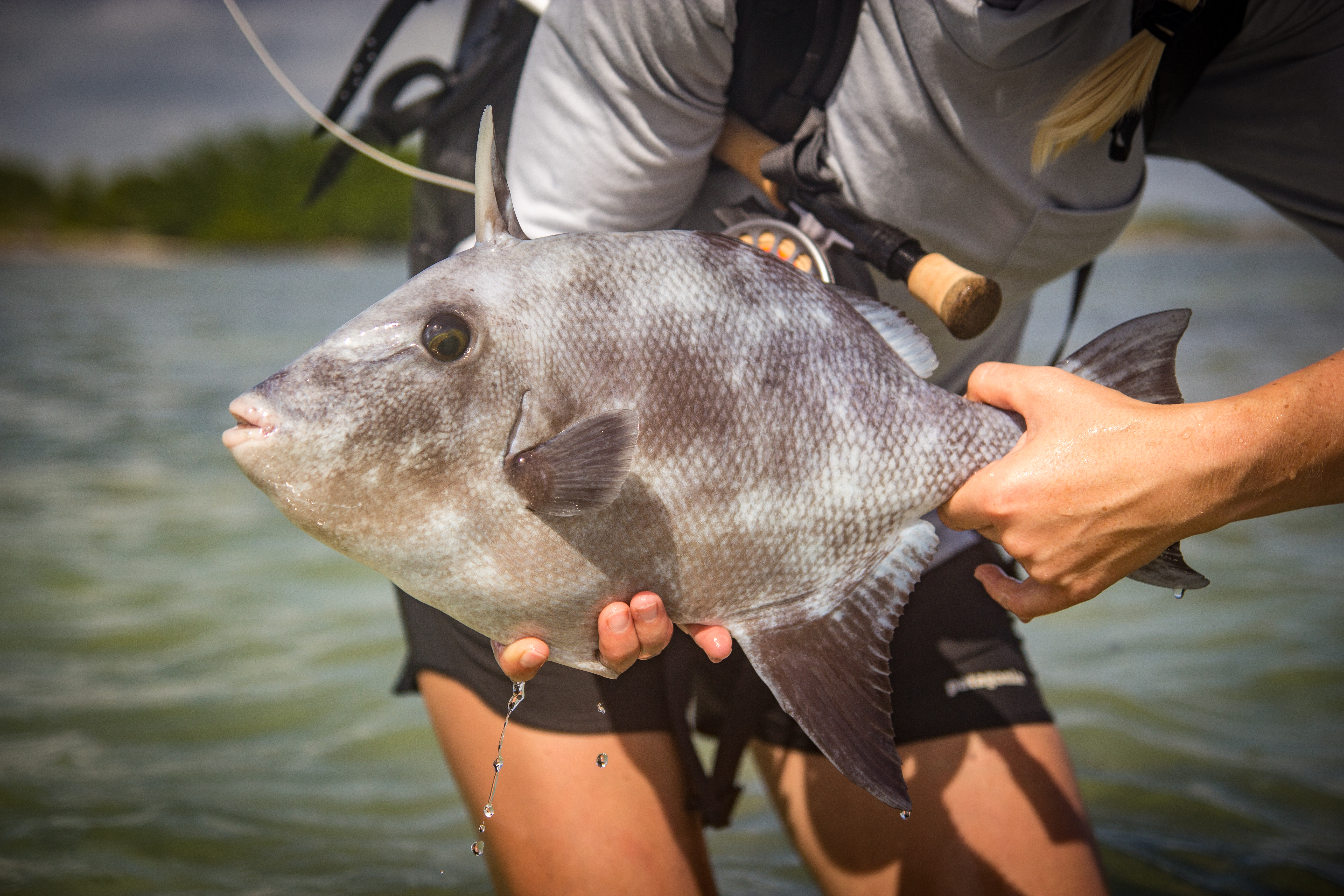 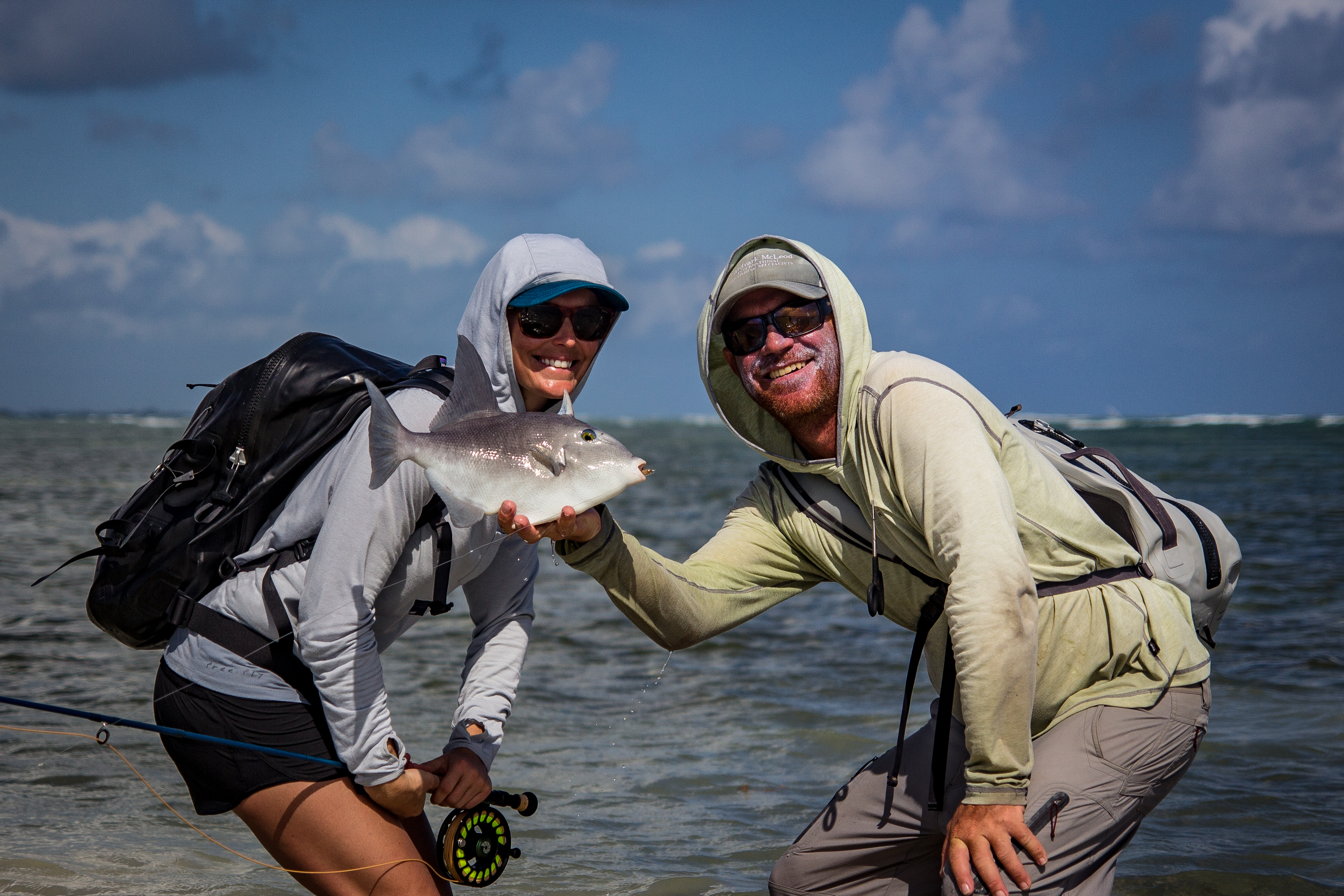 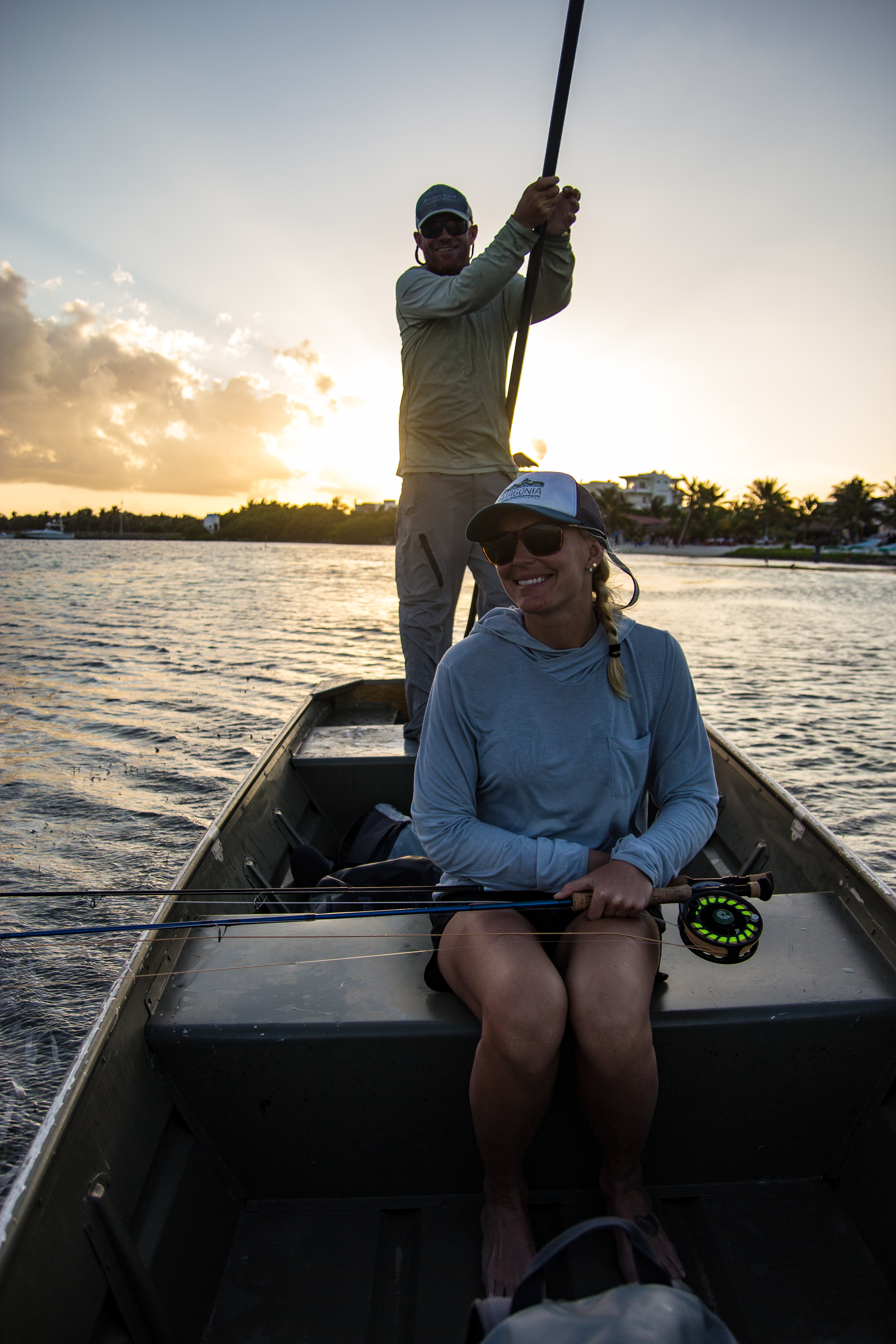 We ended our day with Nick back at the village polling around a flat with beers in pursuit of a couple bonefish and permit. I casted at a few bones tailing on the horizon but the sun was low and you couldn’t see which was they were moving. It was a great end to the day. That night Nick took us to a great seafood restaurant where we had fresh ceviche and margaritas. 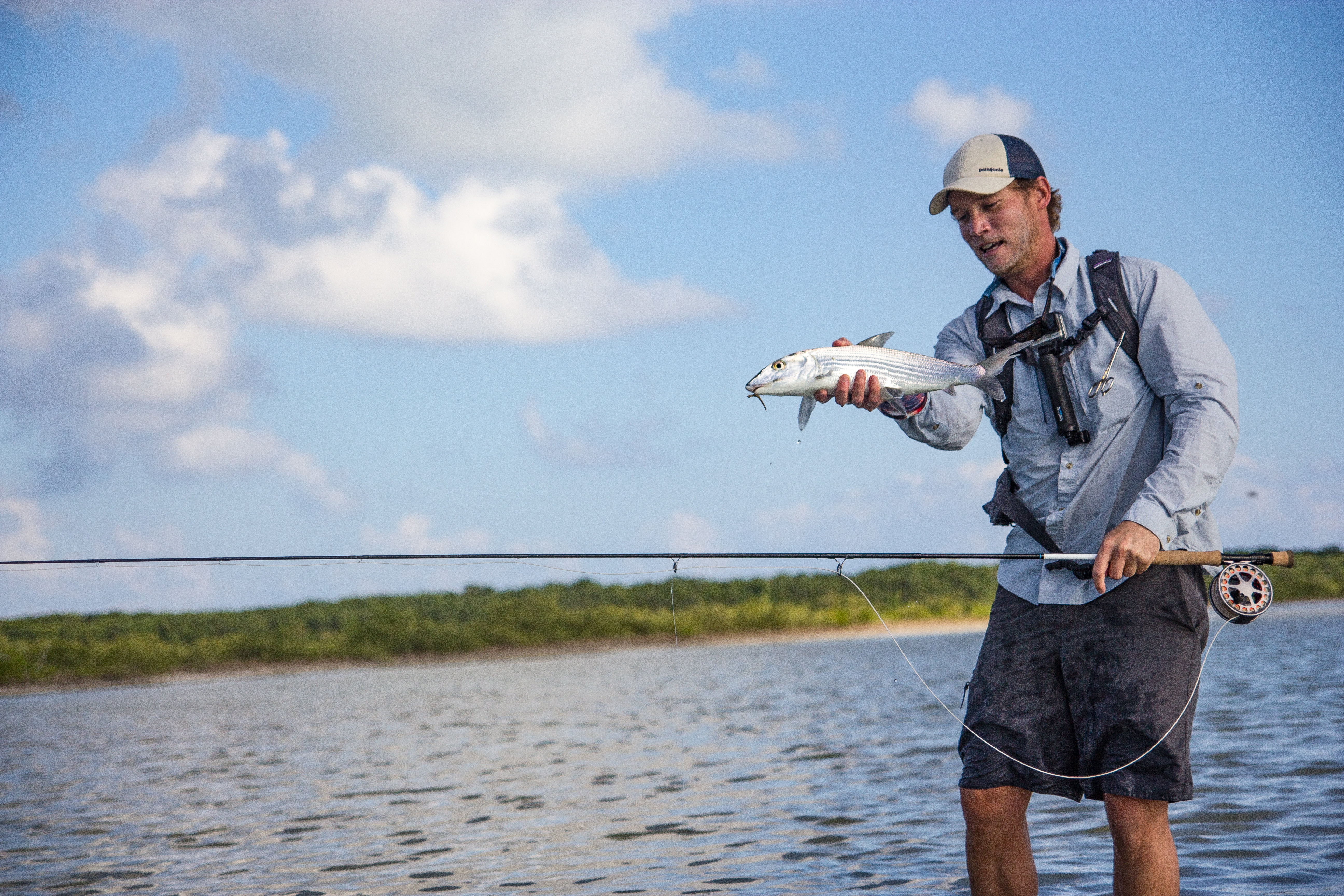 During the following days we explored a bonefish flat in a small village about an hour South. It was quite the maze of muddy mangroves and bugs and swamp but when we finally got to the flat, it was full of bonefish. Jess and I were ready for the day ahead with our backpacks packed as we walked and walked. We finally got to an area that I will remember for the rest of my life. We pulled out the GPS and if you looked close enough, you could see why we were geographically located in just the right spot for the pushing tide. These bonefish had to come this direction. Jess and I started seeing nervous water to our right and left. We were in water so shallow, you could see dorsal fins everywhere. As I looked into the distance, I could see literally hundreds of bones swimming this way and that way. It was in the top three days of bone fishing of my life. Jess unfortunately broke off three big ones in a row and was demoralized. So I had a crack and caught a bunch of respectable bones.