Yellowtail on the flats

I just had the number one most incredible fly fishing experience of my life with Tony Entwistle and Bob Bourdon. We were planning on going trout fishing for a few days until I offered the idea to try to chase King Fish or (yellowtail) on the flats. An absurd idea it was that caught on quick as moments later we were packing up the trailer, making mental lists, doing gear checks, and laughing at the state of our trout gear and its obvious unsuitability for these behemoth beasts that have been known to break rods with their gut busting runs and head shakes. 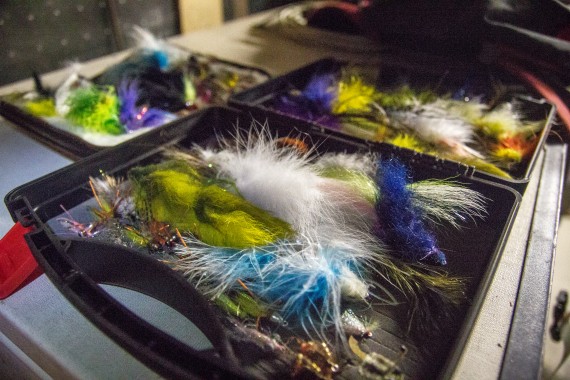 So many flies, so little time. 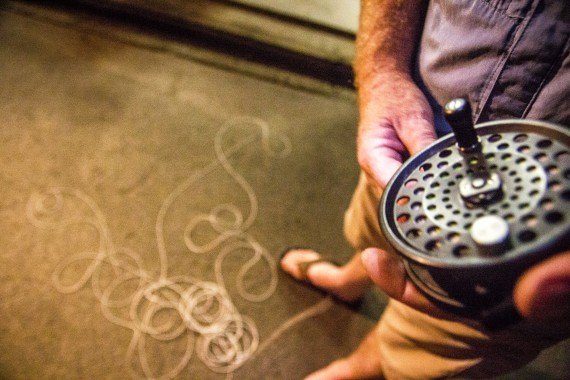 Should we bring the 3 weight?

We were so excited while packing we were running around making different piles of gear here and there. We even had a casting competition in the driveway. We pulled out old reels from Tony’s retired collection, dusted them off and said yup that’ll do. We were completely out gunned but were up for the task at hand. After all, we were in New Zealand, trout capitol of the world and I was about to go saltwater flats fishing with the professor.

When we woke the next morning almost everything was packed except for a few last minute items. I can assure you there wasn’t a snowball’s chance in hell I was about to forget any of my survival gear this time even though we were heading for the beach and 80 degree weather. I made sure I had my survival blanket and fire starting tools because after all, piss poor planning leads to piss poor performance. Life can be so funny at times. We then hit the road and headed for the nearest grocery store to pick up our rations for the four days ahead. We bought tons of meat and sausages and delicious veggies and I already had tons of rice and pasta and of course we bought beers and tons of wine and hand sanitizer and coffee and eggs and ham and bacon and tomatoes and chips. We were ready for the apocalypse or some damn thing and you should have seen Tony’s trailer. It was loaded to the brim with BBQ and jerry cans full of water and a custom toilet seat and all the necessary goodies for a few weeks out in the bush. 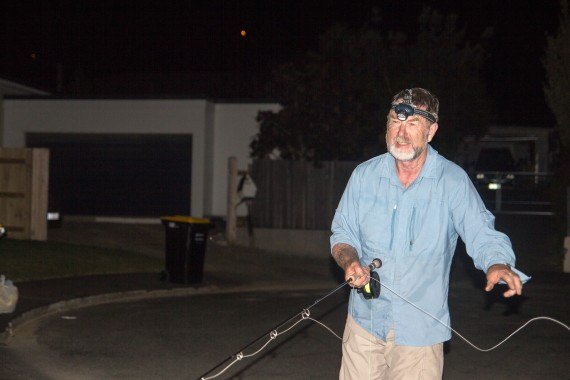 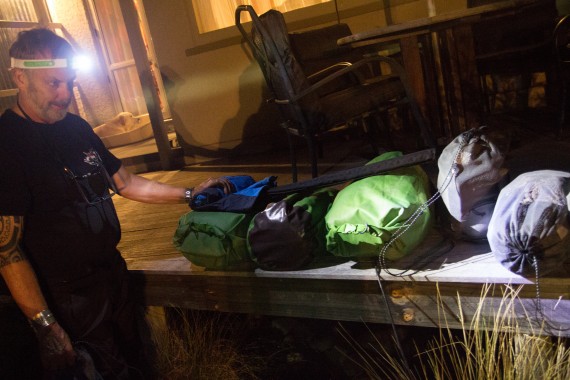 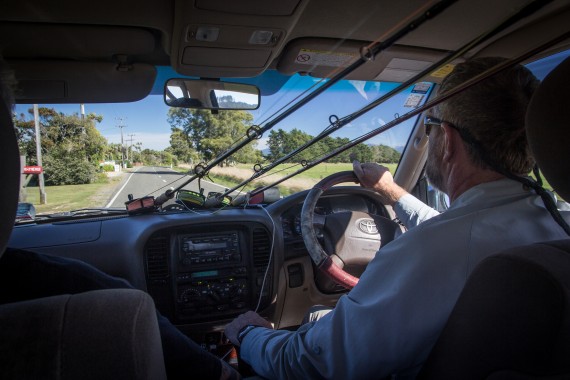 To the flats we go!

Upon arrival we set up camp and went for an evening fish. We didn’t know what to do or where to do it and soon we found ourselves walking towards the water. After a few hours blind fishing into the surf we realized this would not be as easy as we had thought. We talked about other options and speculated about the fishing and ultimately questioned ourselves until finally we walked the beach and     dug for clams. 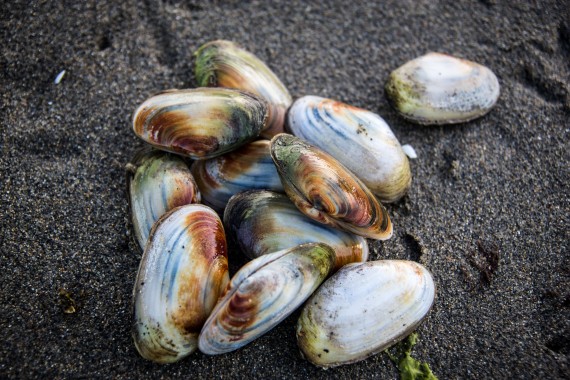 We were happy to head back to camp at that point and steam up our clams with a bottle of wine. We lit the BBQ and had burgers, potatoes, carrots and beans that night and had a few more bottles of wine. We went to bed dreaming of tailing Kingies and had no idea what would be in store for us…

A lot can change in the blink of an eye. I try to live by this idea and knowing how fortunate you are in this life is the most important thought you should carry with you. So when we rolled out of bed and had our coffee and eggs and suited up for the day ahead I had only positive thoughts. Afterall, we were going to church on those flats that day and I’m not a religious man. 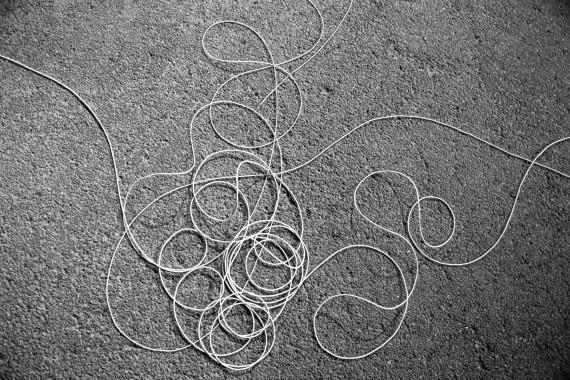 Sometimes you need to unwind 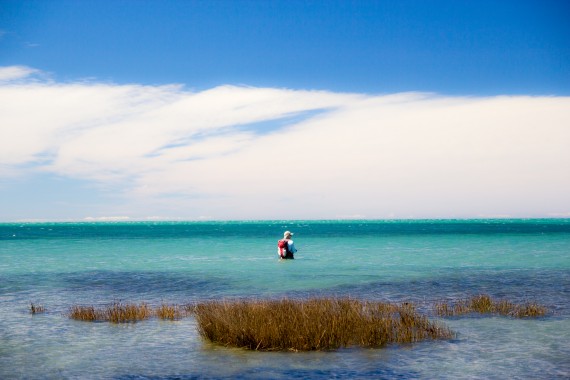 The flats of New Zealand

I split up from the other two pretty quickly and found my own path. After ten minutes I saw my first Kingfish. I couldn’t believe what was happening right in front of me but a big sting ray had entered the flats and a few Kingfish were following right behind picking up any leftovers. I laid out a perfect cast and a second later a Kingfish was charging my fly while I stripped. I was so tuned in at this moment and was able to give the fish a good strip strike instead of a trout set where you lift the rod to set the hook. It’s second nature to set the hook by lifting the rod and I have been known to do it in my sleep. Luckily I crossed his eyes with a good strip set and all hell broke loose. Tony saw the entire thing happen and was yelling from across the flat. Time stood still yet again but for good reason this time as I battled this unruly yellowtail. 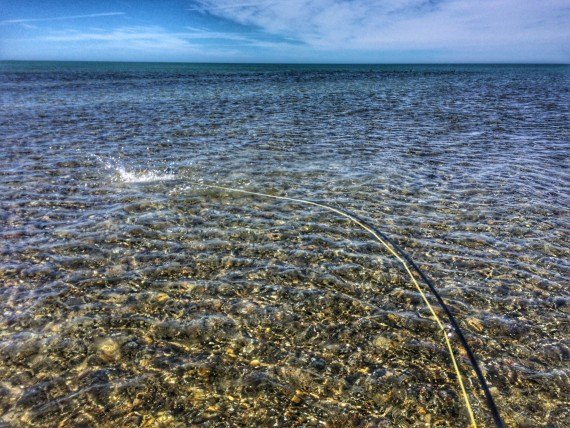 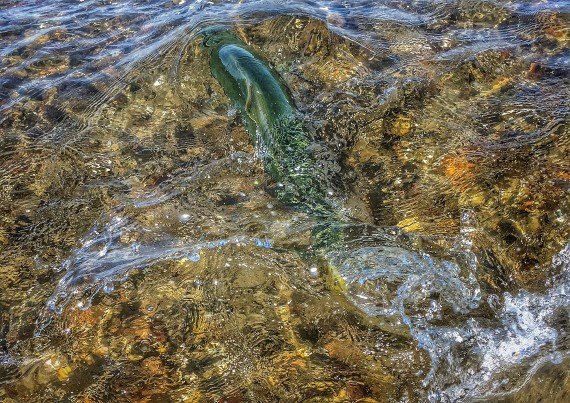 It was everything good in the world. It reminded me of a tailing bonefish in the Bahamas. It reminded me of a time when I showed up in the Caribbean after sailing across the Atlantic from North Africa. I had only my backpack and hammock and found a little Island full of bonefish. I set up my Hammock there for 17 days and found paradise. I’ll never forget seeing my first bonefish there and how vivid it was on the flat. This was truly an experience I will never forget. I thought of my life and what a cool thing life is and of course what does it all mean? Maybe I’m too much in my head while fishing and sometimes it makes me go crazy. Should I just shut up and fish? Then again fish have that effect on me and I am who I am and that’s all I can be. Walt Whitman told us to “Resist much. Obey little,” so I’m going to keep doing exactly what I do, question everything, and live life just how I want to. 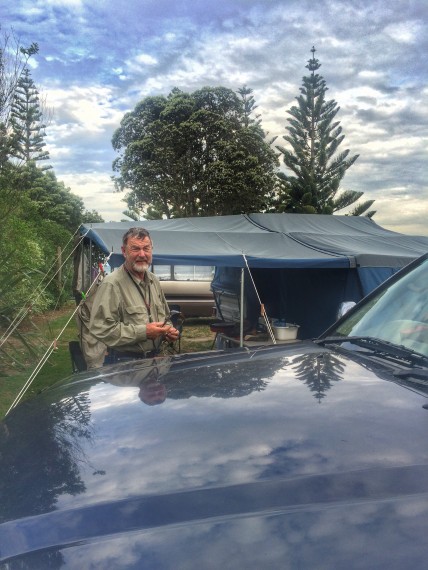 The next day as we waded the flats we came upon another fly fisherman. We wondered what the hell he was doing on our flat and we wanted to go talk to him but he kept walking away from us and wouldn’t look at us so we walked right up to him and realized he was an old friend. Tony had known this guy Sylvio for quite some time and they were guiding buddies from long ago. For the rest of the fishing trip Sylvio camped, cooked, fished and drank with us. It was so cool to meet a new fishing friend on a flat in the middle of nowhere. 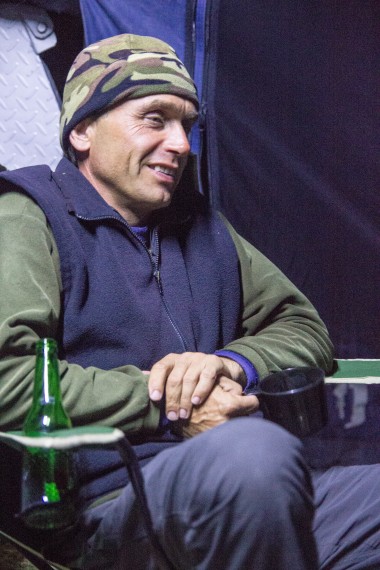 The most memorable moment of the entire 5 days was the one day when the weather was terrible. We had driven down the road to a new area in hopes of catching a few bigger Kingfish. The tide came in and we were hoping the fish would follow. Well that never happened and we damn near wrote the day off as it was raining now. On our way back to camp we stopped in a sneaky little pull off and glassed the flat while we ate lunch. Only a moment later we noticed nervous water ten feet off the beach. We squinted looking at it hoping it was a school of kingfish. As we looked harder these nervous patches of water became more frequent and we realized we were looking at schools of Kingfish riding on the backs of multiple rays just yards off shore.

We snuck out of the truck grabbed our rods put down our lunch beers and snuck up to the beach. I laid down my first cast and it looked like a grenade had gone off as multiple Kingfish swarmed my fly. The only problem is they weren’t eating it! I continued to cast and cast and finally had the idea to just dead drift my clouser so it acted like a crab bouncing off of the sting ray’s back. Moments later I came tight as a fish grabbed my fly and took off for deeper water. As this was happening Tony also hooked up into his first fish. We laughed as the fish bent our trout rods like toothpicks. 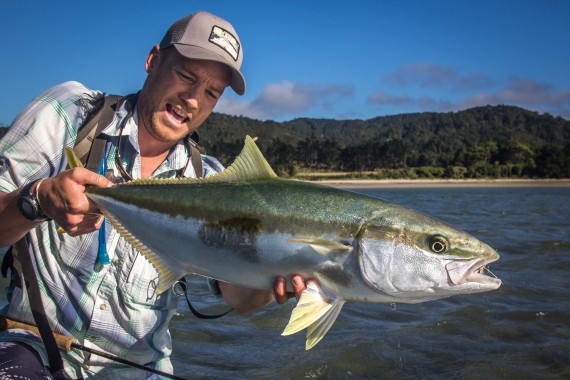 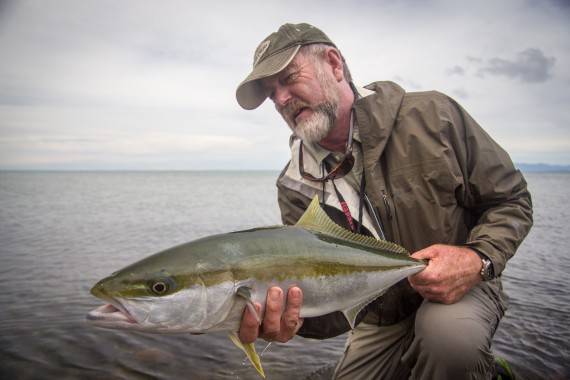 Kingfish on the fly 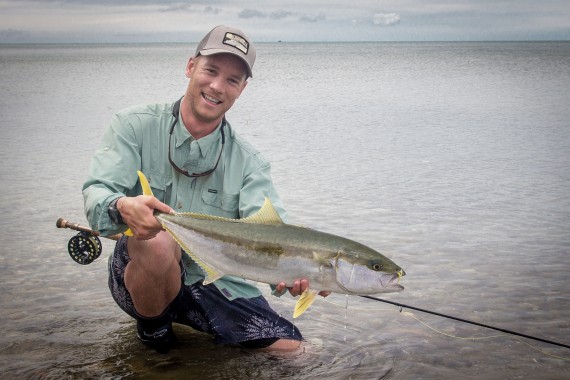 As Tony and I were landing our fish Bob also had hooked and landed his first fish. It was a maddening session and there was nothing left to do but laugh and drink a few dark beers. We left for camp and I cooked a feast that night of garlic mashed potatoes, salad and sausages. 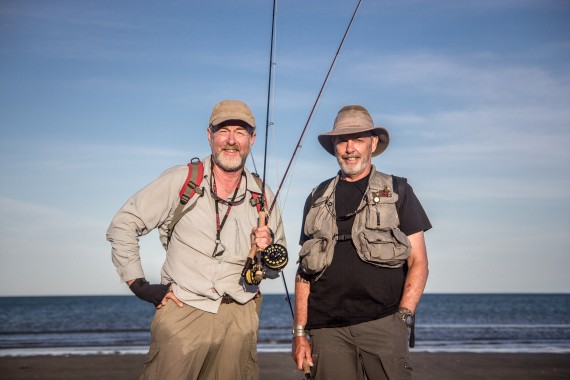 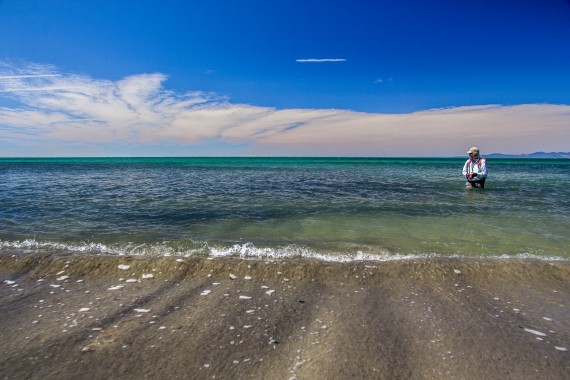 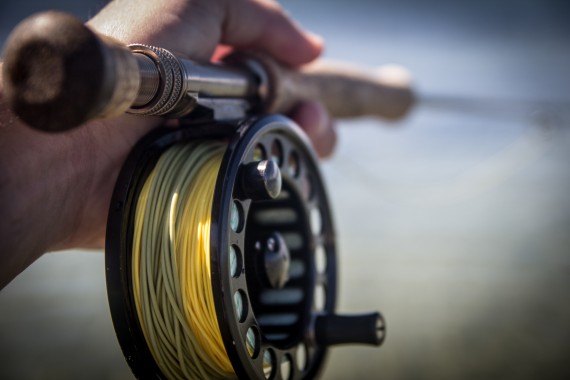 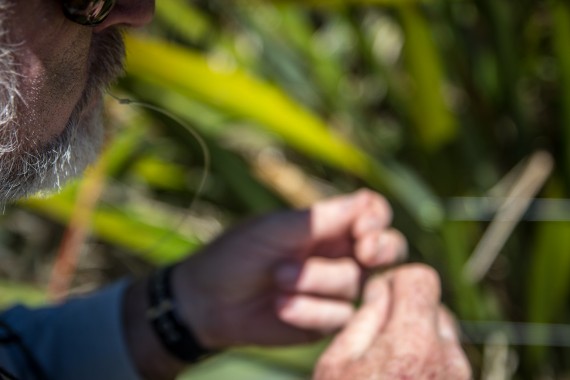 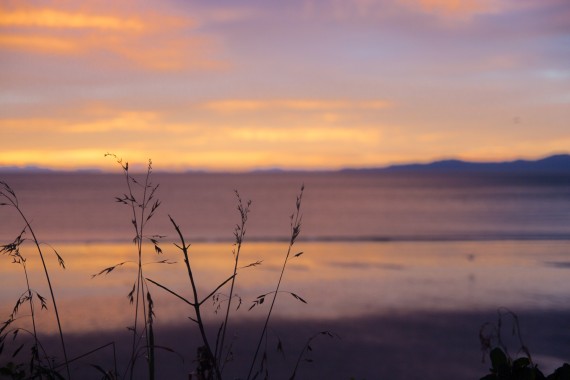 It was bittersweet packing up camp after such a fun trip, it always is. I learned a few invaluable lessons though, keep searching. Don’t accept things the way they are. Look again at things you take for granted. Don’t be intimidated by anybody or anything. Put a bend in your rod. Cast true and don’t land your fly too hard. Strip set. Be like a fish.