Day 9 – The pinnacle of the sport

Today was the day that I would officially melt into the Red Sea. This was our second day without wind and I had a panic attack nearly every half hour. There was no escaping it. A sip of water here in Sudan is a liter and a half. I literally couldn’t keep liquid inside of me and was sweating so profously it became sort of funny. We found it to be maybe five degrees cooler in the water so during the down times we just leisurely bobbed around and waited for things to happen. I fished with Wade and Michigan Mike today and we were lucky to have Fede with us. The plan today was to ride out to a crazy pinnacle that had an old radio tower on top of it and Fede was going to climb it and get an incredible birds eye view of the entire flat. We were to line up and Fede was going to call out oncoming GT’s. 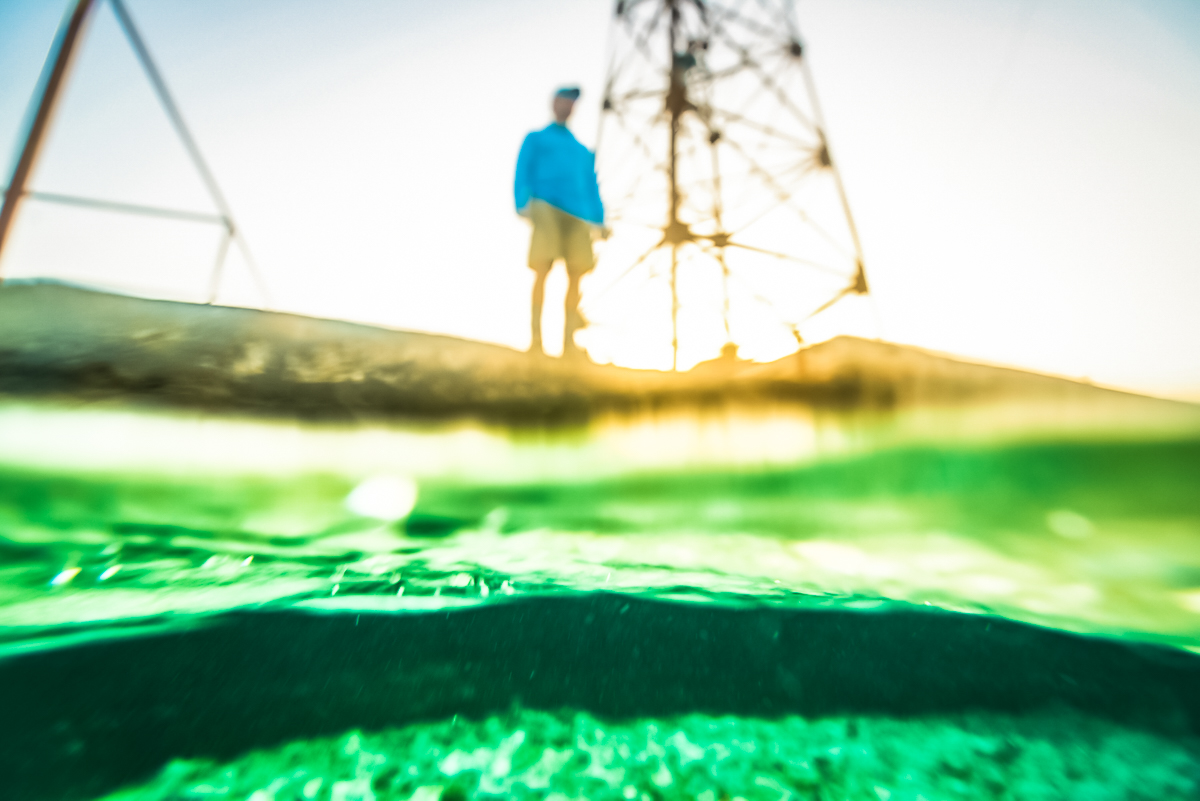 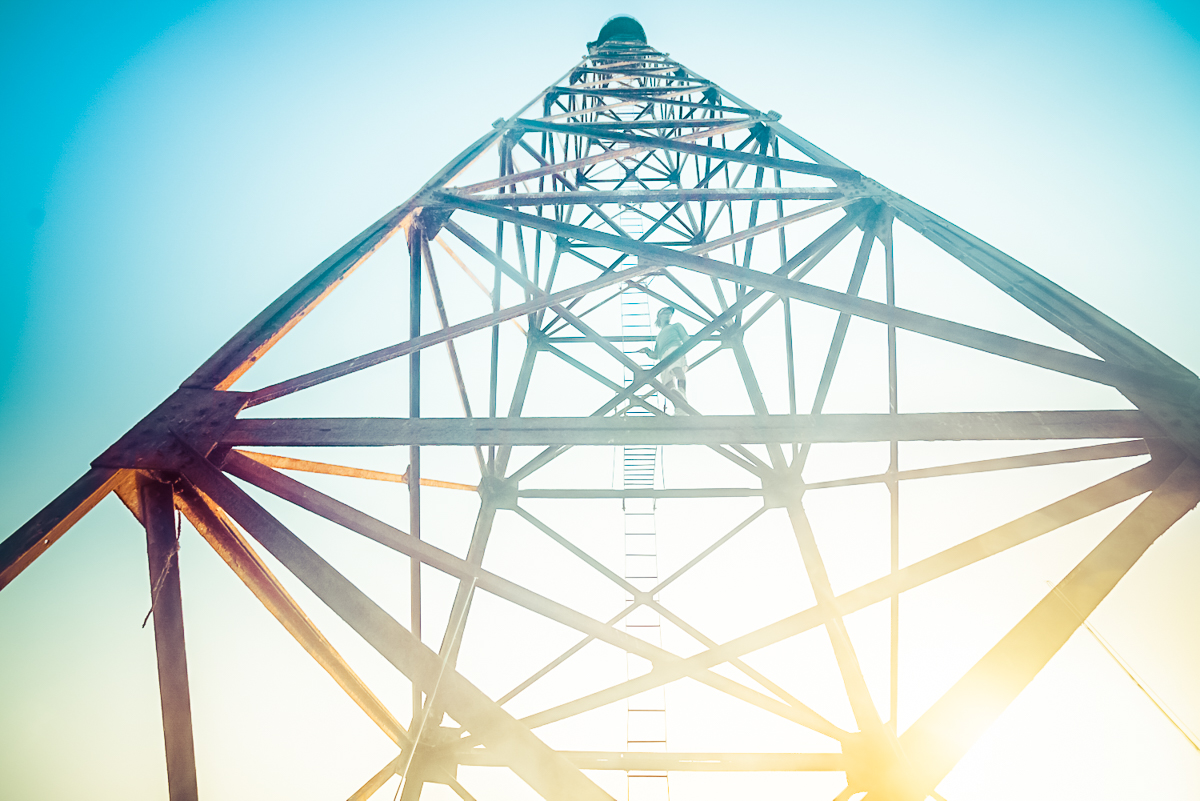 We waited and waited and waited some more. There was no wind at all and the GT’s should have been easy to see. The problem was they were not active due to no wind. So I let the other boys stand around and wait while I had fun mucking around with various flats species living in and around the coral. I caught this amazing emperor snapper, and the incredible picasso triggerfish to name a few. 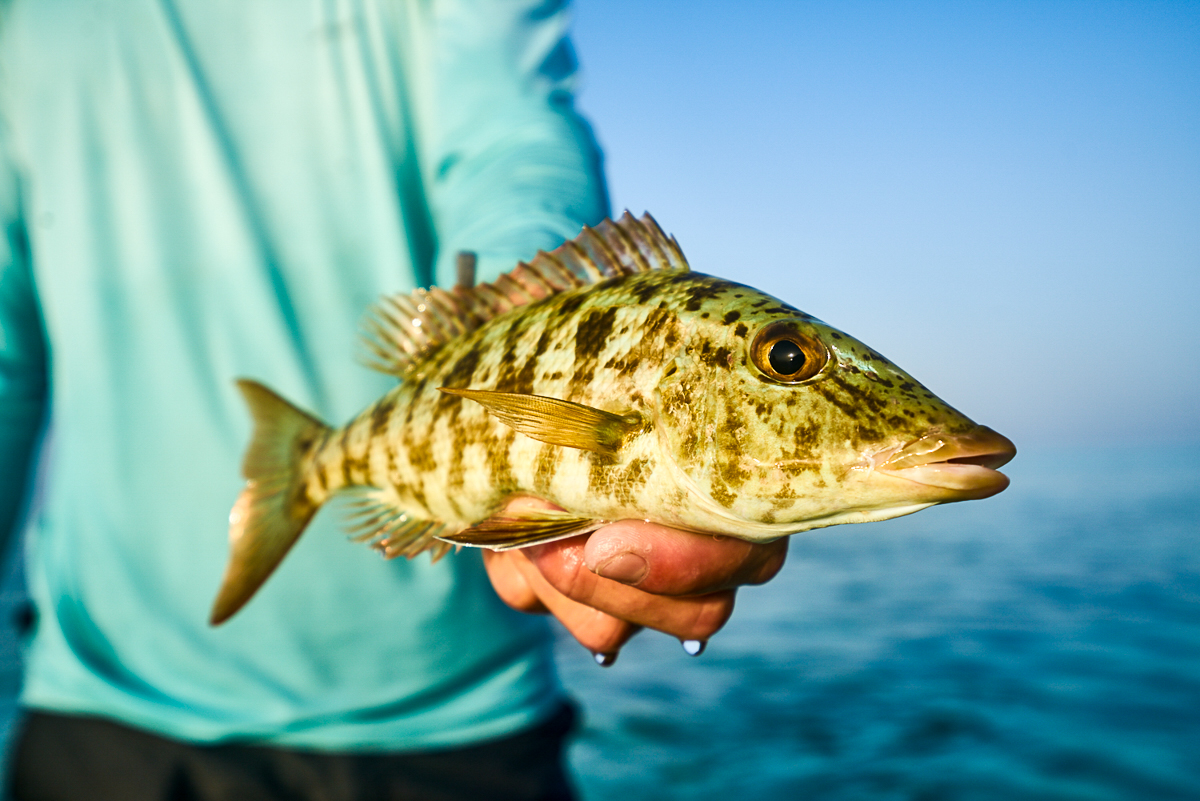 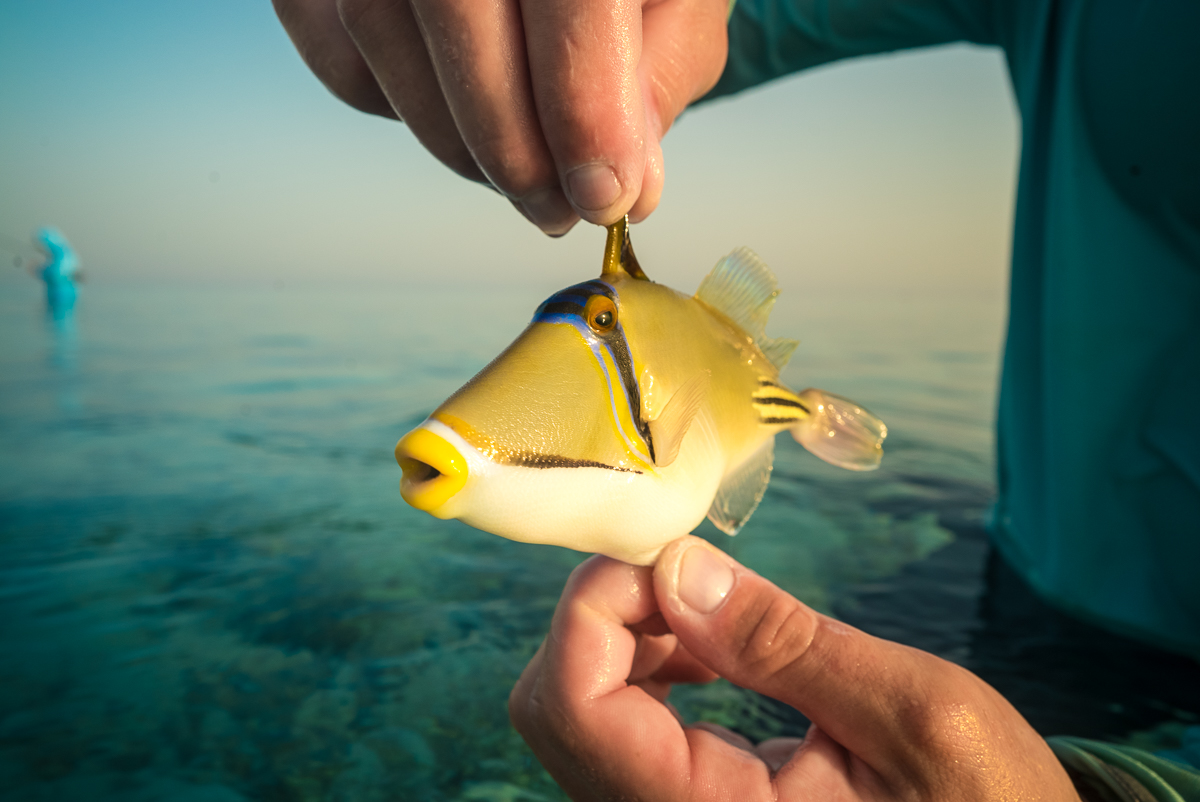 We did have a hectic moment while on this pinnacle island. Boredom was starting to set in while we were waiting for the GT blitz. I was sitting down with wade talking about marathons, life on mars, fly fishing, and gluten free pizza, when all of a sudden Fede yelled, “There they are!” I saw him about three stories up pointing out at the edge of the reef. I grabbed my 12 weight and jumped off of the concrete steps and starting running/floating/wading out to where the GT’s were. I had not seen them yet but knew about where they were. I kept looking back to Fede as he was yelling directions at me. I pulled off line and cranked down my drag and was ready for anything. I was looking left and right trying desperately to see them before they saw me. My eyes kept wandering until finally I realized I was looking to far. In a flash I saw two GT’s 20 feet in front of me and a bit to the left. I false casted a few times and landed the fly perfectly in front of the biggest GT. I expected both of them two blitz me and inhale my fly but the exact opposite thing happened. They both spooked and with a swift kick of their tales they were off and headed for deeper water. It was insane. These fish were both probably sixty pounds and if I hooked one I doubt I would have landed it. We motored back to the boat for lunch.

Upon arrival we heard stories from the other team and their incredible morning. Apparenty they had insane GT action similar to ours from the day before. Except they had a run in with a 10 foot oceanic white tip shark that followed their GT onto the flat and almost ate Russ. They had shredded fly lines and wet camera gear and broked this and that it sounded like madness. After their insane morning I was having a serious case of FOMO (fear of missing out) so I opted out of lunch and instead jumped into the boat with the other team and motored over to one of the most beautiful flats I have ever walked. 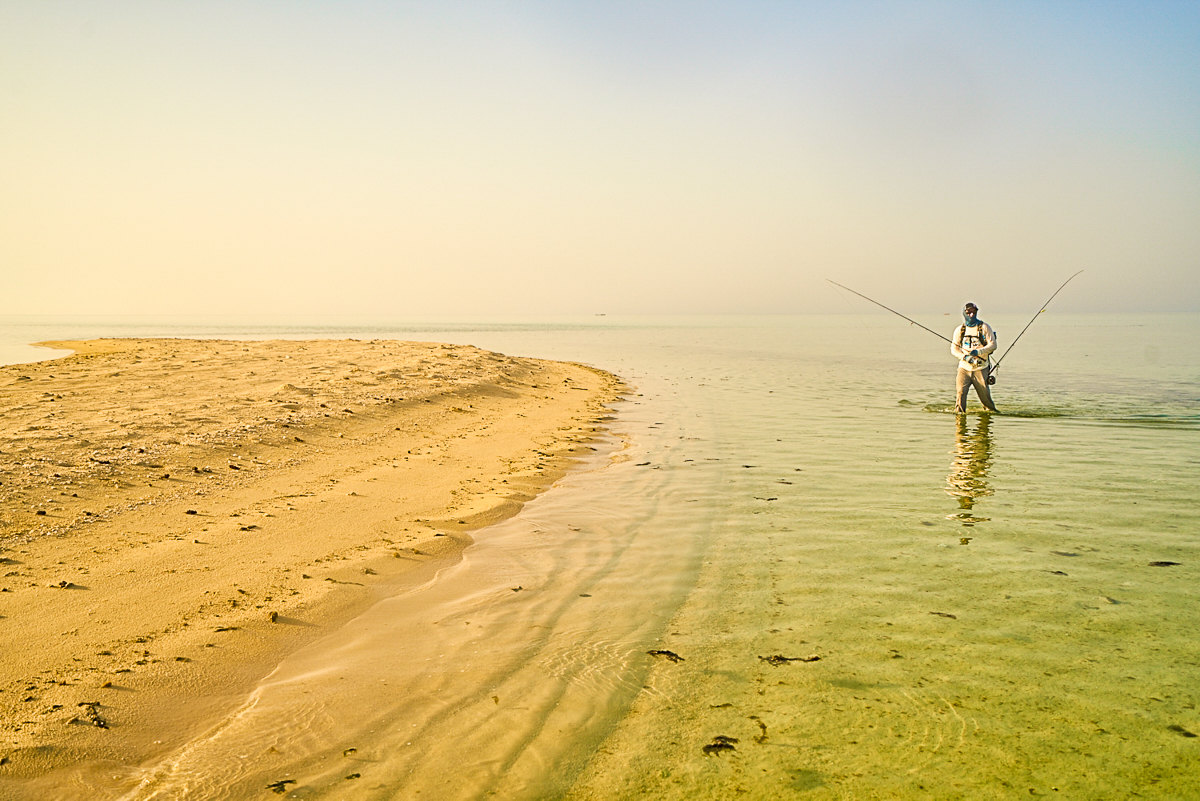 We walked this flat for four hours. It felt like outerspace and I could have dissappeared from society for the rest of my life. At one monent I was looking at tailing triggerfish to my left and in the next, schools of milkfish to my right. Their were tailing bonefish on the horizon and don’t forget to look behind you for schools of GT’s. I was humming the same song over and over in my head and thought about everything and nothing at the same time. You can look at it either way, is my cup half full or half empty? Is this a race meant to be run with speed or should it be more slow and steady? Afterall, there is only one finish line? I started giving my self a headache with these thoughts and realized there is no point but to have fun. As the flat came to an end the group congregated on the small sand island. We were all standing around shooting the breeze when I looked to my right and saw a neat little seam unfolding from the opposing currents of the receding tide. While everyone started talking I began fishing it like you would a river. Cast after cast I was catching these beautiful little bluefin trevally, peacock groupers, emperor snapper, and lots of other species that were falling for my crab pattern. This sparked a fishing frenzy and now all six of us were lined up and having a blast blind fishing this current. We were hooking up left and right and it happened to put everything in perspective. Stu managed to hook a sting ray and fought it for thirty minutes while we were uncotrollably laughing. I think the heat was making us go a little bit crazy… 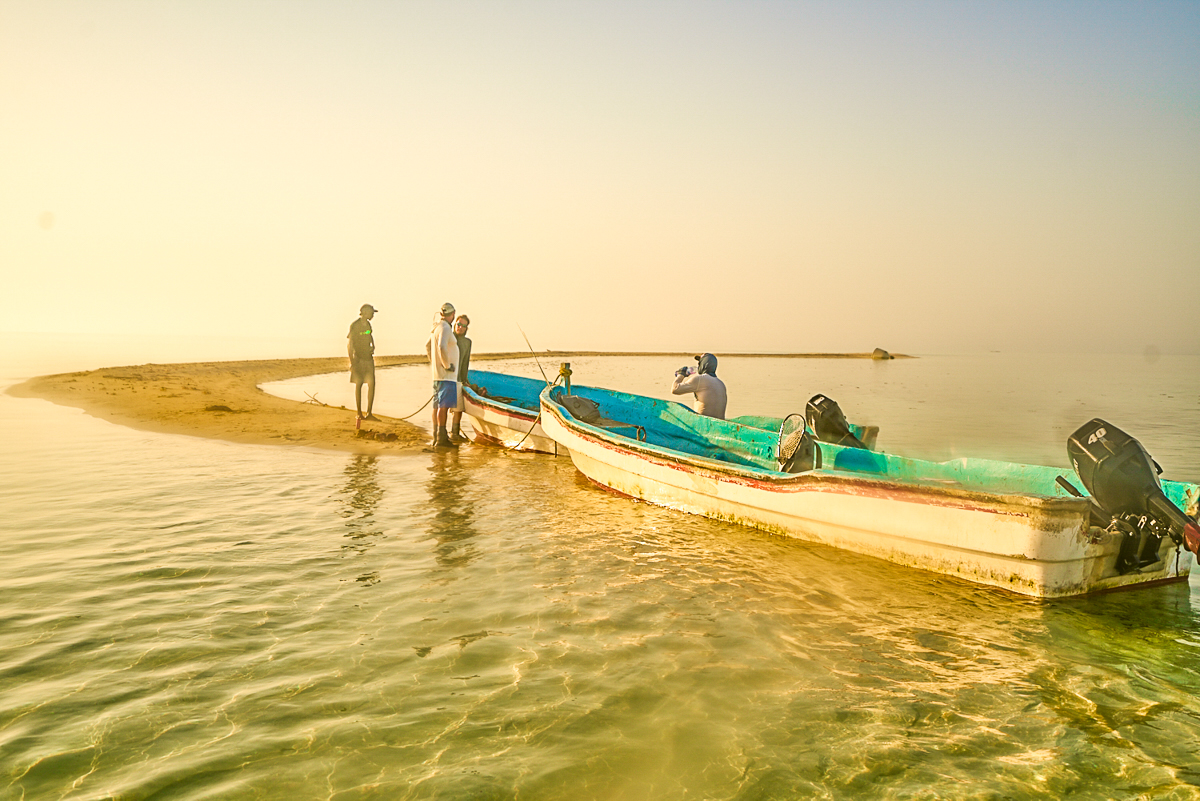 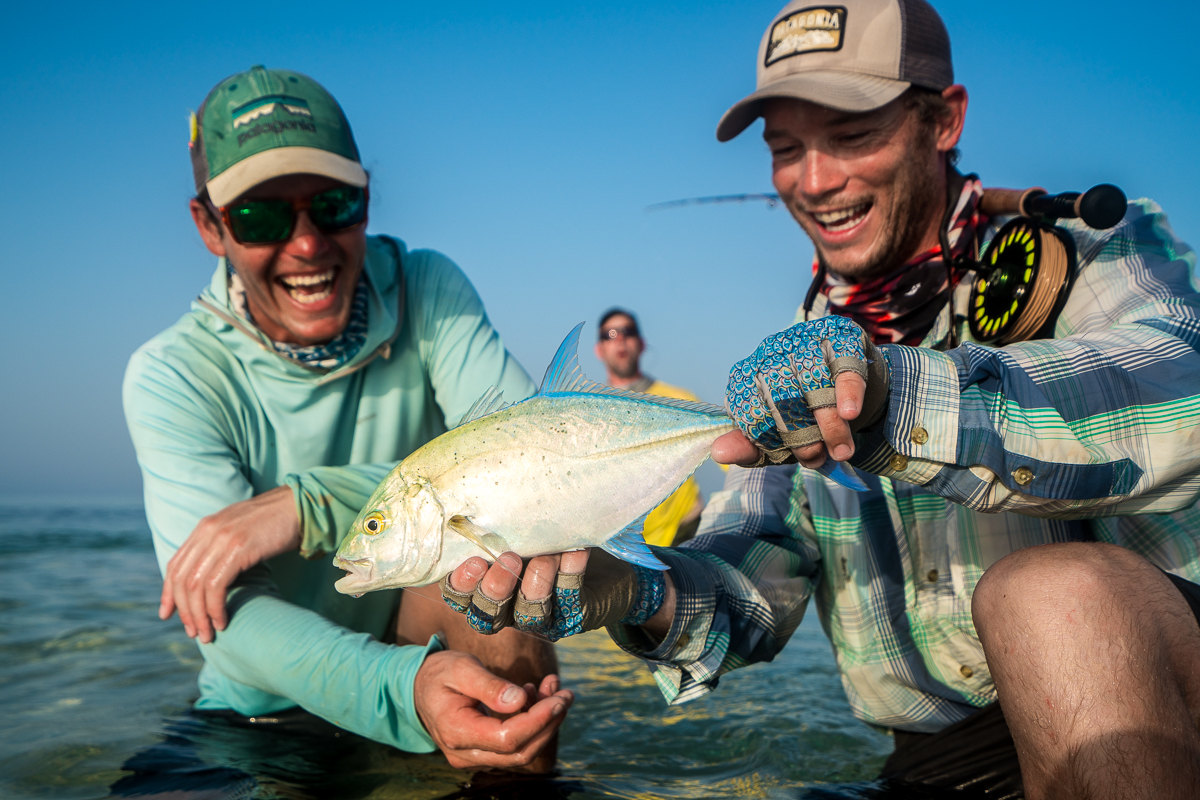 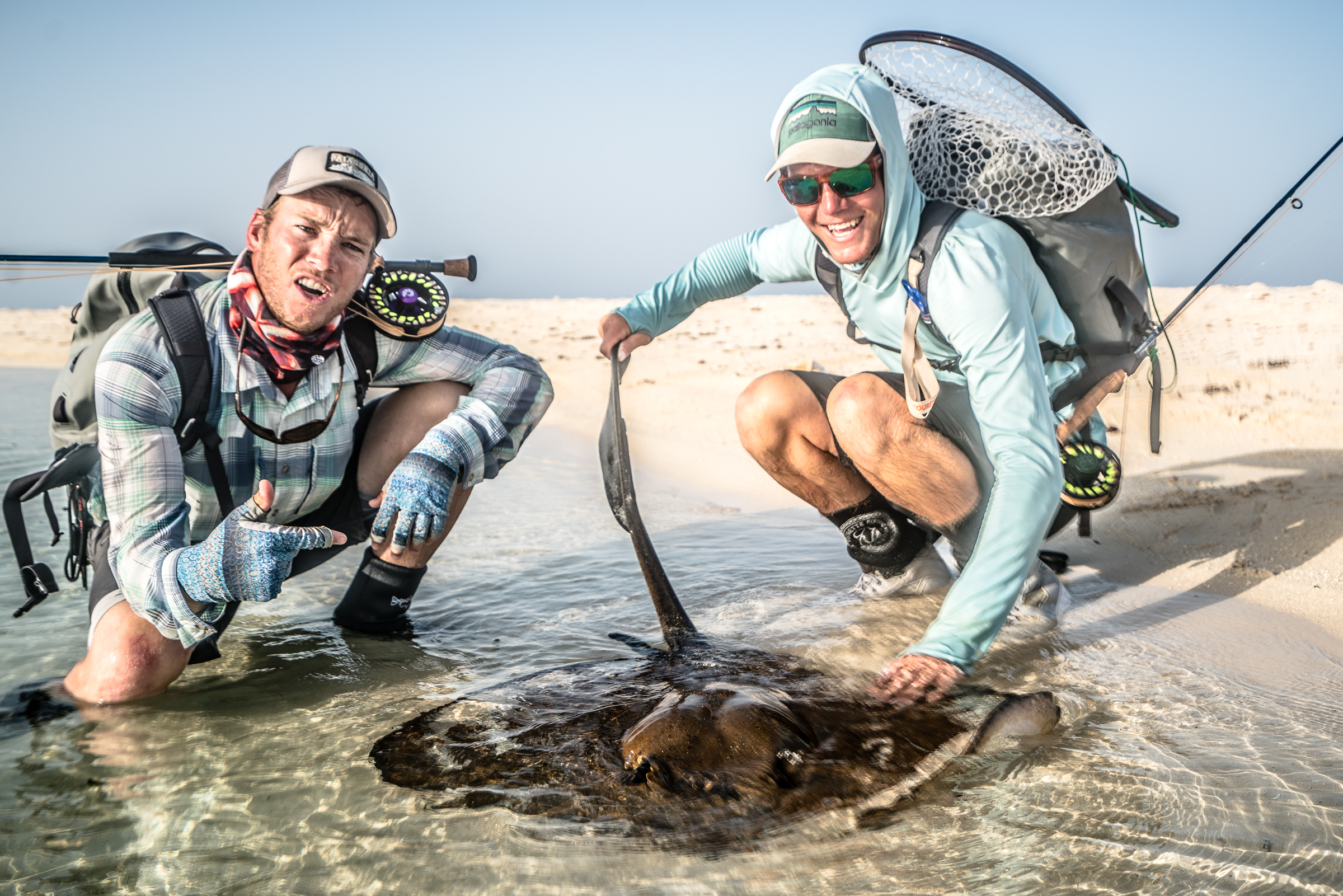 On the way back to the boat we trolled for an hour and had great success. I caught an unbelievable bluefin trevally and the other boys hooked up as well. It was a hilarious evening and was not taken seriously at all. We finally made it back to the boat and enjoyed fresh bluefin ceviche with diced onions and fresh lime juice. 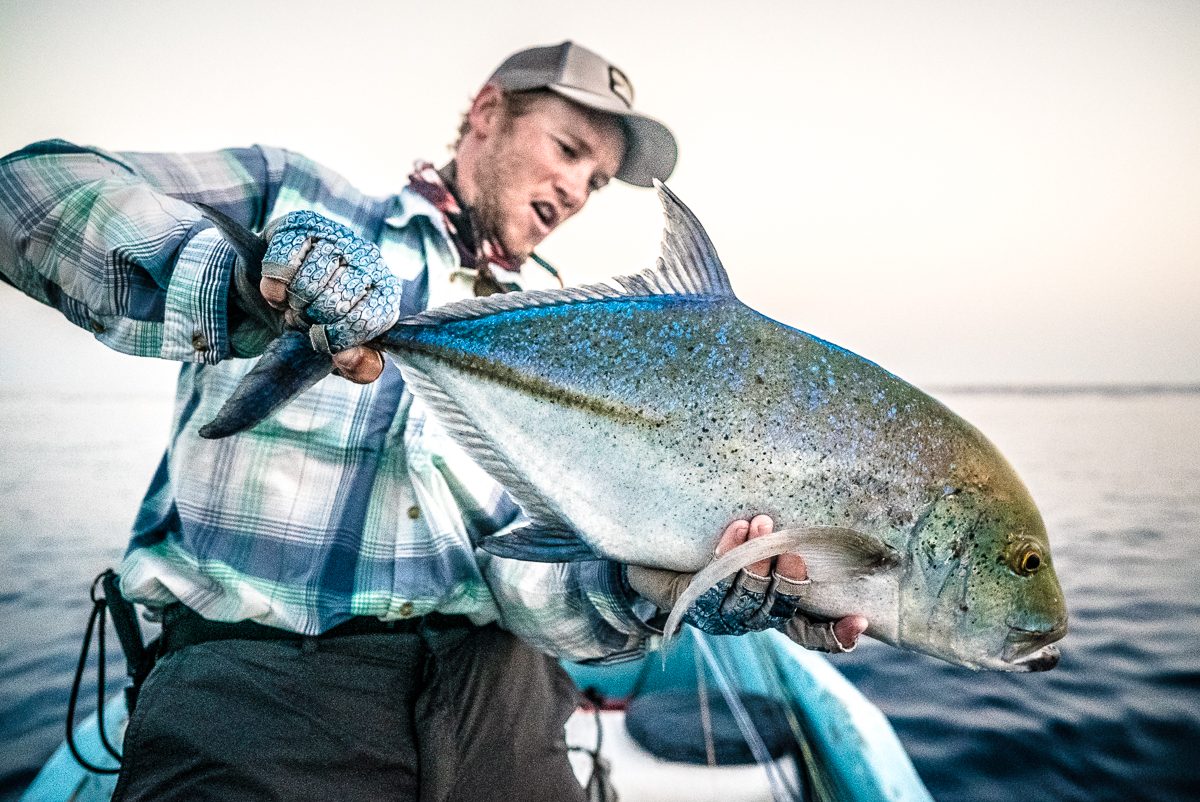