For those just tuning in I’m in Panama after nearly flipping the van on a steep hillside and jackknifing the trailer. We thought we were doomed when all of the sudden a few locals drove up and pulled us up the rest of the hill and the three hills after. When the wheels hit pavement we were good to go and heading to a lake that I was told had huge numbers of Peacock Bass living in it. When we arrived at the lake we were so relieved we decided to just sit for a minute and crack a Panama lager. I pulled out my gear and started rigging up my 8 weight with a floating line and a fluorocarbon leader with twenty pound test. Desi and Bear were intrigued by the bar and the loud reggaeton (my favorite) music so went in for a closer look. Jeff and I walked down to the edge of the lake and started casting. I couldn’t believe it when only 5 casts later I had my first peacock bass to hand! 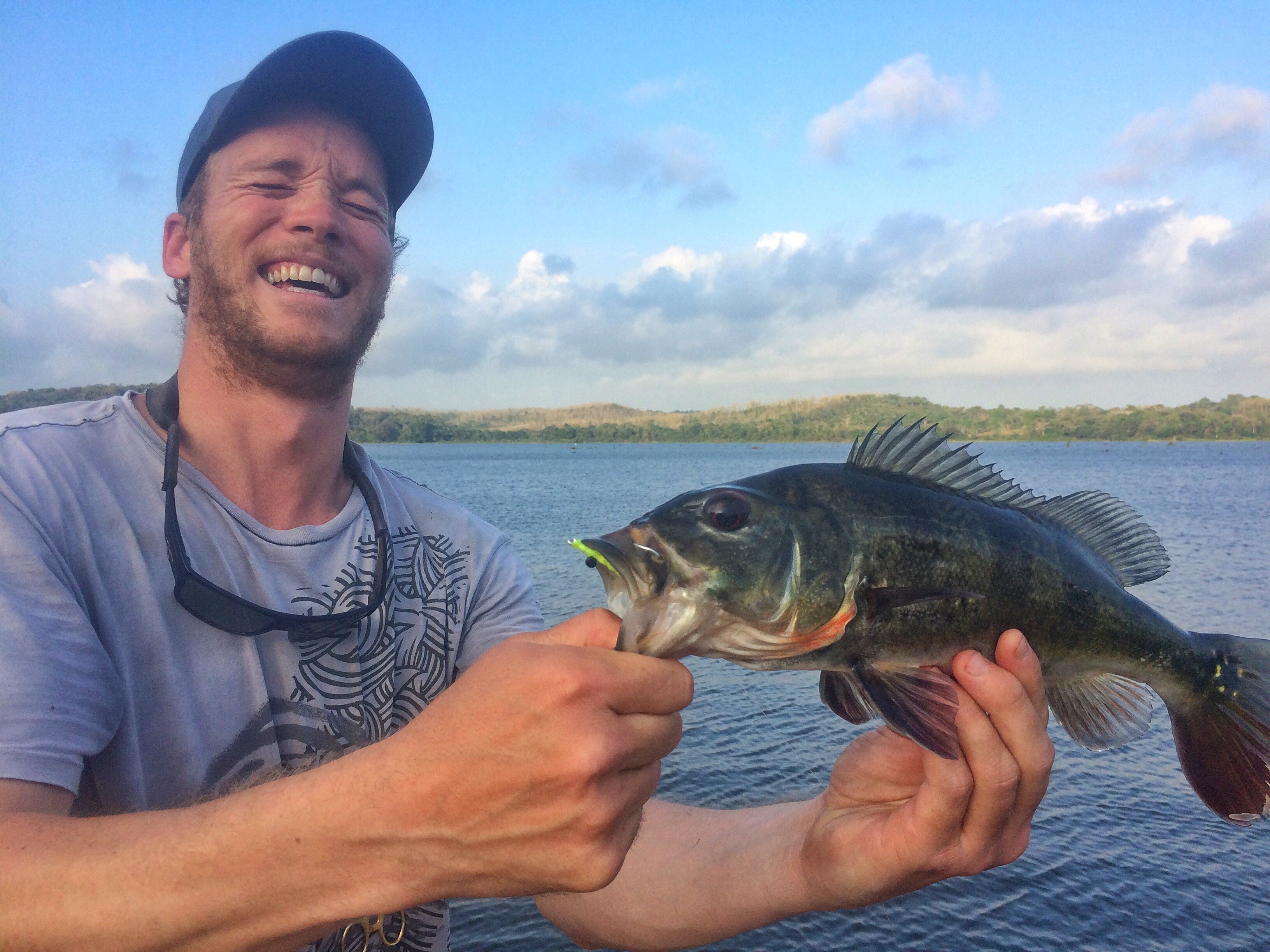 Moments later Jeff hooked up and caught his first one as well. The other boys had great news upon arrival from the bar and said that they had met “the fisherman.” They said they met a guy who knows this lake and wants to take us fishing and has land up the road that we can camp on and his family will cook us dinner tonight. The plan sounded insane and I thought it may be too good to be true so we wandered back up to the bar to meet the local fisherman with a boat called Ariel, who says that his life and love is fishing. That sounded all too familiar to me so we ordered a round of beers and started talking. It turns out Ariel is a very knowledgable fisherman and grew up in these parts and had photos of his big fish on his phone and I had photos of mine and in no time we were speaking the same language. We kept ordering well actually the bartender liked us so she just kept bringing beers to the table and it was a Friday night and the locals were coming out now so the hell with it, we partied on. 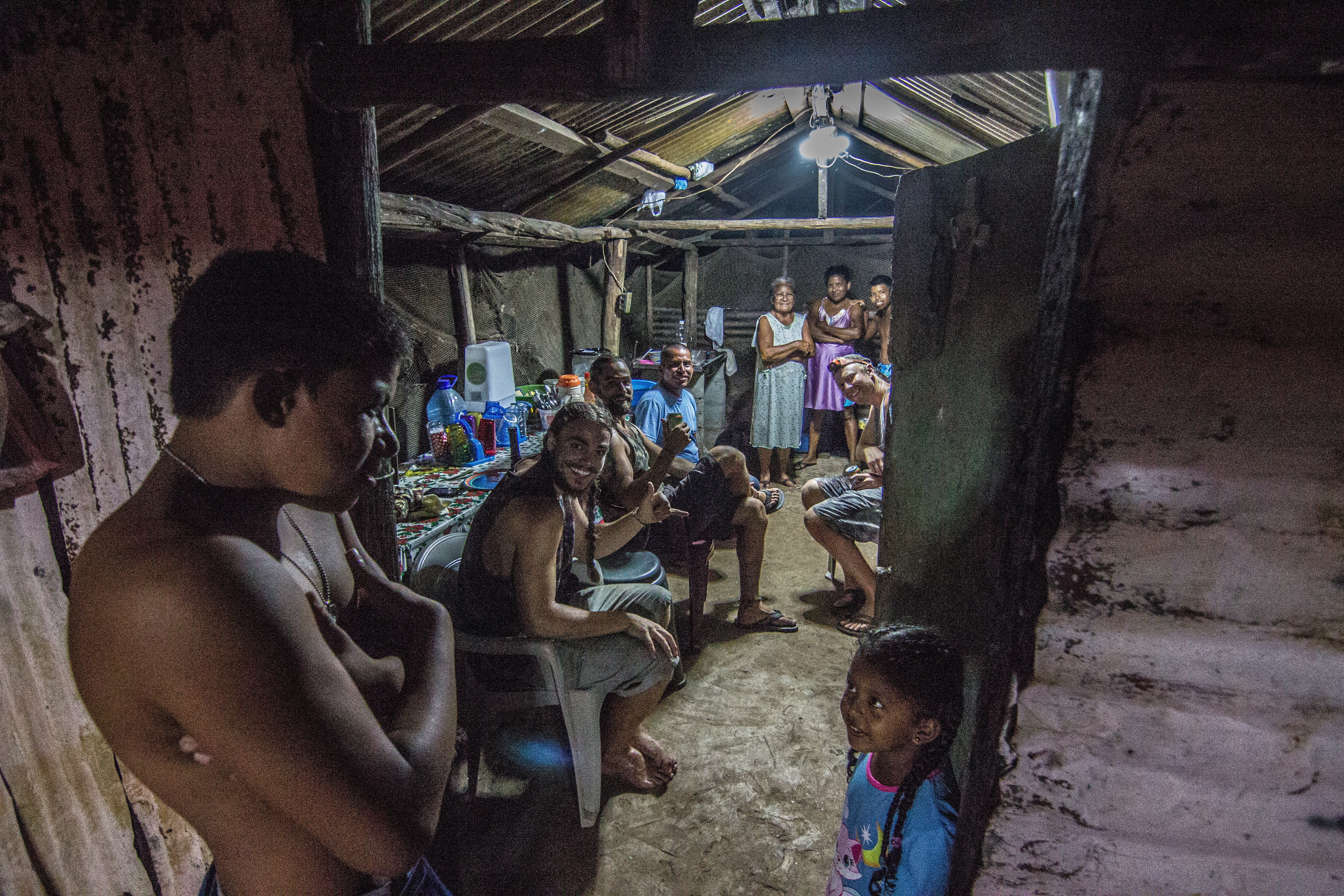 So lucky to stay with this amazing family in Panama for a few days.

We all jumped in the van and headed back to Ariel’s house where his entire family lived. When we arrived there was about 20 dogs that greeted us first, followed by Ariel’s family. They welcomed us into their home and cooked us fried eggs and plantains that night. We all sat around in their kitchen and tried to converse the best we could but sometimes just sitting together is enough. They understood us and I understood them and their body language. They were as happy to have us there as I was to be there. This was the real deal I thought. It’s times like these that I feel content. I was a little out of my comfort zone and loving it. 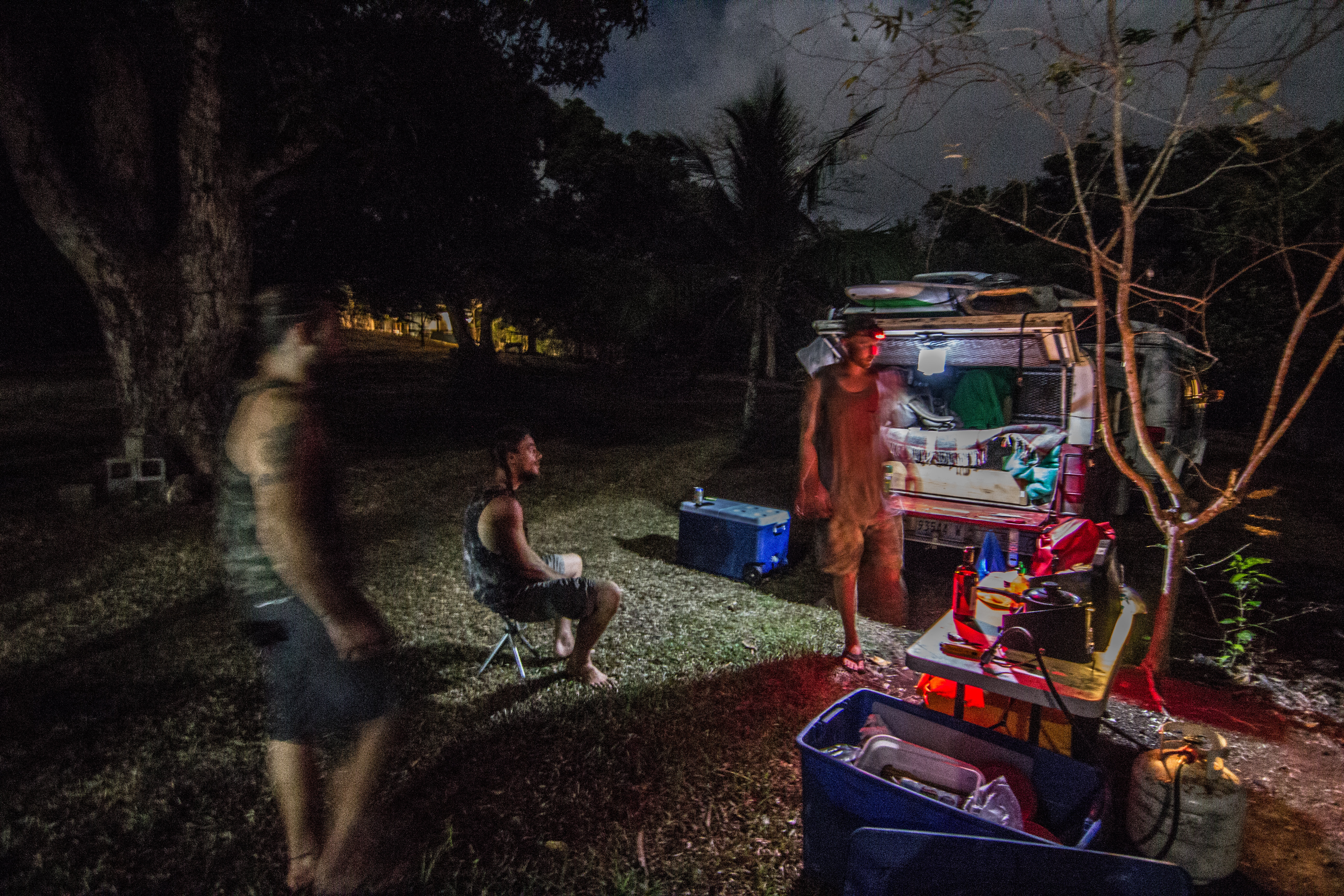 Unloading gear, setting up hammocks, and settling in for the night.

After sitting with Ariel and his family for a few hours we had to head to the van and get organized because we were getting up at 5 to go fishing. The truth is we were still hungry otherwise we would have stayed there socializing for another few hours. So we set up camp kitchen and I started cooking while the boys (and I) passed around a bottle of rum. It seemed like such sweet relief after the cluster fuck of sorrow that was earlier in the day. Here we were camping out with new friends in an insanely pretty part of the world and we were going fishing in the morning. Now I have fantasized about Peacock Bass ever since my buddy Mikey Wier fished for them in the Amazon as seen in his movie “Soulfish.” And it looked like one of the strongest fish pound for pound that you could catch on a fly rod. 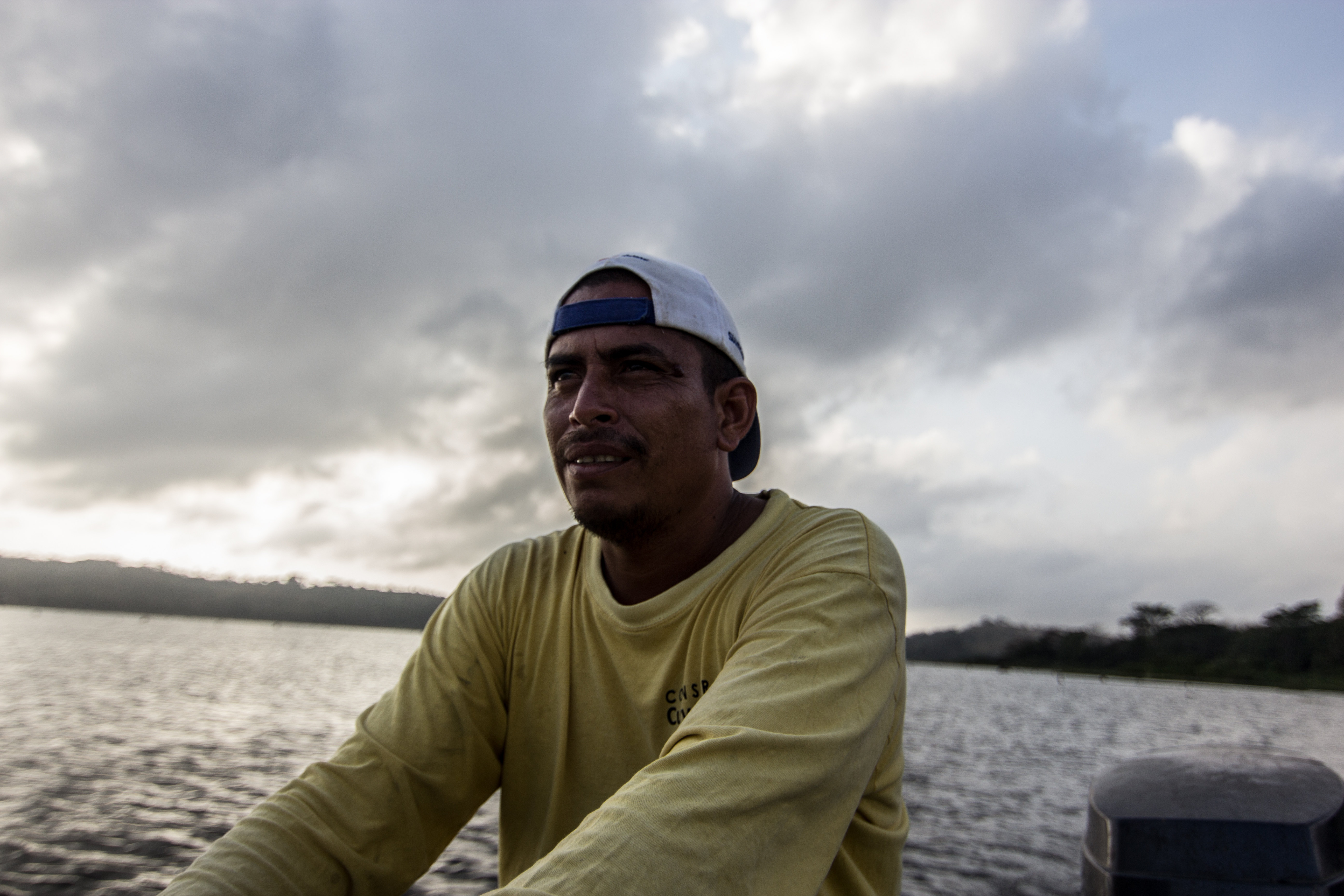 Our guide Ariel knew these waters well as he had grown up fishing this lake with his dad and grandpa.

I’ll never forget the fishing that day. We started out throwing poppers hoping to get a big bass to hit topwater but that just wasn’t happening. I fished really hard for two hours and decided I was changing flies. In the meantime the boys were doing work and had landed numerous peacocks. We sipped warm beers and had a blast catching fish after fish for another two hours. 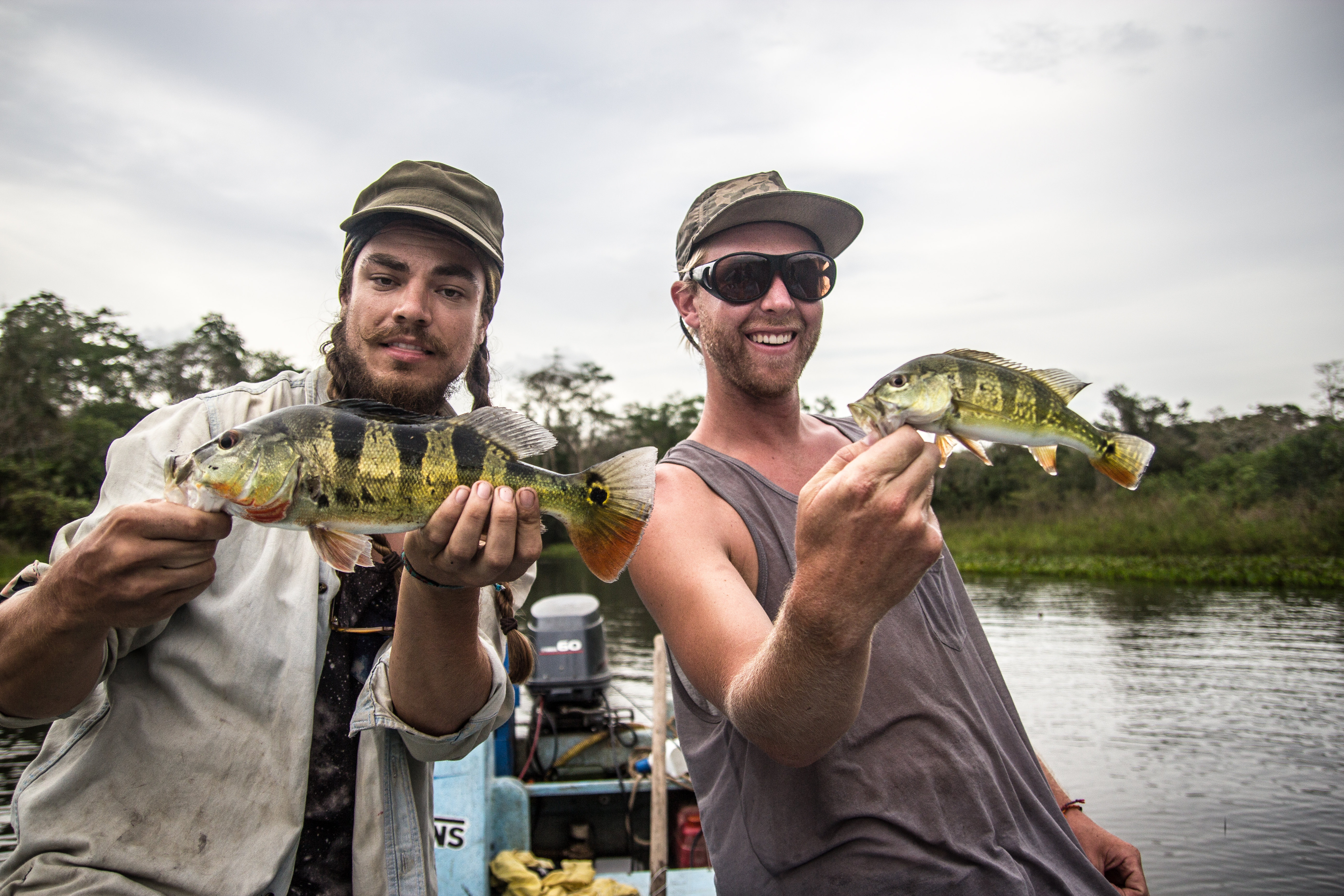 Bear and Jeff with a Panamanian double up. 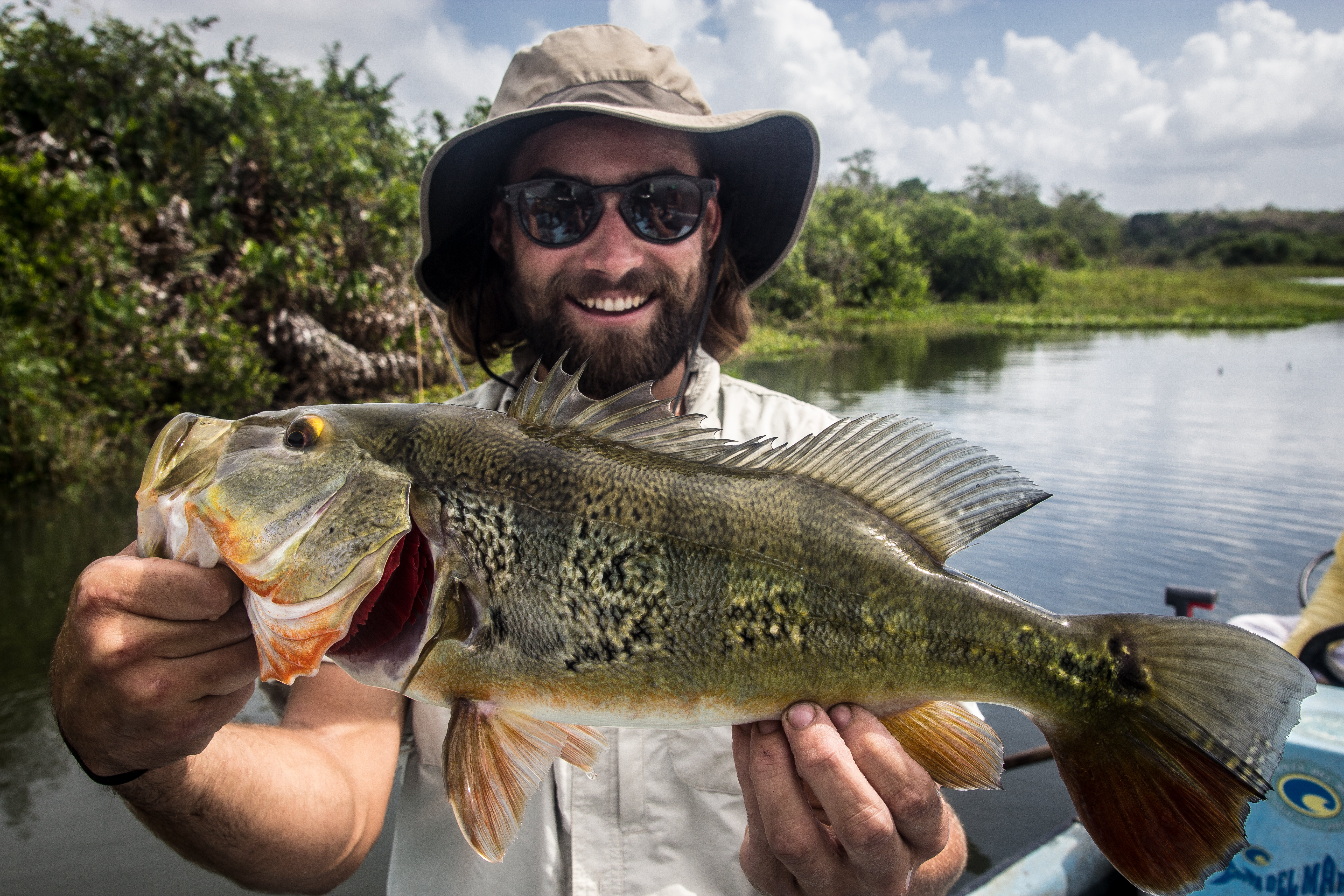 Desi with another respectable peacock. 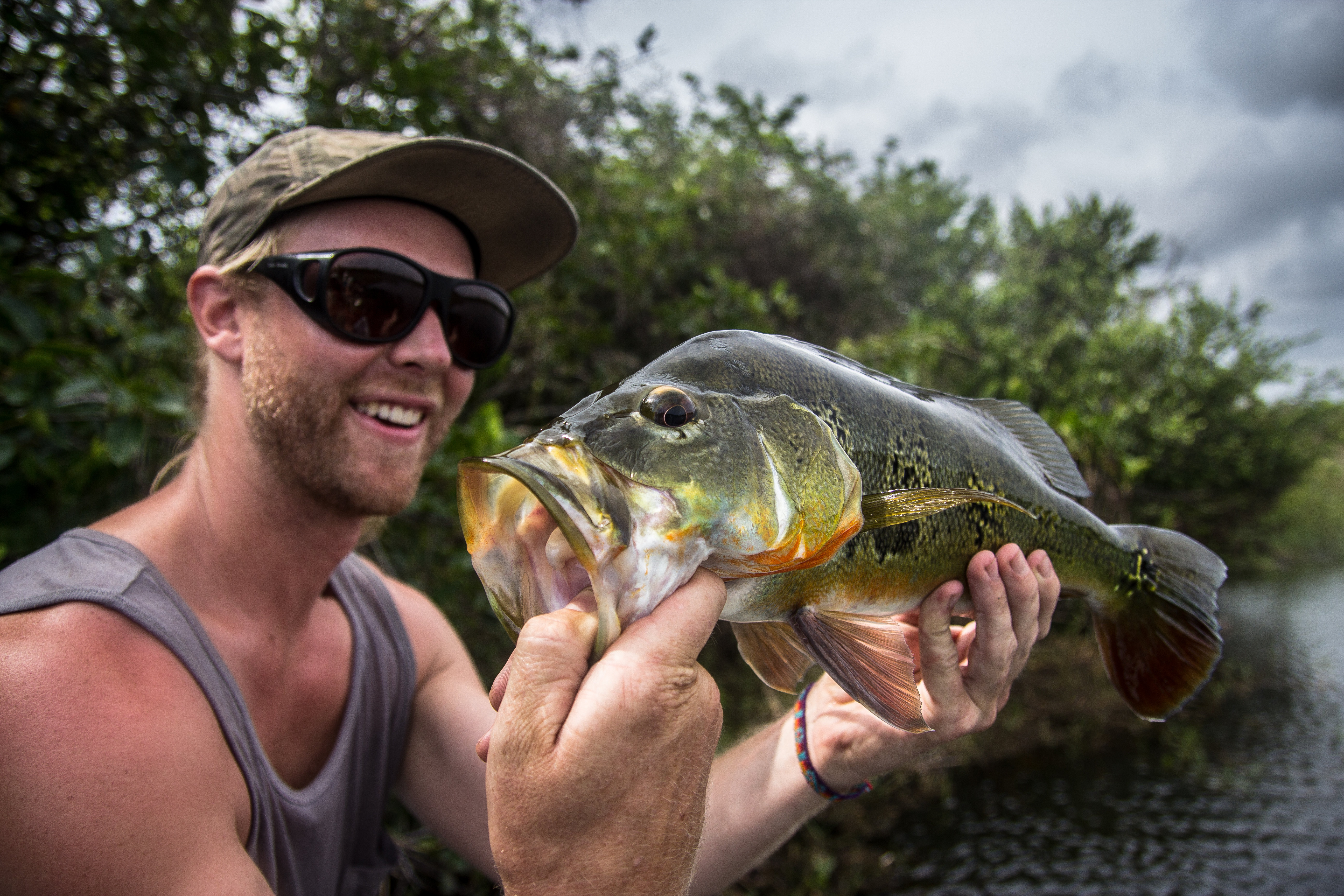 Jeff with his best fish of the day.

It was approaching siesta time and the sun was directly overhead. It was hot and we were out of beer and water. We were pulling into a little cove and I was in the front of the boat. I casted at a log and almost immediately saw a surge of water and felt a sudden pull as a big peacock ate my fly. I put on a hook setting clinic as I stripped hard and pointed my rod down and to the right to do battle with this beast and show him how we fight bass in America. The fish didn’t give me an inch for a good 5 seconds and I was truly testing my tackle now. Luckily I was in control again and a few seconds later I had this fish to hand. Ariel was just as excited as I was when he first saw the beauty of this fish. We lifted him out of the water for a quick couple photos before we released him. 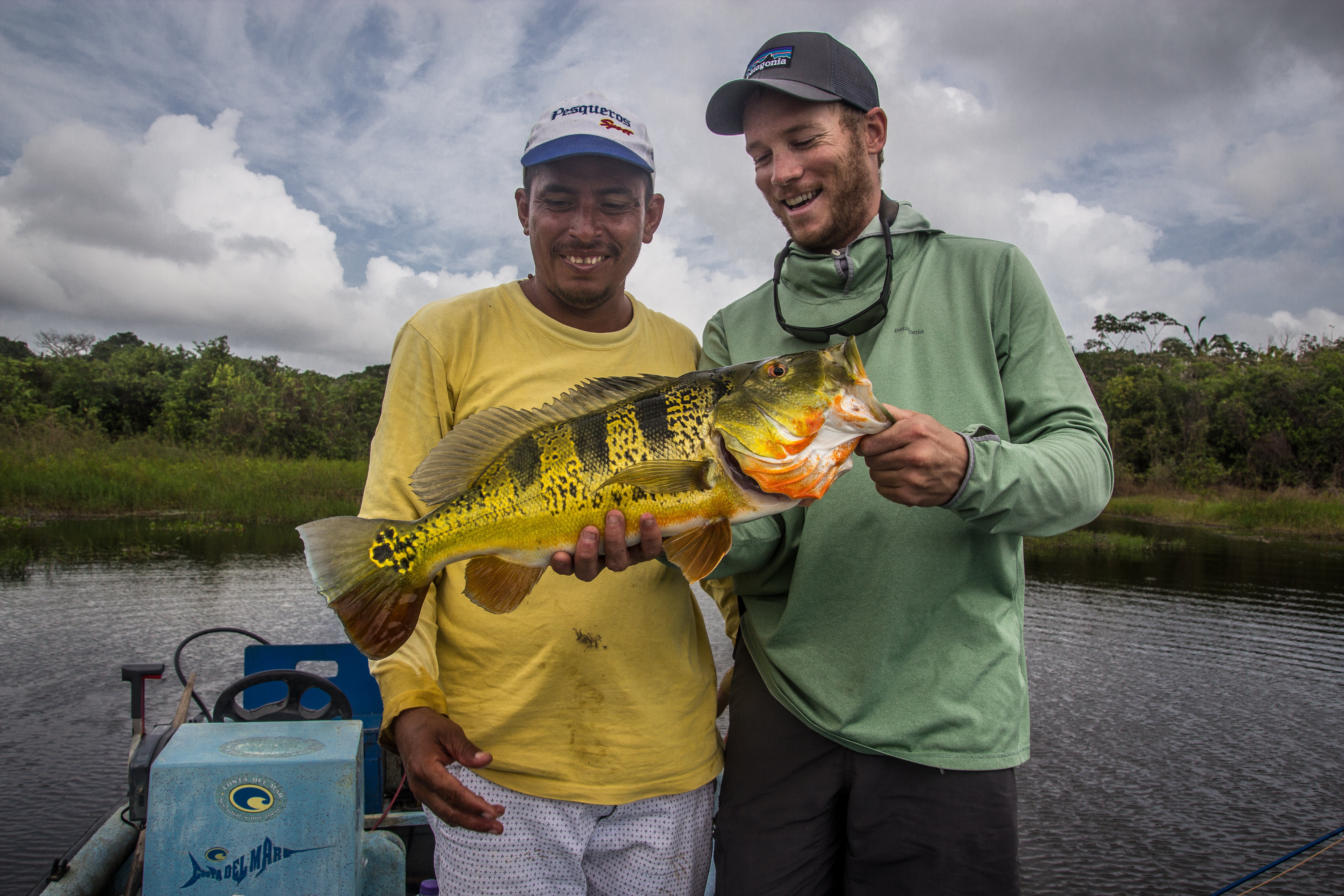 We headed home for lunch and a siesta and our plan was to be back in three hours to fish before sun down. When we got home his whole family was waiting for us and had prepared quite possibly the most delicious chicken soup I have ever tasted. They had obviously killed one of the yard birds for our lunch as grandpa was walking around with his machete while the younger boys were climbing the trees grabbing tamarind for the soup and various other edible plants. It was beautiful. In the afternoon I set up my hammock and had a good hour nap before we were back in the boat again. The afternoon session was laid back as we had more beer and we had already caught tons of fish. We fished until dark and headed back home where we caught a couple baby crocodiles before having a peacock bass feast. We kept three little peacocks so Ariel’s wife and mom cooked up a feast for everyone. We passed around a bottle of rum into the later hours and got to know our new friend Ariel just a little better. Fly fishing will always be my favorite thing. 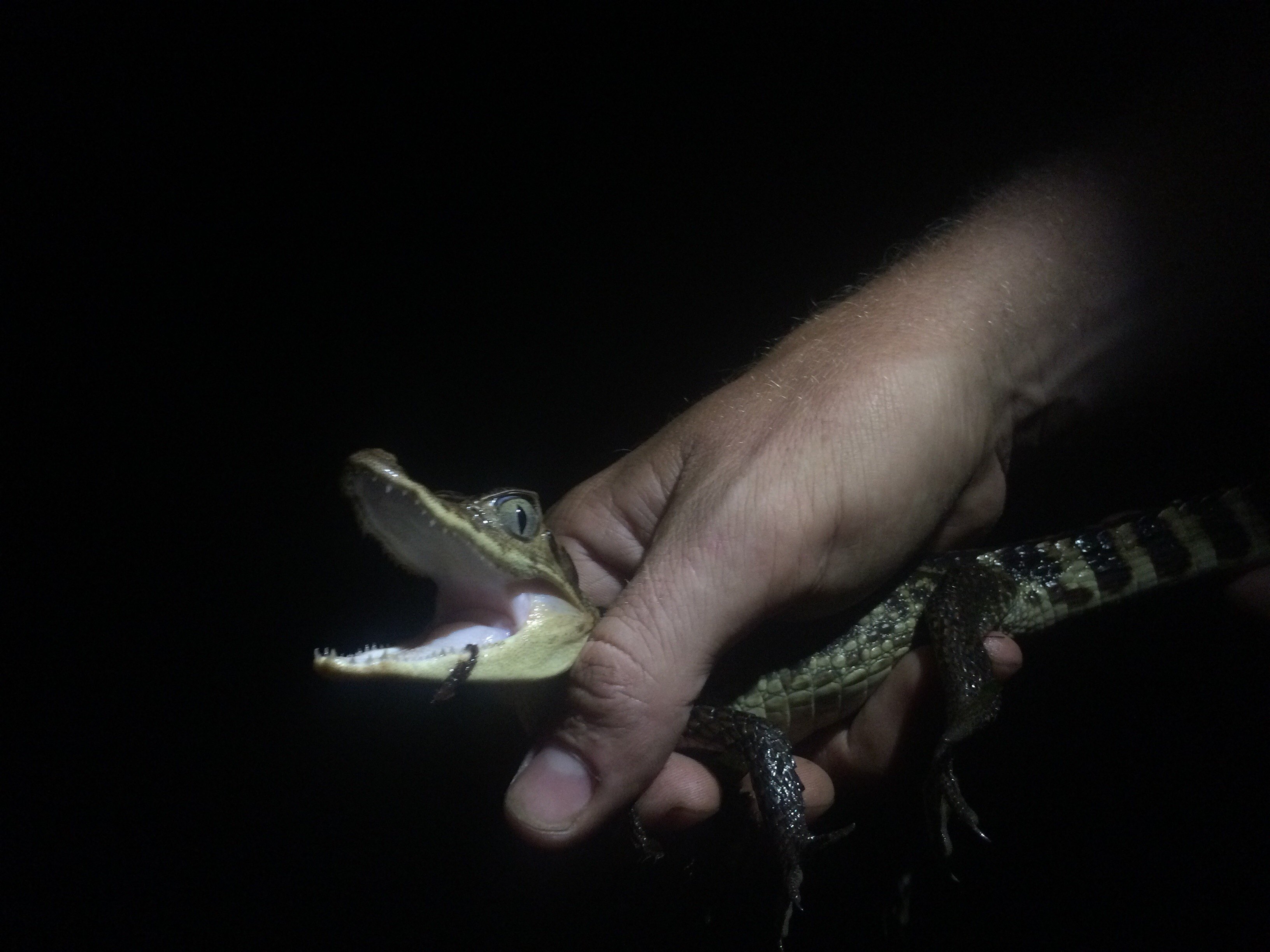