During the first four days of practice for the sheepy tournament my good friend Hollis Bennett joined us as our own personal photographer. I got to know Hollis last year in New Zealand through our mutual friend Jeff Forsee. Have a look back at this old blog post to read about our epic adventure in New Zealand together. 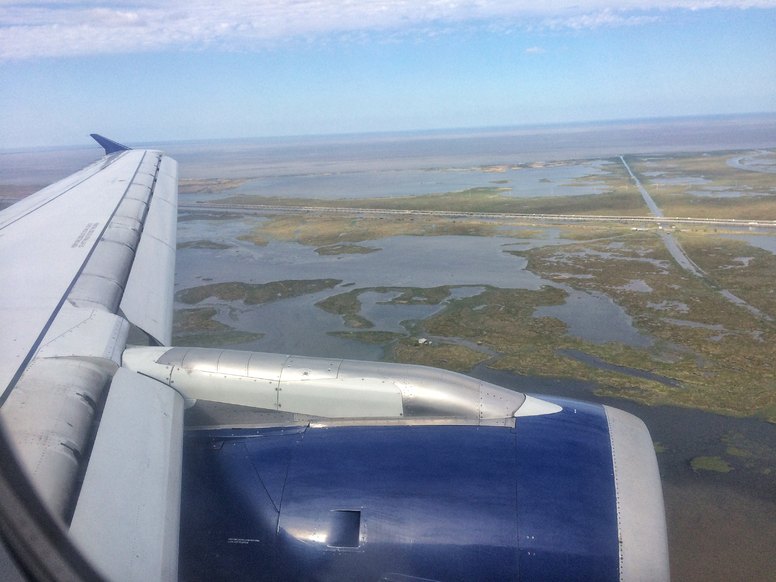 Flying in over the marsh I know I will never see it all.

I had only been waiting in New Orleans for about an hour when Hollis made it in from Nashville Tennessee to pick me up. We drove to Jim’s house and sat around drinking beers for a solid two hours before we went to a proper dive for some more beer and greasy burgers. The next few days were tough. I had a few shots here and there at sheepshead, redfish, and a few black drum but overall it was terrible. The winds were high and the water was very off color so our only option was to get lucky, but that never happened. We put in a good effort and supplemented our time with all you can eat oysters, great Mexican food, a beer or two, seafood jambalaya, homemade spring rolls, and we even woke up late one morning and went out to a famous New Orleans diner for some proper biscuits and gravy.

You never know what’s around the next bend, in this case a big alligator we spooked off the bank. Photo – Hollis Bennett 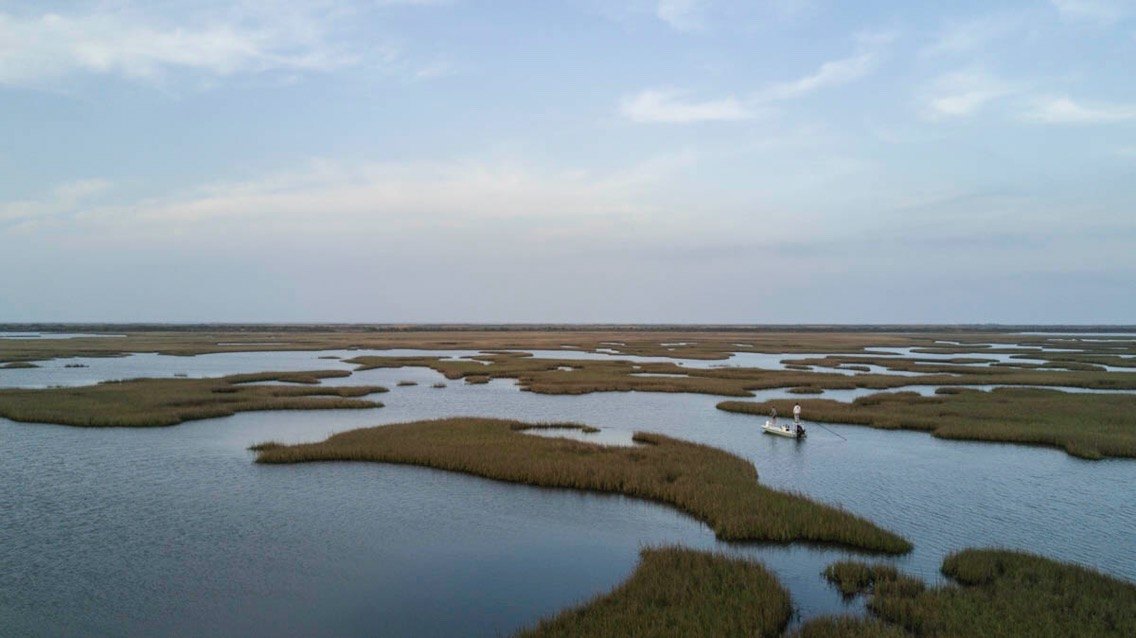 The endless ponds of the Louisiana Marsh. Photo – Hollis Bennett 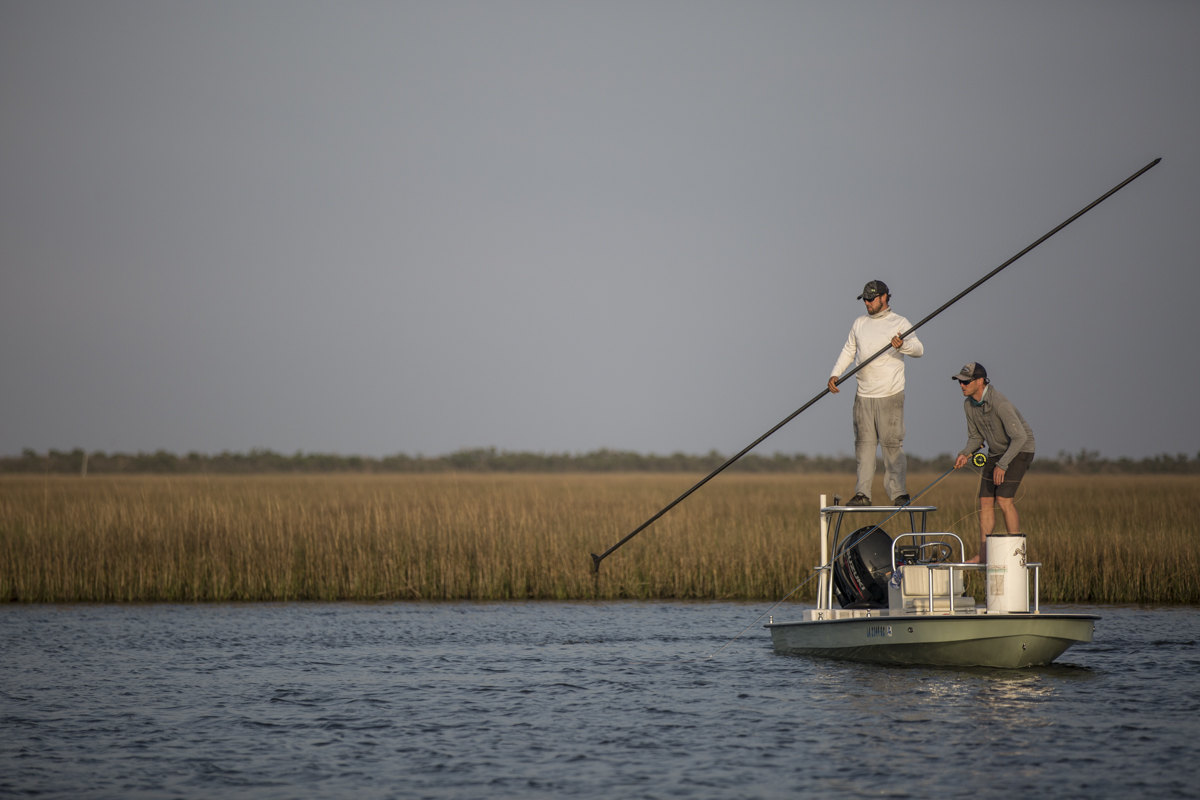 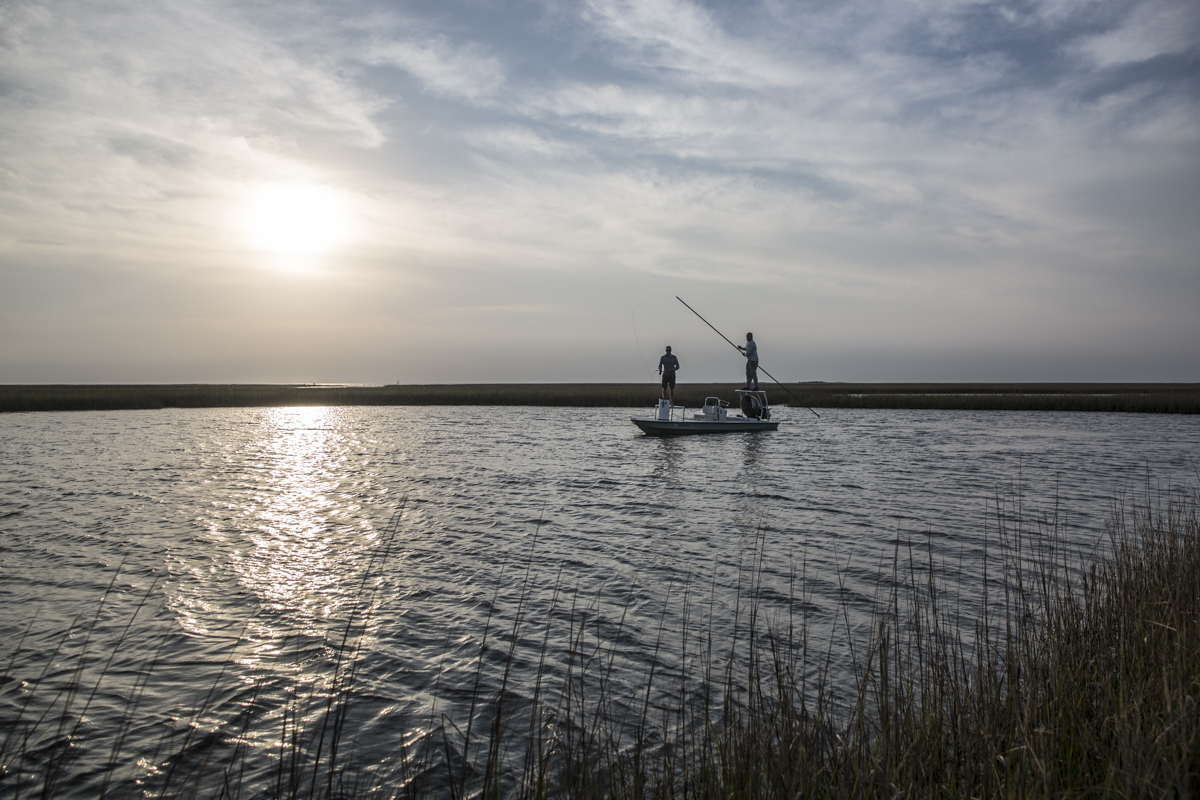 One of the most memorable moments as the wind laid down. Photo – Hollis Bennett

Because the fishing was so slow Hollis decided to leave early which left Jim and I with a couple days to kill before the tournament started. We spent one memorable afternoon fishing the canals in the city which I learned are full of carp. We were walking the city ditches avoiding hooking semis on our backcast and spotting turtles, smallmouth bass, one huge alligator gar, and a lot of carp. We tried hard for a good two hours but eventually had no luck so instead we went home and made lunch. 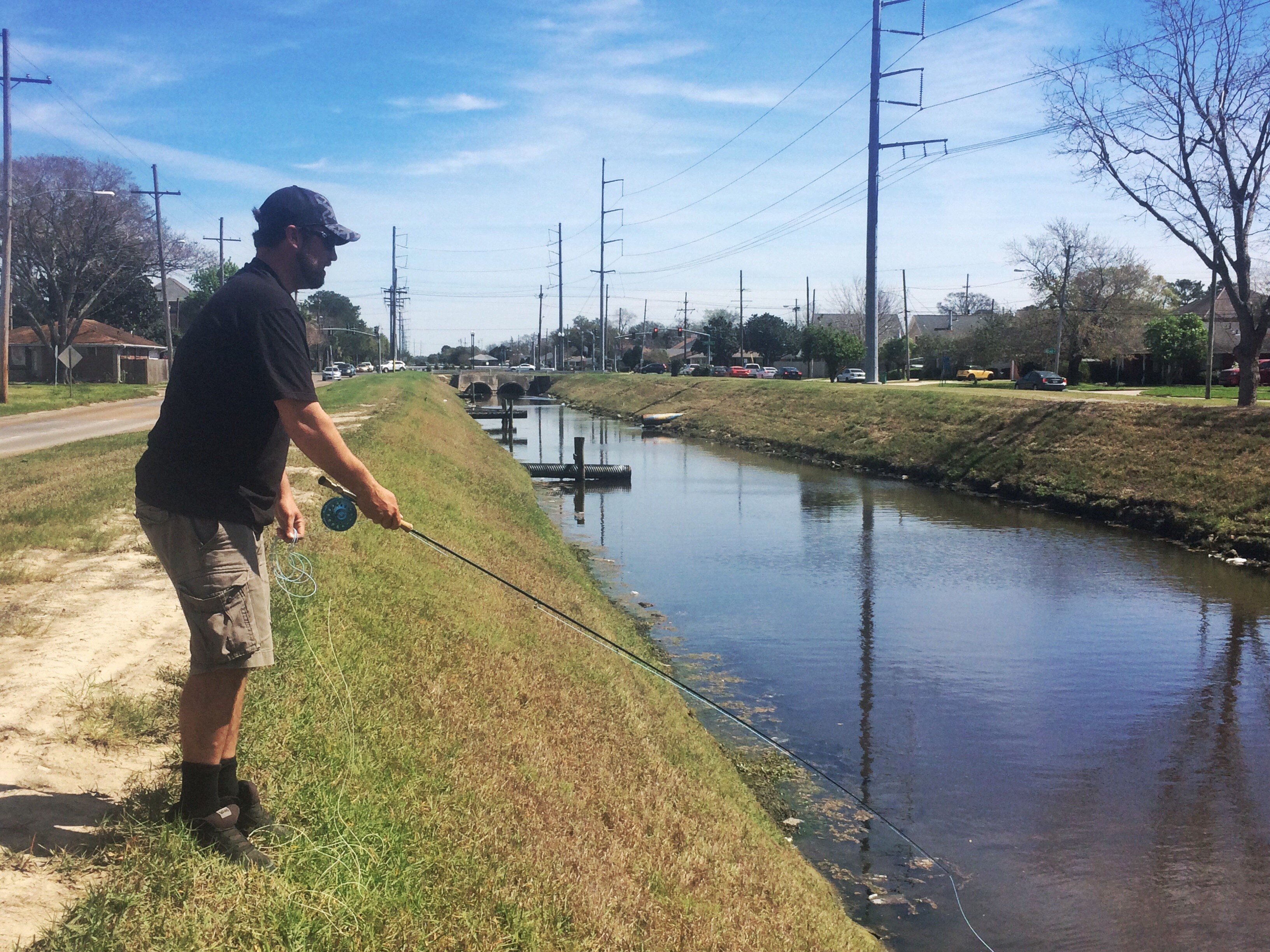 You never truly know what you’re going to find in these inner city canals. Look back at this old blog post to read about fly fishing in the canals of Phoenix Arizona.

That night we made it over to Miles Larose‘s fish camp where the boys had a whole night set up of food, beer, and a big poker game which I lost at terribly. It was actually a mellow night so someone offered the idea to order pizzas while playing poker which became my job since I had lost my 40 bucks in the first 10 minutes. An hour went by and still no pizza so I called back and she said the driver was 10 minutes away so we waited another 20 minutes until I got a call another hour later from the pizza shop saying our driver had been pulled over and arrested so we decided that pizza was not in the cards if you know what I mean. 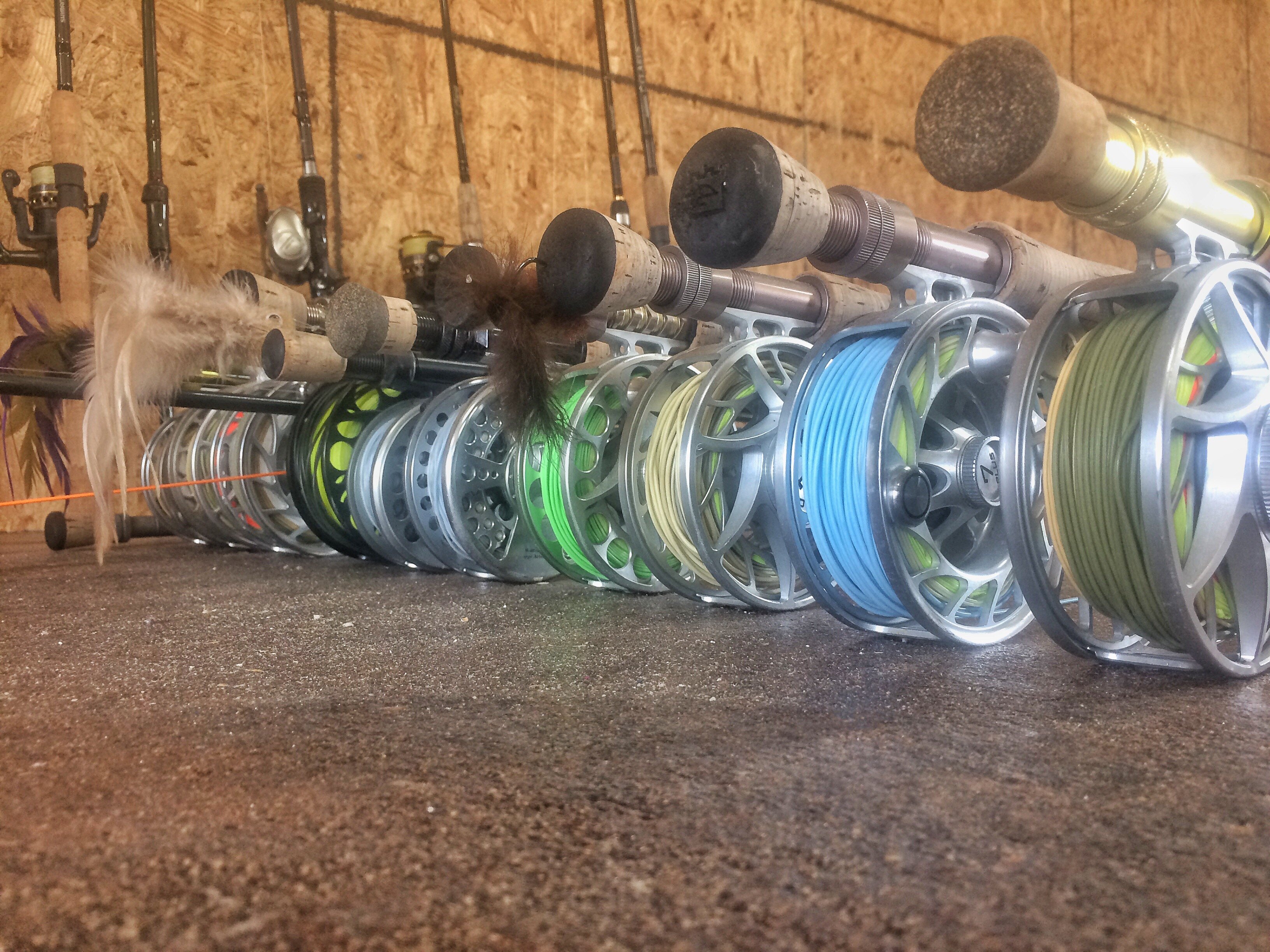 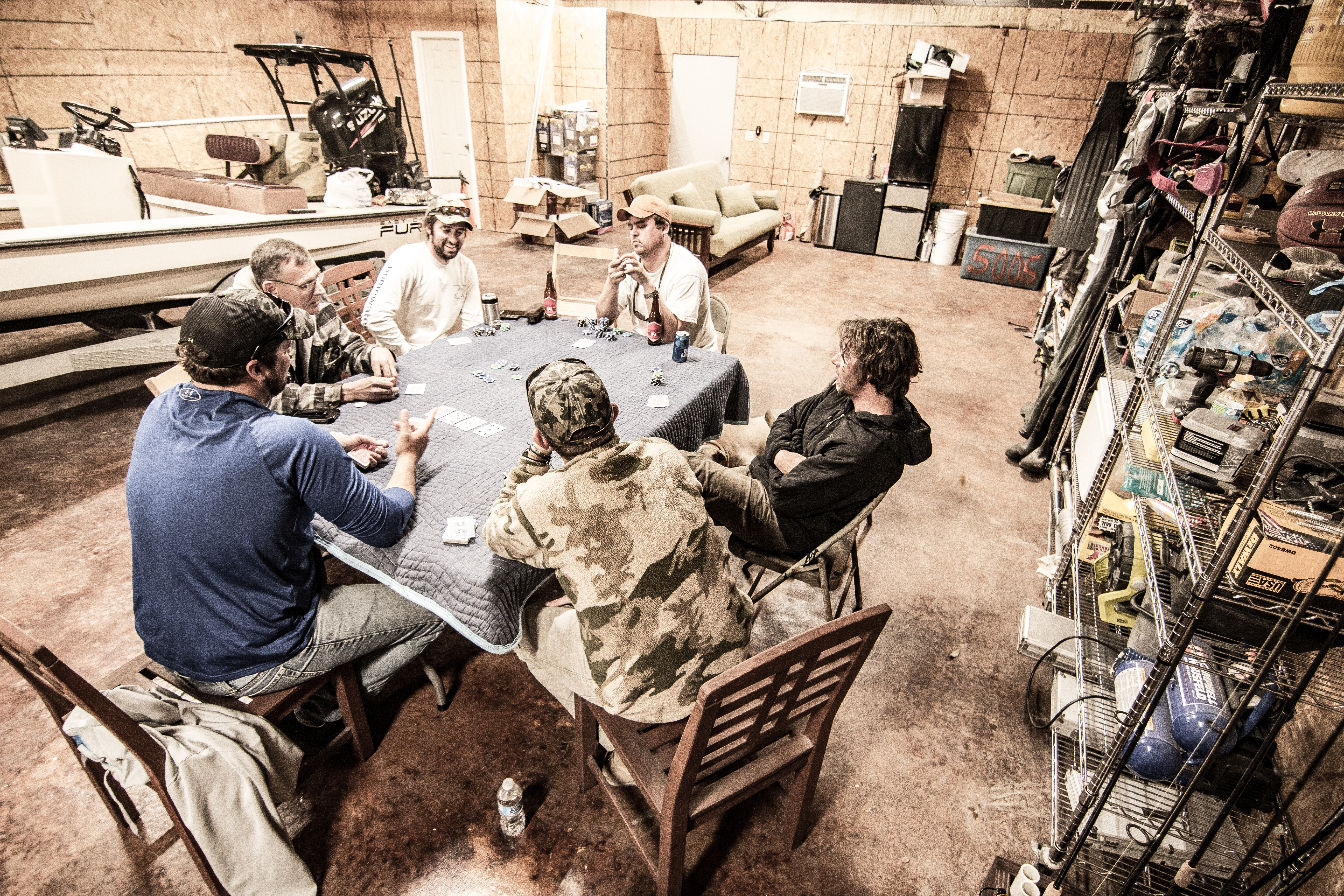 All night poker games are expensive I learned. 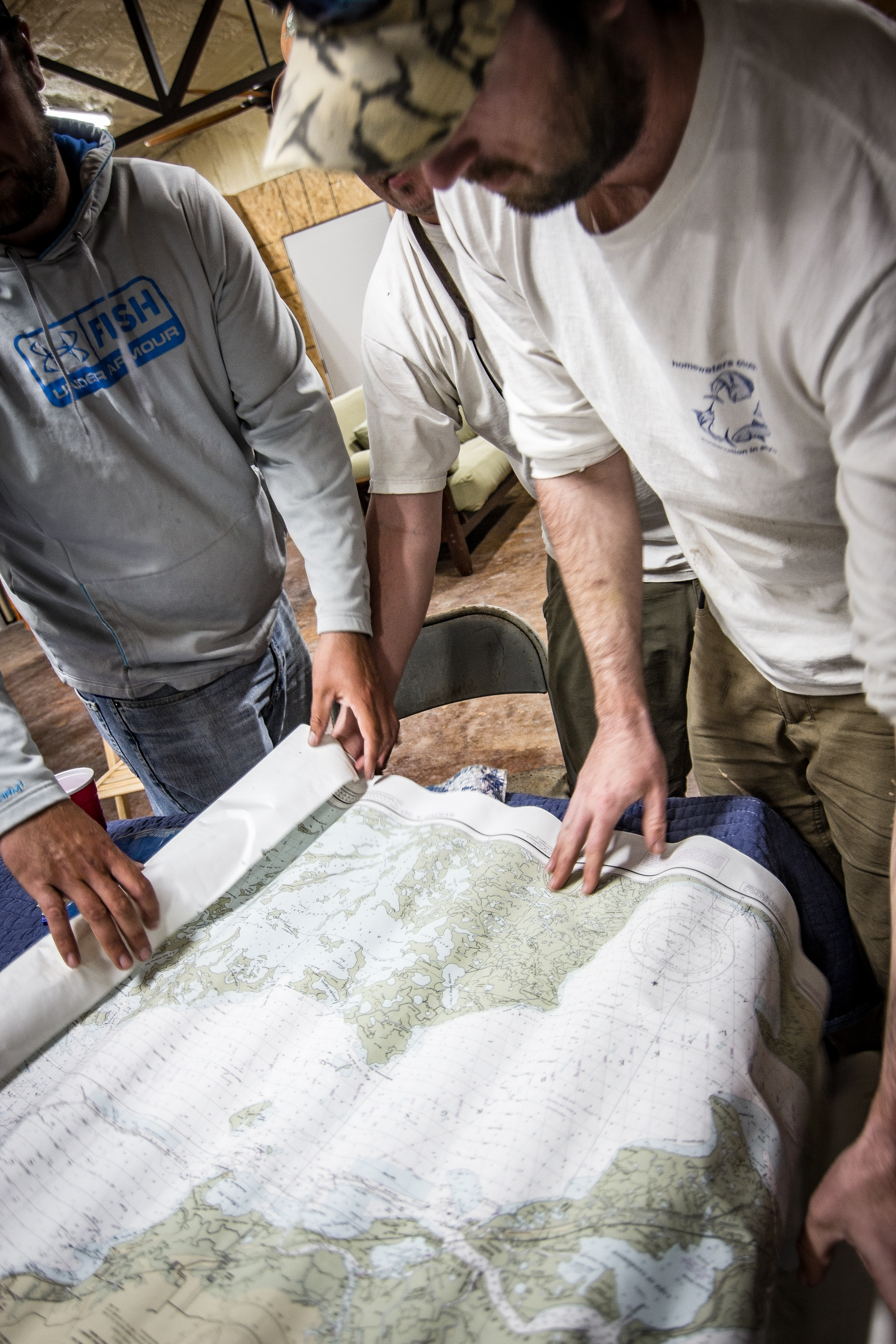 Eventually we got down to business and talked about sheepy strategy. 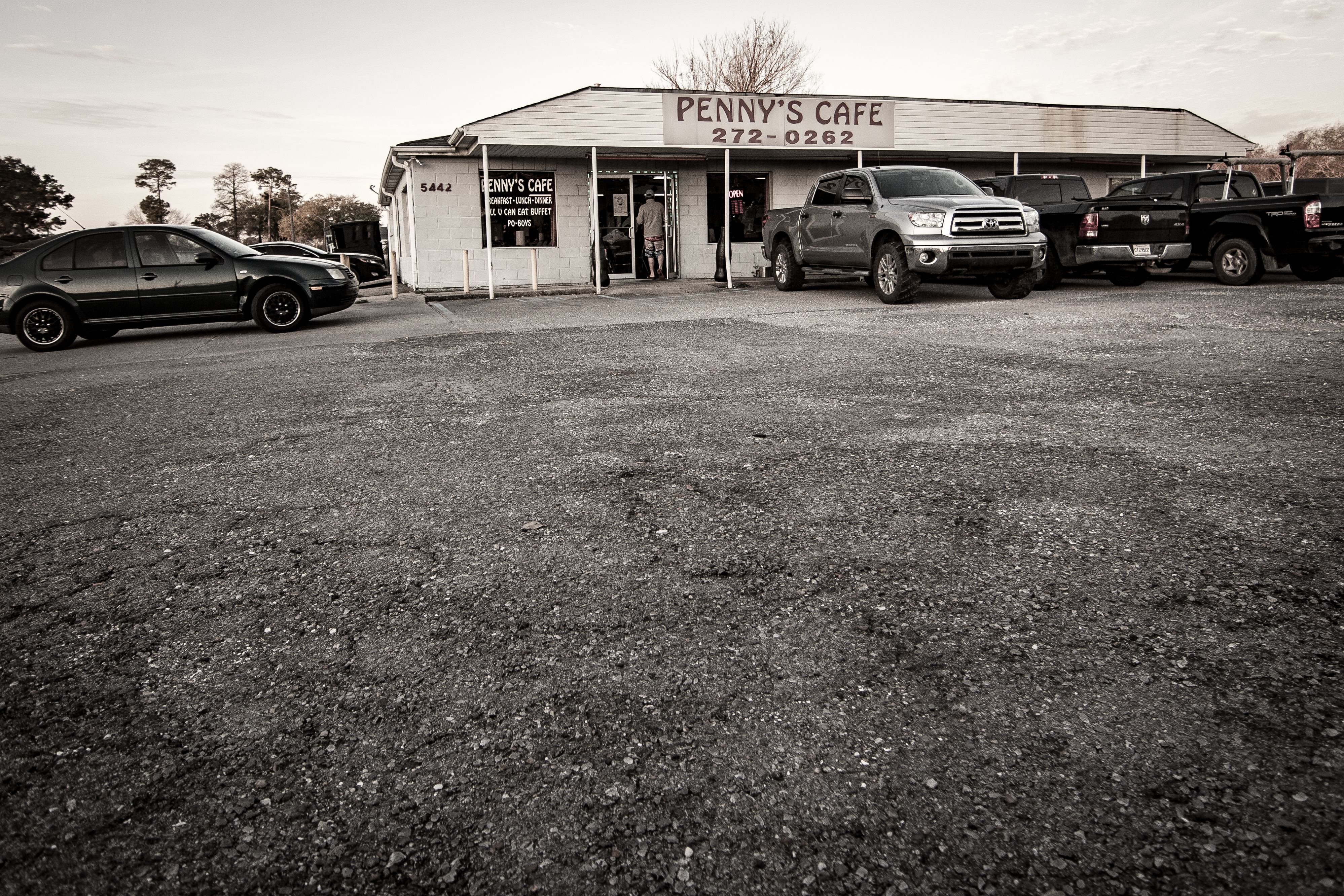 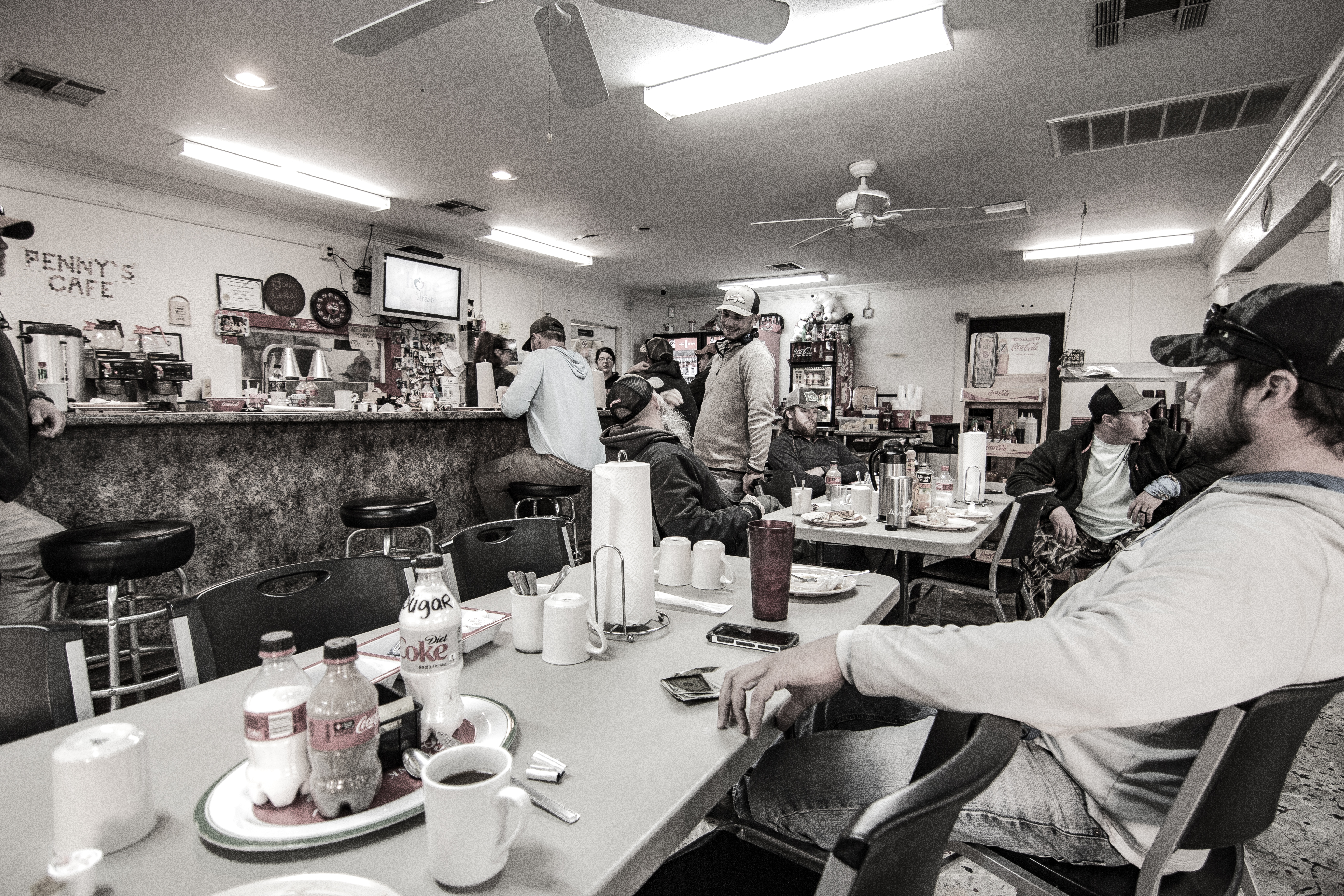 Captains meeting to talk about rules and drink coffee.

The next morning couldn’t come quick enough. We started at Penny’s cafe where we had a captains meeting to discuss rules and eat a quick breakfast. Eventually we were all driving to the boat launch and rigging gear and dropping the yachts in the water. When the horn sounded it was quite the show as 10 boats all gunned it for the best water. Jim and I had a plan and stuck to it. 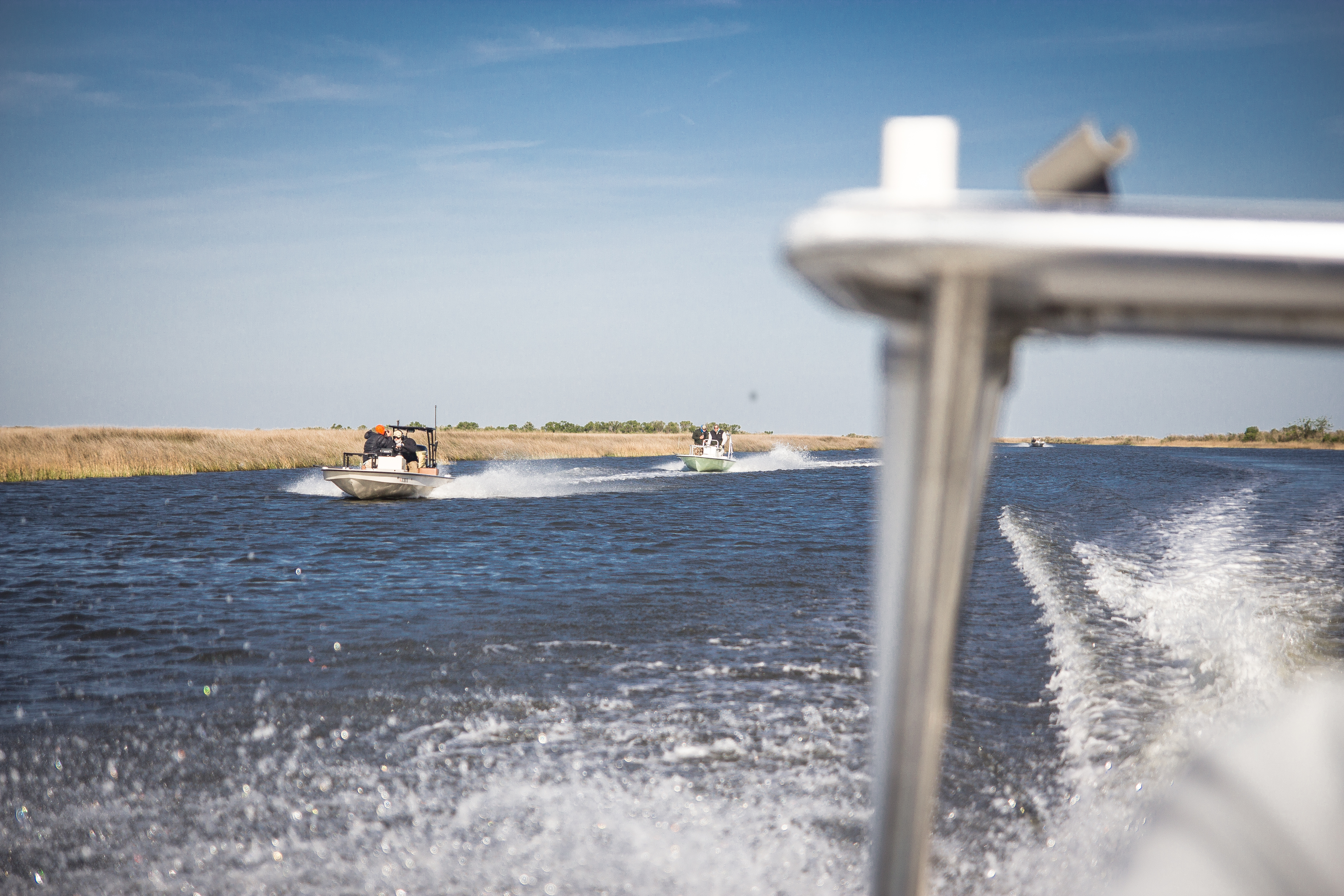 It didn’t take long to secure a spot in the line up and before I knew it we were on the lee of a little island, polling with the sun at our backs. We only had a few hours of sun and no wind so we tried our best to make the most of it. Almost immediately I saw my first redfish of the day. During this tournament though, the smallest redfish of the day and the redfish with the most spots both earn prizes so I casted at everything. Before too long I had a very respectable redfish to hand. 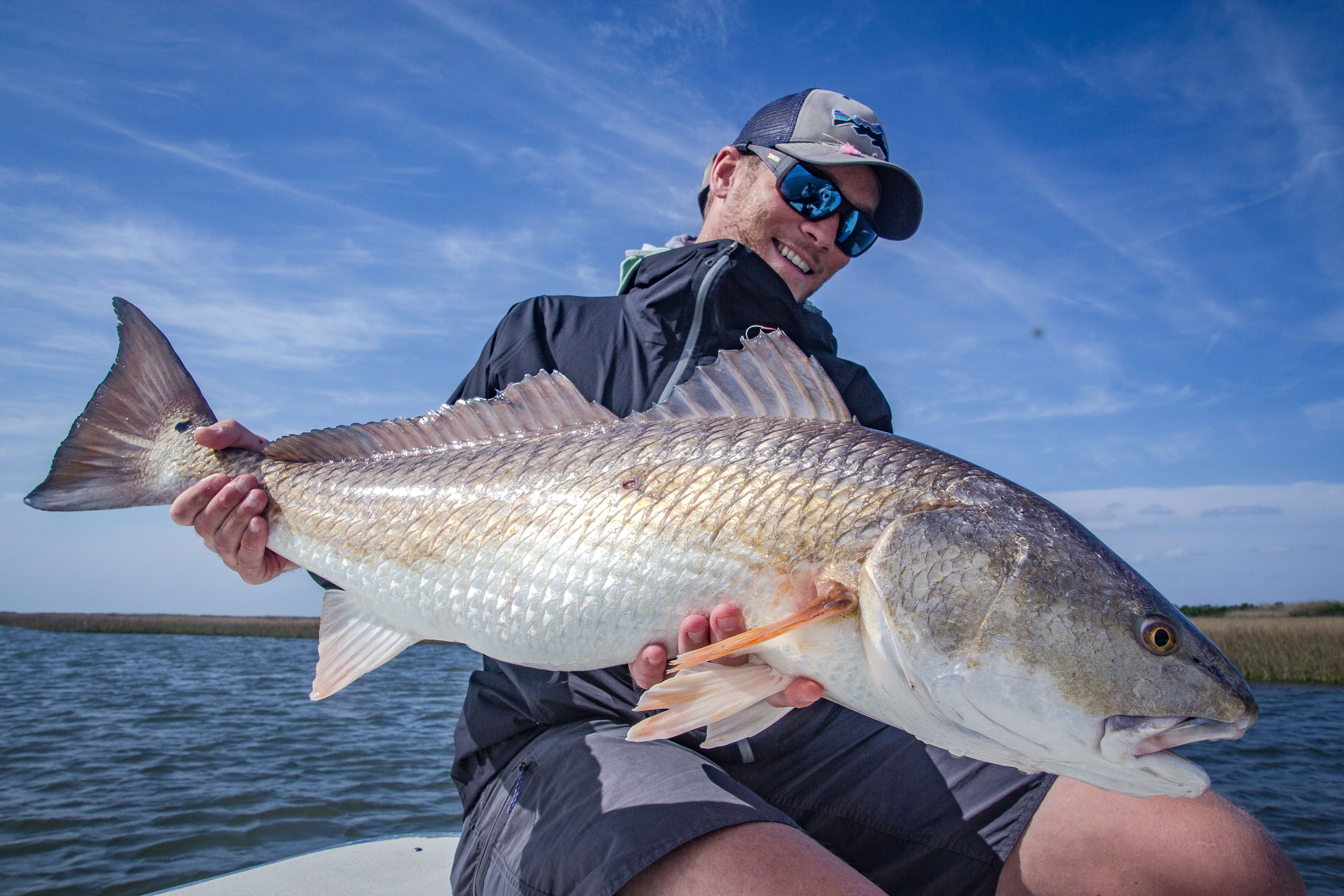 Too bad there was no prize for biggest redfish!

I had the worst luck ever that day because for the next few hours I saw four sheepshead and a ton of redfish. It was too bad we weren’t in a redfish tournament because it would have been downright funny. Anyway, I’ll never forget the one sheepshead that I did catch that day. We were quietly moving down a grassy bank and I saw a flashlight blink in the water. It was a sheepshead mudding the bottom so I casted perfectly and watched his every movement. The fish swam over to my crab oblivious to the boat and tailed on it. I started stripping and stripped and stripped and didn’t feel anything until the sheepy spooked off. I wanted to scream but kept my composure (sort of, ask Jim) and was ready for the next fish when just like that another sheepy showed within casting distance. You should have seen me out there, my next cast was right in the fish’s view so I gave it a little tick and got its attention and slowly gave it another then left it. I waited for it to tail on it then, like one jerk waiting for another I crossed his eyes with a good hook set and felt the fish take off. I cleared my line, tightened my drag and played the fish for 2 minutes until the hook popped out randomly. Sheepies, are full of rows of human like teeth so getting a hook to penetrate is very hard. My heart sank and I wanted to dive in after it. That was our last shot at a sheepy for the day as time was up and we had to get back to the mothership. 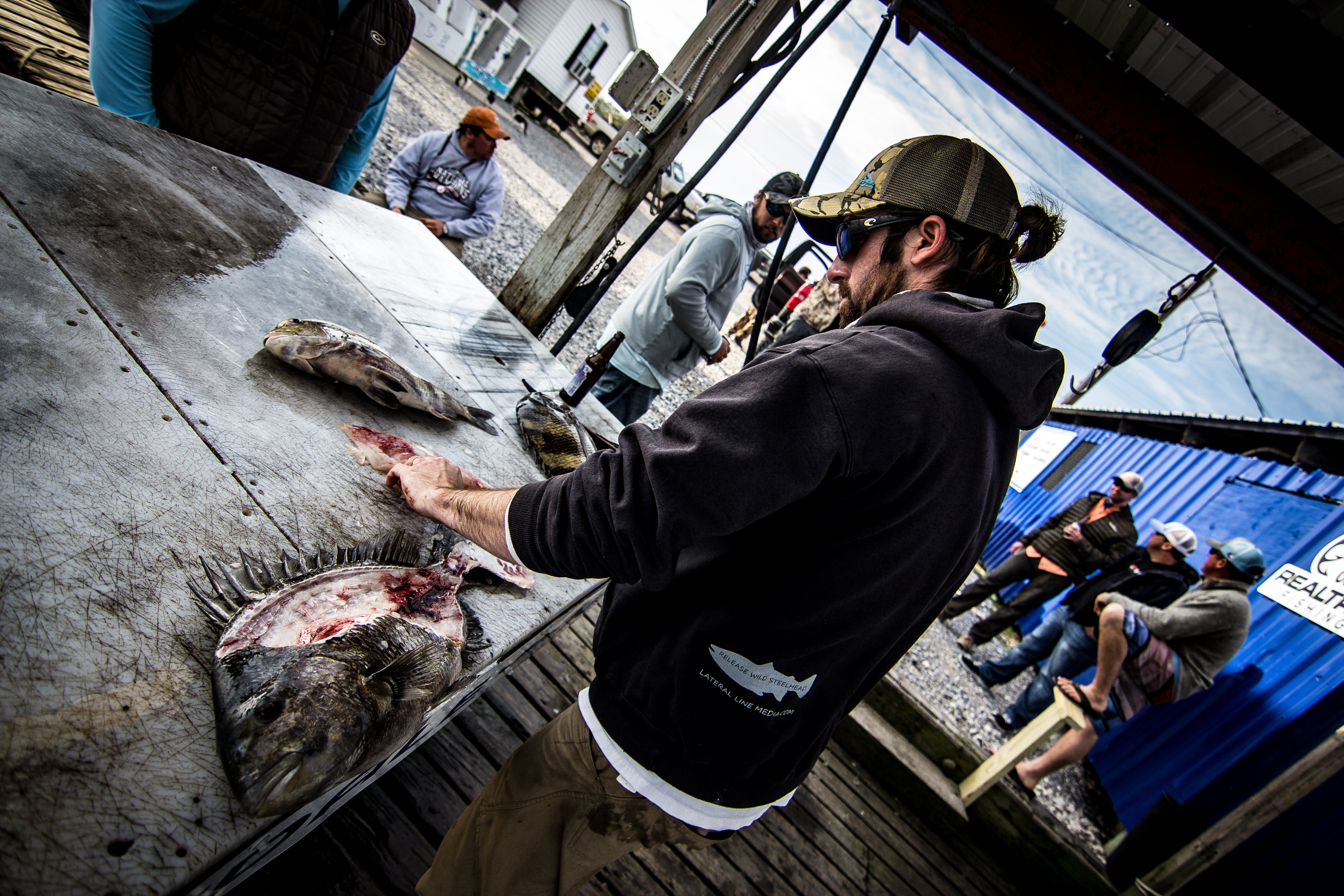 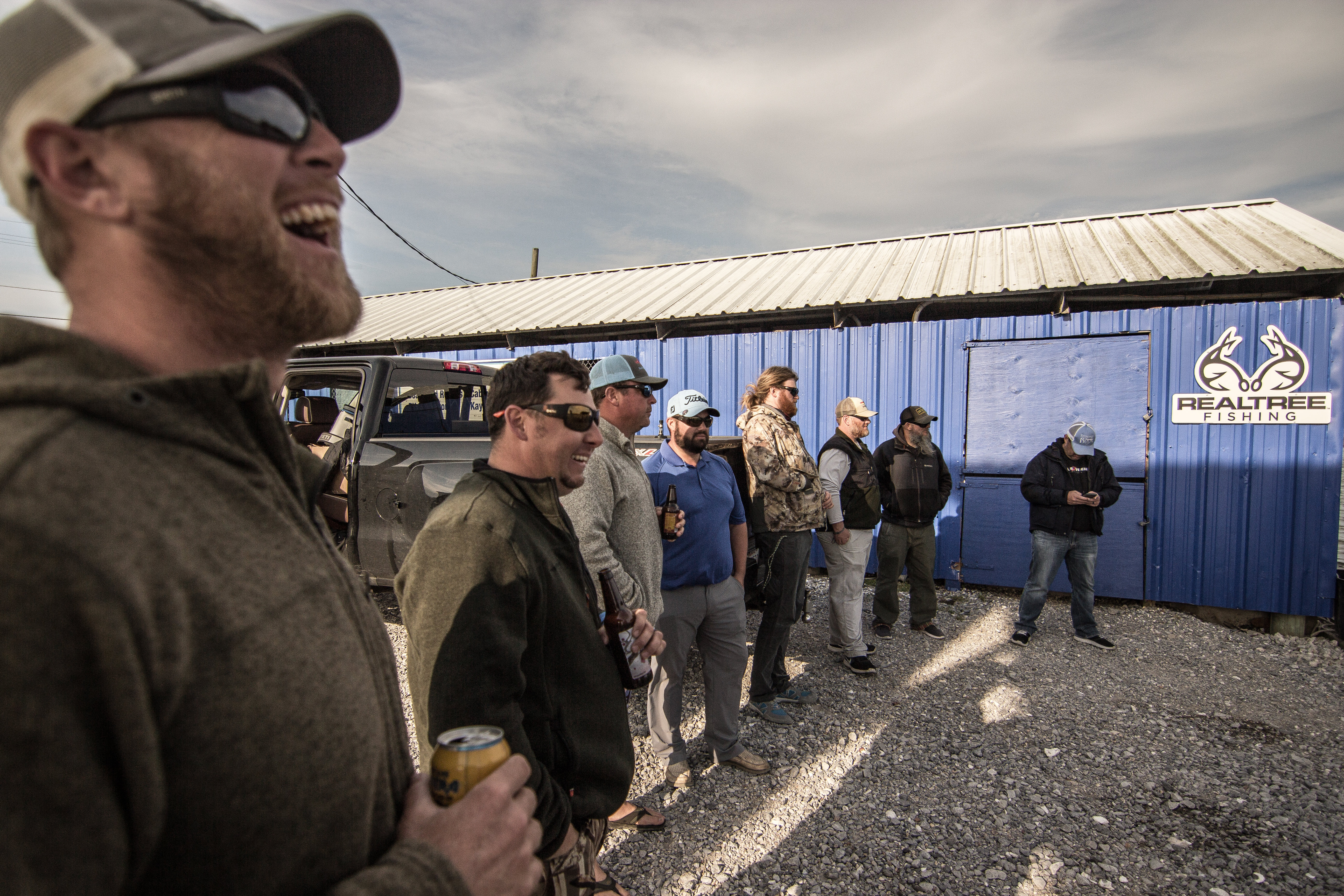 After weigh in the folks at Penny’s cafe had put on a massive crawfish boil at the marina. It was my very first crawfish boil and I felt like partying away my guilt and drowning my sorrows with booze. After all I was surrounded by a bunch of great people and was having the time of my life in the South. It was a night to remember. It went on for many hours and there were moments of arm wrestling and fish pictures, there were late night bagel bites being passed around, there was even an open bar that I declared myself bar keep at. There was a late night casting tournament that ended with a broken rod and fly line I’m pretty sure. It was a tremendous night with new friends in an amazing corner of the world. 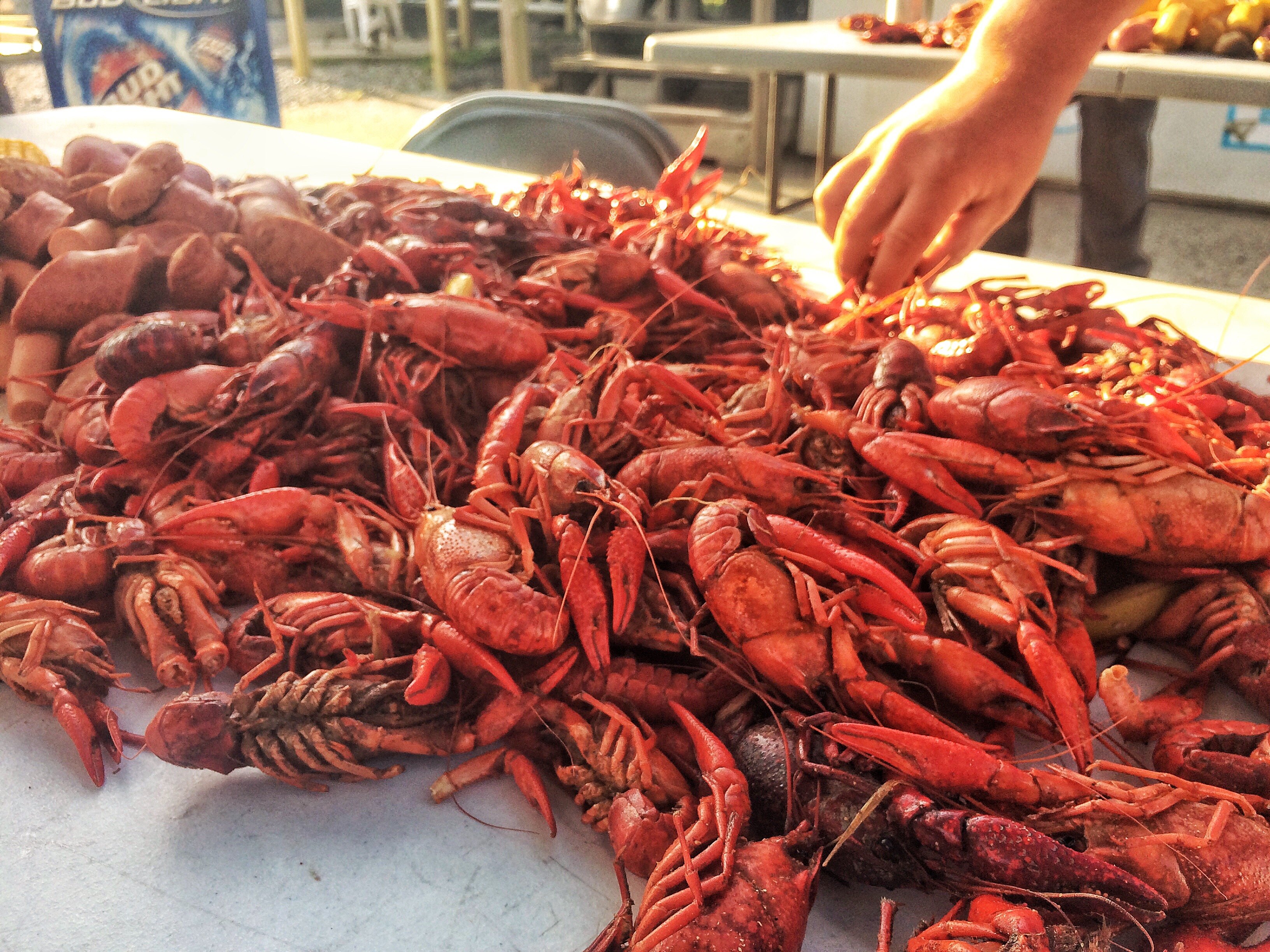 My first ever crawfish boil!

As you imagined the next morning was rough. Jim and I fished hard the next day but didn’t manage to catch a single fish. We eventually called it off and headed back in as the wind had really picked up and we were sort of over it. We went back to Penny’s for the awards ceremony and more beers. Penny herself was there and had breaded the sheepshead that were caught and fried them along with some fried okra and potatoes. Jim and I eventually wandered on home and parked it on the couch for the rest of the night.

What an epic few days! Thanks to Captain. Jim Dietz of mountains to marshes for hosting me and guiding me in the 2017 sheepy fly fishing tournament! Let me know if you want to be part of this amazing event next year!